At the end of 2019, I bought the two-volume scholarly edition of Walter Benjamin’s Berliner Chronik/Berliner Kindheit um 1900 [Berlin Chronicle/Berlin Childhood around 1900]. I had remembered it as a small volume and was surprised by the background to its genesis. Originally written in 1930, Benjamin kept revising the various Pieces, as he himself called them, during the years of exile. Therefore, different versions exist, partly because—despite intensive efforts by friends like Theodor W. Adorno—Benjamin never found a publisher.
Of course, while reading I was reminded of my own Berlin childhood. This was around the 1960s, but in Walter Benjamin there are certain descriptions that were quite familiar to me. The pantry, the special small of baked apples, the noisy atmosphere of the beer halls. These things had not changed all that much.

A different thing, however, were the ruins of destroyed houses in between the new buildings, which seemed like alien objects. They had a different, inexplicable presence and attraction. Nonetheless, “kaputt” was the suitable term, even though a lot of construction went on. Maybe that’s why the apartments in the neighborhoods with new buildings were in such high demand; today they are socially troubled areas, ghettos.
Often, on my way to school I held a piece of a broken brick in my hand, a Klamotte, and drew lines on the walls of buildings. Of course, with interruptions, when I was being observed and had to run so as not to get caught. It was fun though, the orange-reddish colored line looking especially good on the freshly plastered new buildings. If the lines were wavy, I was probably whistling or making up a story while I walked. There were also interruptions, because in between there was always rubble of walls or burst reinforced concrete pillars.
Initially, the “modern” decorations on the walls of the new buildings, painted or mosaics made of tiles, seemed a little strange, as did the abstract sculptures that appeared increasingly on squares, in parks, or in front of the new apartment buildings. Some of them were at least good places to sit, climbing was also possible. But mostly, they were simply in the way, but then became part of a familiar environment, and over time they stuck in one’s mind. Usually, I threw the Klamotte into the canal from a bridge and watched how it created a few circles in the water.
At any rate, it was far more interesting to walk to school, and then to dawdle on the way home, than to take the tram or be driven by car. At the time, a policeman regulated traffic on Hermannplatz, there were no traffic lights yet, and at Christmas, drivers placed schnapps before his pedestal to say thank-you and as protection against the cold. Going into Sonnenallee from Hermannplatz today would seem like a fairy-tale world from the perspective of this time. 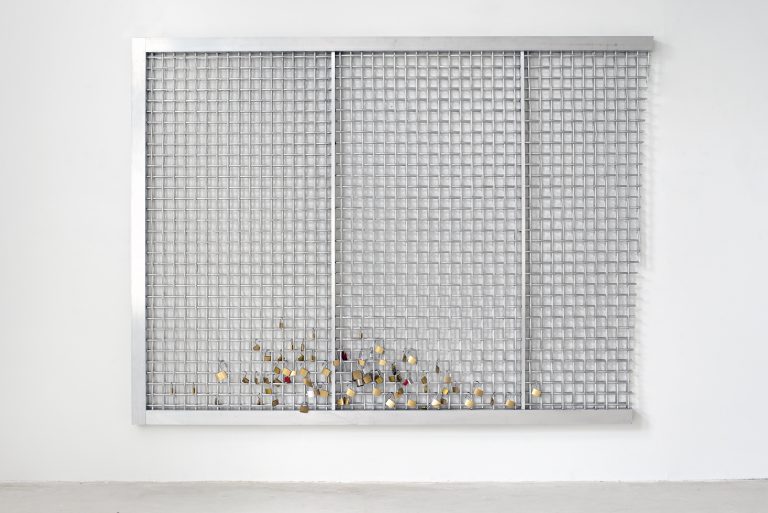 In fact, everything then was a kind of gray, the weather included, especially during winter it didn’t become properly light for months on end. A palette of dirty shades of gray. In the older buildings, many windows had ice on the inside, you could see who had coal to heat with and who didn’t.

For this time of the year, we had a Stabilbaukasten at home [in the U.S.: Erector Set], consisting of narrow perforated metal beams that could be screwed together with also perforated plastic sheets. An endless toy construction set was an absolute hit then. According to the instructions, the content was meant for the creative construction of cranes and technical devices, but it was also possible to pile up boxes–screwed together–and bend them. The material was pretty labor-intensive, and thus time-consuming, so that in my case the system of boxes more likely than not ended up as crushed cubism.

At the beginning of the 1960s, my older brother took me to the cinema for the first time. We wandered along the Berlin Wall, which had increased the dreariness even more, towards Tiergarten. The large white wooden boards with the black inscription You are leaving the American sector had really become superfluous. The film we saw was called Mon Oncle by Jacques Tati, and the cinema was the Kongresshalle, today the Haus der Kulturen der Welt. I was simultaneously baffled and elated by the architecture and the film.
I had a similar experience at the end of the 1960s—then a teenager—at Neue Nationalgalerie. It had just been opened then. On school field days, and in order to increase the visitor quota, whole classes were herded through. Not just the architecture, also a painting by Mark Rothko were quite something.
Everything red except for the blurry edges, and then the title: Nr. 5 (Reds), I thought, what’s that about? At any rate, no gray… It was my first visit to a museum.

Childhood patterns as a program of contrasts—the cause and point of departure for a new series of sculptures using various techniques and materials.

Olaf Metzel has had numerous international solo exhibitions, and has also participated in documenta 8, Kassel (1987), Skulptur Projekte Münster (1987 and 1997) (both Germany); Sydney Biennial, Australia (1990); Istanbul Biennial, Turkey (1995 and 2017), and the Sao Paulo Biennial, Brasil (2002). Sculptures in public spaces can be found in Germany, Europe and Asia. He curates exhibitions and publishes articles in magazines as well as newspapers.

+49 (0) 30 4849 3600
READ ON
Exhibition walk through with Olaf Metzel
WENTRUP
In conversation with John McAllister
WENTRUP
MEET ...
Jan-Ole Schiemann
WENTRUP
SUBSCRIBE TO OUR NEWSLETTER