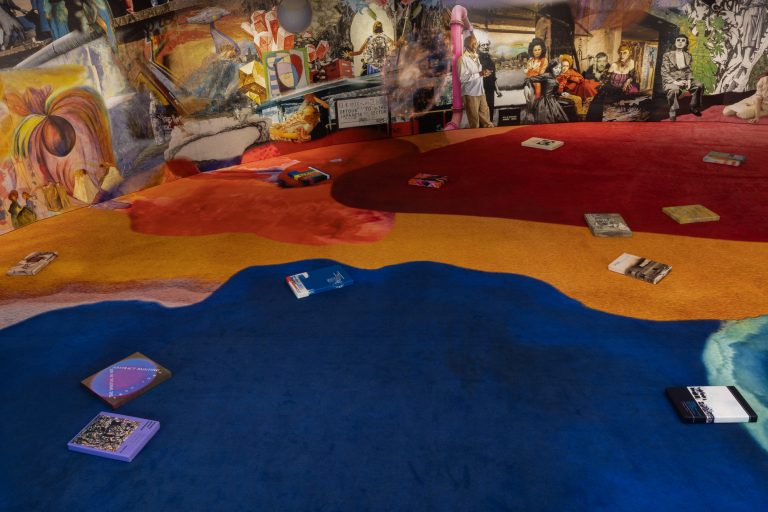 Esther Schipper is pleased to present Panoramism and the Abstract Sector, Dominique Gonzalez-Foerster’s tenth solo exhibition with the gallery. On view will be a captivating environment that includes a 30-meter long 180°-degree curved panorama, especially conceived for the exhibition, its imagery spilling over onto a custom-printed carpet, with printed pillow books.

Panoramism and the Abstract Sector continues the artist’s creation of an artistic, emotional and intellectual genealogy, begun at the Vienna Secession in 2021 and at the Serpentine Galleries this past summer. Comparable to an act of media archeology, Dominique Gonzalez-Foerster (DGF) has reimagined the panorama as a medium that transcends contemporary image culture and reconnects to the legacy of early 19th century formats (this also includes, the diorama, a form the artist chose for her 2009 presentation at the Dia Art Foundation in New York). DGF reinvents these still precursors to early cinema, restoring their visual splendor and excavating their discursive power as storytelling devices. 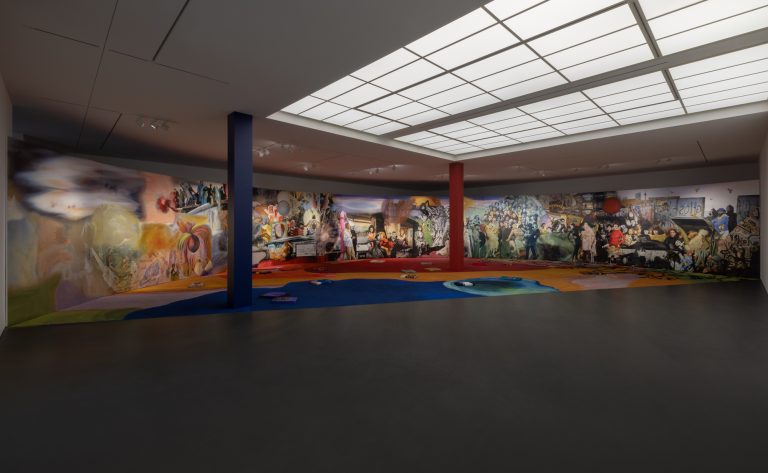 The artist described her first panorama, conceived for her solo exhibition at the Secession, as a vision. Taking Diego Rivera’s giant 1947 mural Dream of a Sunday afternoon in the Alameda Central as point of departure, DGF produced her own equivalent:

“a huge transfeminist and antiracist excursion… an eruption of life, protest, activism, desire, in a period of control, fear, isolation and screen time….”

In this “Volcanic Excursion”, as the work was called, more than 230 characters inhabited a fantastic landscape, alongside representations of alien life. The second panorama at the Serpentine Galleries, “Alienarium 5”, focused more specifically on this notion of the extraterrestrial. Posing the question “What if aliens were in love with us?,” the artist created a speculative environment that condensed her decades-long interest in science fiction and imagined an otherwordly site of human, nonhuman and extraterrestrial connection.

The new 180°-degree panorama draws on the history of Berlin in the 20th century. A central motif of Panoramism and the Abstract Sector is the Berlin Wall. Covered in lyrical abstractions in one section, abstract expressionist in others, the wall forms the backdrop for a myriad of figures—artists mingling with actors (in character and as themselves), dancers, fashion designers, musicians, philosophers, theorists, and writers—quoting from photographs, paintings and drawings. Along a temporal arc—from scenes of crowds atop the wall in November 1989 to later images of toppled sections of graffitied concrete—other locations in Berlin and protagonists from earlier moments, especially the Weimar years with its lively, transgressive, and genderbending art and theatre scenes, are interlaced. Another emphasis, signaled in the title, is abstraction, in particular abstract painting. Thus, Panoramism and the Abstract Sector includes a wide range of reference to 20th century abstraction, especially Color Field Painting and Abstract Expressionism, paying tribute to artists such as Helen Frankenthaler and Lee Krasner but also actress and film maker Musidora (from Irma Vep) and transformative art world protagonists Bonaventure Soh Bejeng Ndikung and Okwui Enwezor. 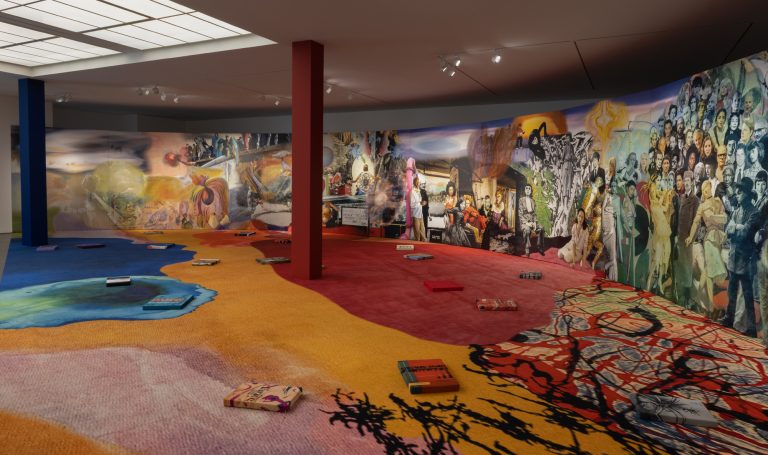 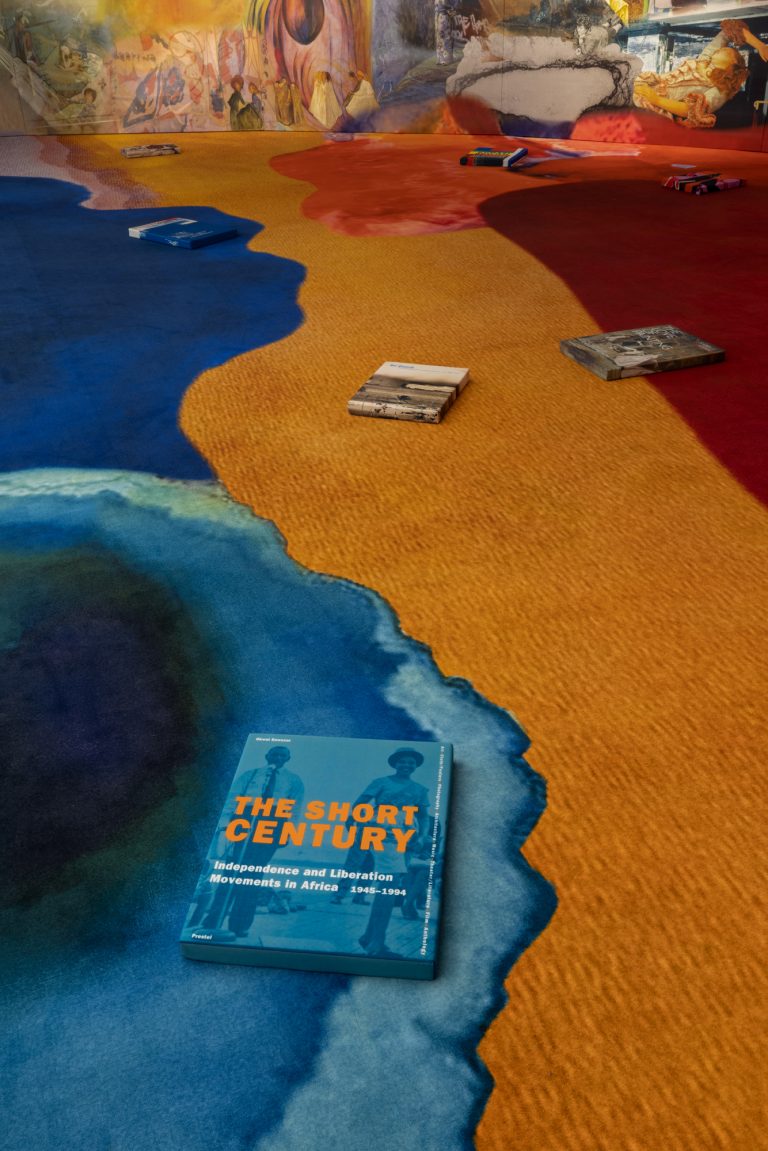 Altered realities and quotations from art, image and film history have been a major theme in DGF’s practice. Thus, “Roman de Münster”, her 2007 contribution to Skulptur Projekte Münster, and “TH.2058”, her 2008 solo presentation at the Tate Modern, modified existing works by other artists. The former included thirty-eight miniatures of art works from different iterations of the decennial in Münster, assembled in a theme-park-like parcour, while at the Tate, works were enlarged and their transformation integrated into a dystopian narrative. Historical figures and their representation are central to DGF’s series of apparitions, part of her larger ongoing project “TH.2062” (a fragmentary opera), begun in 2012. Likened by the artist to inhabiting a character “séance-like,” DGF’s apparitions have included among others Maria Callas, Bob Dylan, Emily Brontë, Véra Nabokov, Lola Montez, Marilyn Monroe, Fitzcarraldo, and, most recently, Foxyne, based on a character from the 1922 novel “Lady into Fox”. And since 2017, through “Exotourisme”, her collaboration with Julien Perez, the artist has made manifest her interest in music, combining staged concerts with appearances as “replicant” characters from Blade Runner. The first album is coming out on October 21 and on the occasion of a “replicants tour.”

Visitors can explore the dense web of associations while seated on pillows printed with the covers of books, adding another layer of intellectual context, and continuing DGF’s longstanding inclusion of books into her environments, often creating veritable bibliographies alongside her works.

Concurrent with the exhibition, Paul B. Preciado and Gonzalez-Foerster’s Une Valise Transféministe will be on view in the bookstore. 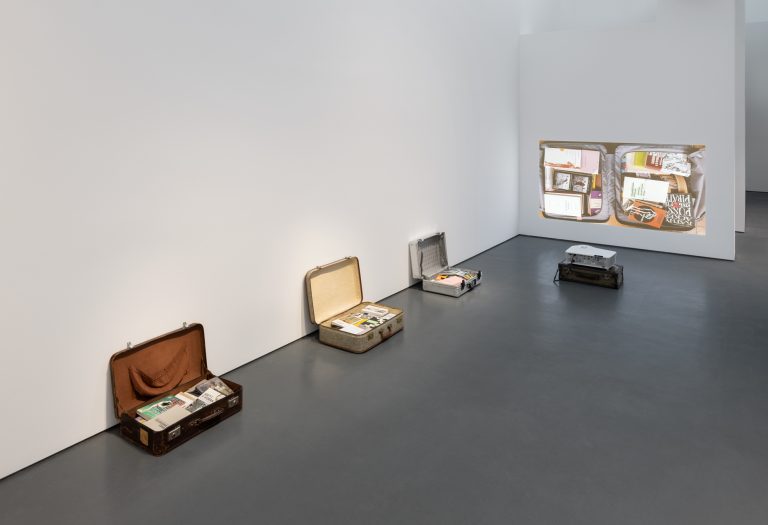 Une Valise Transféministe is an ensemble composed of different suitcases, books and a film.

The film brings the books to the screen. Between a portable library and transition kit, Une Valise Transféministe gathers photographic excerpts of feminist, lesbian, queer, anarcho-libertarian, and trans texts. A visual representation of shared reading, the film poses (and seeks to give one possible answer to) the question of how text and books can be exhibited. From the underlined sentences, highlighted passages and footnotes of references marked for further study, a portrait of a reader—or several readers—emerges, as well as a powerful legacy of feminist and transfeminist thought.

All the texts depicted in the film recur as physical books in the three suitcases summarily entitled Une Valise Transféministe. The three used suitcases are filled with sets of books from different eras—one with books published before 1900, another with works dating to 1900-2000, and a third with publications since 2000—and come to represent epochs of feminist and transfeminist thought. Among the books are novels, memoirs, historical and political treatises, philosophical tracts, manifestos and theoretical essay, classic and foundational feminist and transfeminist texts, on topics that include, among others, class and race relations, colonialism, suffrage, the rights of women, human and nonhuman animals, gender and sexuality, and love. 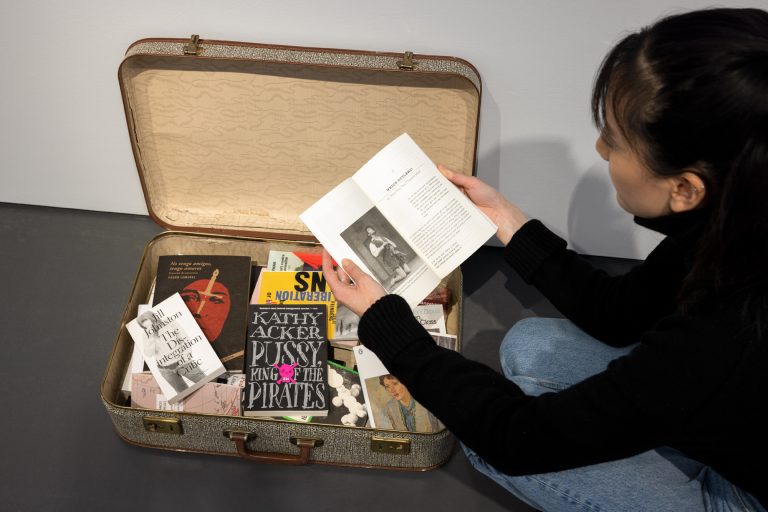 Feminism, it has been claimed, begins again every generation: a fragmentation that can undermine the achievements of previous generations.

Une Valise Transféministe, then, is also a gesture of recuperation, against this forgetting, stipulating a long trajectory of feminist and transfeminist thought and activism.

In addition to histories of thought and activism, the book-filled suitcases also evoke transitional spaces, both literally—travel—and metaphorically—the state of becoming. It also recalls DGF’s series of works entitled “tapis de lecture”, composed of carpets and piles of books forming the bibliographies of the work itself.

Among previous collaboration between Paul B. Preciado and DGF are, for example, songs written by Preciado for “Exotourisme”—DGF’s musical collaboration with Julien Perez—and the development of the sculptural work, “In remembrance of the coming alien (Alienor)”, presented in the park outside the Serpentine Galleries on occasion of DGF’s 2022 solo exhibition at the institution.

Concurrent to the presentation, Dominique Gonzalez-Foerster’s exhibition Panoramism and the Abstract Sector features a new panorama, especially conceived for the exhibition, which draws on the history of Berlin in the 20th century. Continuing her creation of an artistic, emotional and intellectual genealogy, begun at the Vienna Secession in 2021 and at the Serpentine Galleries this past Summer, the new panorama also includes a special focus on abstract painting, paying tribute to artists such as Helen Frankenthaler and Lee Krasner but also actress and film maker Musidora (from Irma Vep) and transformative art world protagonists Bonaventure Soh Bejeng Ndikung and Okwui Enwezor. 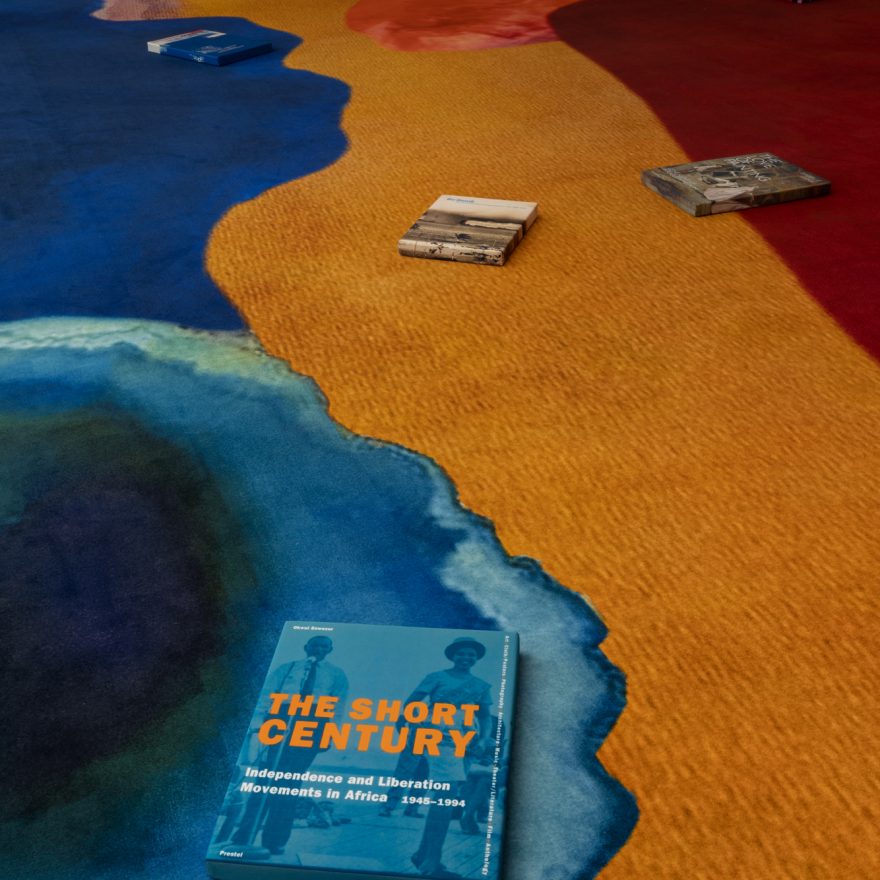 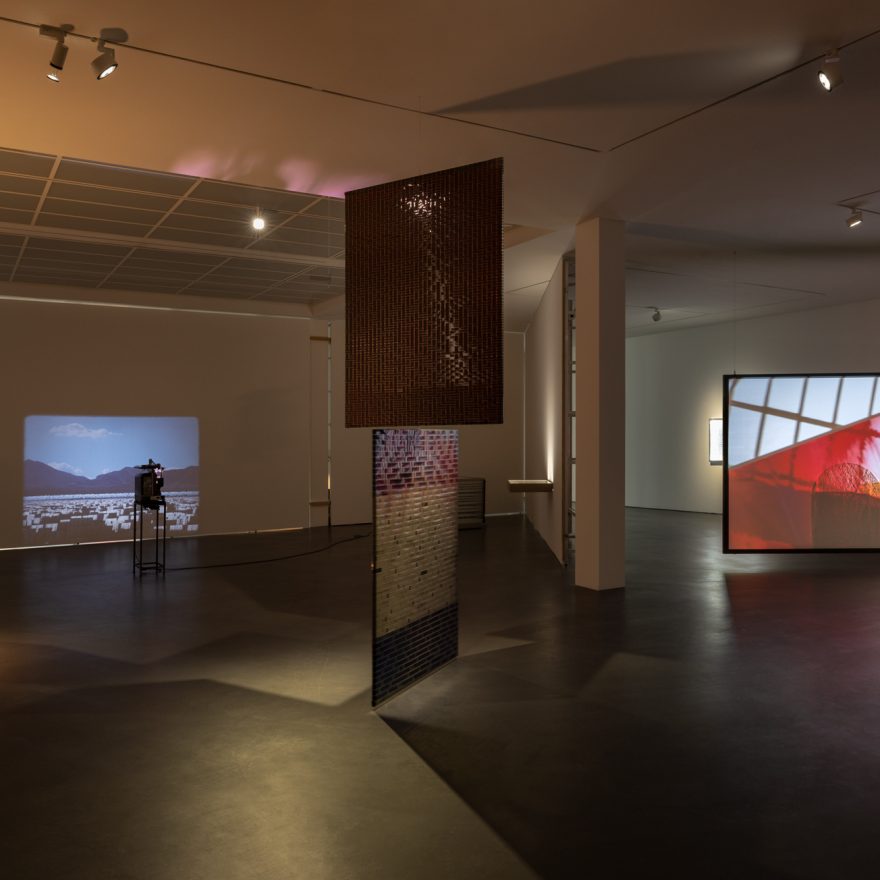 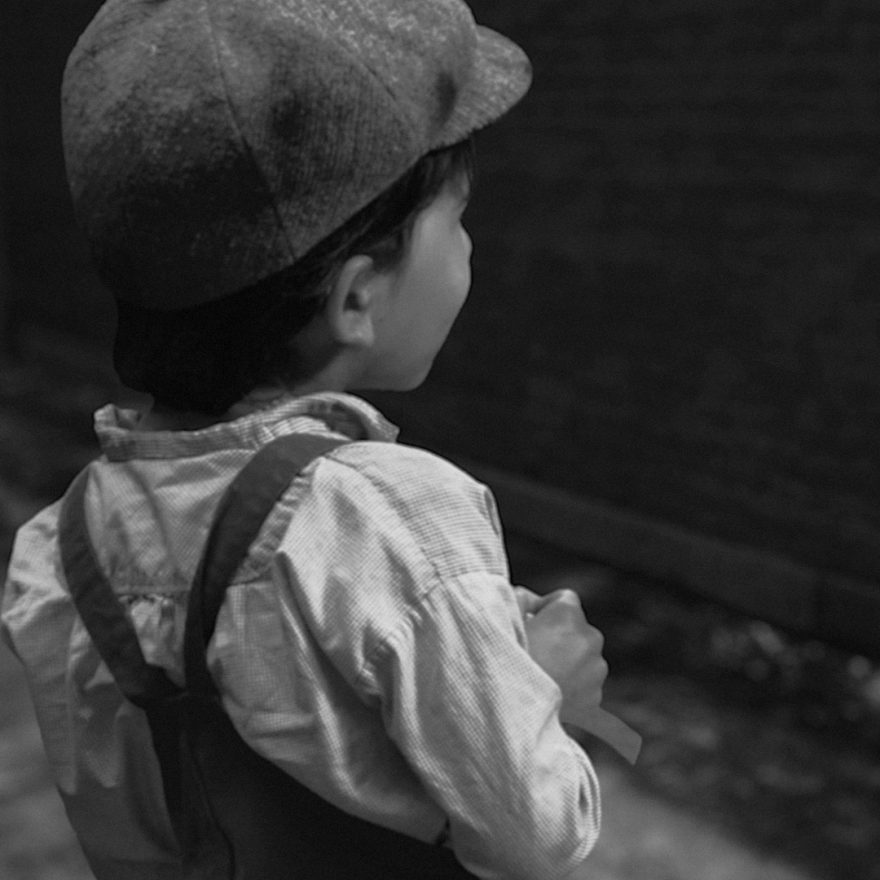 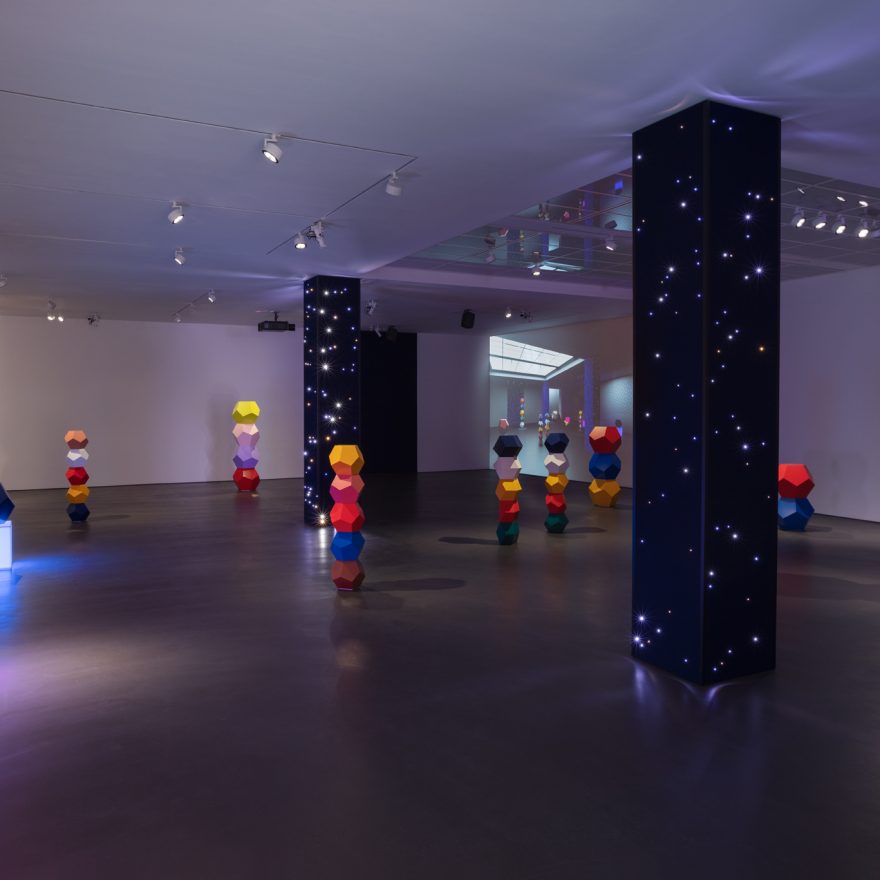 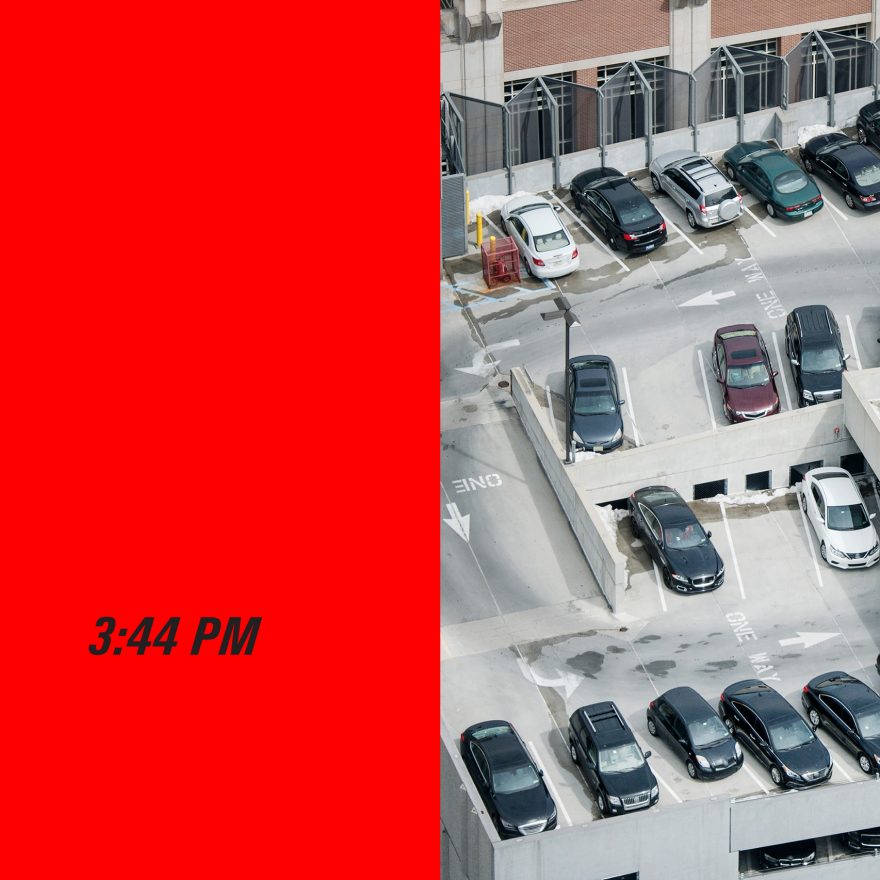 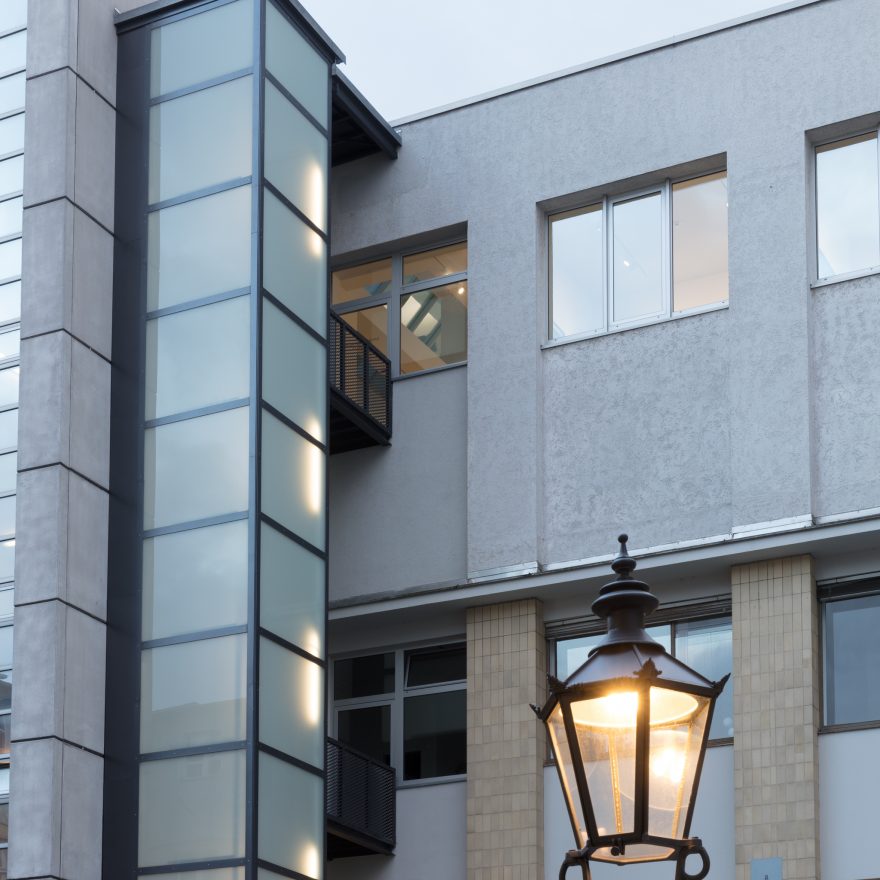 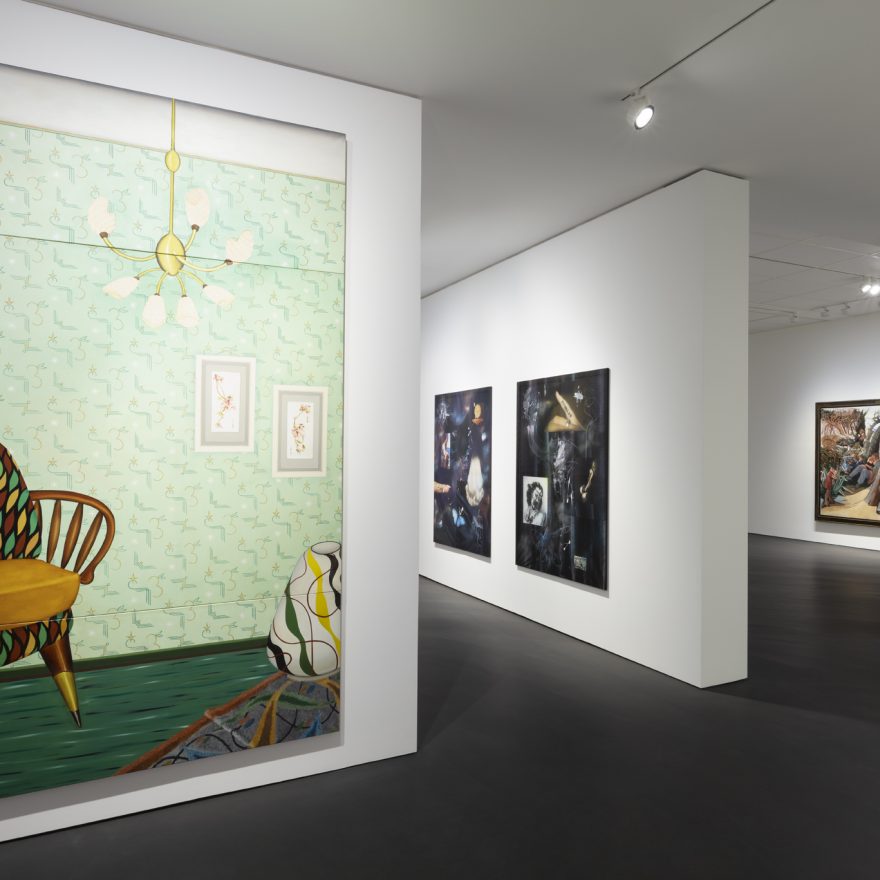 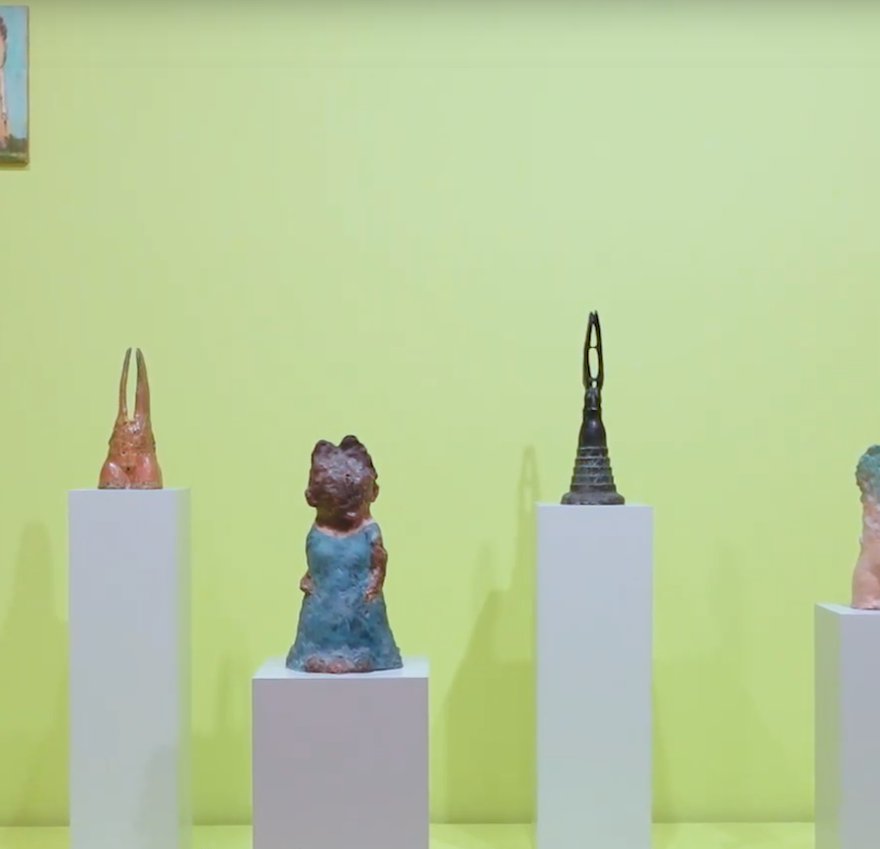 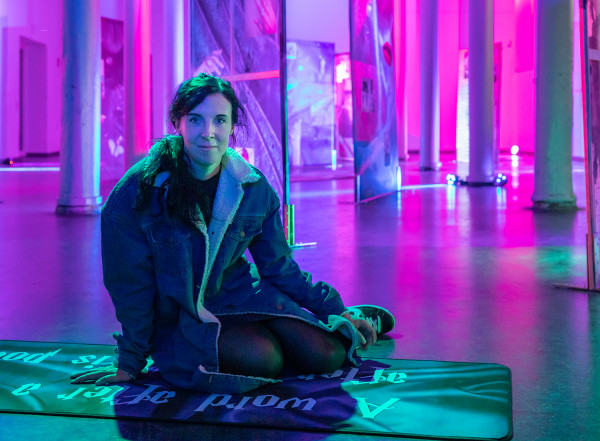 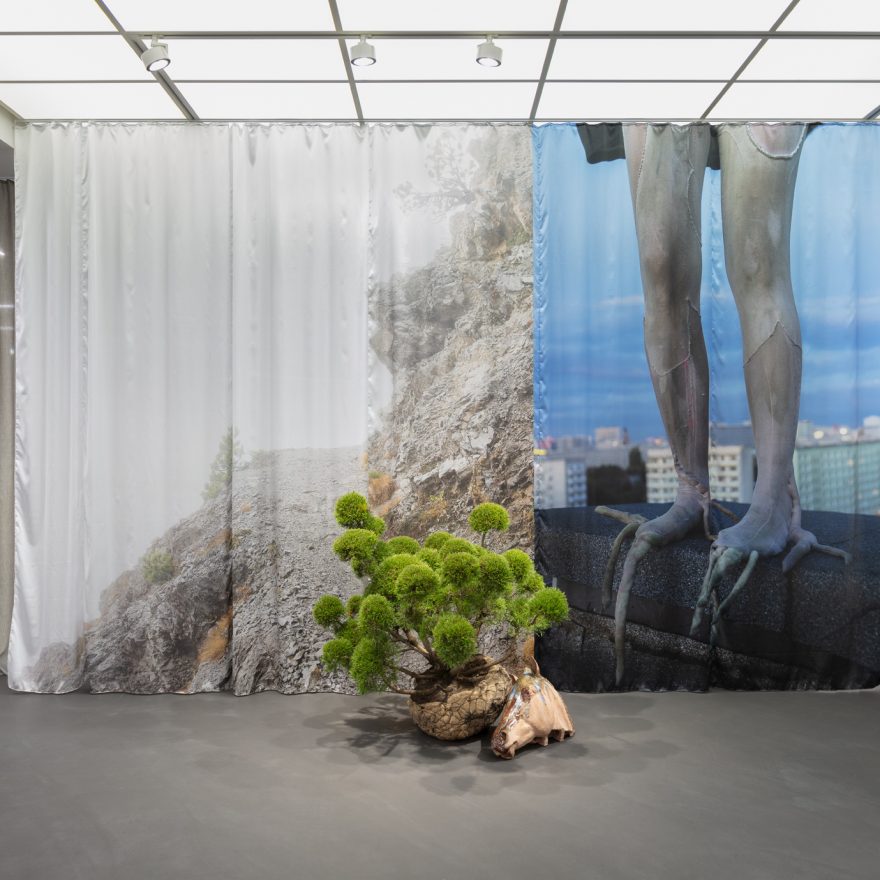 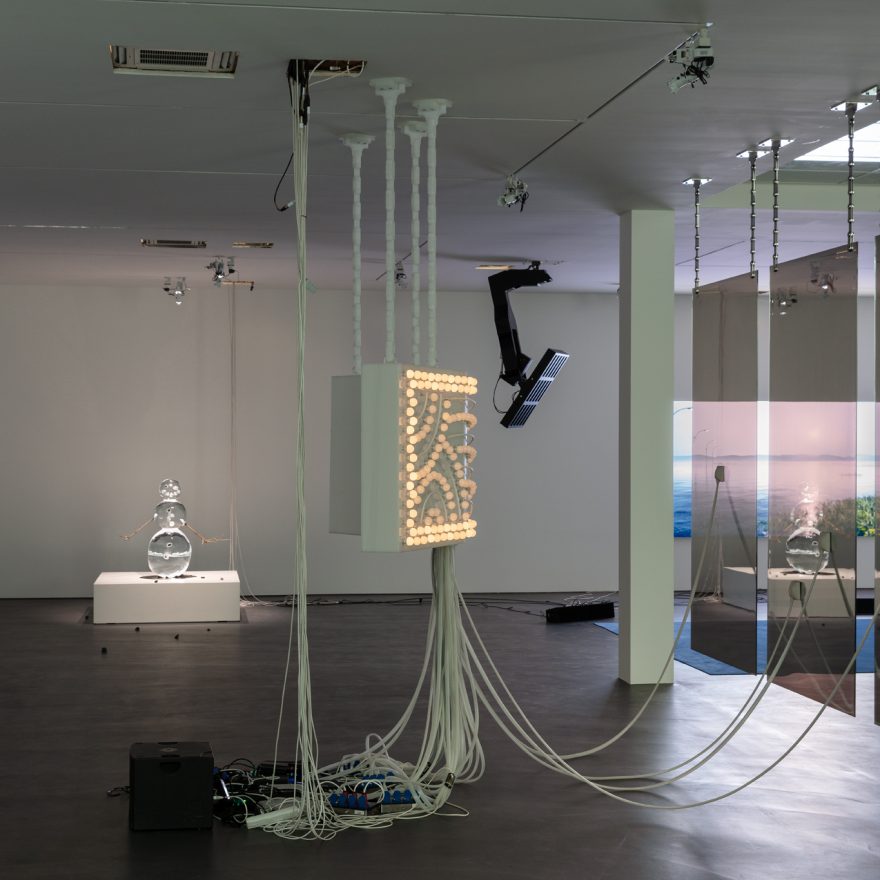