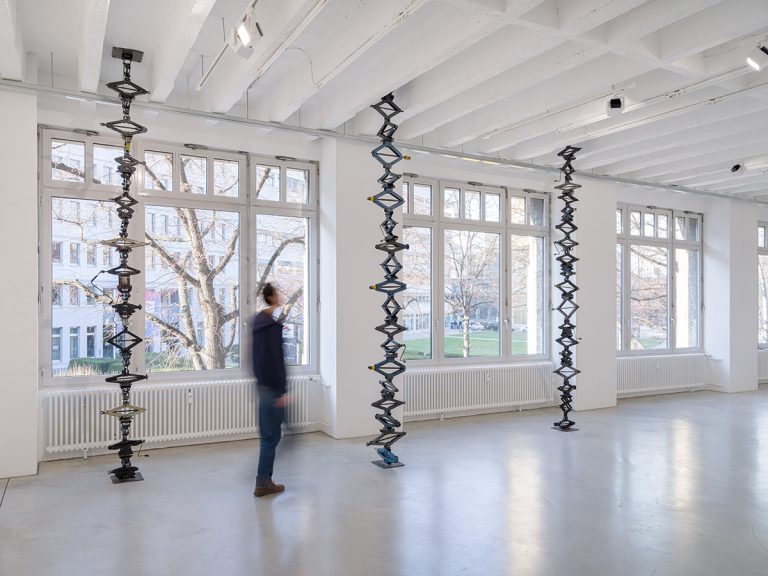 In her work, Sofia Hultén uses the remains and rubbish of everyday life, transforming it into challenging and often humorous material thought games in order to explore ideas and scientific suppositions. Almost surreptitiously, she thus engages with politically and culturally charged issues of our period, obsessed with progress and growth. Her fourth solo show at Galerie Nordenhake and her first at the Berlin gallery, this exhibition with the playfully ambiguous title Hat Trick Cyclist brings two series of sculptures and wall works into a dialogue with sculpture from the past ten years. 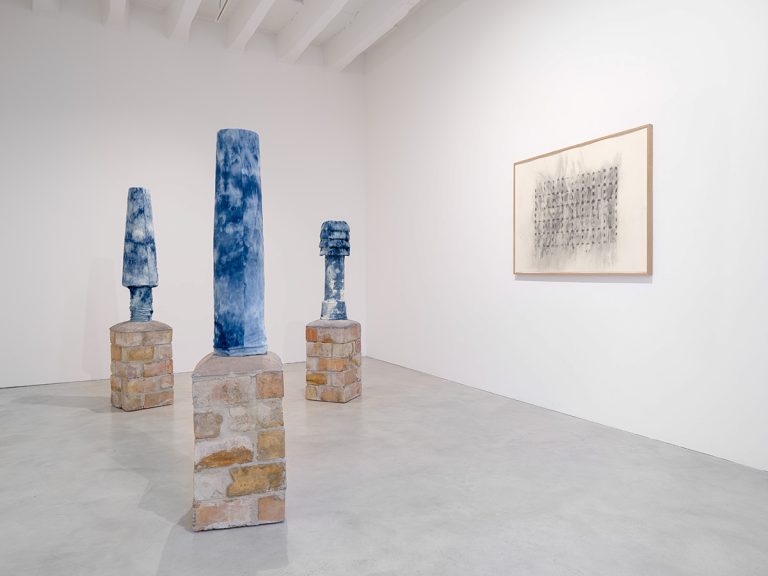 The wall sculptures Undead, Undead are typical for Hultén’s way of working and her precise observation of the potentials of relics from the work world, revealing their unsuspected nature through minimal gestures. Four individual teeth of an industrial excavator hang next to one another and recallwith their brightly polished upper sides the uncanny teeth of a gigantic vampire. The jewel-like, perfectly shining surfaces allow two larger, highly contoured fork screw teeth to become futuristic masks à la Darth Vader. One imagines a world in the future in which the remains of our industrial culture, subjectto the laws of gravity, have become totems. 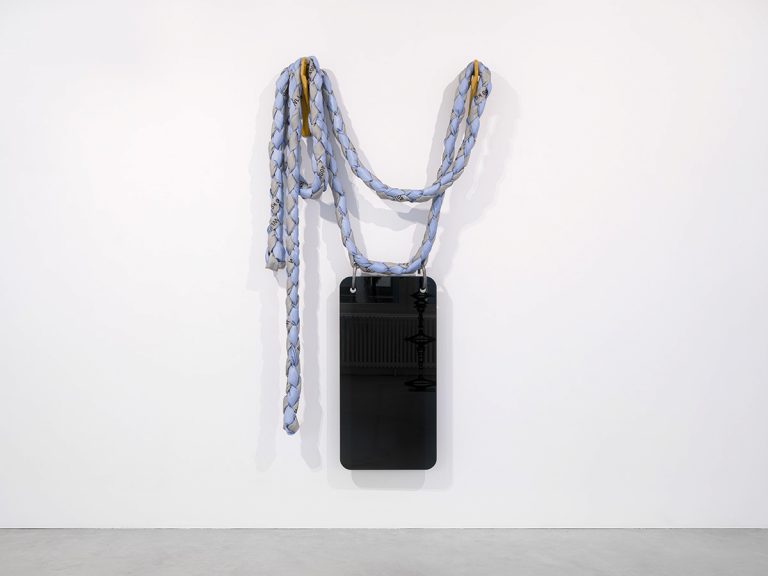 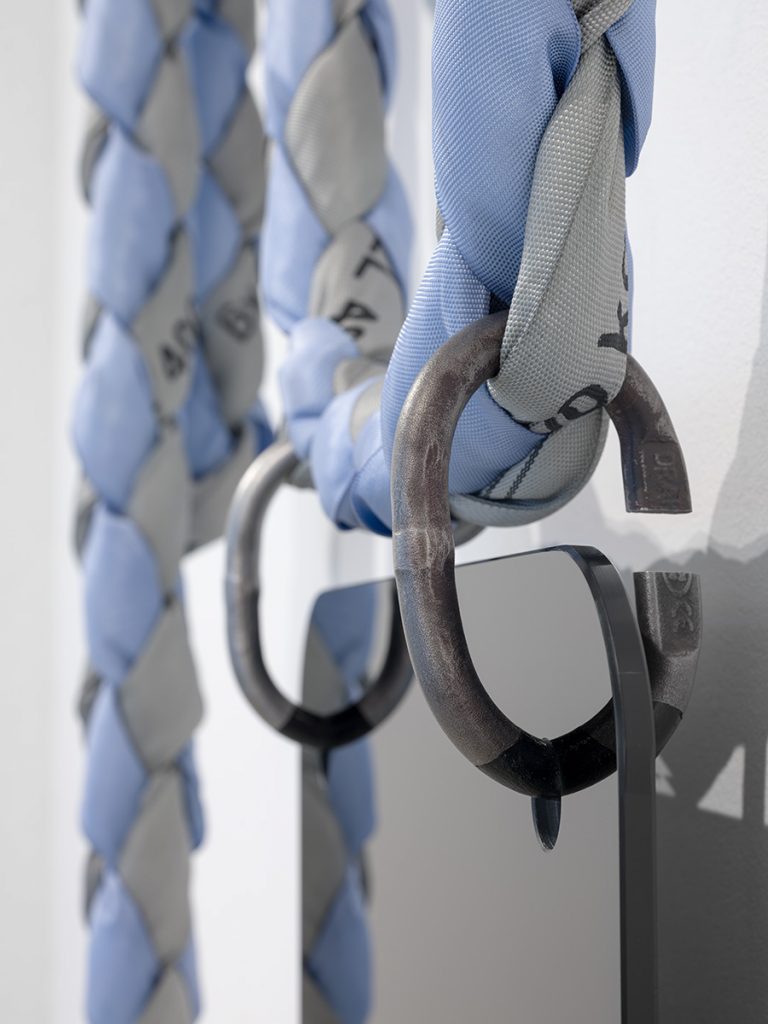 In the most recent group of wall sculptures, she takes her laconic strategy still further, exploring complex issues with simple equipment from construction sites and precisely selected industrial material. Hultén has woven round slings, utilized at construction sites to pick up weights of over 400 metric tons, into ornamental ribbons, and used them to hang three massive panes of glass. The dark, reflecting panes shaped like an oversized smartphone sway, are held before the wall by two massive excavator teeth, and recall black mirrors. Black mirrors, also known as Claude mirrors, were popular as aids among landscape painters and travelers in the eighteenth and nineteenth century to abstract from the immediate natural impression when regarding the outer world. John Ruskin called it, “one of the most pernicious tools of falsifying reality.” 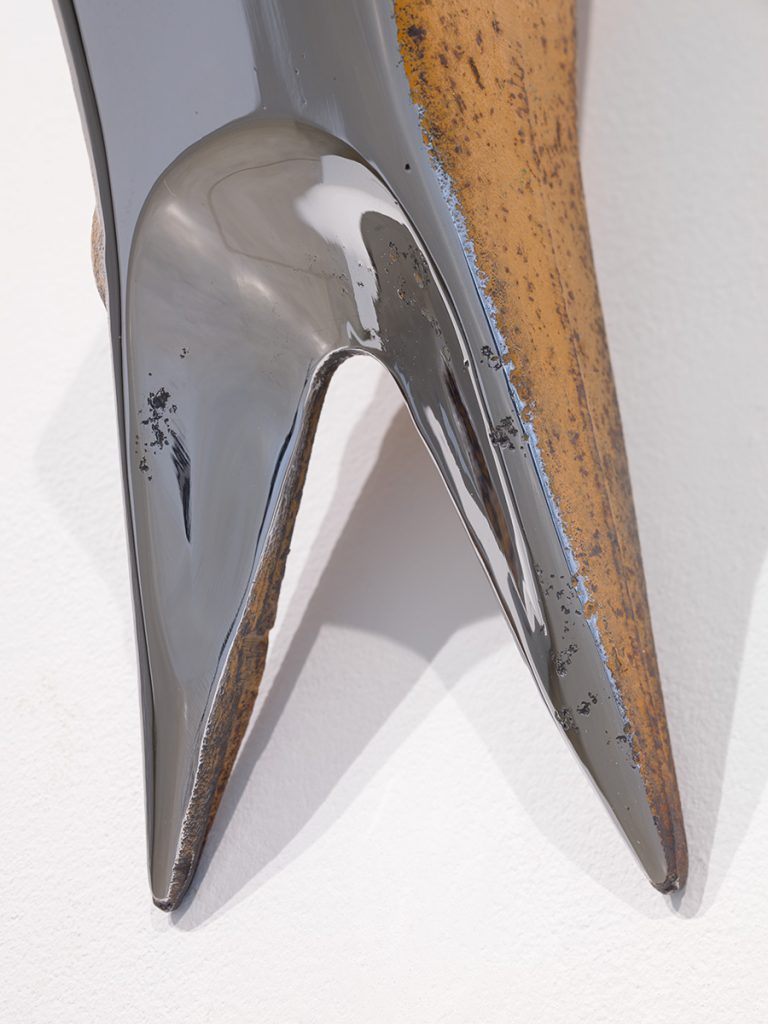 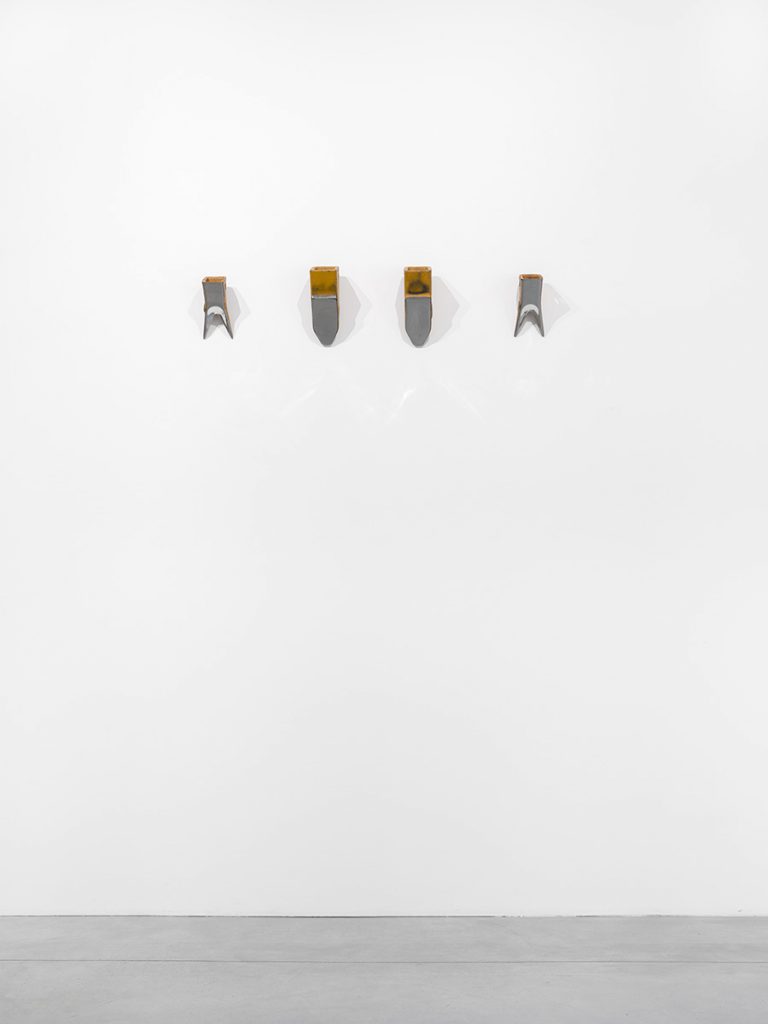 Questions about our conception of reality, the relationship between the past and the future, the cyclical nature of things and the interaction of time and material run throughout the exhibition. In her second new series of works, materials from two different cultural and historical contexts collide. A pair of jeans sticks out of a brick chimney, the legs stretched upward. The bricks marked by traces of use and aging can be located in the past industrial age and in contact with manual labor, while the striking pair of bleached jeans became a trend during the 1980s and are now being rediscovered by a generation that grew up in the digital-age as “acid-washed jeans.” Hultén suggests a link to the film “Mary Poppins” and the chimneys on London’s roofs that are prominent therein. If you squint, the jeans become dancing clouds of smoke. The work lets Hultén’s anarchic imagination shine in that the notion of reality is not reduced to the supposedly irrefutable space and time dimensions of our everyday experience. As soon as our naïve belief in the learned relationship between cause and effect is suspended, everything could be different and a parallel reality opens. With “Statik-Elastik” (2012), a group of thin metal stelae that span the gallery space from the floor to ceiling, Hultén activates the potential movement and transgressive power that we normally do not assign to static objects. The filigreed supports areassembled of car jacks piled up on one another and fixed in such a way that they seem to support the ceiling. However, in our imagination turning the cranks would trigger a movement that bursts the ceiling. Hultén notes, “Each particle contains the potential of an unbelievable amount of energy.” 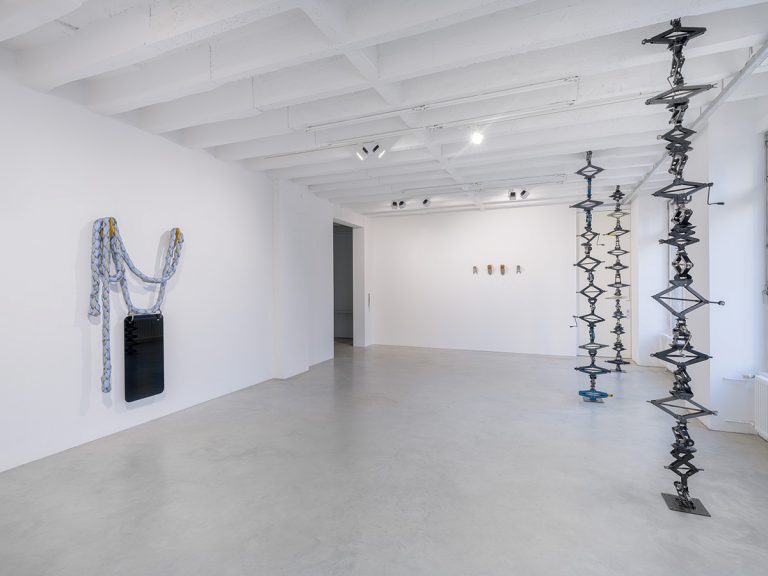 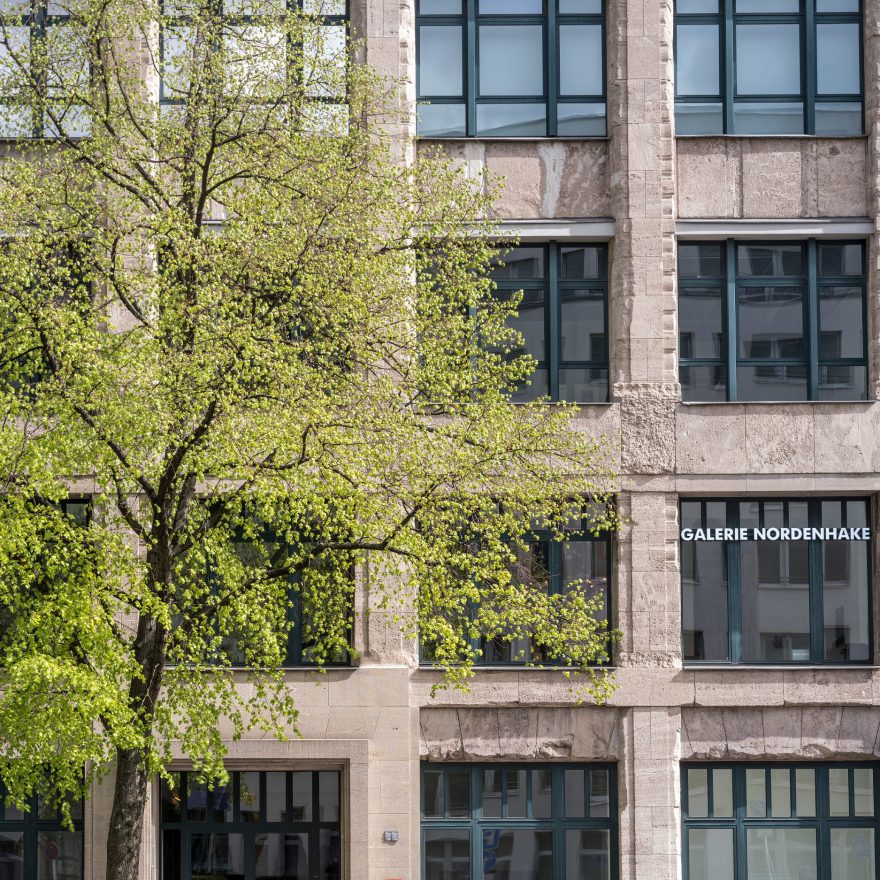