In his new exhibition Butcher Block at Efremidis, Mathis Altmann (*1987, Munich) witnesses the millennial moment and its ongoing collapse between work and leisure. In the grip of a burgeoning meritocracy, his generation’s drive to improve peaks in a perpetual need for self-glorification. The British artist, musician and writer Steven Warwick elaborates in this text, how Altmann’s signs are fed from a “millennial resignation to corporate self-optimization and alignment through affirmative corporate slogans” and establishes a connection to art historical antecedents. 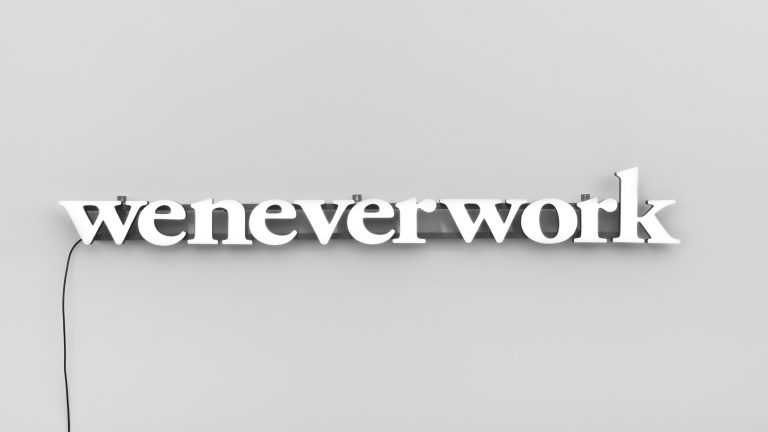 The bright and shiny “We” was a populist buzzword (Wir sind das Volk!) in the protests against the East German government to denote collectivity. In our current moment, it’s more like a “community” of individuals, who all check their email in the same room, together. “Curated” playlists on platforms such as Spotify, which soundtrack the WeWork franchise, taxonomize neologistic categories of genre and context for listening. We live, laugh and love in environments of total design. Similarly one’s “truth” can be remixed accordingly, endlessly reshaped and, most importantly, “lived.” In a recent article exposing ideological malfeasance between two influencers on a social media platform, Ash Sarkar posited that “the personal makes up the sum total of the political: there’s no such thing as social struggle. The influencers have invented intersectional Thatcherism.”[1] “Holistic” desires to be at one with the body, to feel whole or cohesive, seek to be merely a lifestyle; they supposedly liberate us from the status quo but are in danger of reinforcing rigid taxonomies. Fluidity is a paradoxical reified icy lake to skate over. The 1990s beloved “relational” has been updated to “adjacent.” Nothing is real, everything is permitted. Until you say the wrong word and you are fired. Youdontwork. Bye!

Perhaps this incessant interchangeability of subjectivity and constant availability could explain the current iteration of “the personal is political.” Having been emptied of the feminist critique that all spaces have been infiltrated with work and capital and that no private space remains, the phrase has come to mean the choice to economically boycott an undesired brand. However, if one can imagine the halcyon days of one’s iTunes being invaded by an undesired U2 album or recall fantasizing about just who the silhouetted people dancing with their iPods in the Apple ads of the 2000s were—are things so different? Mark Fisher would address the generational shift of attitudes between the marketed demographics of Generation X and Millennials by use of cinematic analogy. Where the violence and transgression of yore was proudly displayed on its sleeve via tribalistic displays of nihilism to drop out from “the crowd” (Terminator), today’s violence exists as deliberately bland or “neutral” twee artisanal labor (Avatar) where one can feel rustically echt while living in the most advanced technological bubble. Fisher posits the twee violence of chalkboards and aeropresses, enacted according to social script and then reproduced for an online audience. The violence is still there, it just now has a cutesy smile masking it :) Under the pandemic, at a loss to boast about one’s latest aspirational staycation, a certain crowd took to filming themselves baking sourdough bread, fulfilling the latest iteration of the cinematized, mimetic domestic zones. Altmann’s exhibition title mocks one such trend: the Butcher Block, used as domestic decor in which nostalgia is an unlived fantasy for industrial labor.[2] 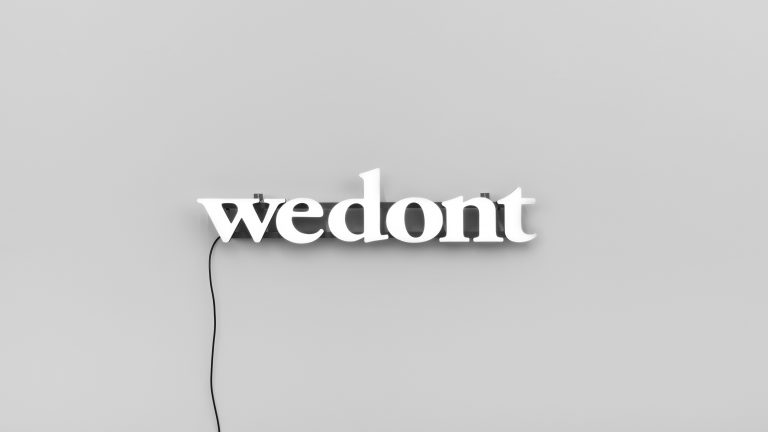 Resisting a popularized desire to not work, Altmann makes a protest sign, WeWon’tWork!, nullified by the fact that currently many workers cannot work as their economies have collapsed or are on freeze during an unprecedented pandemic moment. The transgressive resistance has been absorbed by a non-functioning state of being. There is no option to request “Ne travaillez jamais”; “I would prefer not to”—Debord and Bartleby would be reeling in this current moment. This catastrophe has historical parallels to other acts of ecologically-induced market blockading, like the container ship in the Suez Canal breaking loose while docking; the 2011 eruption of the Icelandic volcano, Grímsvötn, which caused mass groundings of flights and delays to trade; or even the Year Without A Summer in 1816, where an Indonesian volcano eruption, impacted on global weather cycles, resulting in severe climate abnormalities and as a result, mass famines. Under the current rendition of the global catastrophe—the pandemic—co-working spaces such as the WeWork franchise have been rendered obsolete. 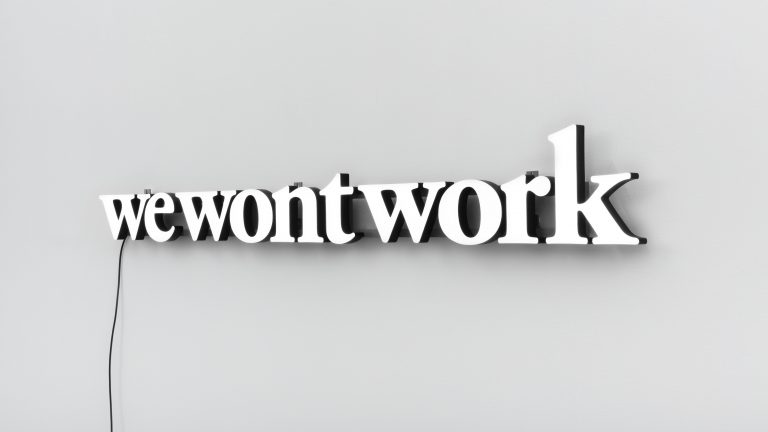 Sculpturally, they also share concerns with John Knight’s ongoing JK series from “Danemark (Project for Documenta 7)” (1982), which features the artist’s initials as a sculpture, and offered institutional critique of the artist as brand, or the post-relational prank of the JK cap (“JK, a work in situ, Art Basel,” 1992) that Knight’s gallerist Colin de Land had to wear for the entire duration of the art fair. Well-intentioned dematerialization bore eerily similar practices to the creative strategies of a brand manager. Knight’s other unrealized proposal for Skulptur Projekte Münster was a bicycle service to transport the visitors around the site and anticipated the rise of the bike sharing economy. In Die Umschulung (1994) by Harun Farocki, East German workers are retaught business skills, communication and affective labor practices. Farocki explored the operational details of introducing the logic of the free market in a country formerly trained in planned economy. In Altmann’s work, he flips this commercial savvy to hollow out such corporate rhetoric, just as the franchises themselves are currently hollowed out by an absence of work and workers. 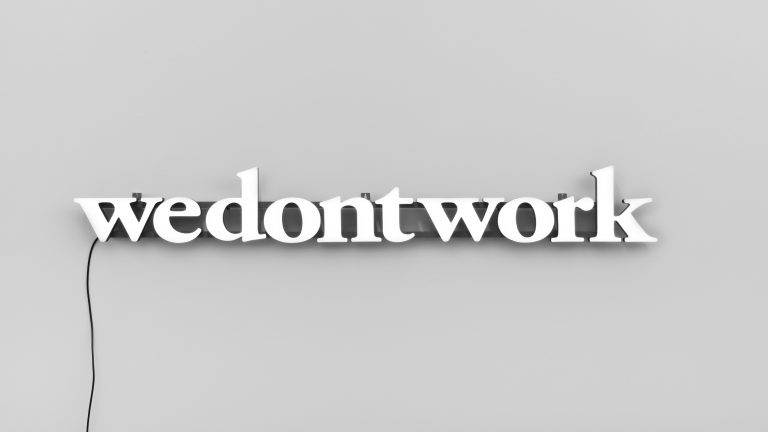 Generational attitudes have shifted from belly button piercings to cringe emojis. Twenty-year-olds quote Nietzsche’s Übermensch with unclear use of irony, perhaps in a search for paternalism? Is a lack of ideology the last taboo? A (Wo)Man without Qualities? Has the market won? Or can it even win? Are we merely anthropomorphizing it, as per the now gender-neutral, formerly known as Mr. Potato Head? Taxonomic categories or “demographics” reinforce that representation is often mere marketing under the auspices of the ideological ground of “visibility,” a much-loved term like its 1990s counterpart “transparency,” which dictates that corruption is acceptable, as long as it’s in plain sight.

Today, in a sea of interchanging mood boards and amid the collapse of exclusivity, one such tactic to resist the work of the status quo was to have a blue check against one’s name, to be “verified,” as if it were an authentic champagne. With current metrics optimizing follower counts, the current generation revolts: too many followers signaling passé, deleting their social media accounts for real-world social capital. With endless on-the-spot performances, everyone is a caretaker in public as well as a brand manager, creative director, DJ, conflict resolutionist, and poet, all in a Faustian pact.

However, that isn’t to say this obsession with self-realization is in any way solely the fault of the ever-expanding Millennials. At the onset of the globalized world of the 1990s, relational aesthetics was en vogue, an update to denote the 1960s and -70s dematerialized art object as practice. The self-realized cybernetic individual was an ideological focus in proponents of Stewart Brand’s Whole Earth Catalogue, a group of Californian hippies who sought to reboot the human body as would consequently be done—ad infinitum—with an OS system, the so-called Californian Ideology of Silicon Valley as a direct legacy of this venture. The Whole Earth Catalogue never wanted to critique capitalism, merely to optimize it. After its effects, play was incorporated into the Google office space with adult playgrounds and chill-out rooms; psychedelic drugs sought to increase labor productivity instead of “dropping out” of society. 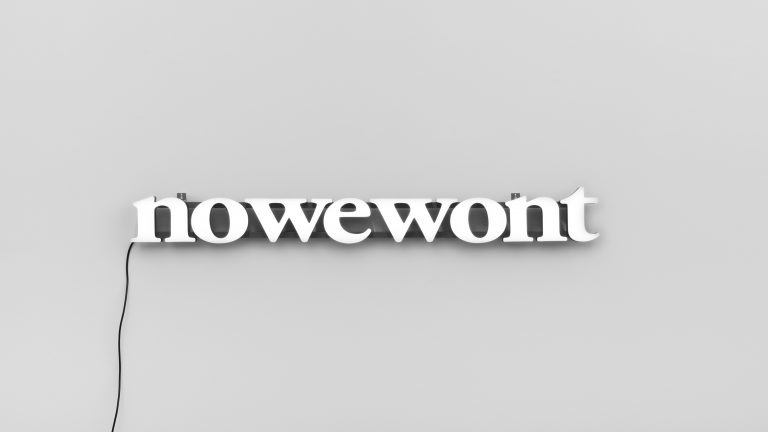 If the Millennial resignation to corporate self-optimization and alignment through affirmative corporate slogans is experiencing an impasse, the Gen Z logic will be to openly quote Jordan Peterson or Wagner unironically. The politics of action has found its conclusion in the politics of image, a Gesamtkunstwerk on TikTok. If we are to rely on individualistic rhetoric arguing for “freedom,” by default its lack of political definition invites opposing ideologies which could ironically further restrict those very same freedoms. Altmann is making a joke, self-aware enough to realize the shortcomings of wantonly embracing the rhetoric of corporatism while mocking the obsession with endless self-optimization and the upgrading of a fractured self. In an era of incessant hyper self-identification and taxonomizing, are we one society, or are we many societies of supposed former infatuation junkies?

[1] “The Slumflower Beef Has Exposed the Limits of Influencer Activism” by Ash Sarkar, published 20 January 2021 in Novara Media