A letter to Ella

I wanted to ask you something, following my last visit to your studio.

What if every bit of information we read in our worn-out history books, or in the news we watch, or Wikipedia, or whichever site that is algorithmically made available for us in order to screen the kind of reality we consider ours, what if every bit of it requires our own check, I mean, that we would physically go out there to inspect and approve it by our own senses? And if we do decide to go out there and empirically certify that this location, or that name, or this height, or that weight are undoubtedly true – given that we are lucky to obtain the conditions and qualities required for the task (freedom of movement and access, for instance) – what do we do with our findings? And what about the things that our constantly changing webs of information never mention, how do we know to look for them or inquire about them at all? 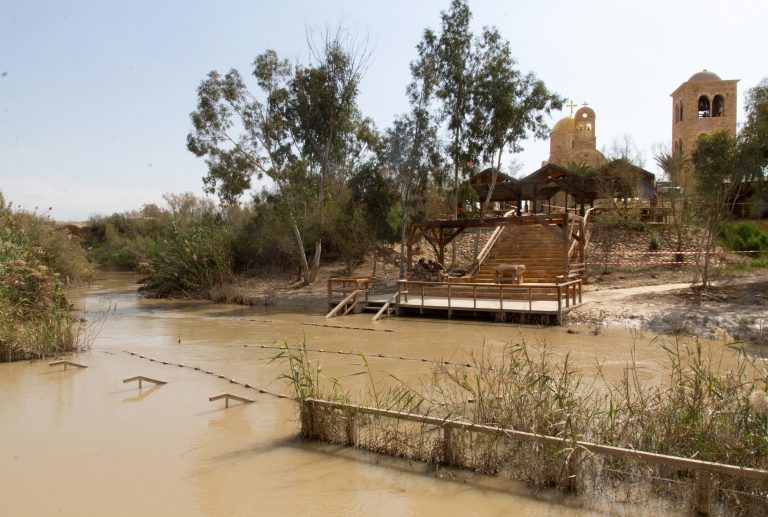 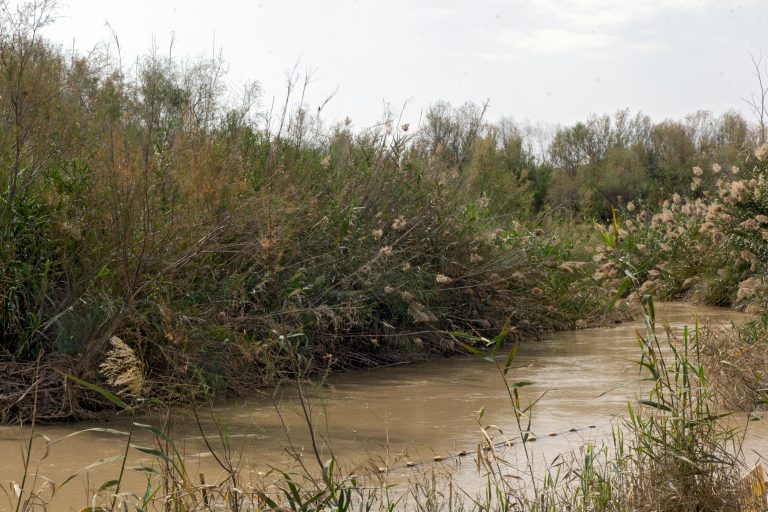 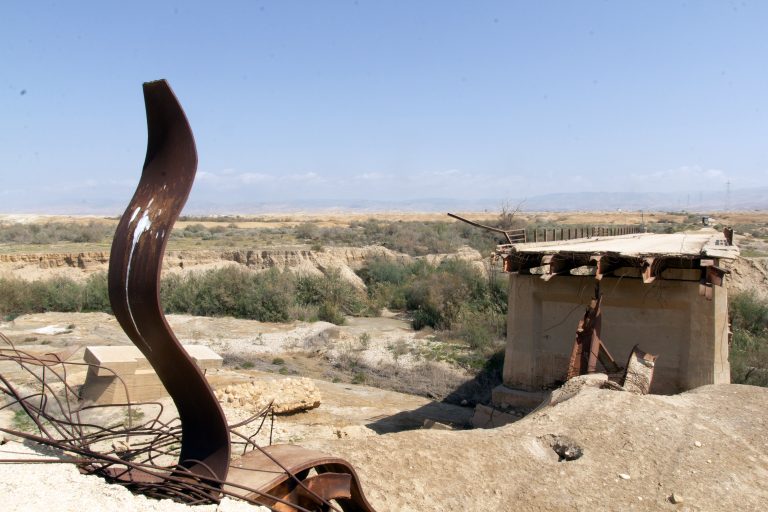 I understand that for you these are not just dizzyingly Borgesian literary games but actual calls for action, as you indeed go there to check the grounds for the most basic stories we tell ourselves about this place, I mean, Israel, Palestine, Canaan, Jordan River, Moab, The Dead Sea, Sodom, The Mediterranean, Thetis. Your extreme curiosity is your medium, isn’t it? You start with simply not believing a word of what we are told about the border between one country and another, or between land and sea, between a universal sign and a local threat, between stones and meanings. Then you must go there, for instance to Qasr al-Yahud, a point on the Jordan River where it is believed that the Israelites crossed back to Canaan and Jesus was baptized by St. John, and where today the border between Israel and Jordan is made of a flimsy rope held by pale floats over the shallow, muddy, holy waters. Then what you find clashes with other sources in your research, which a-priori contradicted one another, from the Old Testament to recent paleomagnetic archaeology and back to historical diplomatic agreements. So you interfere. You must interfere.

Like a pilgrim that makes a lifetime effort to reach the locum sacrum but, once there, must take something back home, a proof that restores truth and fixes faith for whoever accepts him when he’s back. But apart from what you take with you, which is never just objet trouvé, you realize that in your intervention at the border you touched only the top layer of something which has no stable identity, no matter how deep you go. Suspicious of the information that covers a place, curious to unravel the layers underneath, taking the risk that such action will take us much farther away from knowing something for sure. I think it is the opposite of archive-art, you know. 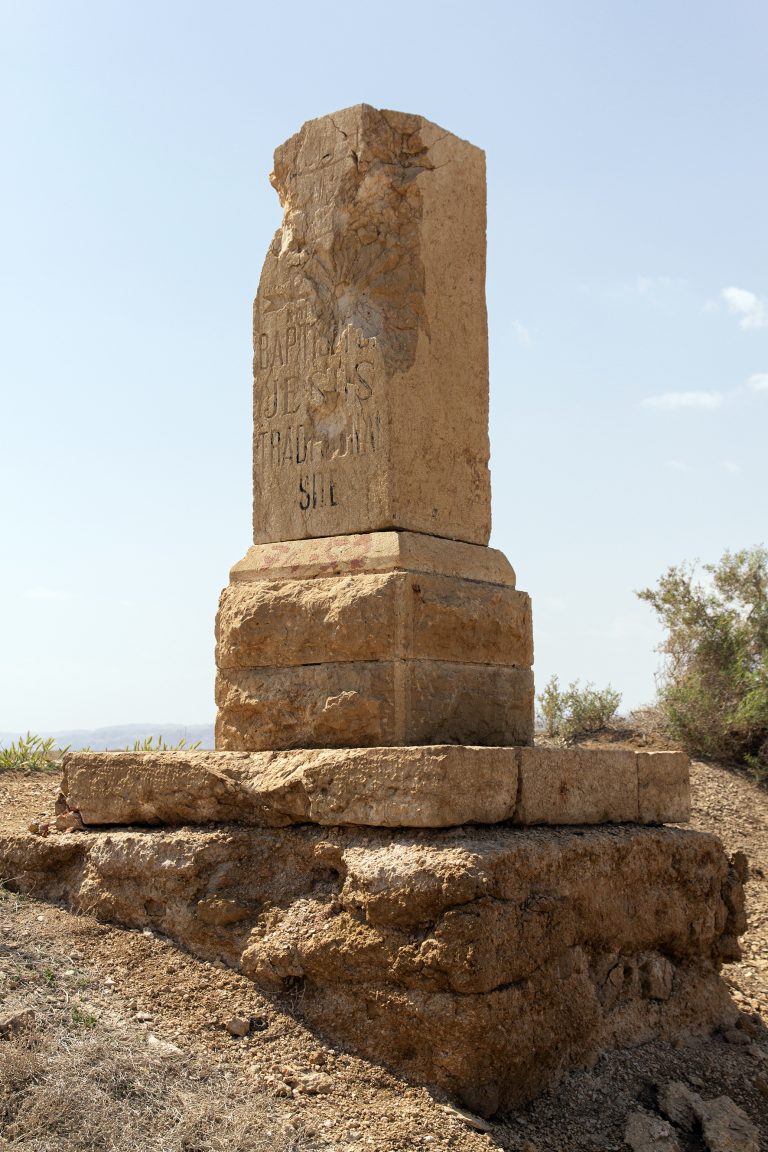 Curiosity and suspicion. Out afield and back home. With a proof. The proof is made art, now transformed. The place that you visited now misses a piece, it matches its agreed narrative no more. Here’s a trail, and one should follow the trail-markings in order not to be lost, in order to reach the supposedly single desired destination. Like most Israelis, I have known those colour-striped simple stones on the ground very well, in so many trips those surprisingly painted stones were the most thrilling find for the young-ones who ran ahead of the group, we wanted to be the first to know where to go, the first to know something is going to change. The colours of those stones match the colour of the trail drawn on the map, their angle matches the turn of the trail on the ground. You stole one trail-mark, it means we are lost. You have a whole pile of them, we are serially lost. Trails now have no destination or have endless possible ones. The stones are now assembled in your studio, precious stones, and the trail, I don’t know, it became a lost memory for me. 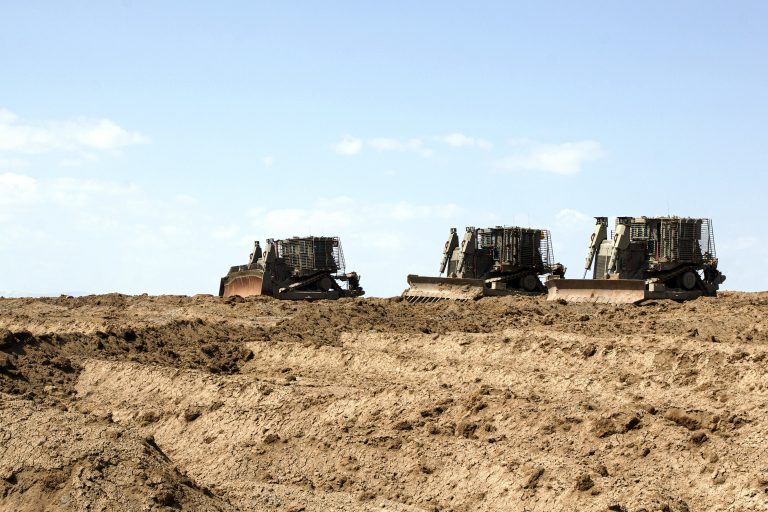 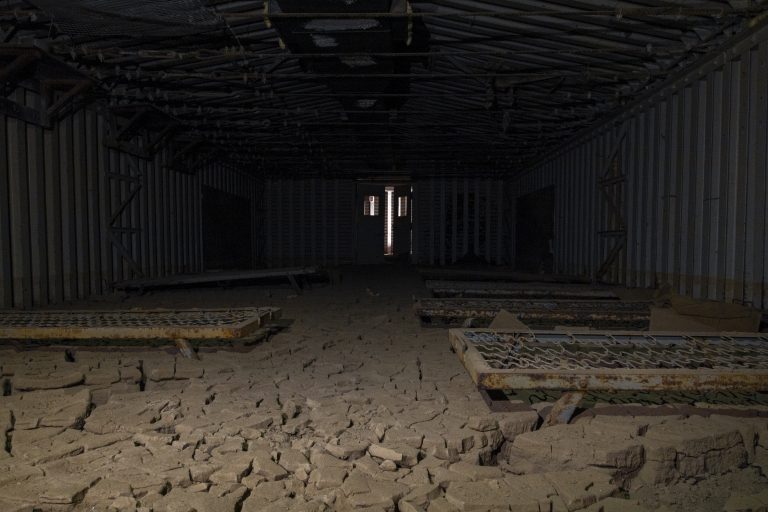 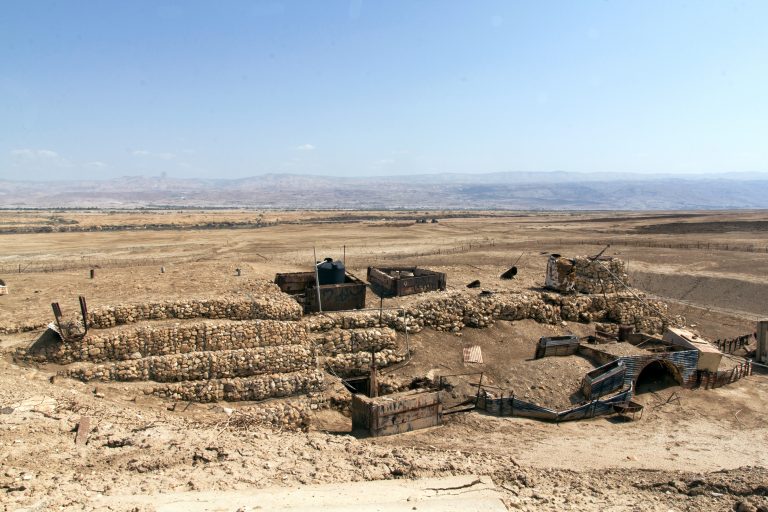 Then you told me there’s a borderline over the Jordan River waters. You took one float away, we mistakenly trespassed. I saw that you also casted some floats in bronze, like other pulled-out plants you turned to bronze, or a couple of iron barrels you stole from the ends of a military shooting range, porous from machine-gun bullets, spiky and corroded and cover over so much noise and pain. It’s all dead heavy, up for sinking, still accumulating on the studio floor. Your candid disbelief in the stories of this place, you turn them into burdensome evidence, I think. They are made of whatever you reclaimed from those liminal sites of identity-construction that never cease to attract our attention and preclude our presence. What I am trying to understand is how come those stolen objects, appropriated from such demonized spaces, are so damn beautiful, so swiftly they turned into something of your own making, they sort of carry your signature. Their unique beauty is so confusing until we come to know very little again. I wanted to ask you about this move.

But first, we agree that it is impossible to go out there and personally sense every piece of information about where we are and why, right? We must agree that some universal signs can still compensate for this helplessness, can’t they? Even if other artists like yourself, Ella (I don’t know, think of Gordon Matta-Clark, or Zhang Huan, or Francis Alӱs, of Pinchas Cohen-Gan) could bring us endless physical traces from their in-situ myth-deconstructing experimentations, it would never be enough for a society to replace its narratives and agree on new ones. We don’t have enough artists to do this, lest you guys are joined by others for whom no law or line is unquestionably given, masses of doubters are required, it’s called revolution, and it lurks behind most of the good art that is ethically challenging. Today, they say that in any case revolution is not art, I don’t care, we desperately need both now. 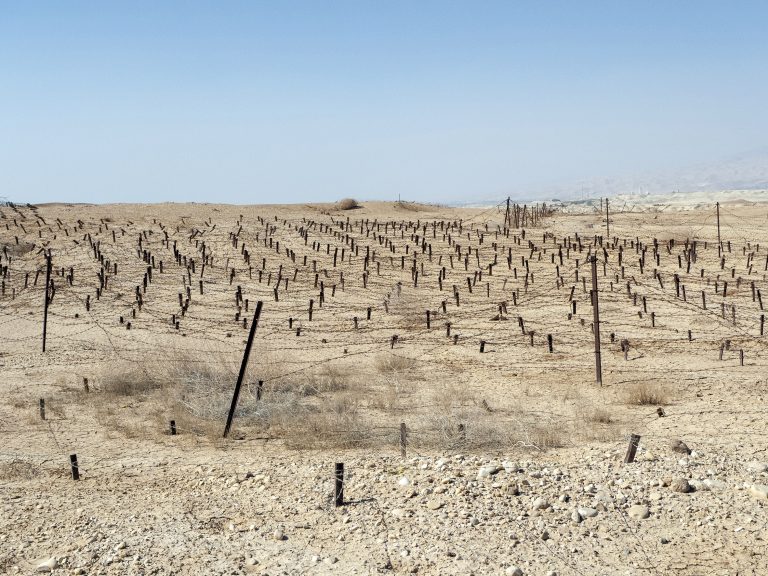 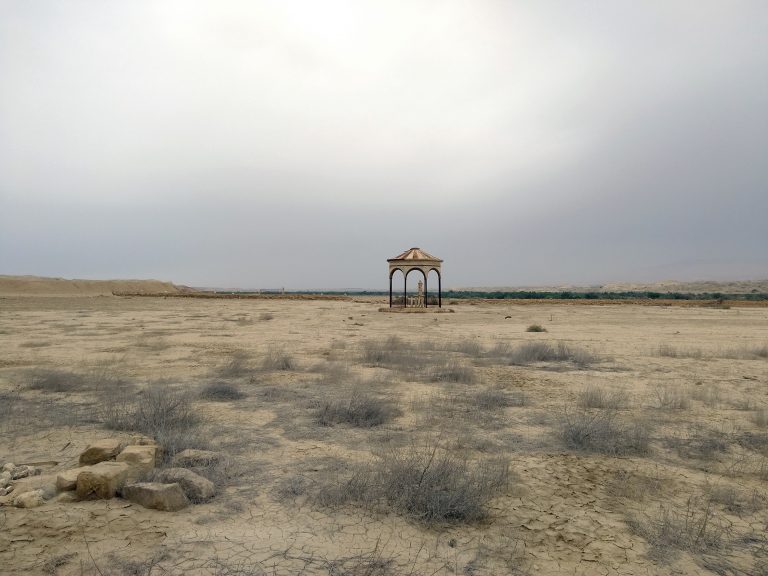 Then you would say, I guess, that even that funny utopia relies on the existence of given signs on the ground, marks of territory and ownership that often seem too natural to be part of human history, yet they are marks still, always covering one story (which we call the past) with another (which we tend to call the present), while both stories deny their absolute dependence on future tellers. After leaving your studio, I thought that your marvellous maritime squill is such a mark: a symbol in Israeli culture for the end of summer and the beginning of a new Hebrew year, it has a beautiful white inflorescence that is like a vertical clock – the tiny flowers on the tall stalk bloom and wither one after the other with the passing of time, but only for a couple of weeks. During the rest of the year the tuber is hidden underground, full of juices that are used since antiquity as either poison or medication, twin causes, but one could hardly ever uproot it entirely, you can cut it and cover it and it would always grow back and flag high up in the air at some point. For that reason, it was commonly used as a land marker around the Mediterranean, animals cannot eat it, humans cannot ignore it, the kind of substance that makes territory sustains visible permanence. You dared to pull one out, although it’s forbidden, with the bulb and the roots and the tall faint stalk and everything, the land is unowned again, no territory marked, and the plant that sacrificed its life for this subversive action is now cast in bronze. A monument for our ready forgetfulness that nothing is natural and given, save for an artist’s suspicion.

And what kind of hole did it leave behind? What about the hole, Ella? 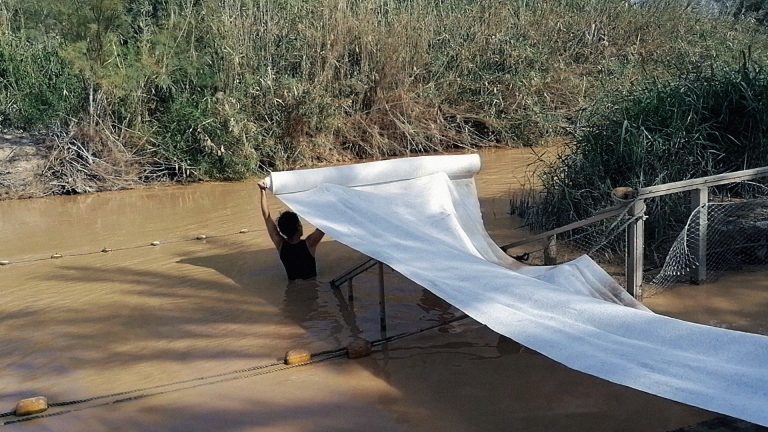 Ella Littwitz, born in Israel in 1982, exhibits at alexander levy during Gallery Weekend Berlin 2021. Her themes often revolve around borders; currently it is the one between Israel and Jordan, including the geological, political and cultural lines of tension that run there. For more information, click here.