Elisabeth Neudörfl
Out in the Streets

Elisabeth Neudörfl
Out in the Streets 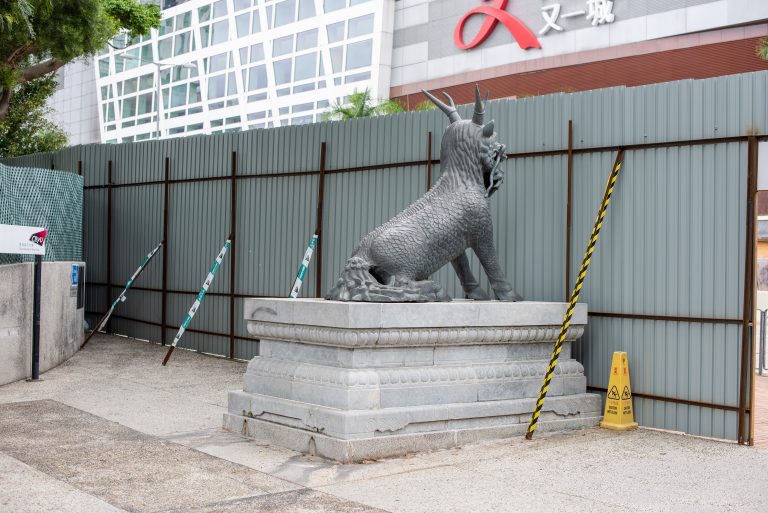 Elisabeth Neudörfl, Out in the Streets (No. 72), 2020. Courtesy of the artist and Galerie Barbara Wien, Berlin

The exhibition of her new series, Out in the Streets, is a comprehensive photographic survey of the public urban space in Hong Kong in Spring 2020. Elisabeth Neudörfl is one of the most important representatives in the field of artistic documentary photography, and since 2009, she has taught documentary photography at the Folkwang University of the Arts in Essen. In February 2020, Neudörfl travelled to Hong Kong to document the state of the city following the decline of the pro-democracy movement and the beginning of the Coronavirus pandemic.

She photographed the universities and along the demonstration routes. But it isn’t only here – at the sites of the student protests – that Hong Kong appears as a dystopian city; other pictures depict closed shops, traffic-free streets, and deserted metro stations. Above all, the graffiti and painted-over graffiti reflect the conflicts and changes in the city. The photographs are an impressive testament to a moment in Hong Kong’s history – the eerie state of emergency between protest and pandemic.

For Neudörfl – a major theme of whose work is the exploration of politically and historically charged places – the recent political situation in Hong Kong and the hardships of a pandemic acted as a call to document the state of the city. Her concept deliberately avoids the repetition of stereotypical journalistic imagery of brutality and rioting; instead, she allows the images of the street, the architecture, and the graffiti to speak for themselves. What she strives for in documentary photography is to create a link between artistic form and social analysis. 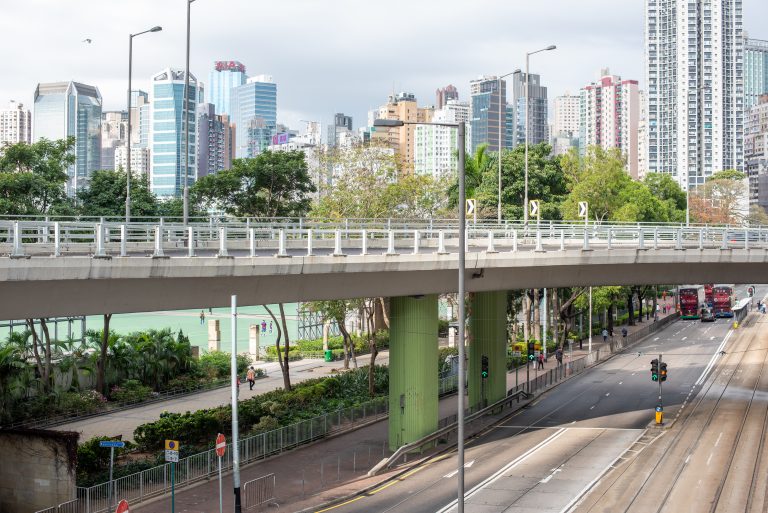 Elisabeth Neudörfl, Out in the Streets (No. 10), 2020. Courtesy of the artist and Galerie Barbara Wien, Berlin 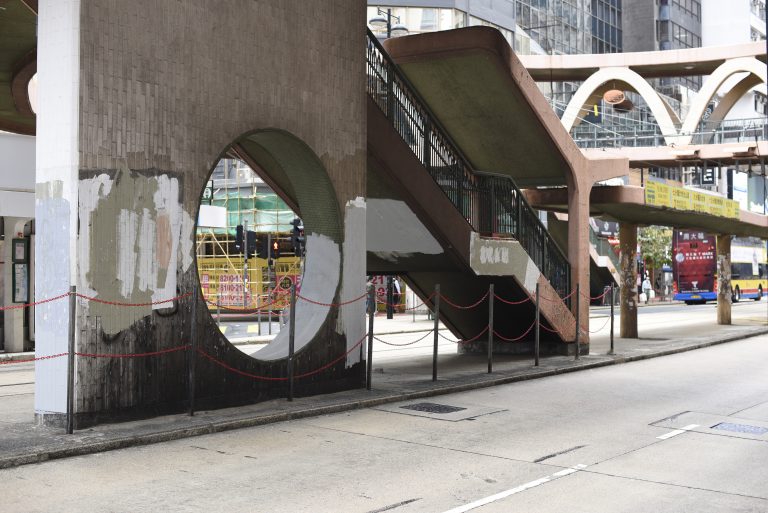 Elisabeth Neudörfl, Out in the Streets (No. 18), 2020. Courtesy of the artist and Galerie Barbara Wien, Berlin

In her work as an artist, Elisabeth Neudörfl produces extensive photographic documentations of urban space and the transition zones between city and countryside. She has used this approach in various projects in Germany and Asia. Neudörfl analyzes urban structures as a prerequisite for social behaviour and thus combines an artistic perspective with social analysis. The artist has employed a wide variety of forms of presentation and publication for her direct, relatable, and documentary photography. She arranges her black-and-white or colour photographs into sequences, thus reflecting on the limits and features of the medium employed.

From the photographic material from Hong Kong, Neudörfl selected 96 photos for an artist’s book which will be published alongside the exhibition. In the gallery, she presents 35 large-format photographs. Hong Kong’s historical context is hinted at in a few images via photographs of colonial architecture and the Bank of China buildings; photographs of demonstration routes and university grounds are the main part.

Another element – of both the exhibition and the book – comprises a video and still images depicting a calligraphy brush writing the Chinese characters for Hong Kong and a graffiti from the urban space. In this work, Neudörfl attached an action camera to the brush. The eye tracks the brush’s movements that extend constantly into the image from the right edge. Very different aspects collide in this experimental setup. Graffiti are written speedily, if possible anonymously. In calligraphy, it is about the precise placement of each stroke, whereas action cameras are used for fast, spectacular, expansive movements. Here, brush and camera are limited to the table’s paper-covered surface; all movements are slow. The concentration immanent in calligraphy opposes the ephemeral character of graffiti or the “action” supported by an action camera. The slow writing of the graffiti points to the meaning of such slogans and texts that are important for communication in urban spaces.

In the book, an additional part includes photographs of the action figure “Protestor”, which can be bought in specialist shops in Hong Kong, alongside other heroic figures such as Bruce Lee and Lady Samurai. The “Protestor” figure wears its insignia: equipment such as a raincoat, helmet, respirator and goggles.

The entire project is supported by the Stiftung Kunstfonds NEUSTART KULTUR. 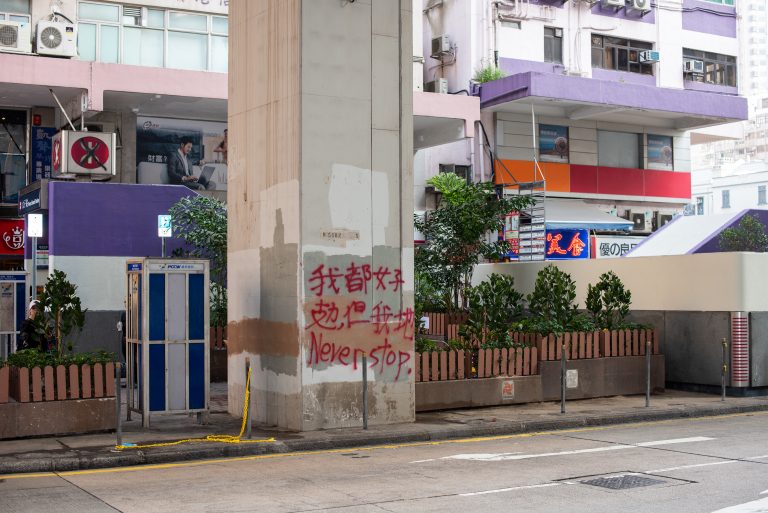 Elisabeth Neudörfl, Out in the Streets (No. 46), 2020. Courtesy of the artist and Galerie Barbara Wien, Berlin

Elisabeth Neudörfl (* 1968 in Darmstadt, Germany) lives and works in Essen, Germany. In her photographic work, she explores social, political and historical topics. Most projects deal with urban and suburban settings and include architecture, traffic, spatial structures and specific incidents. The street is both her favourite working area and an important subject matter in various projects.
Neudörfl is Professor of Documentary Photography at the Folkwang University of the Arts in Essen. After vocational training as a photographer, she studied photography in Dortmund and Leipzig and has held various teaching positions. She has published her work in a number of books, for instance: Im Krankenhaus (2018, Spector Books, Leipzig, in collaboration with Ludwig Kuffer and Andreas Langfeld), E.D.S.A. (2010, Wiens Verlag, Berlin) and Super Pussy Bangkok (2006, Institut für Buchkunst, Leipzig). She has exhibited in solo and group shows internationally; recent shows include SUBJECT and OBJECT. PHOTO RHINE RUHR, Kunsthalle Düsseldorf; SCHWARZ [ˈʃvaʁʦ], Museum unter Tage, Bochum and Photography Calling!, Sprengel Museum Hannover.
In addition to private collections, her work is held in the collections of the Sprengel Museum Hannover and the Fotomuseum Winterthur. Neudörfl also writes about photography. Most recently she finished an article for the magazine Candide – Journal for Architectural Knowledge, entitled Photographer’s Dilemma: “Good” Photography vs. “Good” Architecture (issue No. 12, published by Hatje Cantz 2021). From July 30 to November 7, 2021 Neudörfl‘s work will be on view at the Museum Folkwang in Essen where the project Im Krankenhaus about the Alfried Krupp Hospitals in Essen will be shown. This exhibition will be expanded and continue at the Villa Hügel in 2022.