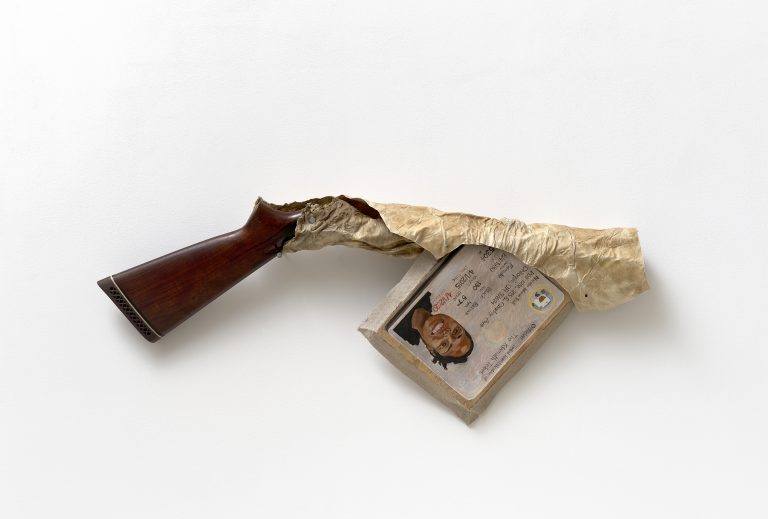 I map personal and historical landscapes allowing them to travel through generations to engage the history of violence, dispossession, and survivance; connecting and filling in gaps and forging stories to hold space for new and complex narratives to exist. 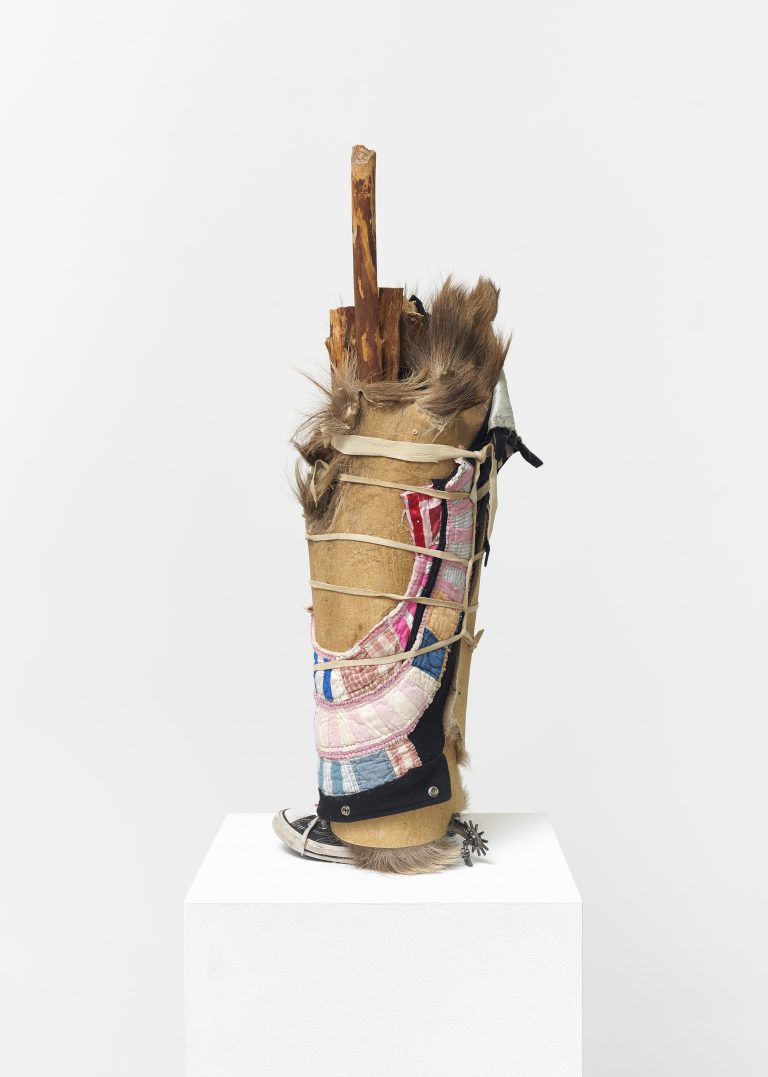 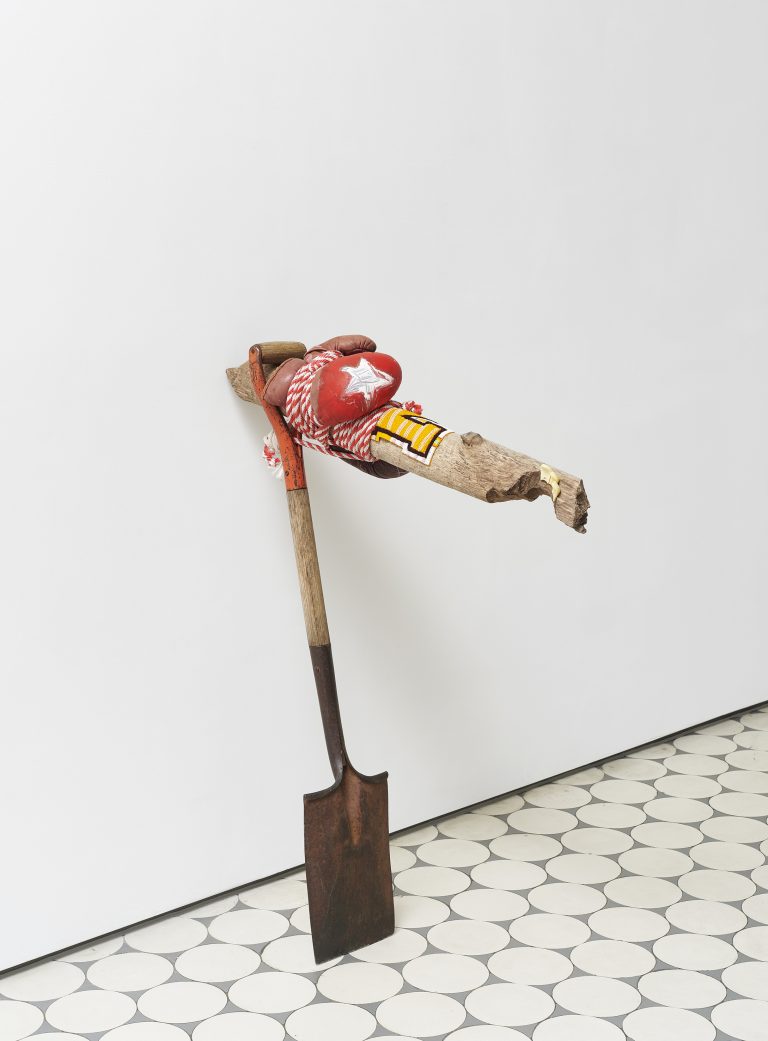 In her first solo show in Germany, Black, Modoc and Klamath artist Natalie Ball engages a sometimes liberating, sometimes terrifying specter, Deer Woman in the quotidian act of enrolling in her tribe. Deer Woman is a shapeshifter, a spirit who takes human form in order to punish disrespectful men who do not respect feminine power she punishes those who do not recognize the sacred in Native women. She seduces and kills. However, in this piece Deer Woman registers with a Federally Recognized Tribe. Why? Is she in need of a per capita payment or scholarship?  Does she need commodities? Is she running for Tribal Council?

In this work, artist Natalie Ball references her application for enrollment in The Klamath Tribes (including the Klamath, Modoc, and Yahooskin Band of Snake Indians) in 2013. She is Deer Woman, a fierce entity who is in the position of asking for a different sort of recognition. Deer Woman knows who she is, she’s acknowledged by most Tribes of North America, yet she asks to be recognized by her Tribe through quantifying her blood. Enrollment has privileges that vary from tribe to tribe, they may include rights to land, access to hunting and fishing rights, and other advantages paid for with land and signed into treaties by ancestors. In her exhibition, Natalie Ball questions the nature of these supposed privileges and asks what does it mean to have to have a government, who stole land, who killed ancestors, who is continuing to take resources, recognize you as Native? What does it mean to be “enrolled?”

Whereas the Deer Woman’s hooves always need to remain hidden for her to exercise her power, in the sculpture Toes Out (2021) they are clearly visible in their Converse. The body on the other hand is draped in a fur, quilted textile, and letterman jacket, and instead of a head, pine poles extend outward. Originally designed for basketball players, Converse is a highly symbolic shoe brand in the U.S. The spur on the back of the shoe is specific to a time and place and gestures towards movement. Power relations become unstable.

In the sculpture Gag Gun (2021), the interpretation of a Tribal Identification is coming from a shotgun barrel made from deer rawhide. It also shows the number that Ball was assigned on the basis of her blood quantum as an enrolled member of her Tribe. In this way, the works explore Natalie Ball’s complex artistic concerns, as Native identity is complex and the historiography of settler colonialism is complicated.  Natalie Ball engages these complexities and brings her own personal complex personhood to the conversation. Her work is amusing, a nexus of meaning and symbols of violence that are persistent in Native lives today. 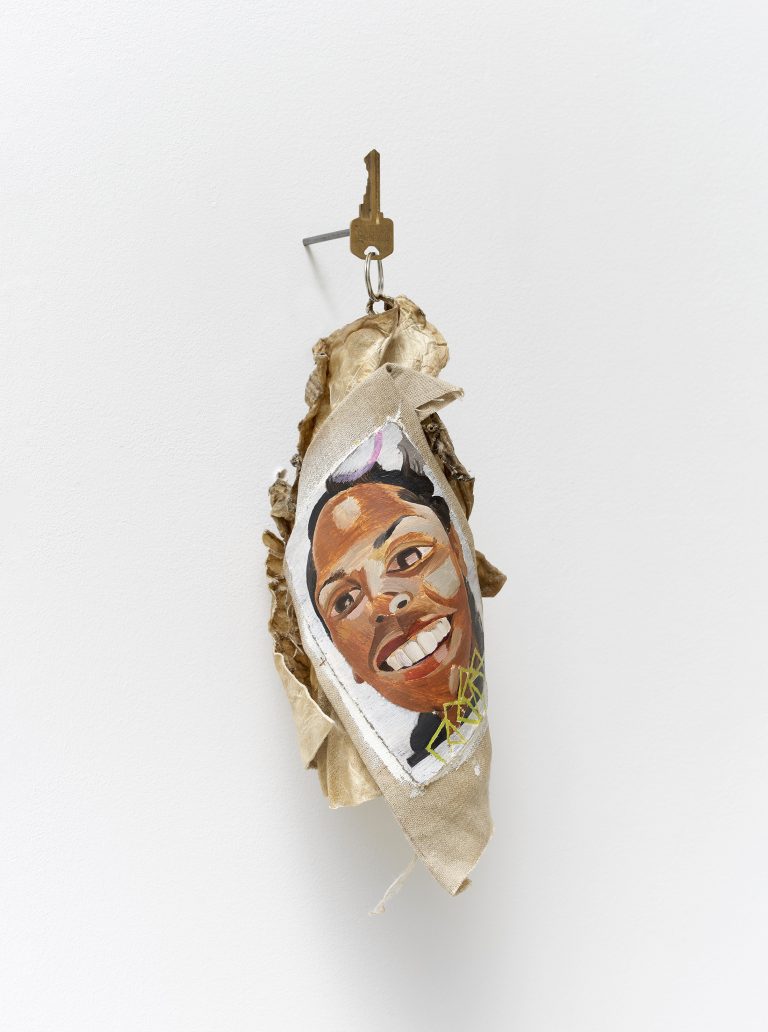 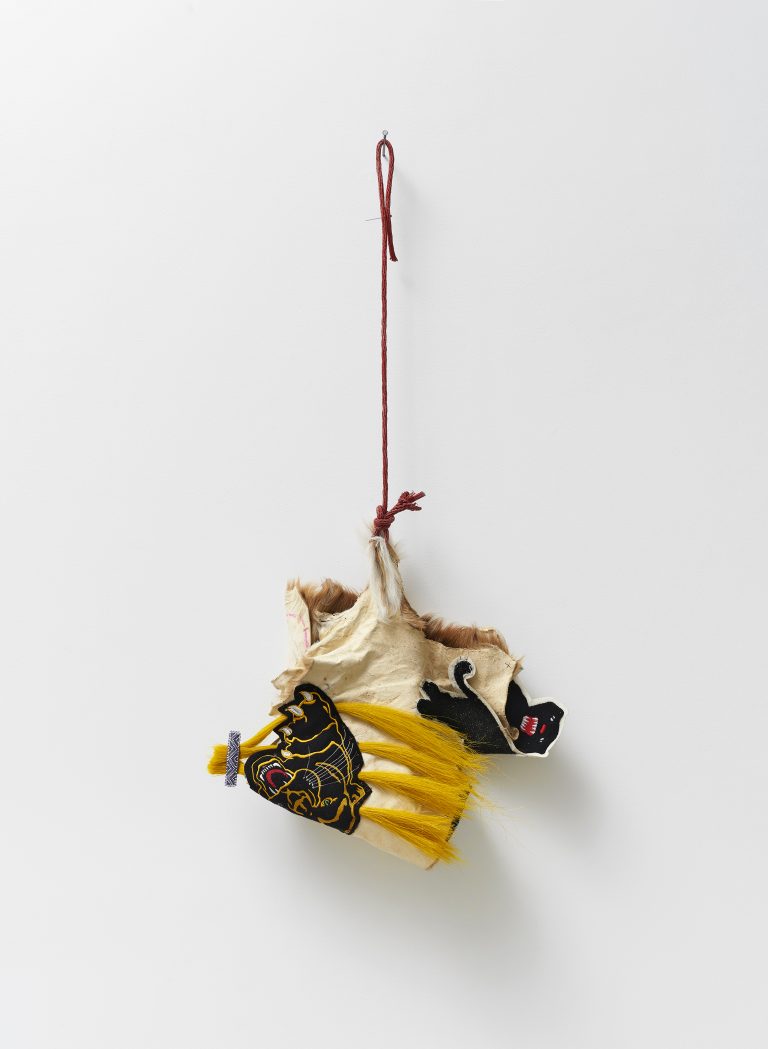 The horse, a symbol of freedom and speed, becomes a trap in Stick Horse (2021). Boxing gloves are the forehead and ears, and the crest is a wooden boot shaper. Sports teams have used Native symbols to stress their bond as settlers who have dominated Native Americans and claimed the term “Tribe” for themselves. After massive public protests, this now happens much less frequently. Yet Native mascots are still prevalent in both professional and amateur sports.

Stank Horse (2021) consists of a piece of wood that has been chewed and severed by a beaver. A shovel replaces the legs. Breaking ground, which always also symbolizes seizing one’s own land, is absurd. Yet the places where beavers created dams created places for animals to live, and also created spaces for Native Americans. Those same spaces were stolen by settlers as they intruded on Native lands.

Natalie Ball’s work is assembled from materials that are highly symbolic, personal, American icons, and often specific to Native peoples. They question the concept of tradition, is it traditional to ask the U.S. government for permission to exist? Is it traditional to ask your tribe? Is it traditional to carry a card with your number and picture to prove you are who you claim to be? It’s complicated. Every year there are stories of Native artists, Native scholars who have received accolades, grants, achieved in spaces where they claimed a Native identity that was not theirs, and by doing so, excluded a Native person from claiming that space for themselves. Yet what are we asking when we ask a person living in an occupied country if they have a right to be there? Natalie Ball thinks these questions through with her experience and humor. She isn’t afraid to invoke Deer Woman. She knows she is fierce and she recognizes herself first. This recognition is self-sovereignty, a performance of self-love, recognition, and healing. 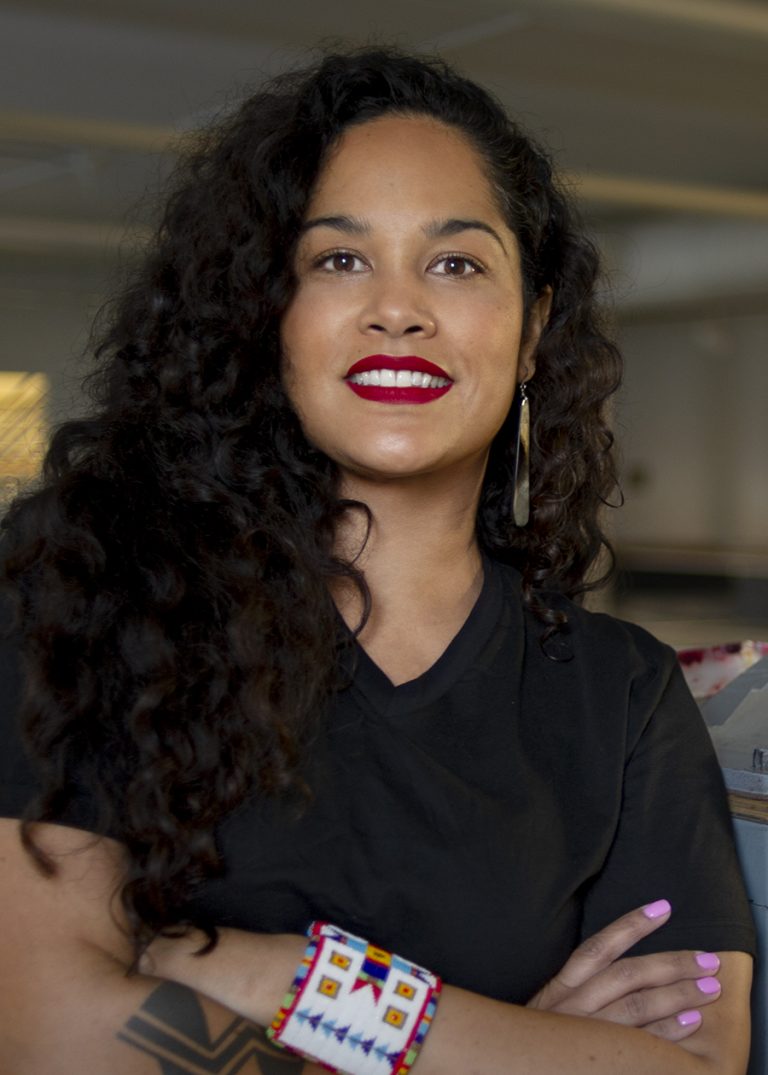 Natalie Ball (born 1980 in Portland) lives and works in Chiloquin (Oregon). She has a degree in Painting & Printmaking from Yale University, New Haven, USA.

Currently, works by Natalie Ball are on show at the Rubell Museum in Miami. In 2019, Ball had a solo show at the Seattle Art Museum (both USA).

Ball’s works can be found in the following collections: the Seattle Art Museum, the Rubell Family Collection, Miami; the Collection of Beth Rudy de Woody, and the Hallie Ford Museum of Art in Salem (all USA).

In 2020, Natalie Ball received the Joan Mitchell Foundation Grant for Painters & Sculptors and was named a Hallie Ford Foundation Fellow by the Ford Family Foundation. 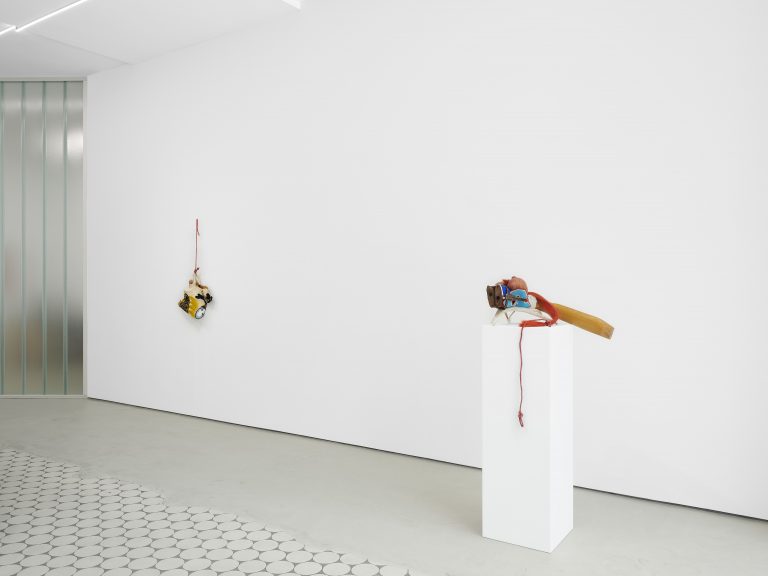 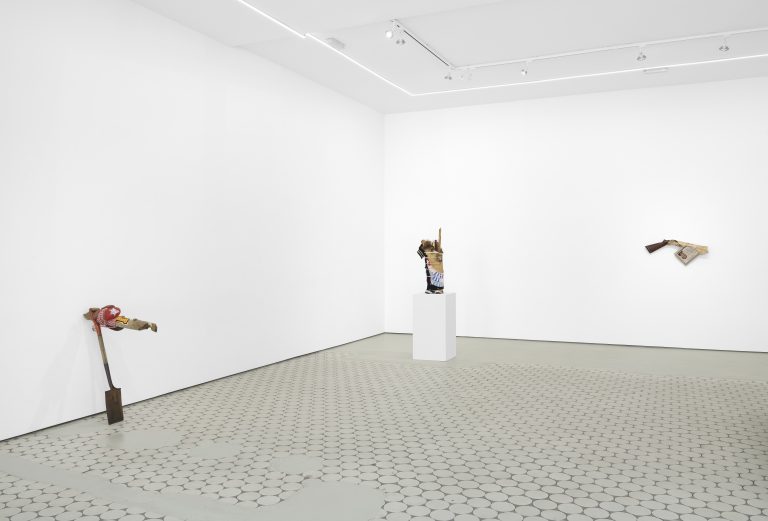