Société and David Lewis present Thornton Dial: Allegory and History, the artist’s first ever exhibition outside the United States. The exhibition will encompass all periods of Dial’s production. It presents major works that trace the development of this significant American artist’s materialist reckoning with the problem of history, historical trauma, questions of memory, and representation.

On this occasion, we flip through Dial’s 1993 catalogue Image of the Tiger (Museum of American Folk Art, New York) and re-publish some quotes from Amiri Baraka’s strong and insightful essay “Fearful Symmetry. The Art of Thornton Dial”. 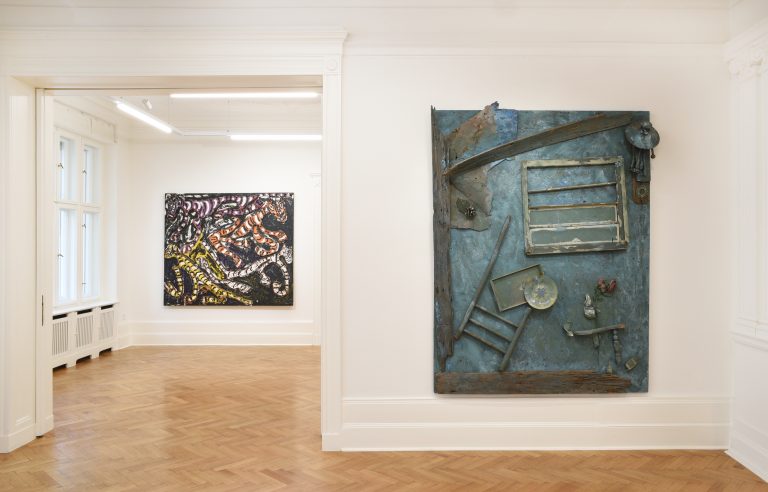 AII important art is self-taught. What intervenes, for good or evil, is the tradition the potential artist has access to. Or that has access to Him, Her, Them. In fact, black artists are always being called untaught. We are “primitives,” “nonestablishment,” producers of “low” instead of “high.” All these are social definitions. Class definitions. Definitions, in essence, of “hegemons” confirming their hegemony.  First they use the C-A-N-N-O-N of metal (sez Toni  Morrison) then the C-A-N-O-N  of paper and  bull spit.

What is missed in the class, national, racial assault and attempt to maintain the status quo of imperialism and white supremacy, gender oppression, i.e., to maintain what cannot be maintained (the Egyptian term for evil the reverse of live—is Set!), is that, indeed, Black people by history, tradition, class, nationality  are always the contrasting “other”  that gives form to Bourgeois,  formalist, Eurocentric “white art,” in the sense of how all lives are part of the other’s definition of itself. 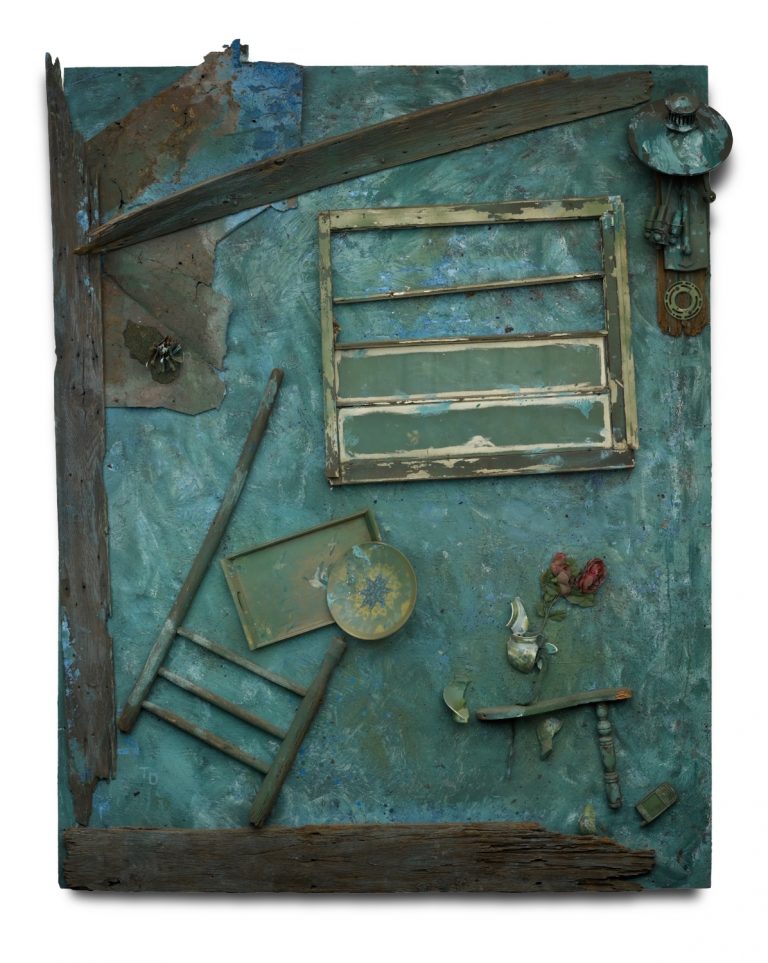 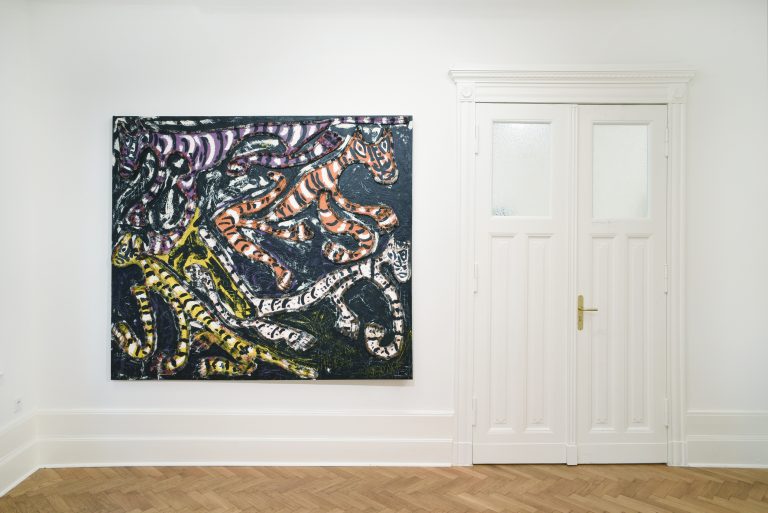 Lonnie Holley and Thornton Dial are part of the new wave of black self-taught artists, Holley from Birmingham, Dial from Bessemer, Alabama, less than an hour away. In this area of the South, the Black Belt, which is the land base of the Afro-American nation, there are thousands of Afro-American visual artists, some trained into formalist anemia, some others to near anemia, but the majority self-taught, self- expressing.

The fact of the heaviest wave coming out of the South is predictable since the Black belt South, the historic land of black majority, is indeed the font of an Aero-American culture. It was the area of heaviest concentration of the Afro-American people from slavery.

Americans do not understand American culture. Especially those trained to think that American culture is European or that it is largely “white.” America is the whole of the New World. Most of the people are Latino and are brown. The United States is a mulatto culture as well, and Afro-American culture, as Bruce Franklin says, “is at the center of American culture, not peripheral.” 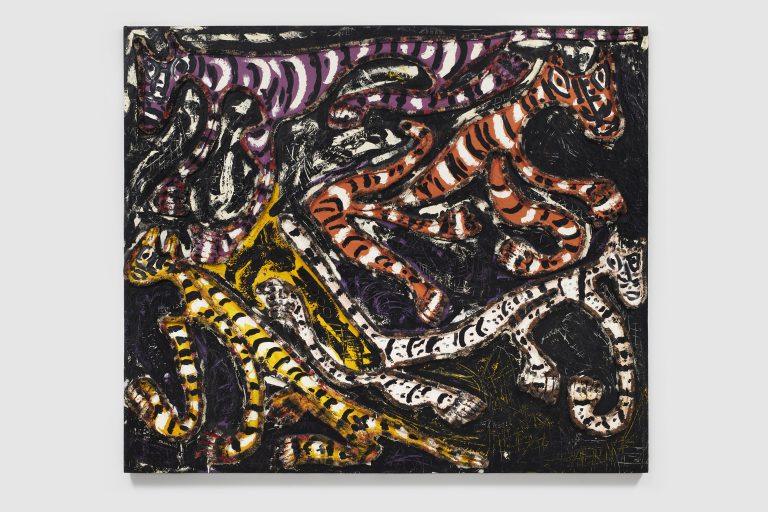 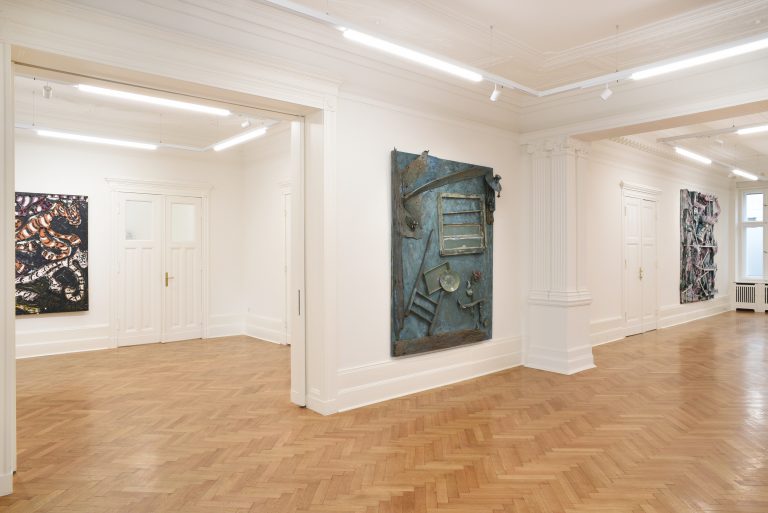 So Thornton  Dial, for instance, a forced retiree from a Bessemer, Alabama, iron- works, who worked all his life with his hands, could turn more directly to his art, which he had also been doing for years, even while he worked for the company. Like all workers he had, without the art, “nothing to sell but the muscle in his arm.”

The practice, the praxis, of art making has moved Dial’s self-taught expressions of his earlier efforts steadily toward a depth and sophistication of utterance, image, statement, meaning, symbolism, signification that will shake you once you are Ally, or more fully, hip to it.

Dial uses carpet materials, housepaint, seemingly garish, conflicting, and naive materials and methods. Life Afro-American culture in general, use whatever you got. (Niggers stealin’ from the smokehouse, stealing from the henhouse, steal any and every— why? Slavery is still legal. Freedom is illegal!) We are not self-taught but world- taught, wherever we are in it. We register what comes in to us and circulate it like blood and breath.

Dial is a strong-looking mustachioed (you bet) black worker still. His hands look like worker’s hands. Strong massive fingers. He works in a shed. The works, now that he has uncovered, grow daily more awesome, in stacks, and lined up. Dial raps about here. About the black Belt. About Niggers and White folks and the funky, funky world. 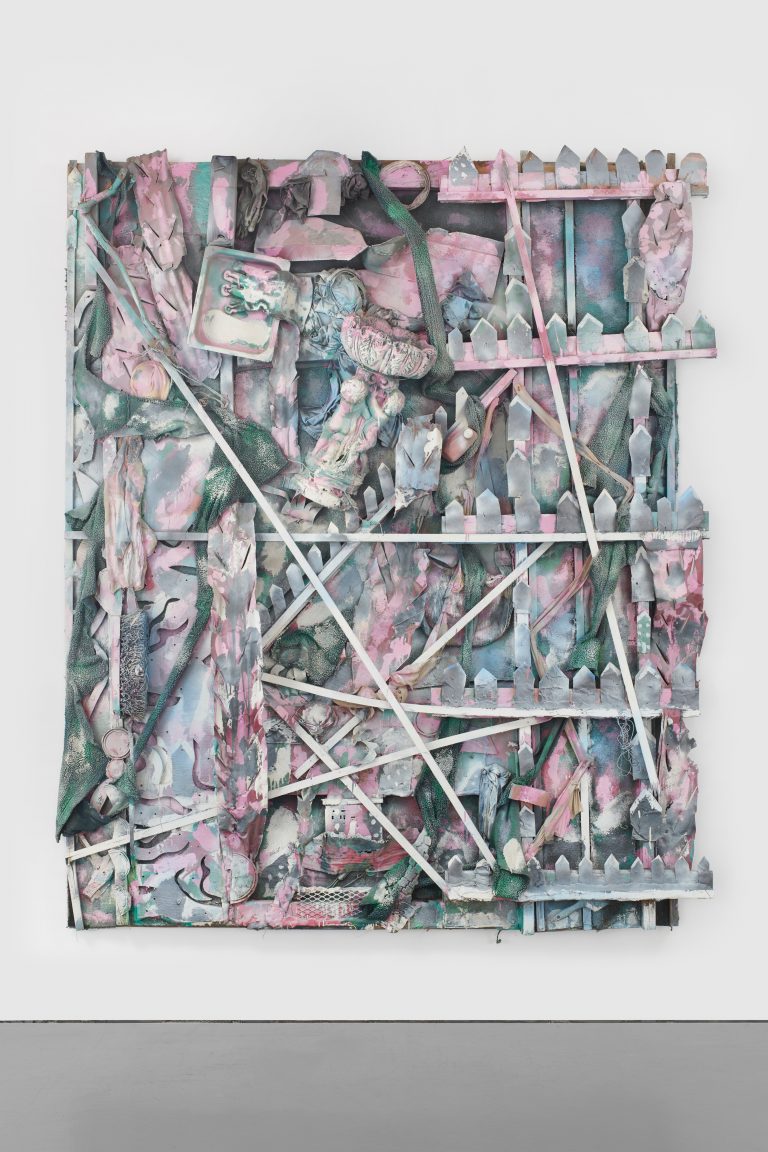 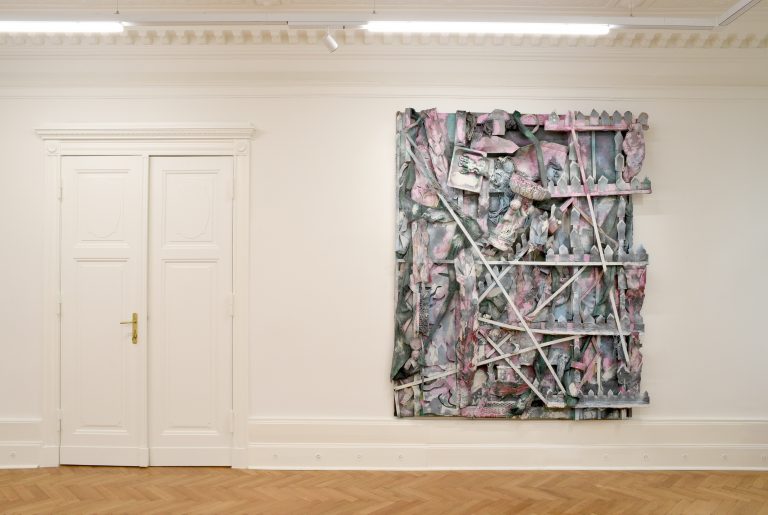 Dial signifies, plays the dozens, the African Songs of Recrimination; puts down what needs to be put down. He knows that his feelings are his own and gives them to the wood or metal, he doesn’t have to tell you with words. His words are colors and shapes.

But like any conscious, intelligent person, Dial don’t like what is happening here or what has been happening. Everything about his work is in swirl, fixed or moving, degrees of explosion, implosion. And his rap is “cold-blooded,” like they say.

His tiger image (see also his first exhibition catalogue, Strategy of the World, 1990) is the nigger-beast-self and enemy, and even when this image is not present (as in a show that contained some of his works in Denver, where I first gave parts of this essay in 1992), the same power, the same themes adhere.

“Fearful Symmetry,” indeed. Like Blake, symbolic, a being fierce yet contained by being itself, and not everything. A being living in a jungle, with the capacity for self-determination, self-respect, and self-defense but not always able to achieve these. A creature many times hunted; “human beings” be ‘fraid of him. Sometimes called Man Eater. In India humans wear masks on the back of their heads, like human faces, so the tigers can’t sucker them.

Dial’s world is the real world of black feeling in a place where that is denied as gospel and punished as practice. If everything Dial was saying was fully known he couldn’t get no show!

It is about slavery, national oppression, white supremacy, Love over hate, Life over death, Seeing over blindness, Feeling over numbness. 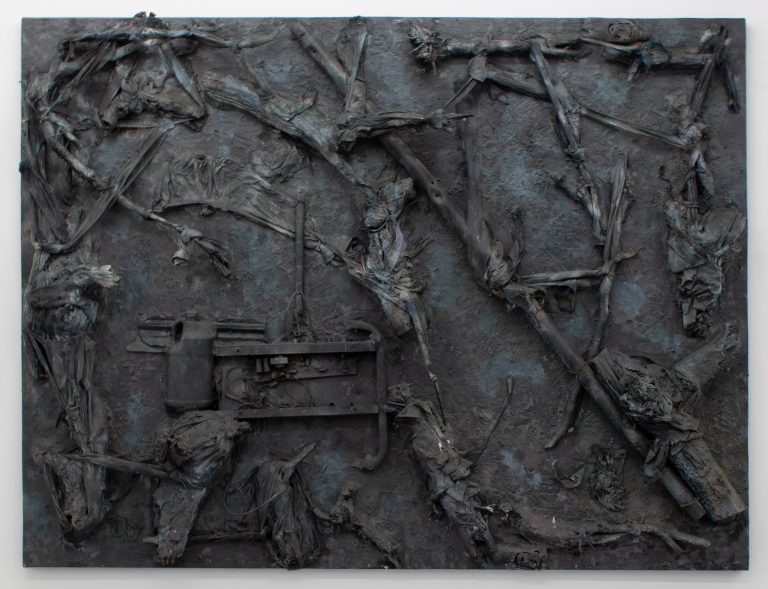 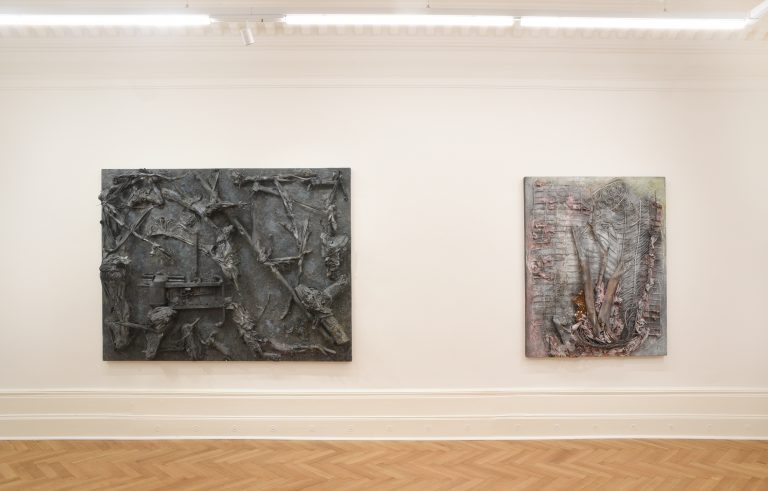 Dial, on first glance, is, as we say in the movement, “the basic Blood”, that is, the mass man of the Afro-American nation. A worker, and from advanced production, a pullman car-making iron plant, where he worked for thirty years.

Shaking his hand, you are aware immediately or the iron hardness of it. Like all those industrial slaves spread throughout the world. Hands of iron, their whole bodies compact and exercised to athletic slenderness against their wills, without Jogging or aerobics.

They carry a kind of reticence, in a sense looking at things as closely as they can, almost squinting their eyes to make you out, or whatever. Refusing to be cavalier in their rationalizations, seeming somewhat conservative because of this. Except, as you listen, you realize this is not the case. It is just that they have been taught by a long and painful history of exploitation and oppression not to be glib and not to be careless.

But also you realize, almost from the beginning, that Dial is listening closely and evaluating what you say and what he is going to answer. The voice neither loud nor soft, his eyes pointing directly at you, talking pleasantly, about Bessemer, his job, how he gut into “Art,” and what he is saying in the works.

You realize, thinking about  the works, and history to the man’s engaging unfolding of his life to you, that this is the kind of razor sharp intelligence and evocative imagination that millions of these advanced workers bring with them. 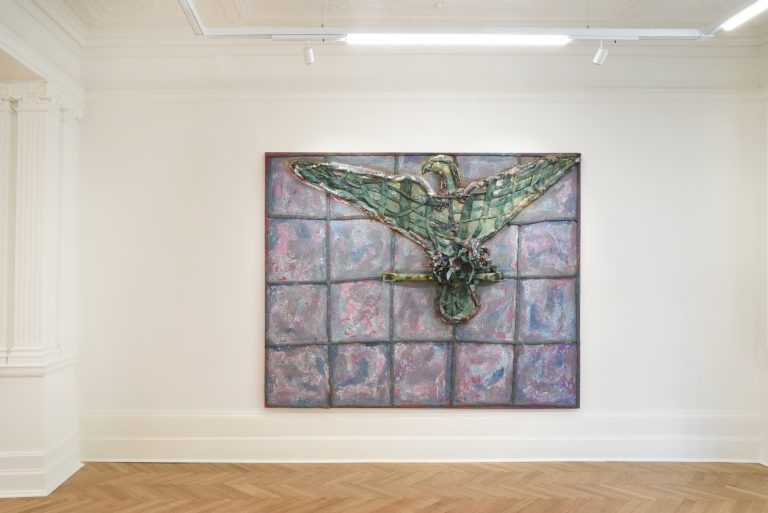 One important idea that should come out of Dial’s show and the ones he will have, and the recognition he eventually must get, is that he represents a broad spectrum of black creativity, particularly in the black South, This is so important because the South is not only “the scene  of the crime” (slavery), but, if you read Du Bois’s Souls of Black Folk or, for that matter, the most recent U.S. Department of Commerce maps and statistics on the Afro-American people, you’ll find out that, even in 1992, six out of  ten black people still live in the South, and eight out of ten were born  there (no matter what they might say now).

So that it is truly the land base of the Afro-American nation in this country. It is the heaviest source of Afro-American culture and history in the United States. And even after the mass migrations out of the South at the end of the nineteenth century, by the 60s, not only had that migration out reversed so that there were larger numbers of Aero- Americans returning to the South than were leaving it, but, even after fifty years of “get- ting their hats“ and splitting  the South to go north because they thought, like Richard Wright in BlackBoy, that that was where their lives “could be lived with dignity,” by the end of the 60s there were still more black  people in the South than anywhere else. 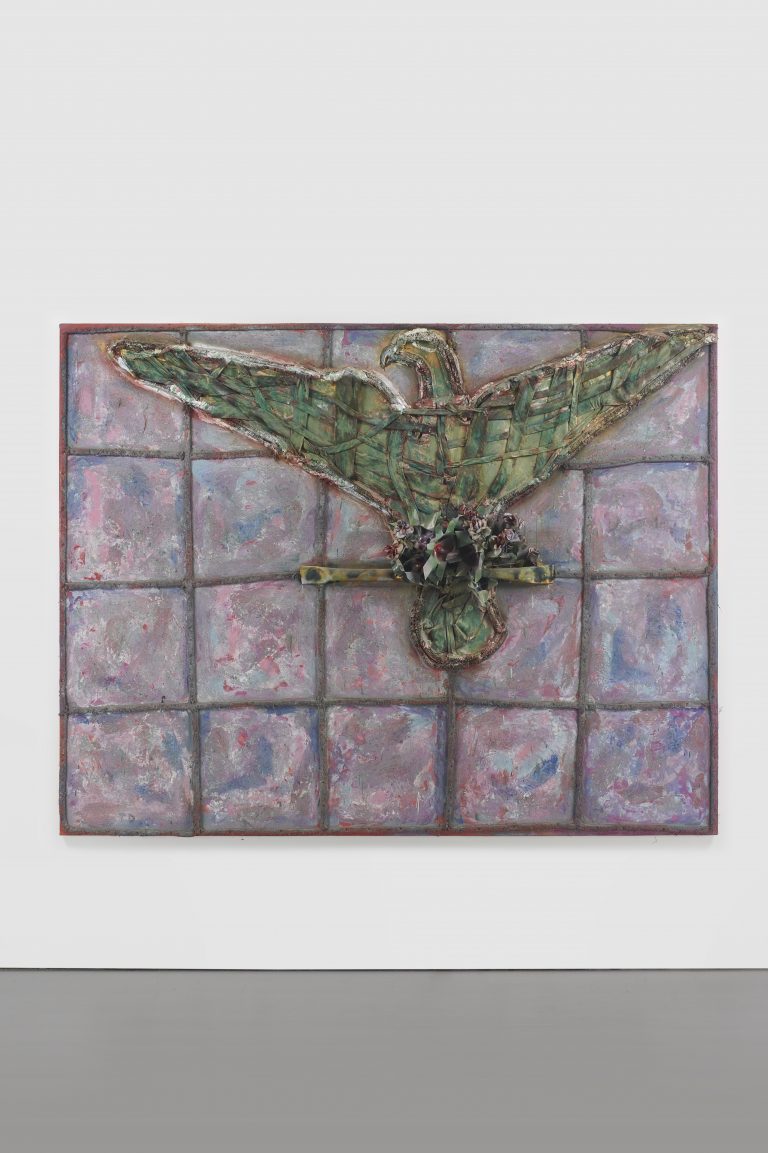 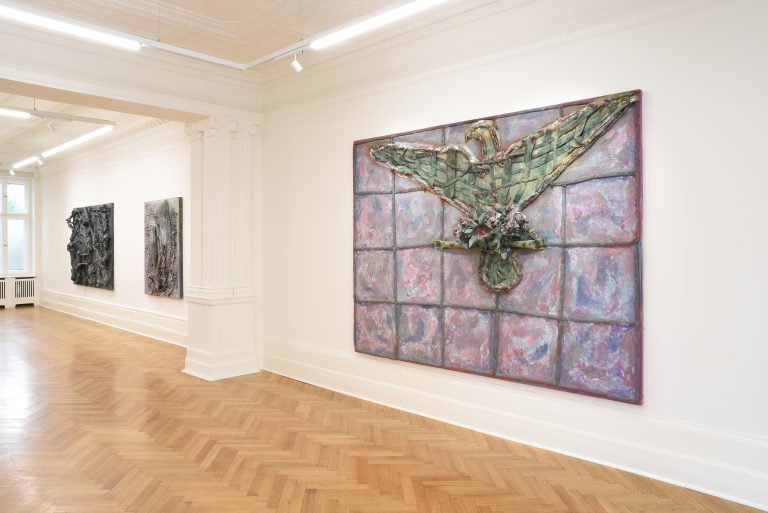 One thing about Dial’s works is that they might be anything. They might look like anything, they might be made of anything. They are at once seemingly a mixture of narrative and signifying. The images are not so much “symbolic” in the sense that they are supposed to represent something else as they are merely a Blood signifying in form and color. Signifying in the sense that the images are what they are but say more or go deeper. I mean, sometimes after I look at the image, the jagged maelstrom of color, fabric, rope, rug, wood (it could be anything), I hear the word “shiiii  …” go through  my mind. Like Dial had said what he was going to say  and at the end of  it, just as it bounce off your eyeball there is the punctuating  Afro-American scatalogical benediction, like Magic might stuffing one night in the face of the whatevers, the release of breath and tension at the dismissal by example of the proposition that you cannot do (or maybe even conceive of  doing) whatever,  there is upon the completion, that “shhiii … “

You see and hear! Like a juxtaposition of the eye and the ear, along with the parade of other sensuous connections the work makes (certainly, the tactile, the mounds of color, paint that can actually  be touched). Like you can feel the tigers 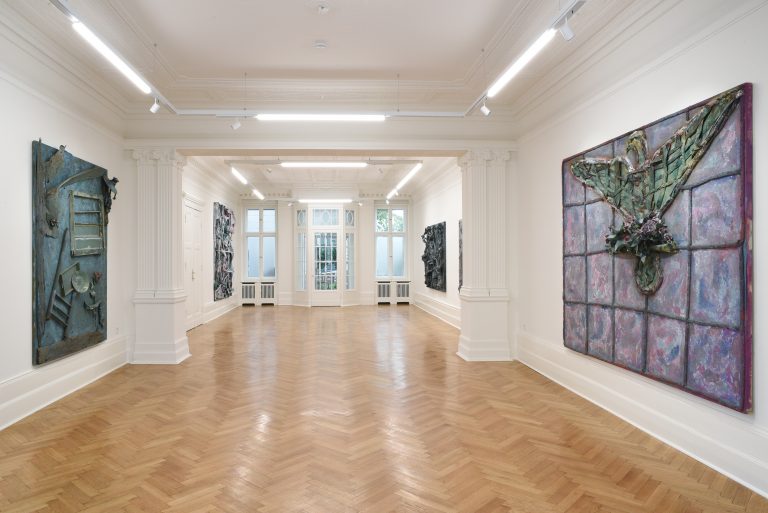 Dial seems to render his recurrent idea of the chaotic and dangerous human society no longer  as  the awed or terrified or disdainful spectator surrounded  by those Kafkaesque forests of the night. He is moving to identify the elements that make the forest a jungle and metaphorically fixed in permanent night.

There is a sense to Dial’s works, particularly the earlier ones, of being surrounded on all sides  by awesome, unknown destructive forces. Monkeys, dogs, funny-looking little white men, midgets, ticks, man-eating flora and fauna, and mysterious ”ladies“ of all hues. He tries to explain them by explaining himself.  Showing himself in relation- ship to them. But he has begun to probe into the chaos, to pinpoint its functions.

He has know  all his life about struggle. A  great many of his works identify that quality of his life, but also he keeps a running account of how  that struggle changes, or is redefined, or reemerges, of higher levels of struggle. Struggle in different contexts though the stakes might be similar. 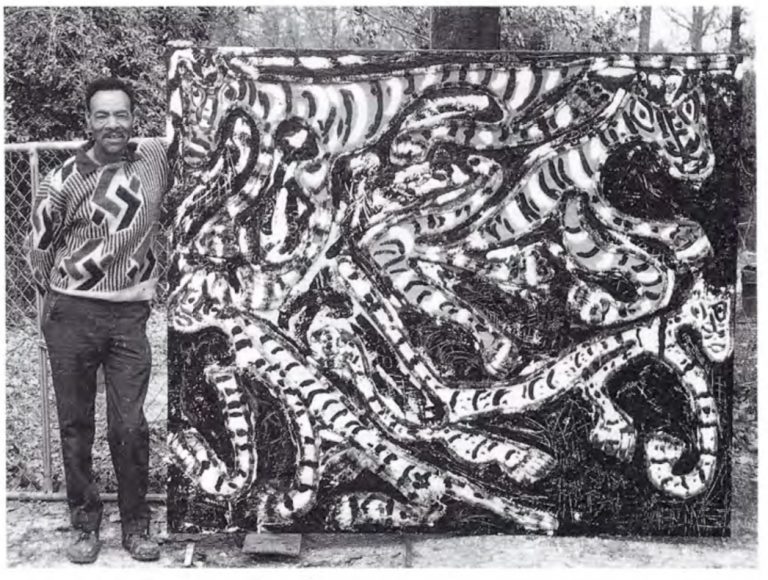 Thornton Dial with All the Cats in Town, 1993