Monika Sprüth and Philomene Magers are pleased to present a substantial exhibition of new photographs by Andreas Gursky, his first new body of work in almost three years, in which he takes up a range of themes that he has investigated for decades. Despite the continuity in theme and subject matter—our built environment, humankind’s impact on the natural world—the new pictures embed his analyses in current events, offering altered settings and situations to explore. 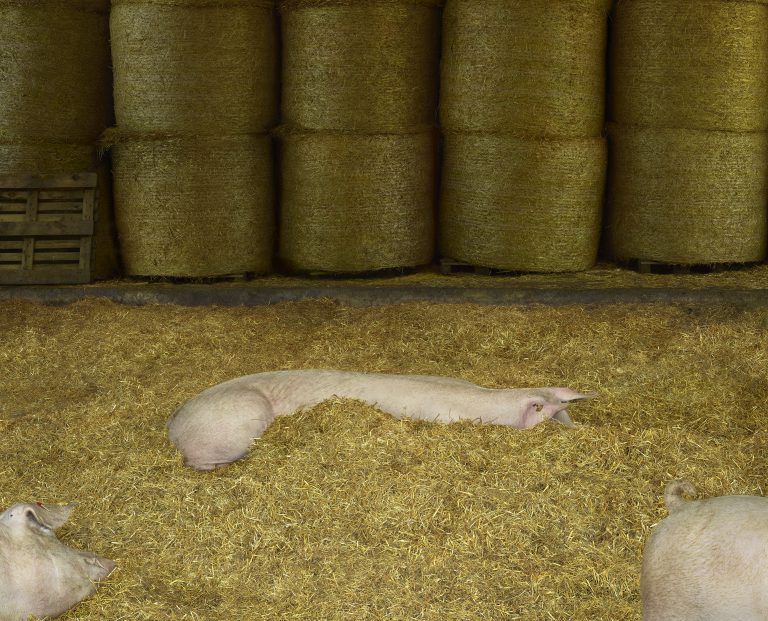 Rhine III (2018) revisits his important work Rhine II (1999)—the dimensions, setting and composition of both are all almost identical. And yet, just twenty years later, the mood is drastically altered. The drought of summer 2018 reduced the river to a record low, and the new picture offers a dystopian vision of the once flourishing river landscape. Cruise (2020) also brings to mind an important earlier work, Paris, Montparnasse (1993). The same grid-like structure appears, but instead of a large apartment building, here there are hundreds of windows on the side of an enormous cruise ship. As with the Paris picture, Cruise shows a human environment atomized into a modernist architectural grid.

Politik II (2020) directly follows Gursky’s work Rückblick (2015), also included in the exhibition, to create a new series that looks at political structures. Over a period of several months, Gursky closely observed the activities of the members of parliament in the German Bundestag. Politik II features thirteen politicians in animated conversations, the figures filling the entire width of the picture. The arrangement and number of people in the image, as well as the fact that only one person stands aside, looking into a newspaper, emphasizes the echoes between Gursky’s picture and a typical depiction of the Last Supper. While the humor is only faintly perceptible in Rückblick—as expressed, for example, in the plume of smoke above Helmut Schmidt as an identifying feature of the former chancellor—the humor is bolder in Politik II. Who takes on the role of the savior in this implied depiction of the Last Supper? Is it Angela Merkel, who has moved slightly out of the center of the picture, or Anton Hofreiter, whose shoulder-length hair alone seems to qualify him? 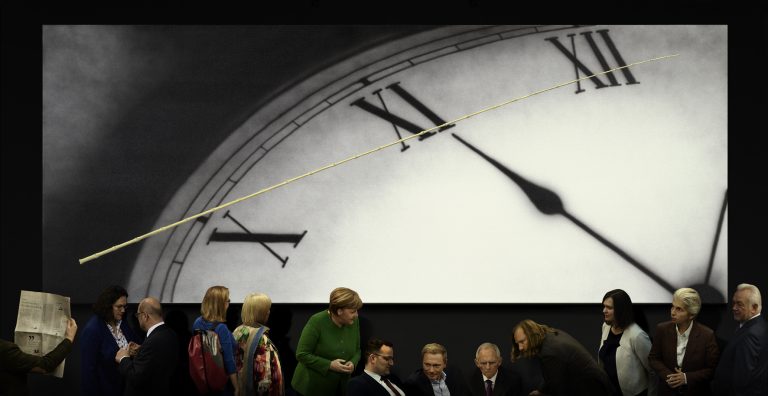 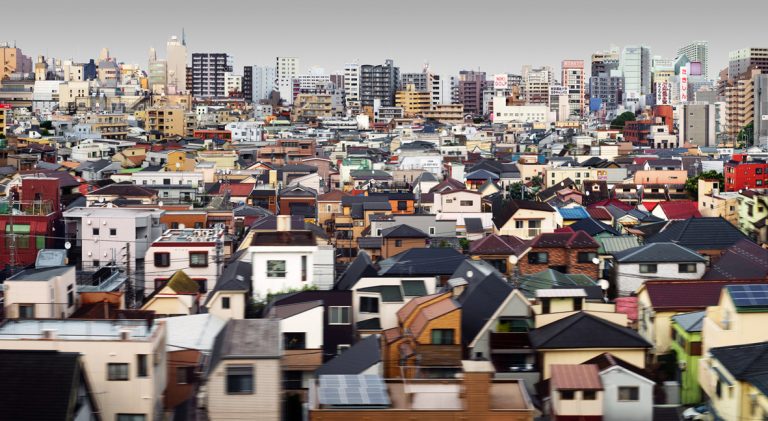 In October 2019, Gursky’s portrait Jonathan Ive was unveiled at the National Portrait Gallery, London, showing the Apple designer in the company’s new headquarters, which was designed by Foster + Partners in close cooperation with Sir Ive. Gursky made a second photograph, Apple (2020), at the exact same spot, which will be shown in the Berlin exhibition. Apple features iPhones and various generations of computers in the same position as the designer in the earlier photograph, but placed on pedestals and lined up along the curved window as if in a museum.

The urban living space, and the constant balancing of efficiency with quality in contemporary life, is one of the themes Gursky addresses in his work Bauhaus (2020). The functional building with the logo of the DIY store, commonplace across Germany, is shown by the artist in its cold and precise aesthetics, which at the same time brings to mind the famous art school in Weimar. The functional, minimalist architecture designed for modern living is diametrically opposed to the mood in Pigs (2020). Here, Andreas Gursky portrays the animals in an unusual close-up, seemingly warm and comfortable in a bed of golden hay.

Alongside his new works, previous pictures such as Antarctic (2010), Utah and Tokyo (both 2017) are also on display, and this exhibition overall offers a chance to observe a range of continuities and new developments in the artist’s oeuvre.

Exhibited for the first time at the Berlin gallery, the group of new photographs will join many of his most iconic works for the artist’s retrospective at MdbK Leipzig in December 2020. 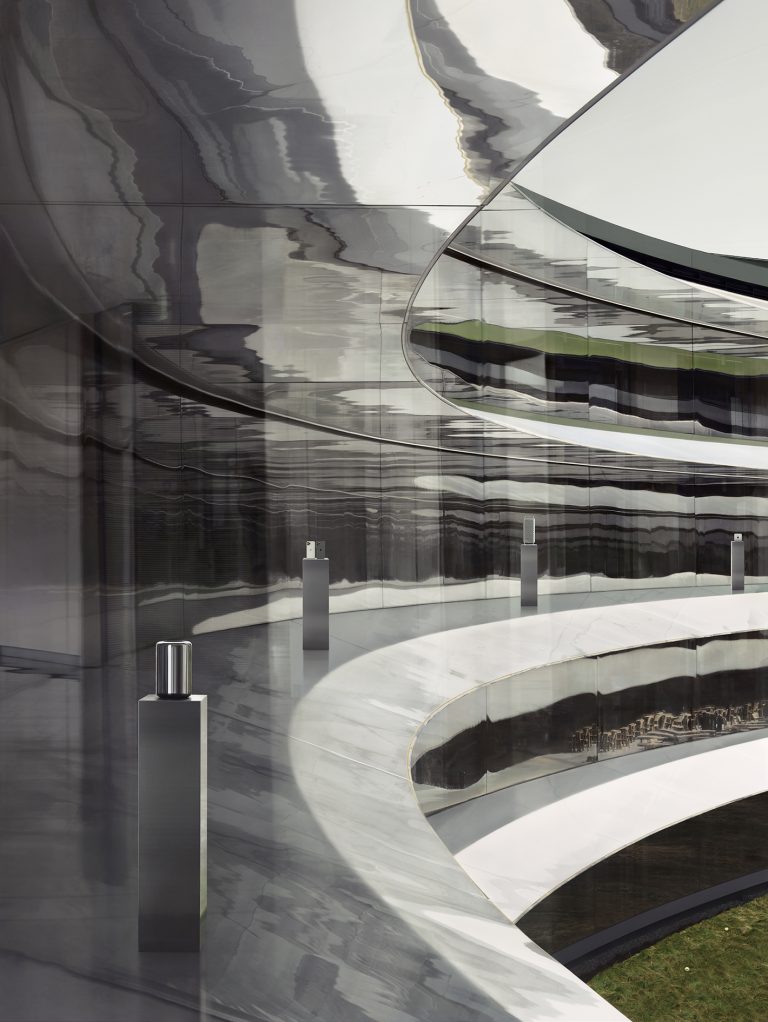 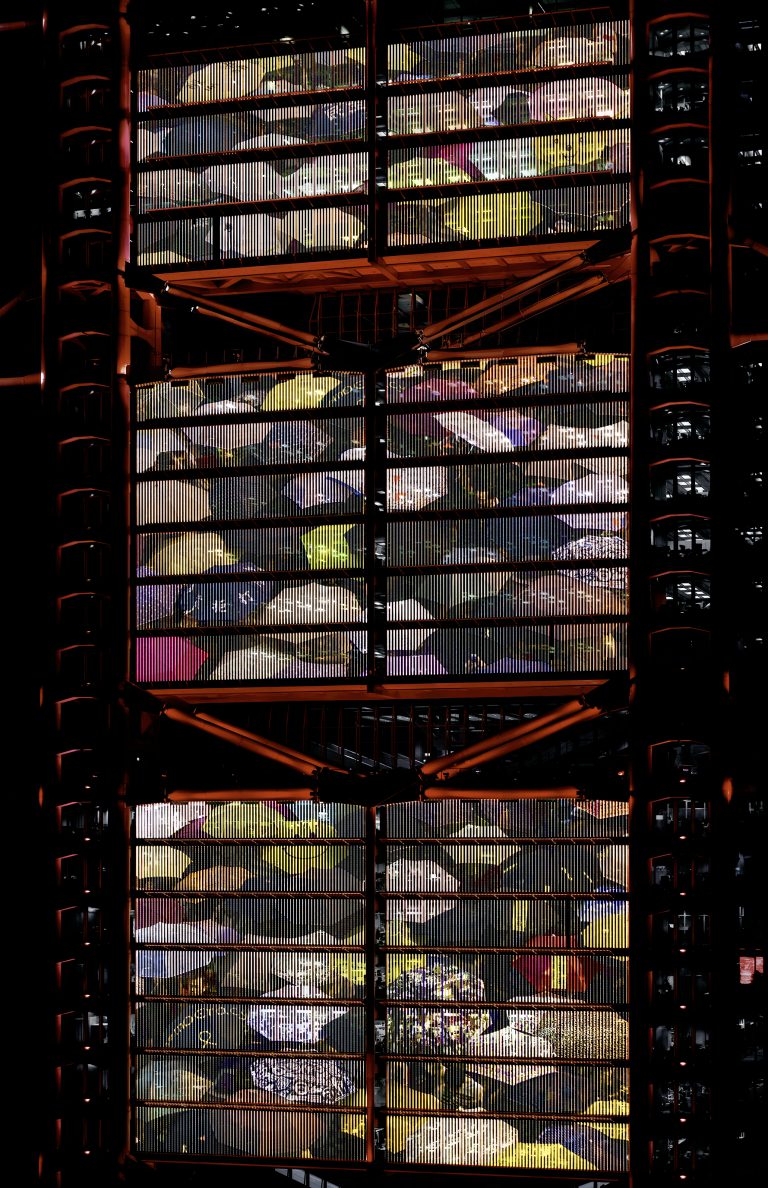