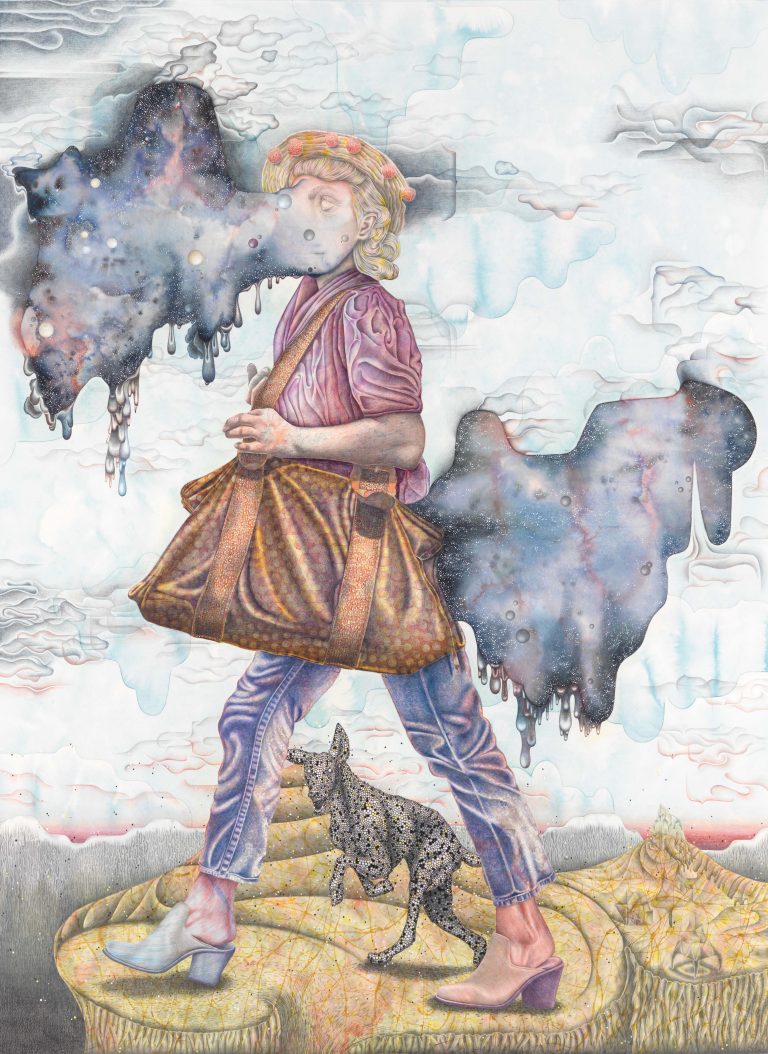 Being dramatic has the advantage that you give your counterparts the chance to be dramatic themselves.

Dirk Lange (b. 1972) draws richly detailed, multilayered works in muted colors and large formats. His dreamlike scenarios present viewers with people or magical, hybrid creatures in the midst of seemingly incomprehensible or paradoxical actions. On closer inspection, a variety of structures then emerge: patterns reminiscent of molecular orders, but also character fonts, geometric or physical shapes resembling celestial bodies. The pictorial narrative is therefore situated between smallest and largest, between micro- and macrocosm. Overlapping, rhythmic details reveal the enigmatic pictorial narrative itself to be part of self-contained ornaments. The depicted action is seemingly less an expression of rational motivation than a result of the inherent movement of cosmic orders. The title of the exhibition, Saint Fauxpas, imbues the mishap with religious meaning, alluding to a deeper story behind our misguided actions. 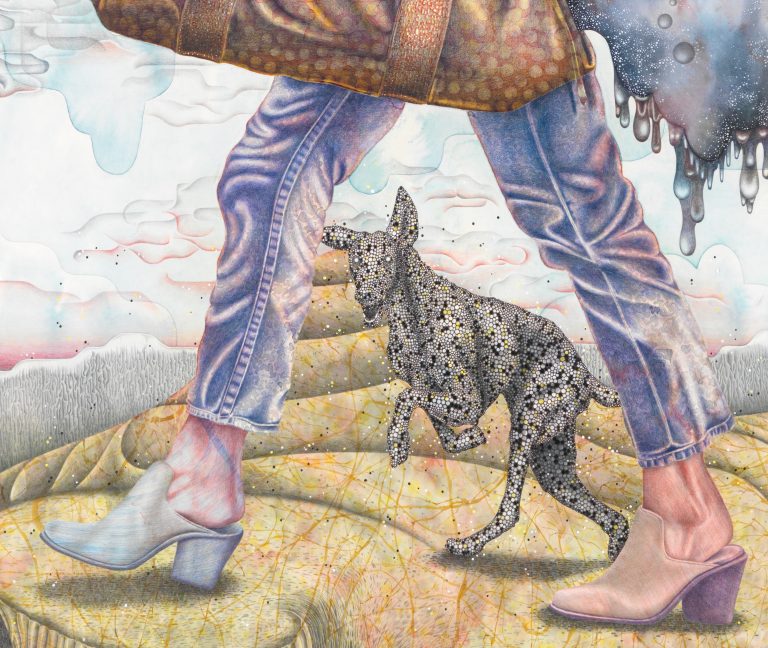 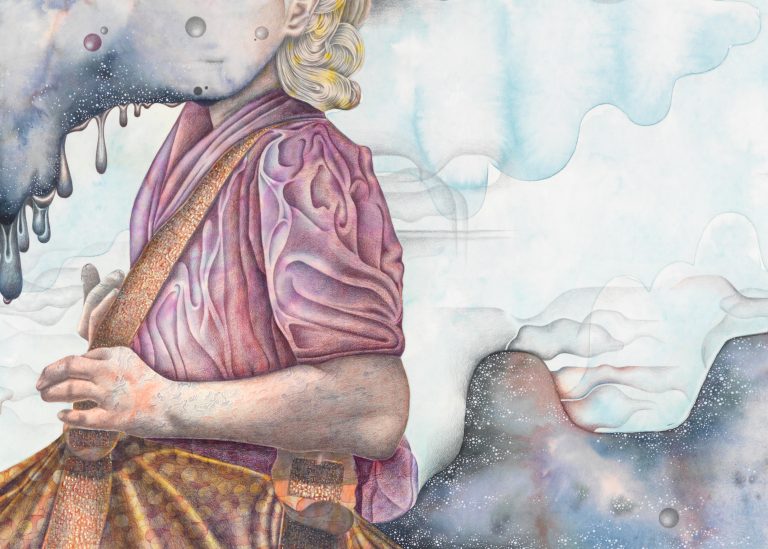 Where no plan holds together our being and working in the world, we are dependent on improvisations. The world is becoming the construction site that we find at a time when all the blueprints have already been lost and destination can be identified from the found fragments. Believe it or not, that’s not always an advantage. 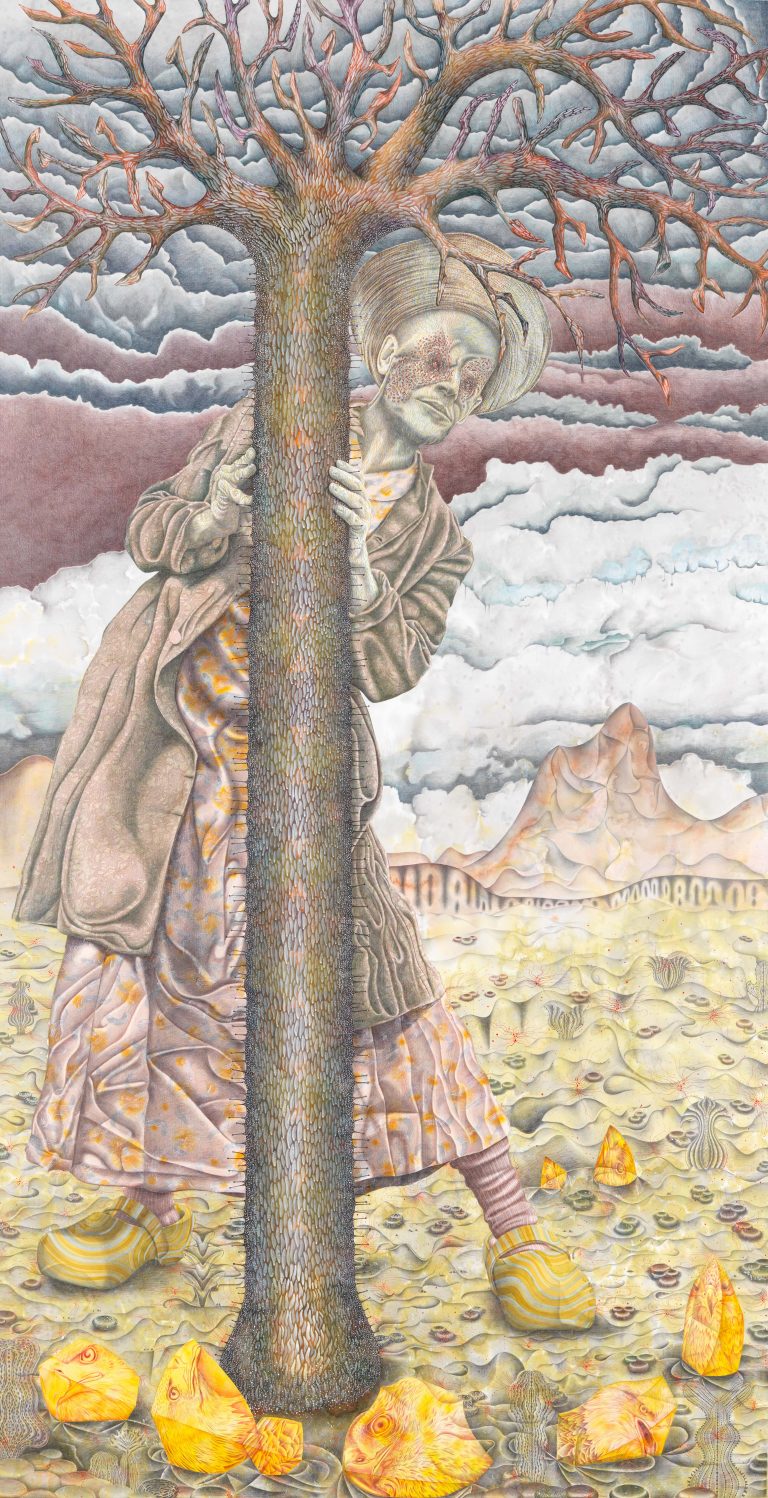 Eigennacht (One’s Own Night) references the tarot card of „The Fool“: a figure with a
bag, gazing up at the sky, seemingly strolling without looking through a barren mountain landscape into an abyss. Portrayed in Lange’s picture, however, is not a young man with a bindle and sack of belongings, but a woman with a travel bag. Nighttime clouds and celestial bodies are spilling out of her head and bag, as if a universe was being born. The “fool’s” stride appears static, the background simplified geometrically. Thus, it remains open the extent to which the person, who is spreading her own “nighttime sky” in front of her, is being “foolish” or whether she is instead creating a world of her own.

Wilderer (Poacher), a picture that at first glance may remind one of fairy-tale illustrations from the Orient, depicts a man in a coat, long skirt, and clogs, standing behind a leafless tree as if seeking protection. He has placed in front of himself a row of crystal-like, yellow eagle heads: The Wilderer presents his offer of unusual finds, but retreats almost coyly. The desert-like environment contains organisms such as those found on the sea floor and flat, cactus-like plants. The man’s demonic visage, seemingly covered by an ulcer, but also the thorn-like branches of the tree before a sky of towering clouds, invest the upper part of the picture with an ominous energy. 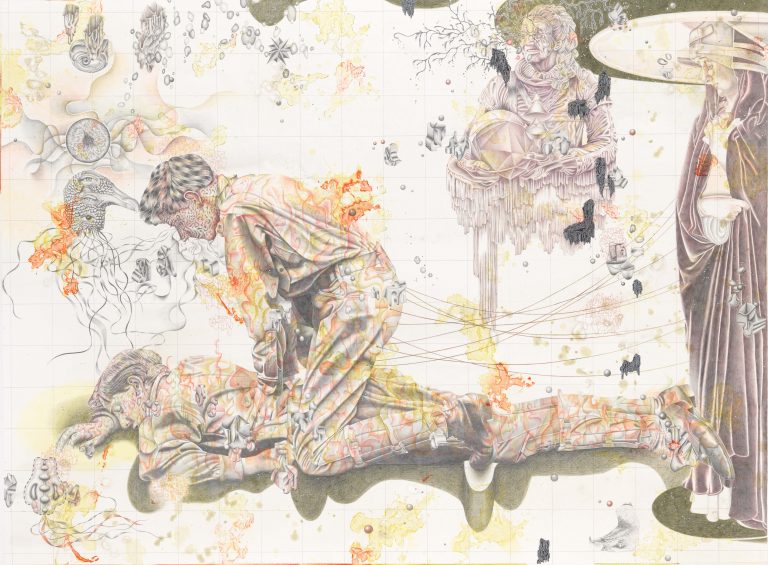 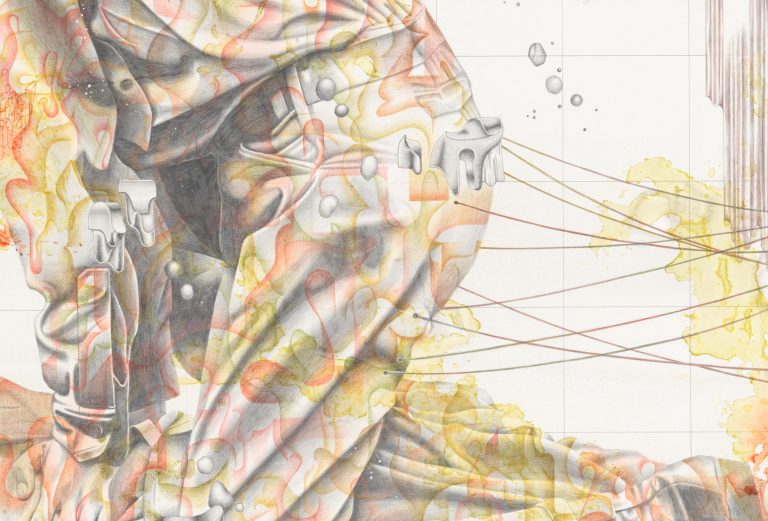 Ein Fall für die Jungs (A Matter for the Boys) is perhaps the most open-ended picture of the exhibition in terms of content and form. It shows two young men in soldiers’ uniforms; one lying on his stomach, the other kneeling over and messing with him. Whether he is searching his pockets for anything useful, giving him medical help, massaging him, or whether the scene is even homoerotic, is unclear. A Madonna figure stands on the right edge of the picture; above the boys on the right is an elderly female astronaut. A square grid runs through the picture, giving it, together with the diffuse forms, a cartographic character. At the same time, in large areas of the picture, crystal-like and planet-like structures create a discreet rhythm.

In all of Lange’s works, exacting details and compositions within the composition allow viewers to slowly unlock the complexity of meaning. Concise and dense constellations of forms produce a distribution of pictorial centers, each of which function like a picture within a picture, together creating for the eye an almost infinite variety of paths through the whole. As slowly as the works are created, they are also able to hold viewers for a long time, so that they, following their own curiosity, can delve deeper into the riddles of the imagery. 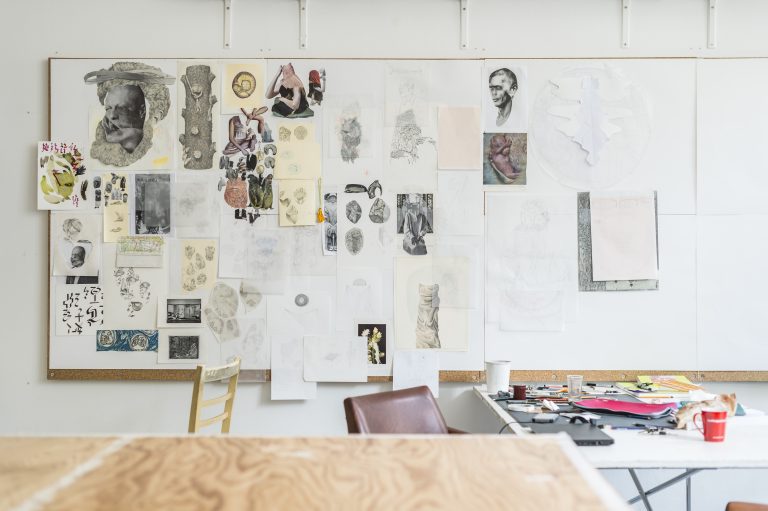 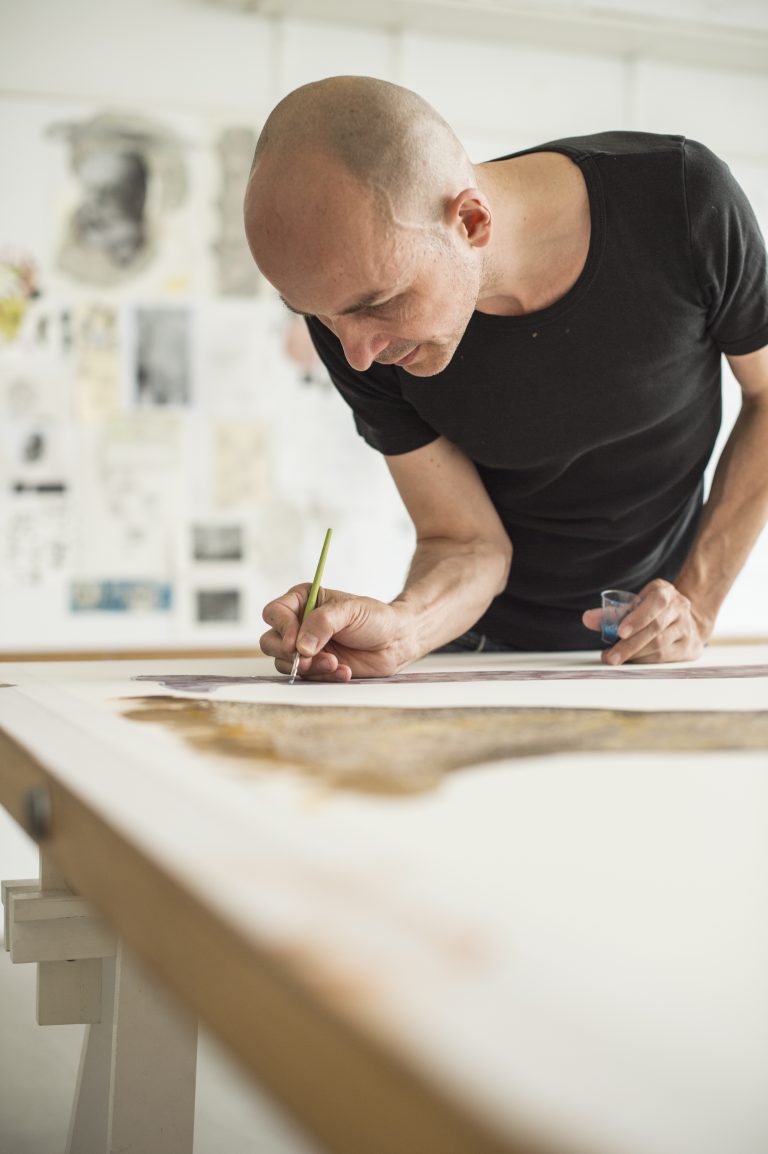 His work has been the subject of numerous solo and group exhibitions in Zürich (2019), Beijing (2019), Singapore (2018), Berlin (2014), Texas (2011) and Miami (2009), among others. His work is featured in the collections of Sammlung der Kulturstiftung Sachsen (Kunstfonds), Sammlung der Deutschen Bundesbank and Museum der Bildenden Künste Leipzig. Dirk Lange currently lives and works in Dresden.