Société is pleased to announce its first exhibition with Tina Braegger, opening 9 September from 10h to 19h.

With the death drive Sigmund Freud introduced one of his most controversial terms into the theory of psychoanalysis. He understood the compulsion to repeat as an expression of the death instinct, in general the subject’s striving for preservation and standstill, as expressed, among other things, in the ritualized actions of the obsessive-compulsive. The death drive originates, to some degree, in a compulsion to repeat. Tina Braegger’s engagement with the dancing bear could be said to be propelled by a Grateful Death Drive. No matter how often she repeats the unofficial logo of the American rock band, the desire to produce yet another iteration is never extinguished. Braegger first began working with the dancing bear after seeing them on a handbill for an event in 2011. It first appeared on the cover of the album History of the Grateful Dead, Vol. 1 (Bear’s Choice), mixed by the band’s sound engineer Owsley «Bear» Stanley who also kept them awash in acid. Dubbed “the King of LSD” by Rolling Stone, Owsley was the primary supplier for Ken Kesey and the Merry Pranksters and his namesake appears as a noun in the Oxford English dictionary to describe a particularly pure form of “California sunshine.” In the parking lots outside of Grateful Dead concerts in the 70s and 80s, where the band’s followers peddled self-made merchandise to fund their nomadic lifestyle, the bear was one of the most popular elements included in bootlegged merch. 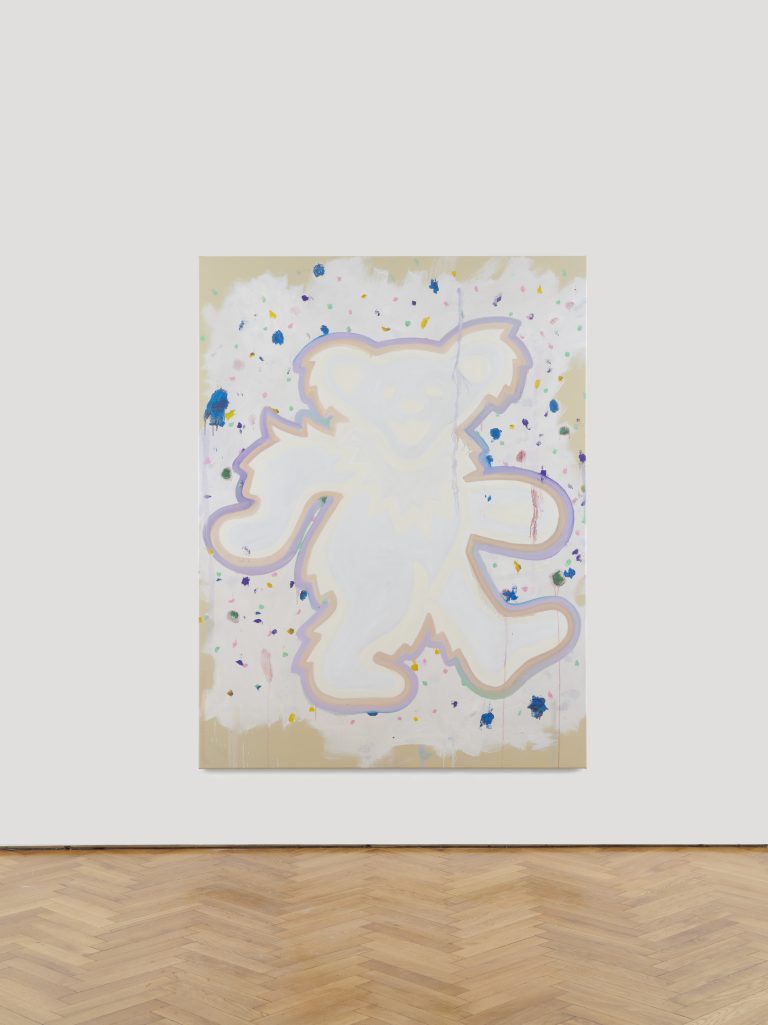 Tina Braegger, He Said It Not Me, 2020. Courtesy the artist and Société. Copyright Société.

For Braegger, its peculiar charm derives from the fact that despite its situatedness in a specific context, it nonetheless has the potential for neutrality. It lacks a gender, a narrative, a voice. In Braegger’s paintings, as in the concert parking lot, the bear operates according to the logic of the bootleg. It absorbs, sponge-like, characteristics that it encounters through the process of its circulation, canonization, and its own fluctuating values—whether the sunshine and daydreams of the deadhead scene or the rampant commercialism of over-hyped sneaker culture (Nike just dropped a pair of limited edition Dancing Bear sneakers which retail at over two thousand euros). The bear’s emptiness indicates the fragility of its link to meaning and representation and, therefore, its complete lack of a moral compass. Never fully engaged in a capitalist system, the bear somehow nonetheless has the potential to represent it.

In the exhibition Ich werde hier sein im Sonnenschein und im Schatten, which borrows its name from a novel by Christian Kracht, the dancing bear undergoes significant shifts in scale and perspective, appearing in fragmented and enlarged form over a number of different canvases, some of which nod to art historical precedents like David Hammons or Elaine Sturtevant. Braegger’s own interest in the dancing bear doesn’t emerge from the robust iconographic universe surrounding the Grateful Dead, but it’s worth noting that within this culture the dancing bear was constantly reappropriated and redesigned—changing appearance, context, and form. There was little, if any, distinction between official and unofficial use. In fact, the bear inverts notions of official and unofficial, original and copy. It circulated as a counterfeit long before it was licensed for authorized merchandise—the grateful dead bear is perhaps the “original copy.” 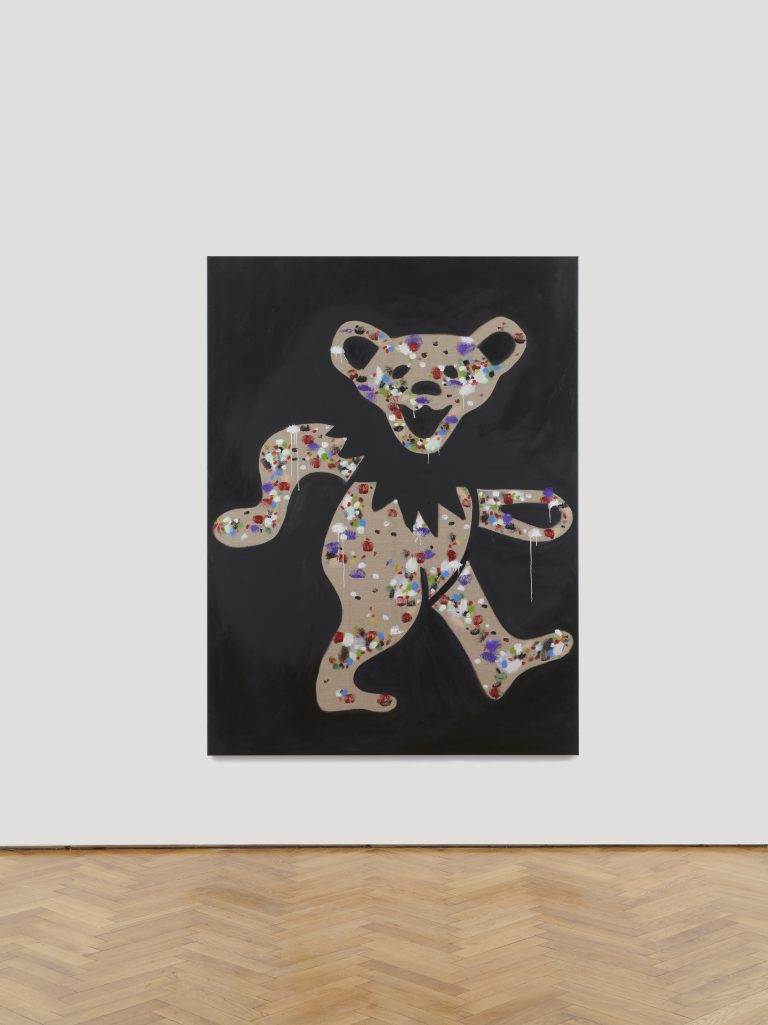 Tina Braegger, It Be Like That, 2020. Courtesy the artist and Société. Copyright Société. 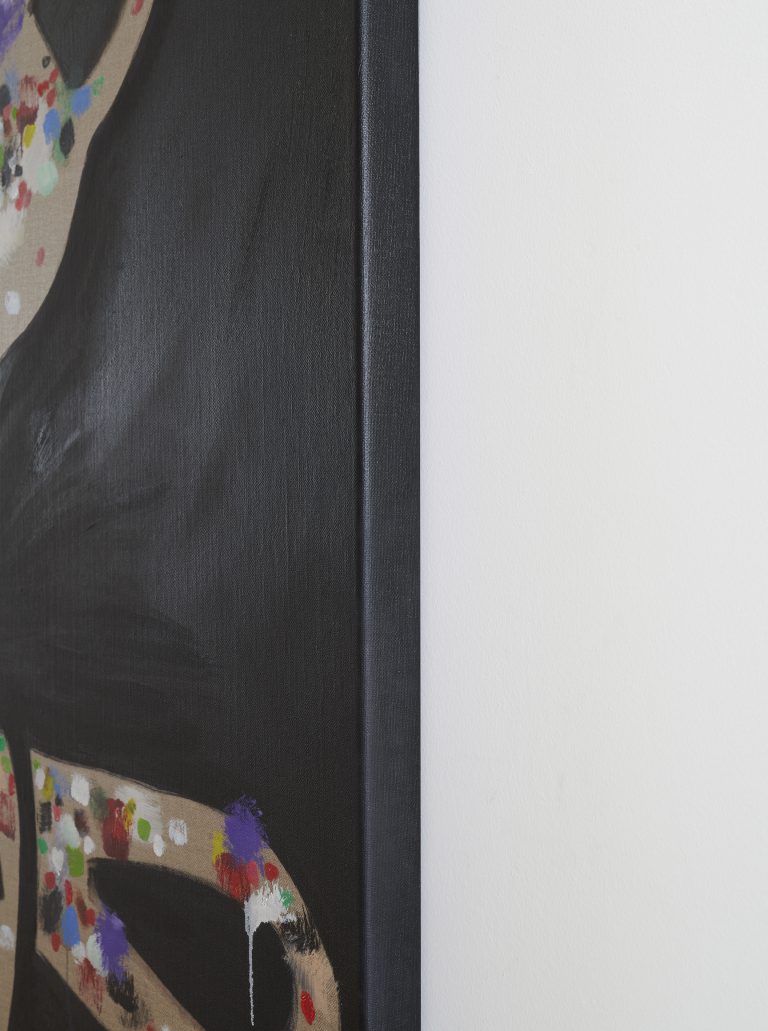 Tina Braegger, It Be Like That, detail, 2020. Courtesy the artist and Société. Copyright Société.