Jeanette Mundt
Wash Us With Fire

Jeanette Mundt
Wash Us With Fire

Société is pleased to present Wash Us With Fire, Jeanette Mundt’s fourth solo exhibition with the gallery. The exhibition includes recent works from a series of paintings begun in 2018 based on photo composites of the 2016 United States Women’s Olympics gymnastics team originally published in the New York Times. Com- pressing a dynamic, durational event into a single, painted, static image, Mundt’s deft brushstrokes bring together divergent movements and temporalities. Yet while earlier works in the series seemed like they were stuttering, collapsing different temporalities into the single space of the picture plane, a number of Mundt’s most recent works, such as Best American (Aly Raisman I) seem to collapse time within the figure, producing hybrid bodies with manifold conglomerations of limbs. Mundt’s replications and reconfigurations of the body emphasize her source material’s techno-fetishistic mode of communicating, while also gesturing towards the violence inherent both in the sport and the nationalism of the Olympic games. The paintings’ red, white, and blue backgrounds mirror this interplay between nationalism and gender with their allusions to Color Field Painting. Unlike the earlier works in the series, which had some sort of anchor, albeit fragmented, in the space of the sports arena in Rio, the gymnasts depicted in Mundt’s most recent paintings inhabit a space of pure abstraction: riffs on Kenneth Noland’s Target Paintings, Barnett Newman’s zips, Helen Frankenthaler’s color fields, or Jasper John’s stripes. These Canonical references to modernist abstraction alternately threaten to subsume and are penetrated by slivers of the gymnasts’ bodies as they catapult themselves across the can- vas. 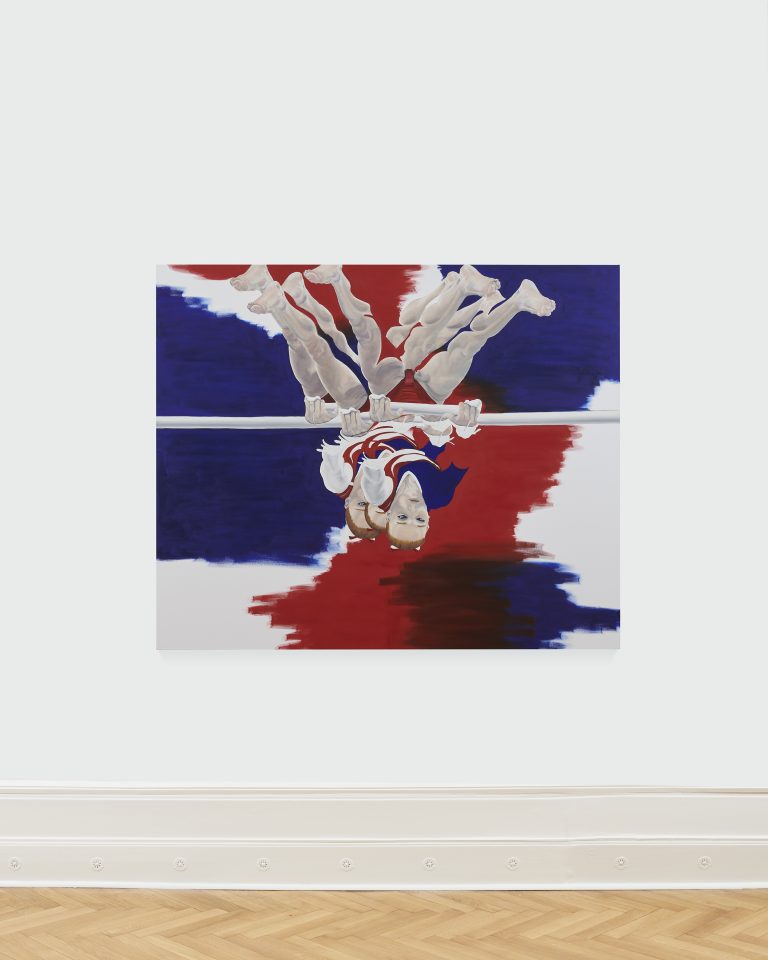 In Wash Us With Fire, Mundt pairs such iconic references with others that are more personal or hermetic in her quest to perpetually reconfigure the image—gesturing towards how our understanding is always in flux and therefore we can’t possibly be consistent in our seeing, in our psychic space. Alongside her gymnast paintings, Mundt presents another recent series that, in contrast to the crisp, bold compositions of Born Athlete American and Best American, depict a darker, more ominous realm. An undefined blaze engulfs the shadowy figures that populate these works, unclear whether they are running towards or away from the flames.