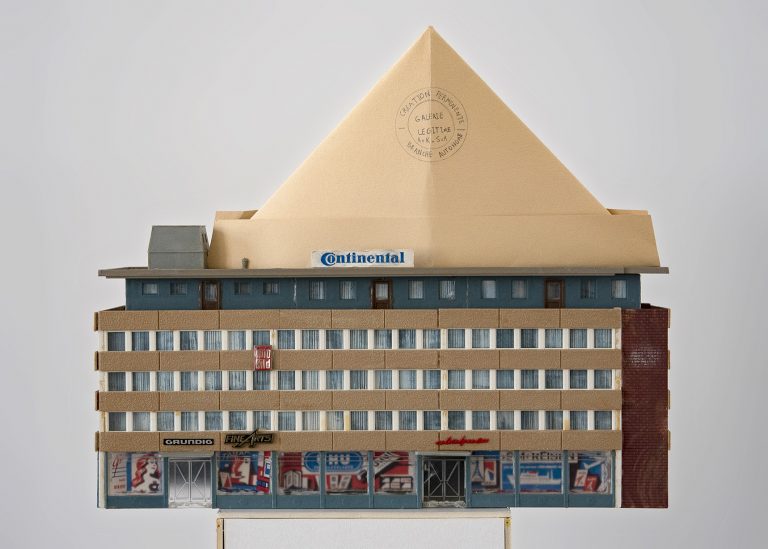 In 2014 and new to Berlin, I was freelancing for a software startup. The job had to do with developing an app that set out to become the default reader for the art world. My main task as the in-house “art expert” was to read a numbing volume of recent exhibition reviews stripped of images, tag the protagonists and locations and rate the writing quality. All the while an algorithm was learning from my behavior in anticipation of fully taking over one day. My other task was to check on my apprentice regularly. Left unsupervised, the app kept filling up with reports of Bill Cosby’s trial, who was earlier tagged as an art collector. Eventually, humans intervened and a filter was set up to shoo away any mention of him.

The majority of the reading material was tepid at best. Occasionally though I’d be moved by descriptions of intelligent, engaging art, leaving the bare backend and searching the full-color article to see the pictures. This is how I first saw Robert Filliou’s La Galerie Légitime [The Legitimate Gallery], a traveling gallery that the artist set up in 1962, in his hat. His own inaugural solo show was followed by miniature solo and group exhibitions with Benjamin Patterson, Daniel Spoerri, and other Fluxus fellows. The gallery traveled to various cities and opened up branches. Thrilled by this encounter, I made a copy of the hat and wore it to a Halloween party. No one could guess who I was trying to be.

Since the startup days, now long past, I live on the last floor of a Kreuzberg building. After a hot Summer of tenant activism and the subsequent disenchantment, the block became a full-on construction site, two years and counting. The new owner, an investment company specialized in privatizing and flipping condominiums, is renovating the building inside and out and emptying it of tenants by way of tact or distress. On the rooftop a new floor is getting built. Living under a construction site has led me to probe into the legal and financial framework for roof extensions.

We are told time and again that the city needs more housing. In comparison with new construction, roof extensions are minor. However, in the case of streamlined investment penthouses, they complicate the existing housing stock below. The new floor mounts the building, receiving support in form of an attractive address, height, plumbing, etc., without the costs and complications of building from the ground up. In exchange for what it takes from under and the airspace it makes unavailable above, this floor isn’t obliged to give back to the world below as it promises to. It is in effect a detached territory laid on top. In the example of our building, fourteen new units for sale are in construction while nearly forty out of 136 existing apartments are renovated, empty, and unsold. 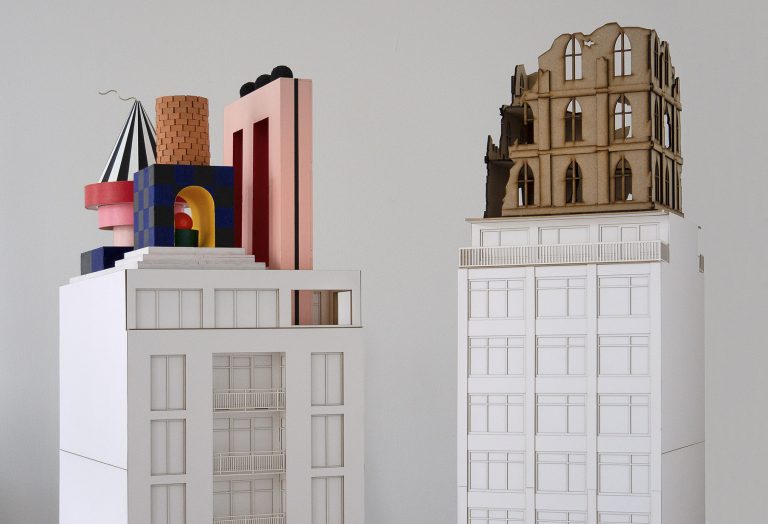 Translating this top-bottom relationship into sculptural language, I am making plinths in the shape of white scale building models and inviting several Berlin-based artists to put a “hat” on the building-plinth. Artists Andrea Canepa, Angela Bulloch, Camilla Steinum, Ellinor Aurora Aasgaard, Marina Pinsky, and Saâdane Afif are making made-to-measure sculptures for each unique plinth. There are few to no guidelines for making these artworks and only one rule: stay clear of solutions. The problem-solving mindset is at least partly responsible for mistaking roof extensions for a means to more housing.

I don’t remember the moment I decided to make a work about roof extensions but I’m certain it involved Filliou’s hat. Perhaps I was drawn to Filliou’s work because its diminutive temperament poked fun at the value-generating locations—the gallery, the top floor, the plinth, the artist’s head. Perhaps also because his gallery was a support structure or a container for the work of other artists. Both these tendencies, if sometimes unwittingly, manifest in one form or another in my work. The hat showed me a way of converging these two tangents.

As for the app; no one ever heard of it. The client, a bank, withdrew funds shortly after its launch. The company I worked for has meanwhile shifted focus entirely to AI in pharma. My former apprentice was sold to another art app. In fact, it’s probably reading this now, turning Cosby away.

Shirin Sabahi is a Berlin-based artist. Her projects often involve stories and remnants of artifacts and places and include films and their by-products. Currently taking part in BPA// Berlin program for artists, her work will be exhibited in 2021 in group exhibitions at KW Berlin, Kunstmuseum Wolfsburg, Europalia Arts Festival in Brussels, and Stravanger Kunstmuseum.