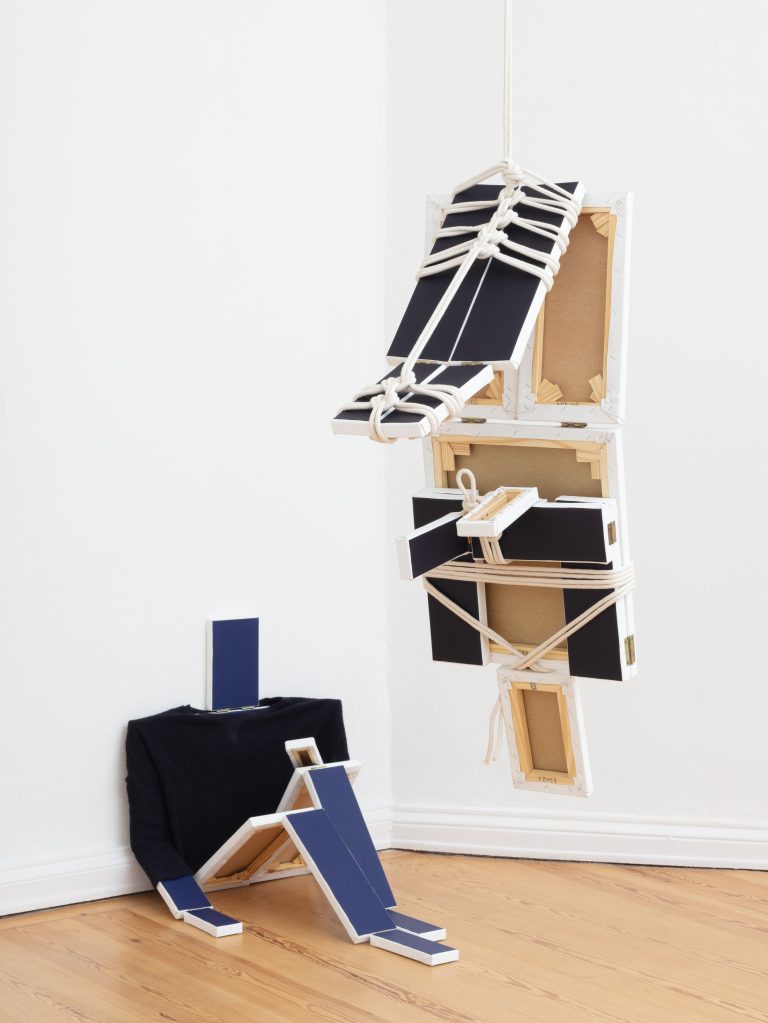 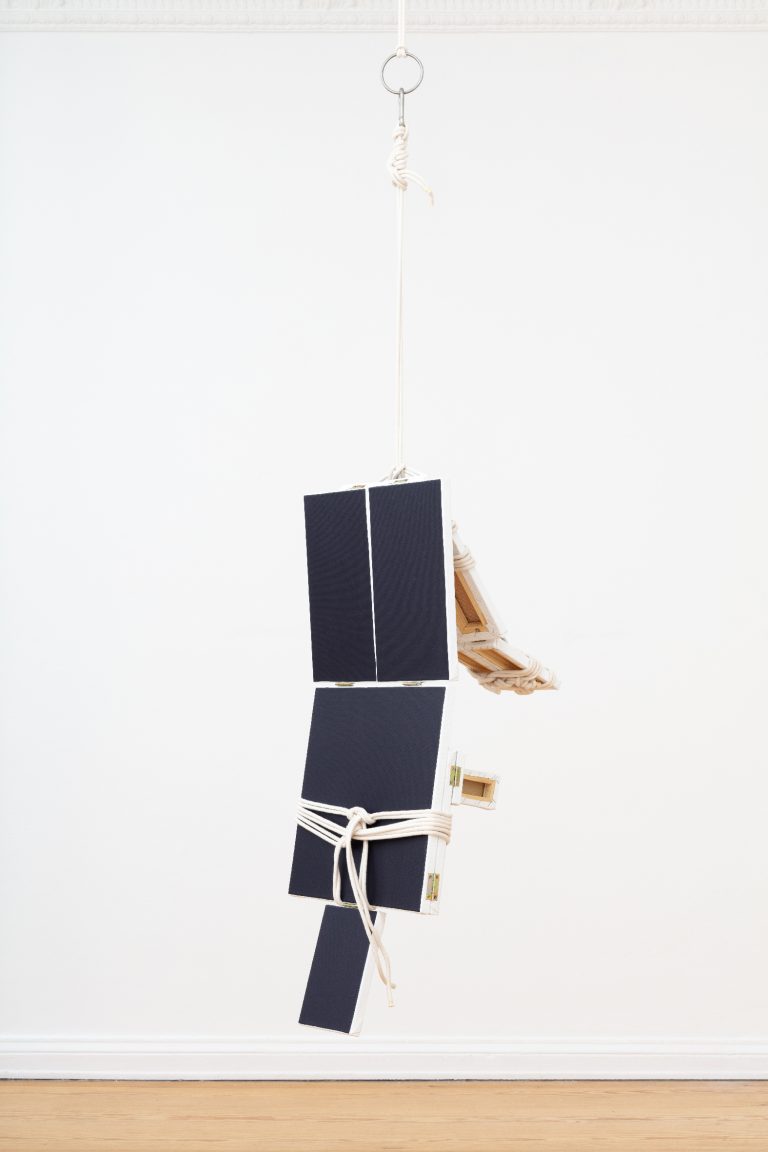 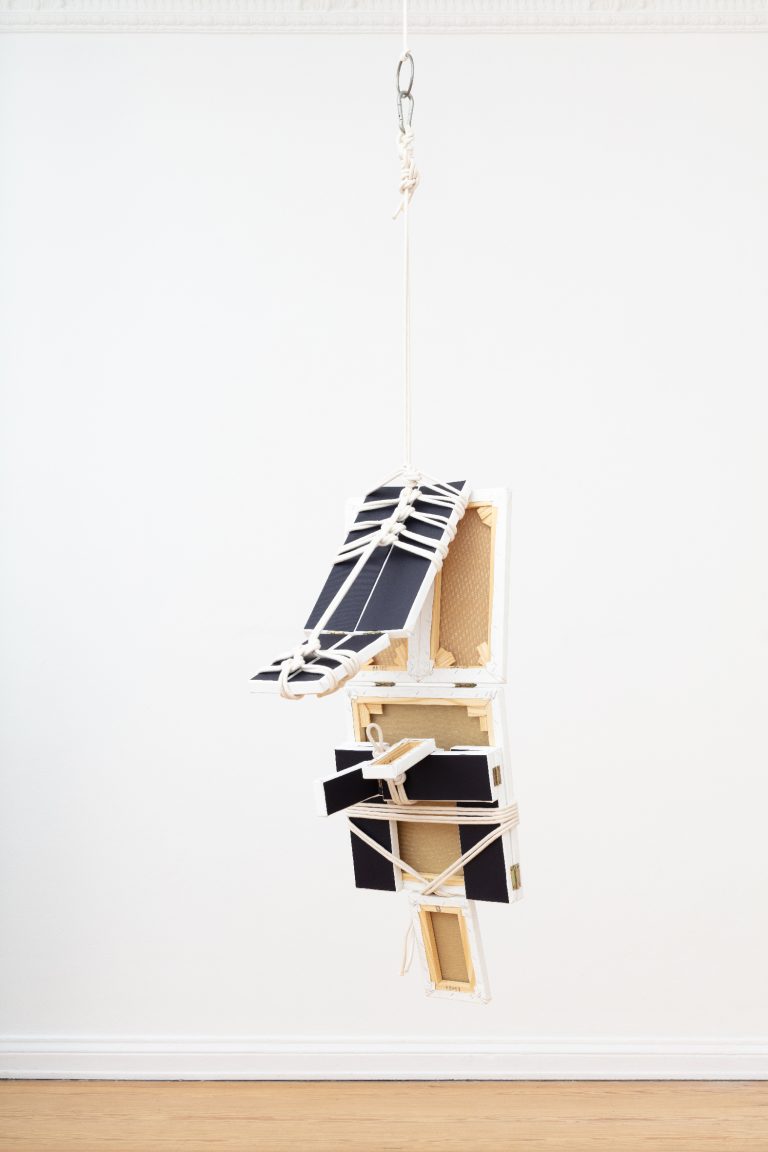 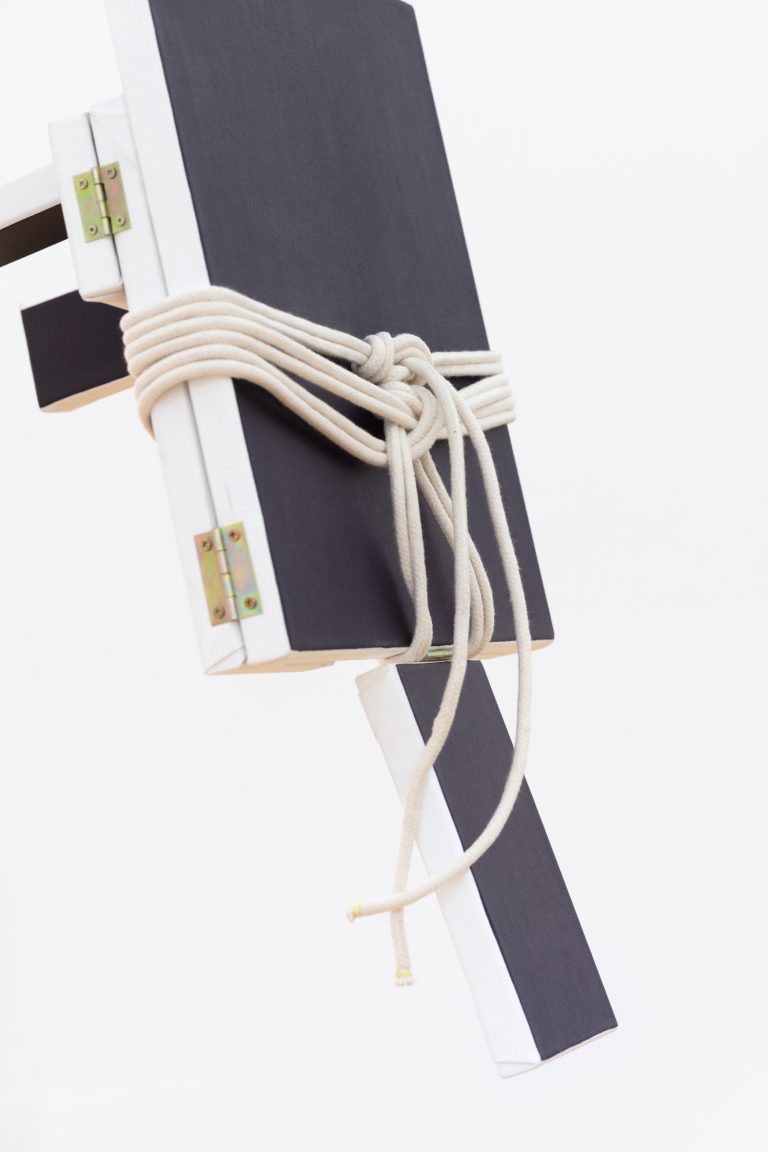 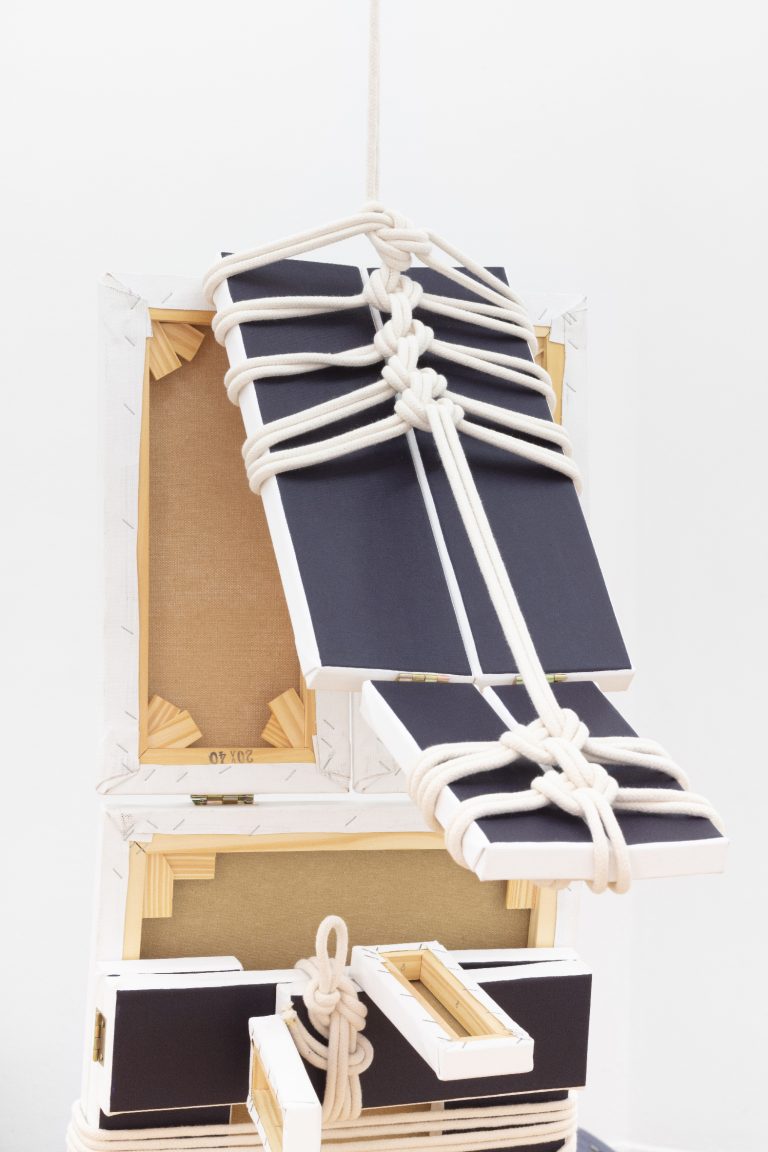 Mariela Scafati is not utterly unknown in Berlin after letting 65 monochrome canvas bodies besiege an exhibition space at the KW within the 11. Berlin Biennale in 2020. Presented by PSM, the Argentinian artist’s first gallery exhibition in Europe includes an installation taking up the two exhibition rooms and new figurative objects. They are made of monochrome canvases, tied with each other by ropes and suspended with pulleys in space up to the ceiling. 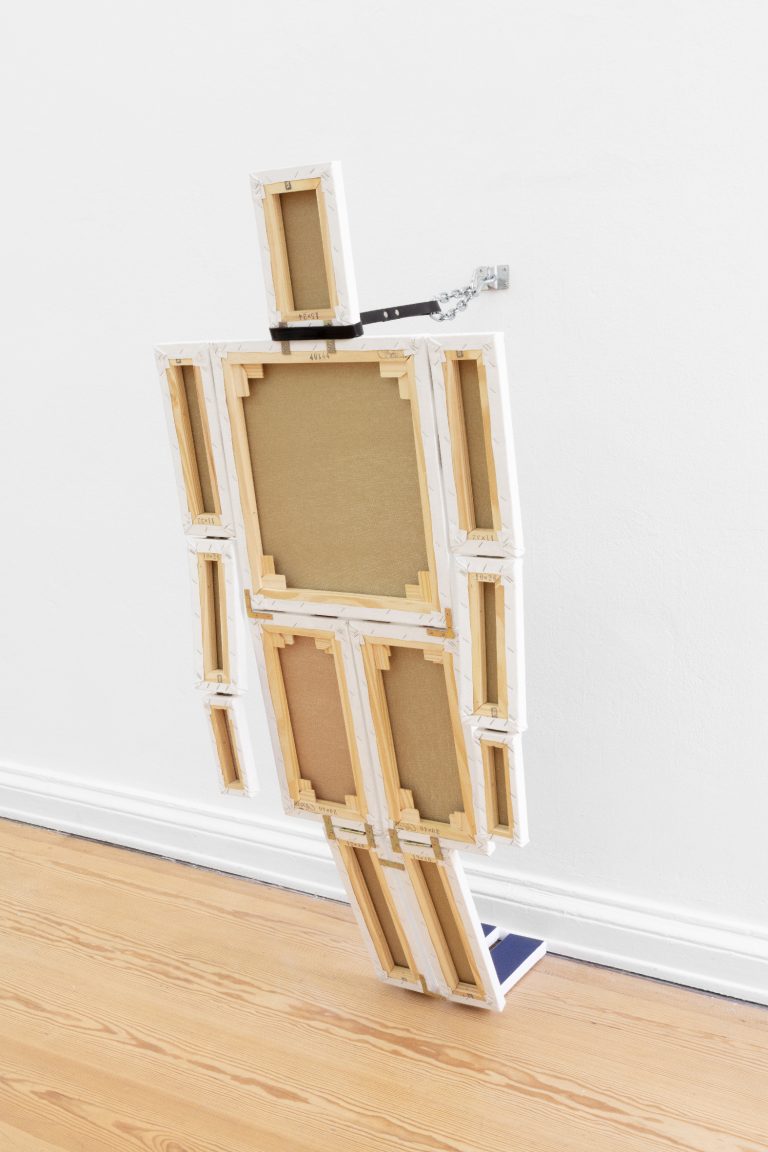 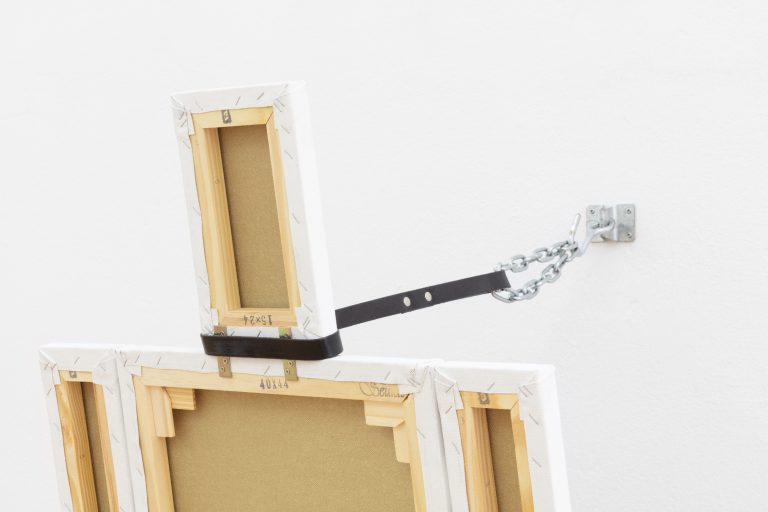 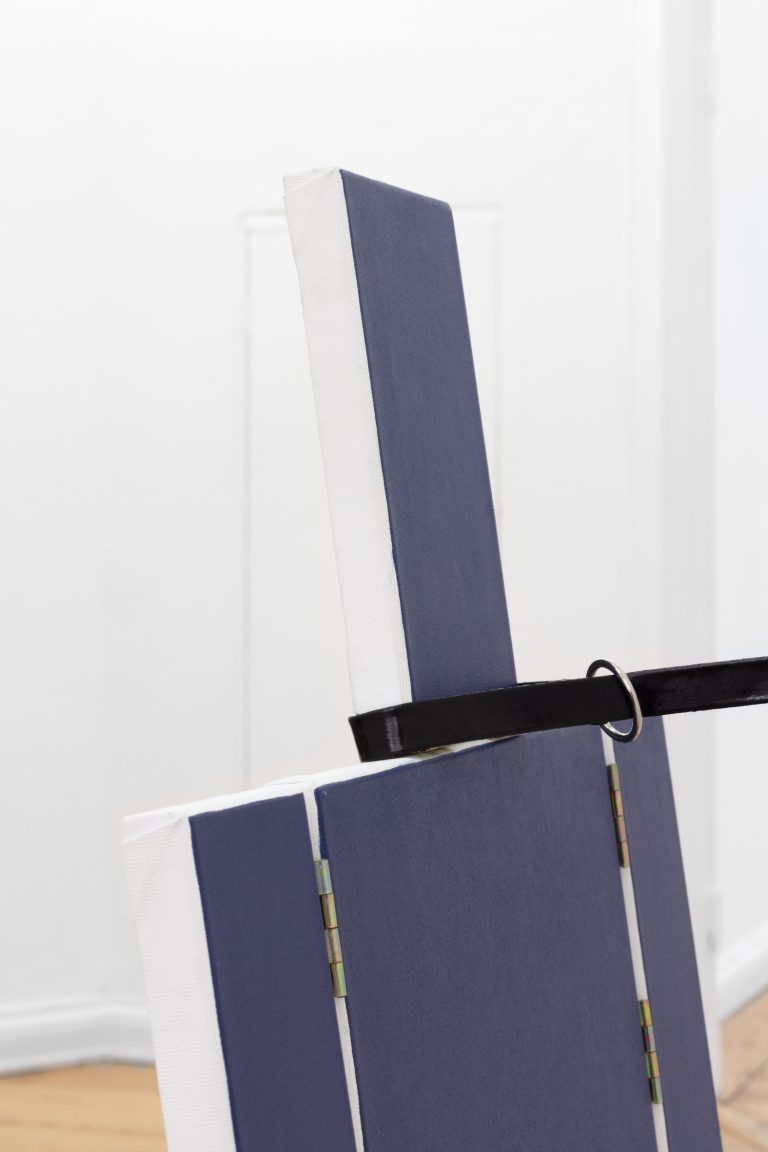 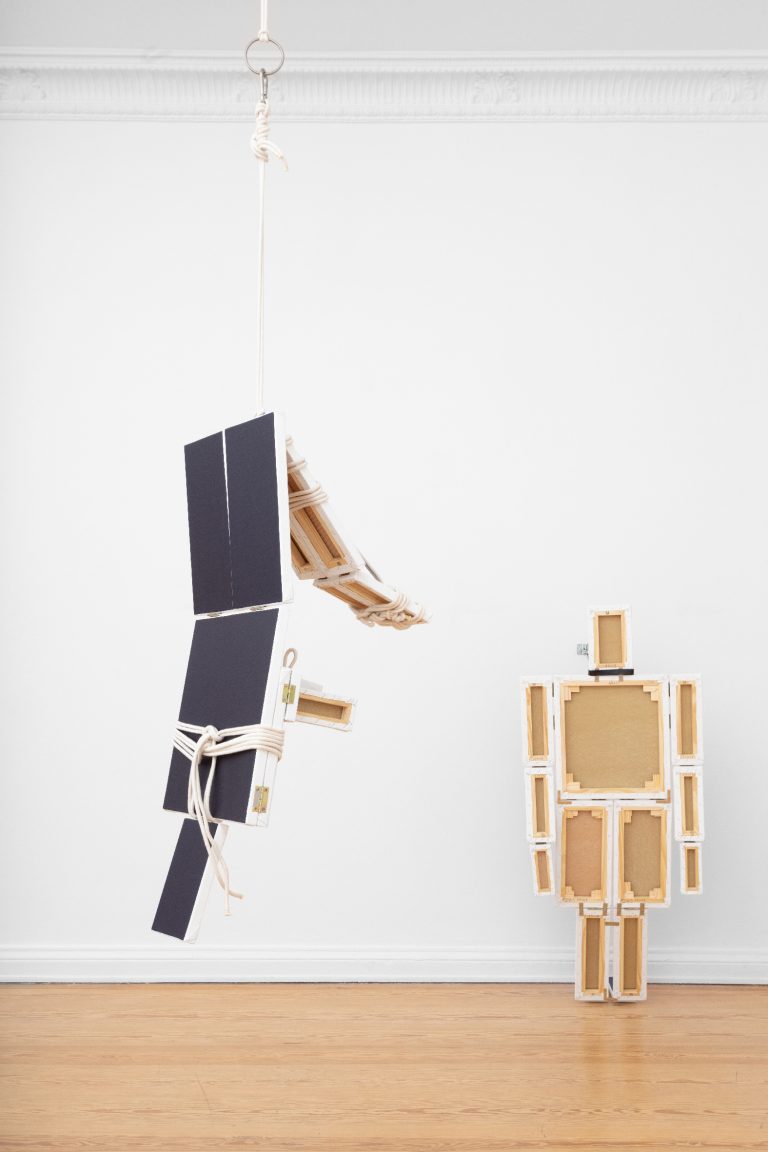 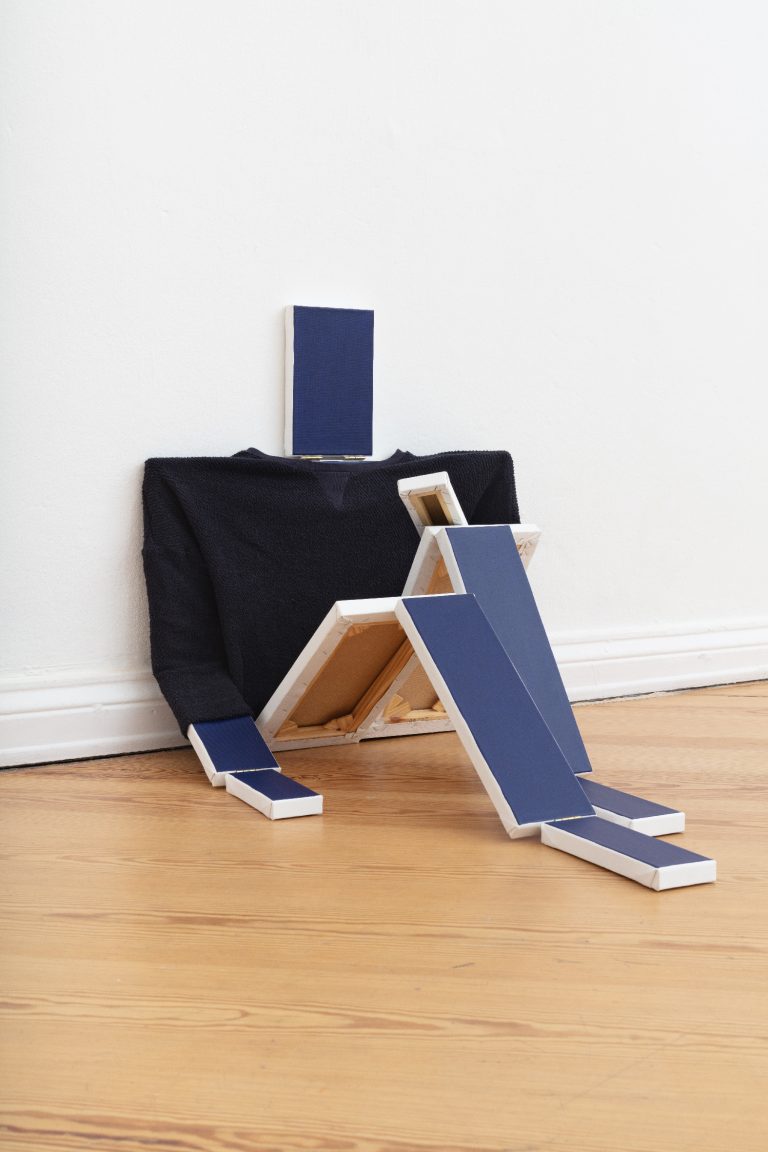 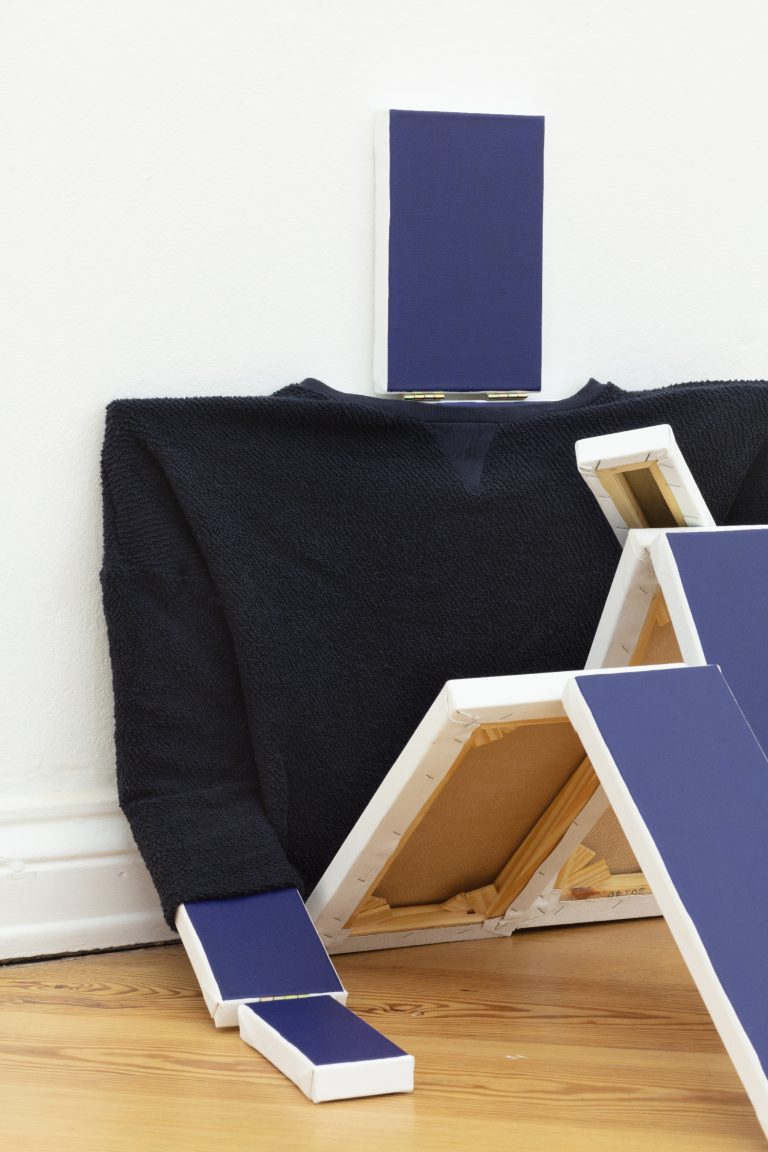 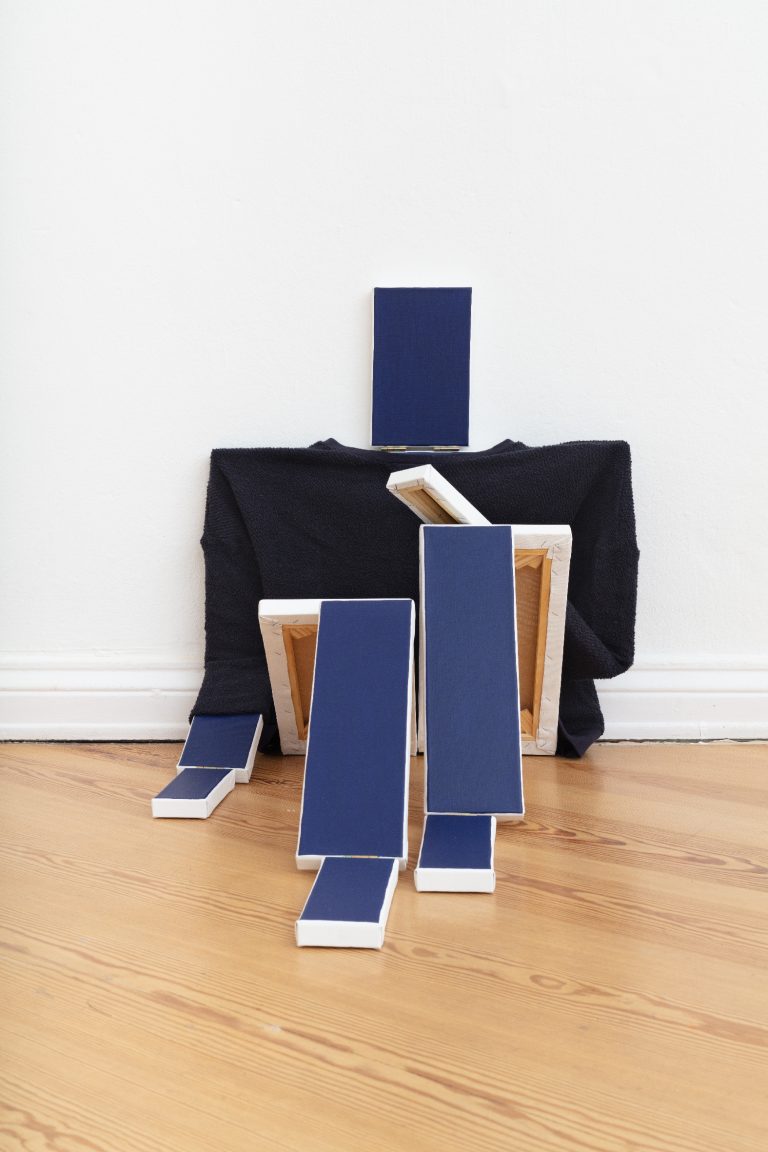 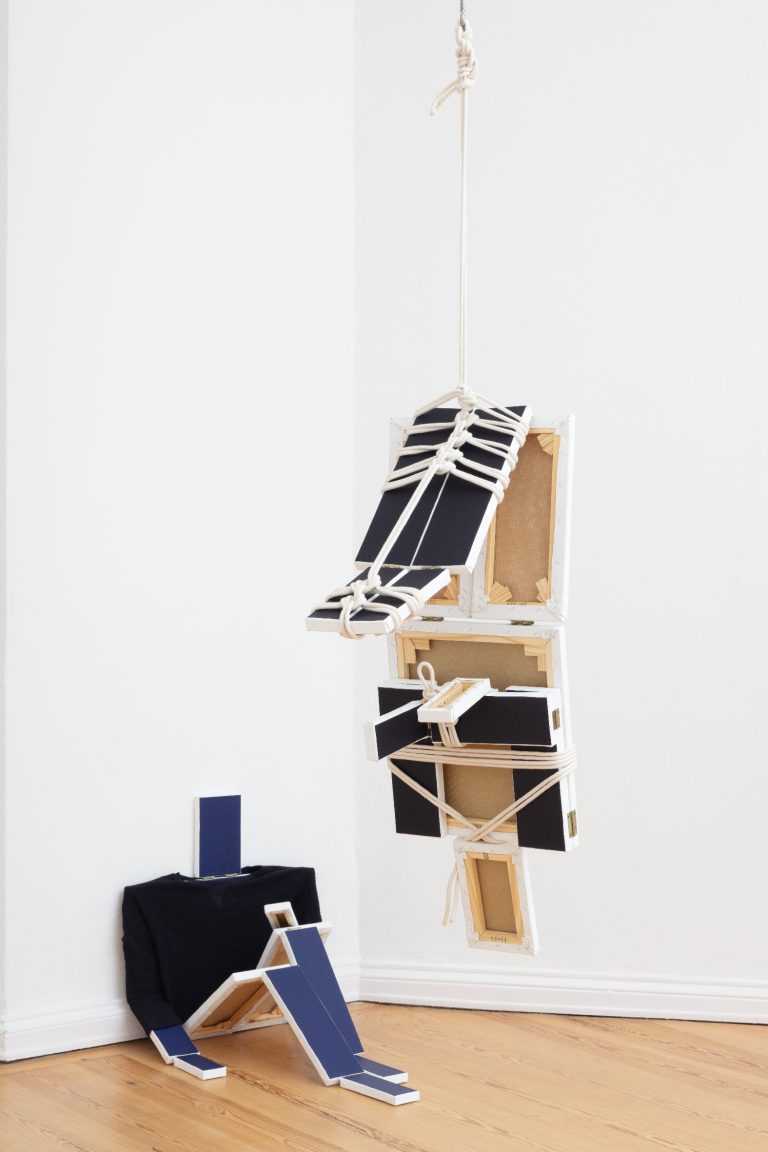 Despite the sculptural and spatial formats of her works from the past years Mariela Scafati herself still speaks of painting and indeed, one always deals with actual canvases and paint. Furthermore, Scafati forgoes as much as possible the use of technical applications and tools such as screen printing, tapes or painter’s rollers. Instead, she creates her monochrome paintings with brushes only, painting the surface in several layers.

For Mariela Scafati painting serves as a medium of memory and of processing personal experiences, especially those made in social contexts. Indeed, her artistic practice has been essentially informed by the frequent political activities in the streets of Buenos Aires since the early 2000s that Mariela Scafati engaged in within activist collectives of the LGBTQI+ community. 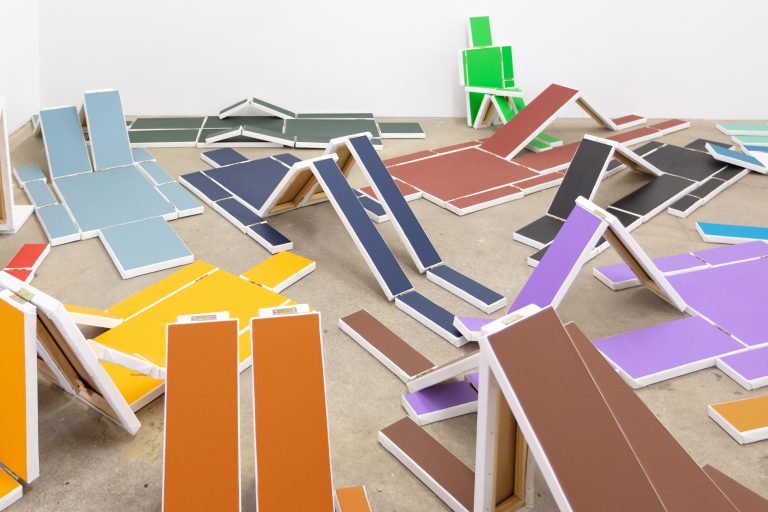 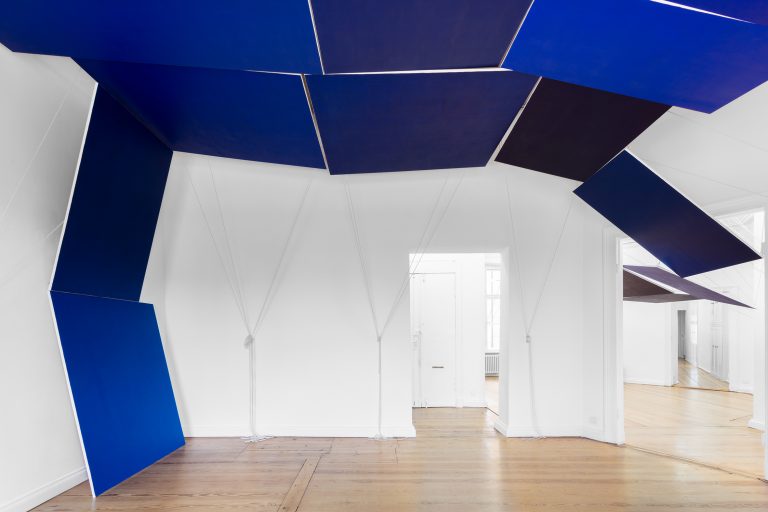 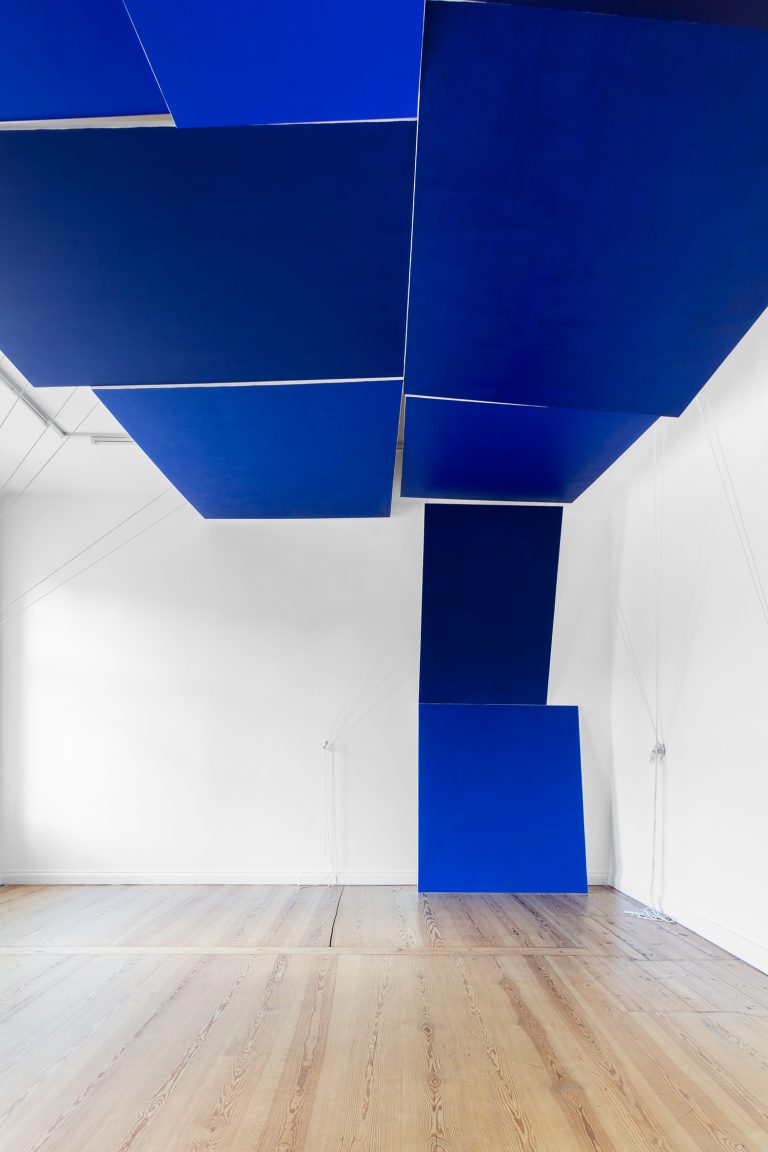 I mounted each painting according to feel, closeness, glimmer, and how its edges related to the others.

The space features suspended paintings in contact with one another and more or less near to us.

I try to lift myself.

Even when tied up and lifted I keep on wondering: Is it possible to stop thinking that when I paint I am painting a canvas on a frame, that its motion is the tension between the two?

Are they two? Does a painting feel like a body when it looks like one? How long can a painting sustain this state? Under what circumstances do we find ourselves dressing someone? Who does the painting look like? Our smell, who is that?

Does the color as reflected by another color nearby get me closer to a painting? How much movement generates non-movement? I watch it as it moves away and gets closer.

I look around the inverted cerulian landscape.

I wonder why I am calling them all blue as if there were only one true blue that could give them a place. Perhaps that place is the painting, which despite being outside of itself, insists on existing. 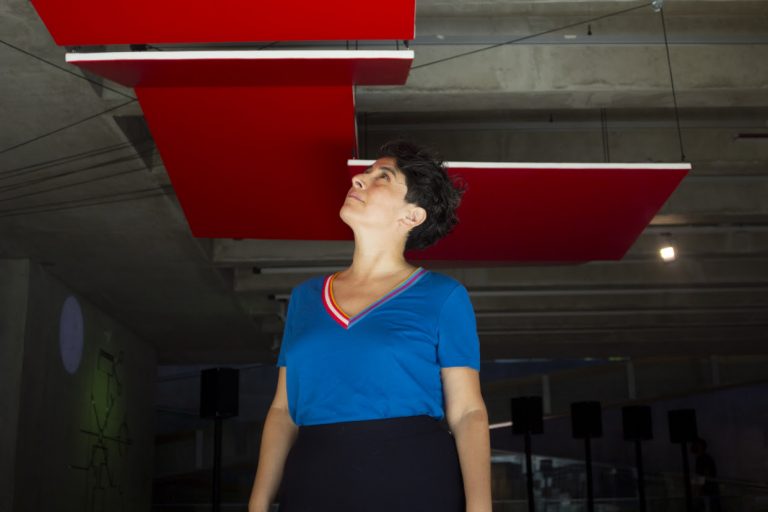 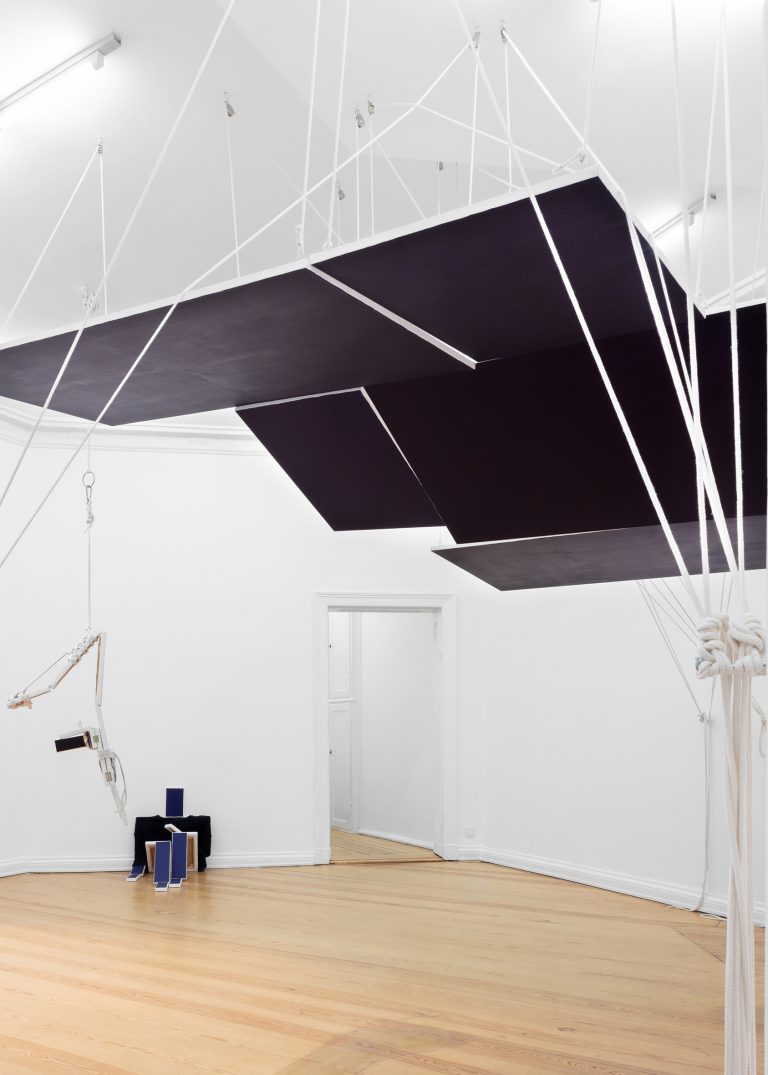 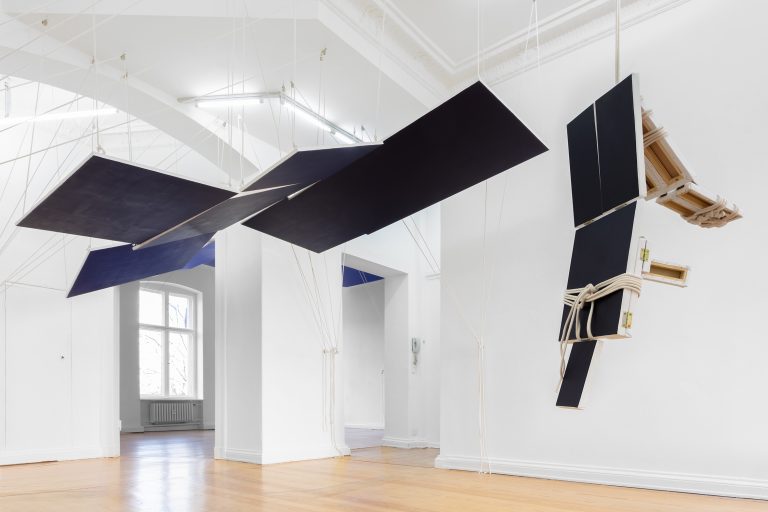