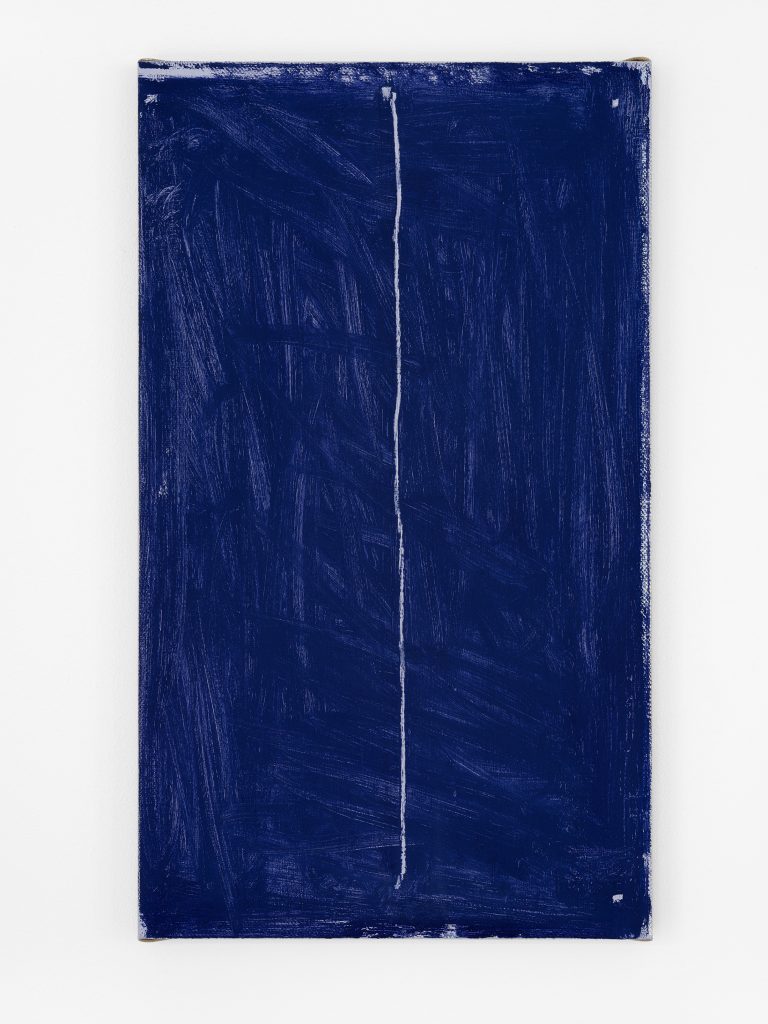 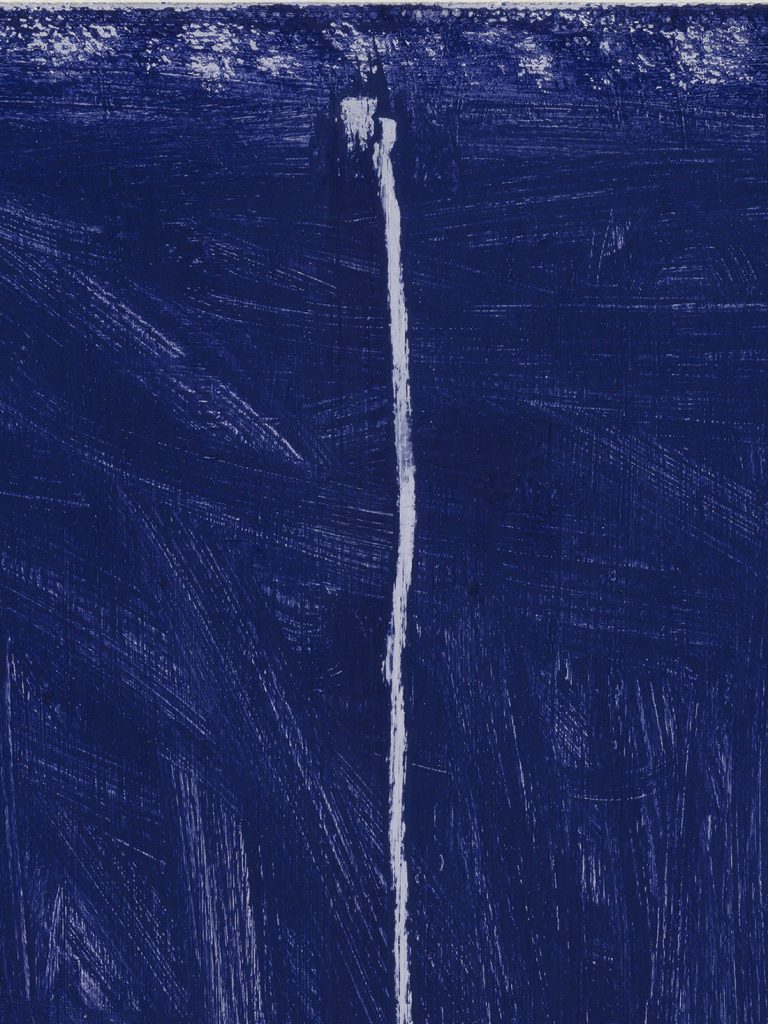 Lighting one candle
With another candle—
Spring evening.

In his fifth solo show at Galerie Nordenhake, John Zurier presents new paintings shaped by an intense engagement with traditional Chinese and Japanese painting and poetry over the past two years. The inclusion of nature and perceptions of nature plays a key role in these classical genres. The way in which the seasons, for example, are linked to certain moods and their depiction can generate feelings similar to those experienced in nature itself.

The concept of “Level Distance” (pingyuan in Chinese) is one of three compositional principles that became established in Chinese painting during the eleventh century to generate atmosphere and distance. Over centuries, this principle was repeated, refined, and reinvented. In a painting with “level distance,” the gaze gradually wanders to a far-off point in the image. The way in which this takes place, in an either unobstructed or interrupted manner, could be an allusion to painting itself, to levels of abstraction, to the personality of the painter, or represent an implicit commentary on the political situation at the time of the painting’s creation. As the artist himself puts it, “The title is meant to suggest breadth, balance, stillness, and expansion, qualities that are important to my painting.” 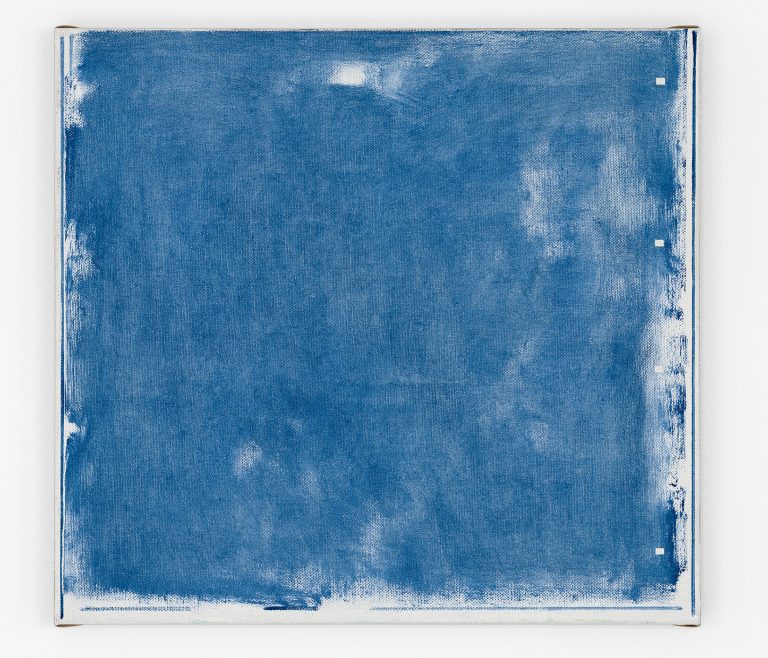 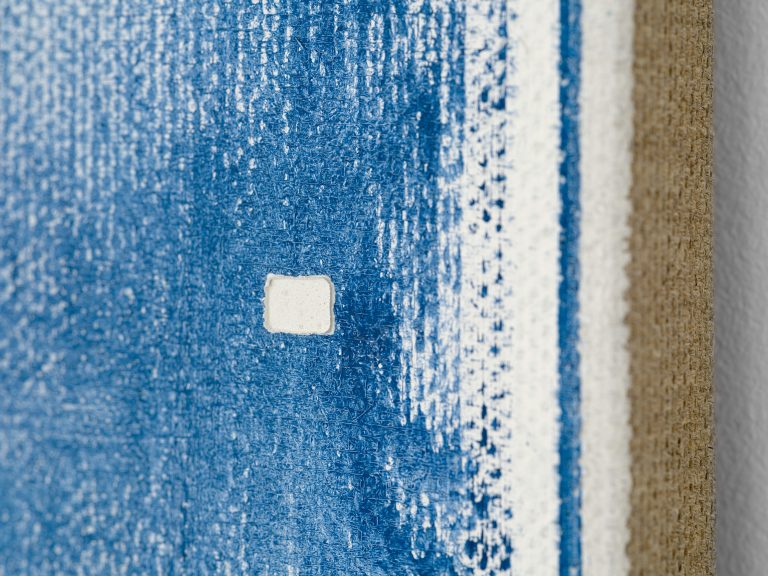 For if at first glance the transcendental aura of Zurier’s paintings seems to hint at worlds beyond our own, his completely tangible way with paint application—right down to the anomalies in the weave of the canvas, the variable degrees to which oil pigments embed themselves or skip over the warp and weft, and the undergirding grid that they combine to make — incessantly brings us back to the emphatic “here-and-nowness” of what we are looking at, even when, as with the grid canvas threads, it disappears under one or more layers of oil pigments. […] I have mentioned washed and scumbled paint, and perhaps this is a good time to list a few of the many other ways that Zurier’s tones and tints go down: rubbing in, scraping back, allowing the brush to skip when it meets a “road bump,” making sure that it glides over lumps and knots in the taut fabric.

Like Chinese landscape painting, Zurier’s works powerfully communicated an atmosphere that recalls natural phenomena, the memory of a certain light or color quality in a particular location at a certain moment, frequently linked to literary figures and poetry. The title of Track (Spring Evening) (2022) is taken from an eighteenth-century haiku by the Japanese painter and poet Yosa Buson.

The paintings play with depth and surface, the ephemeral and the concrete, the signified and the signifier. For example, in the tempera and oil-based painting The Waves (2000), the layers of paint were scraped away with a sharp knife to the raw canvas beneath. This work was created at his studio in Iceland during the late summer with a view of the mountains, fields, and the sea and with Virginia Woolf’s eponymous text in mind, where she reveals that the only constant is flow and change. 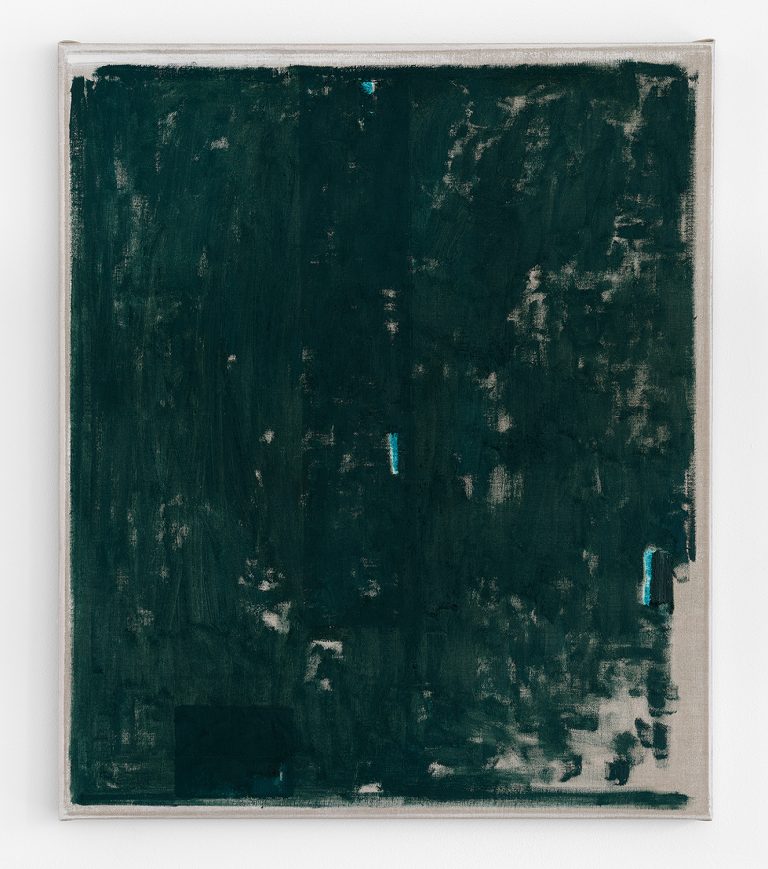 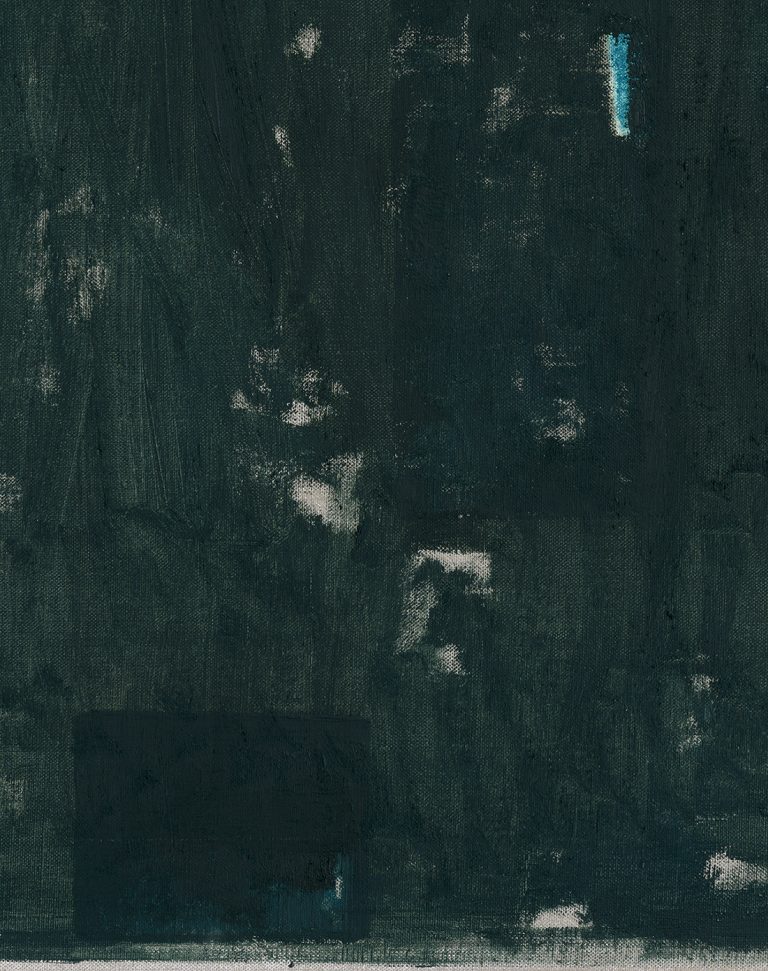 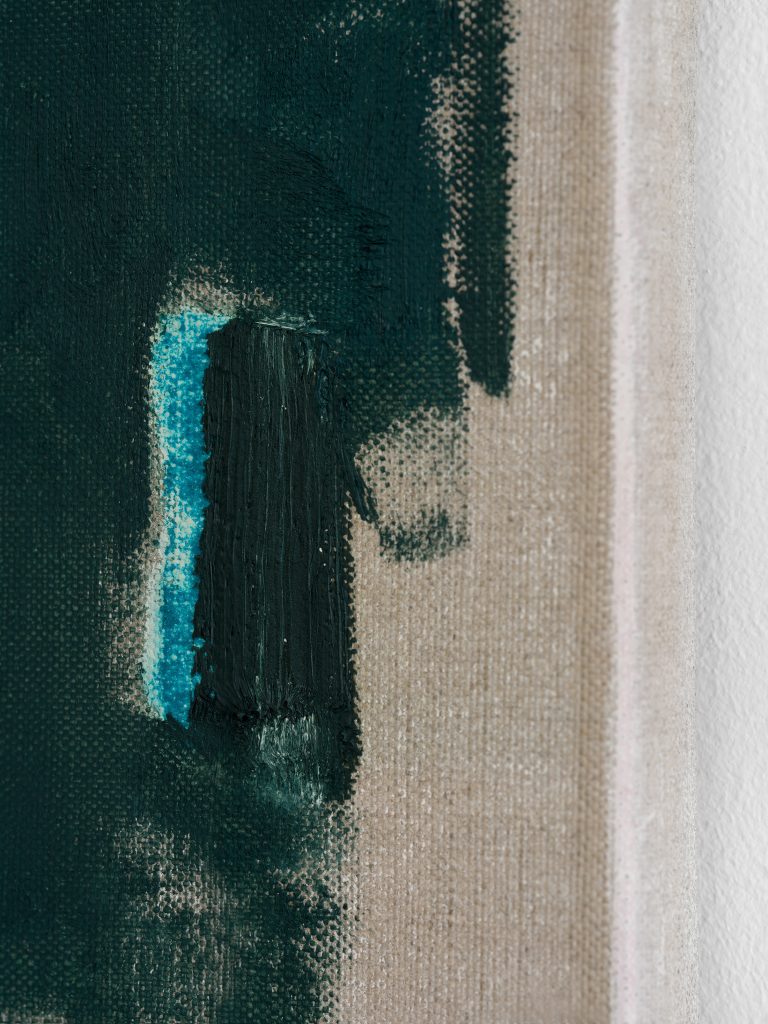 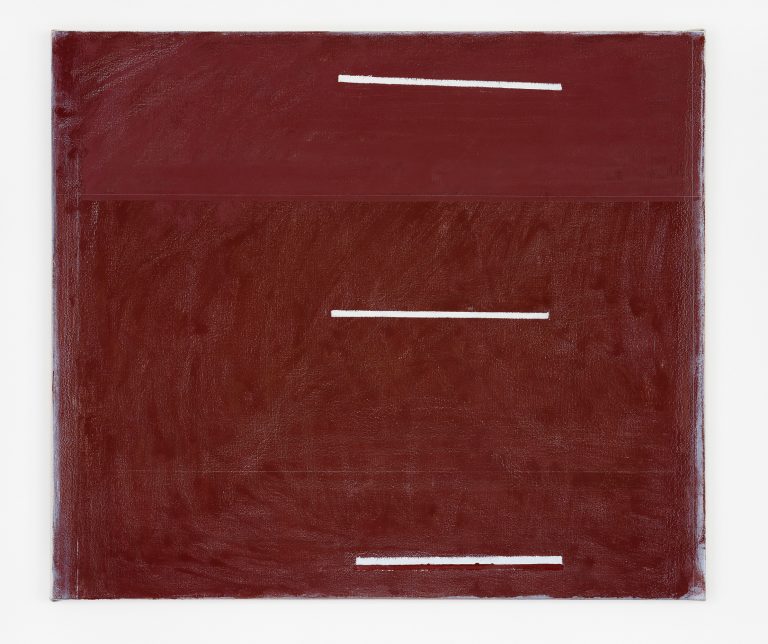 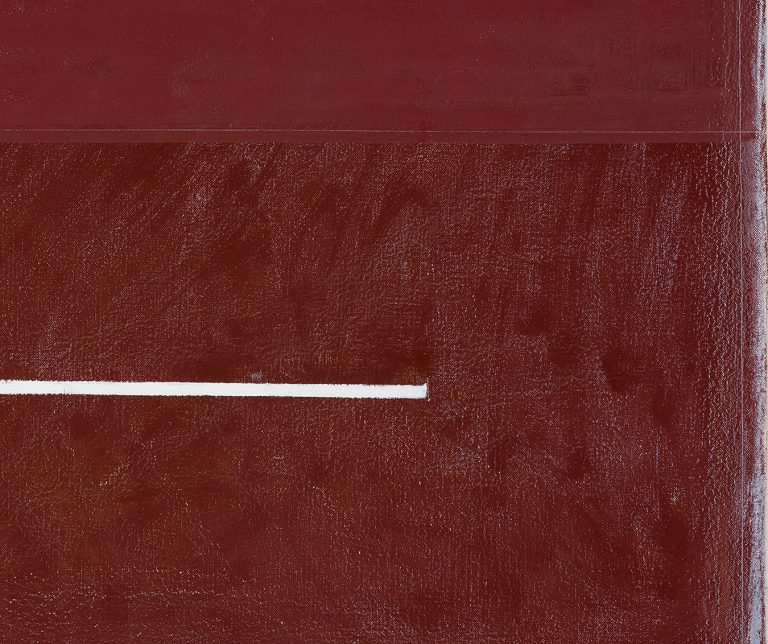 Several paintings in the exhibition are covered with luminous washes in subtle colors and shades that lend them an ethereal atmosphere. Others show a powerful brush stroke in intense, broken fields of pigment or vertical and horizontal lines that support one another, apparently divorced from the surface and thus alluding to a spatiality. In their directness and immediacy, the works usually seem to have been executed rather intuitively and quickly, but they actually emerge “in a balance of deliberation and spontaneity,” making time another element of the composition. The physical painting itself, its objecthood, and even more its content, is reduced to its essence, over days, sometimes years. Comparable to poetry, John Zurier’s painting is abstract, condensed sensation.

Mr. Zurier’s paintings are acts of full disclosure; you see every decision, gesture and mark that went into their making. This is true of many foundational postwar painters, especially Jackson Pollock and Robert Ryman. But Mr. Zurier’s process is more intuitive and personal. No detail of a painting determines any other; you absorb each, oddity by oddity, fitting them into the whole, and into the experience of really looking. 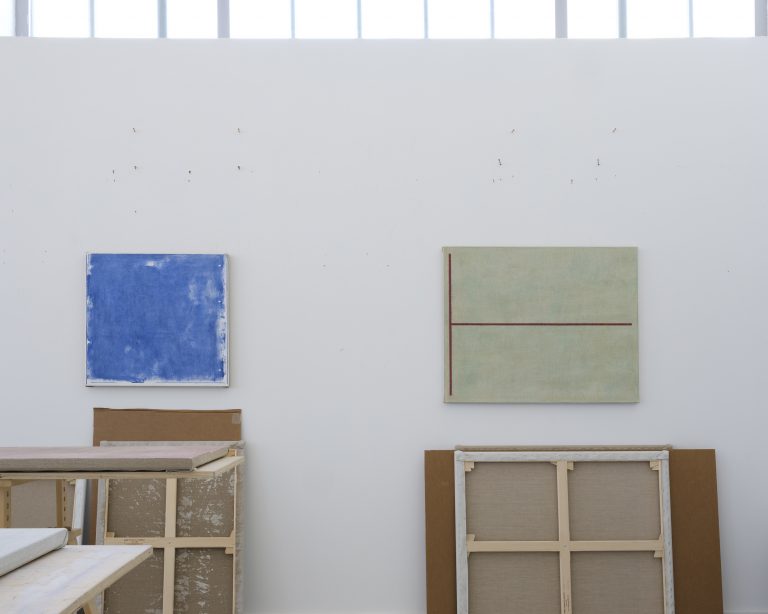 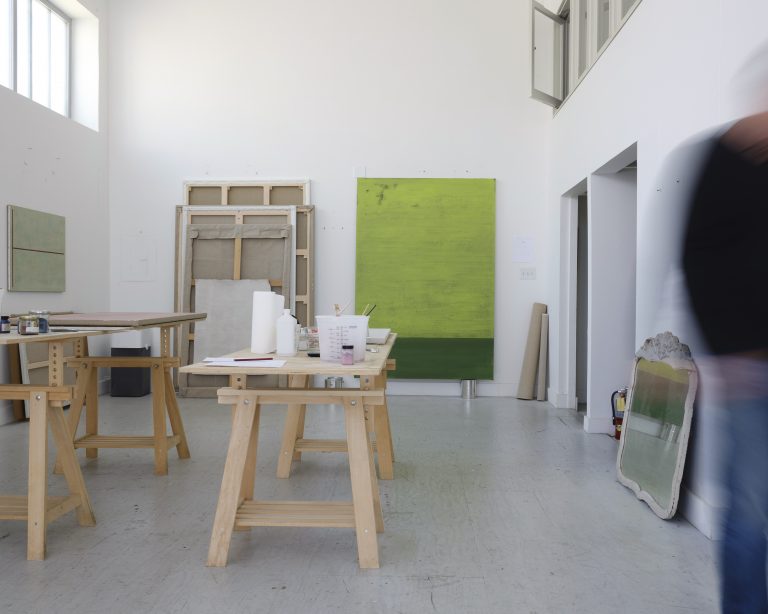 John Zurier was born in Santa Monica, California in 1956 and lives in Berkeley and Reykjavik. He recently participated in the exhibition The Artist’s Eye: Tammy Rae Carland, David Huffman, Lava Thomas, John Zurier at UC Berkeley Art Museum and Pacific Film (2022). A solo show of recent paintings Far Again was presented at Moderna Museet Malmö in 2021. Select museum exhibitions include shows at UC Berkeley Art Museum and Pacific Film Archive (2018 and 2014), the San Francisco Museum of Modern Art (2017); the New Mexico Museum of Art, Santa Fe (2016), and the Colby Museum of Art in Waterville, Maine (2015). His work has also been presented at the São Paulo Biennale (2012), the California Biennial, Orange County Museum of Art, California (2010), the Seventh Gwangju Biennale (2008), Kettle’s Yard, Cambridge (2003); and the Whitney Biennale, New York (2002). In 2010, he was awarded the renowned John Simon Guggenheim Fellowship. His works can be found in numerous public collections, including UC Berkeley Art Museum and Pacific Film Archive, Moderna Museet, Stockholm, San Francisco Museum of Modern Art, the Fine Arts Museums of San Francisco, Museum of Fine Arts Houston. A catalogue with an overview of his oeuvre from 1981 to 2014 and an essay by Robert Storr was published in 2015.