Tomás Saraceno
we do not all breathe the same air

Tomás Saraceno
we do not all breathe the same air

neugerriemschneider is pleased to present Tomás Saraceno’s first exhibition at the gallery: We do not all breathe the same air. Composed of works in diverse media, the exhibition surveys the artist’s social, scientific and philosophical enquiries into breath, spirit and regeneration. Looking at cosmic forces, inanimate particles and living beings, Saraceno’s exhibition portrays environmental concerns while celebrating the complexity of existence and looking for ways to live together differently. The exhibition is powered by renewable energy and neugerriemschneider’s opening hours shift with daylight, reducing the amount of electricity required to power the exhibition, from 11 am – 6 pm through September to 10 am – 5 pm through October. 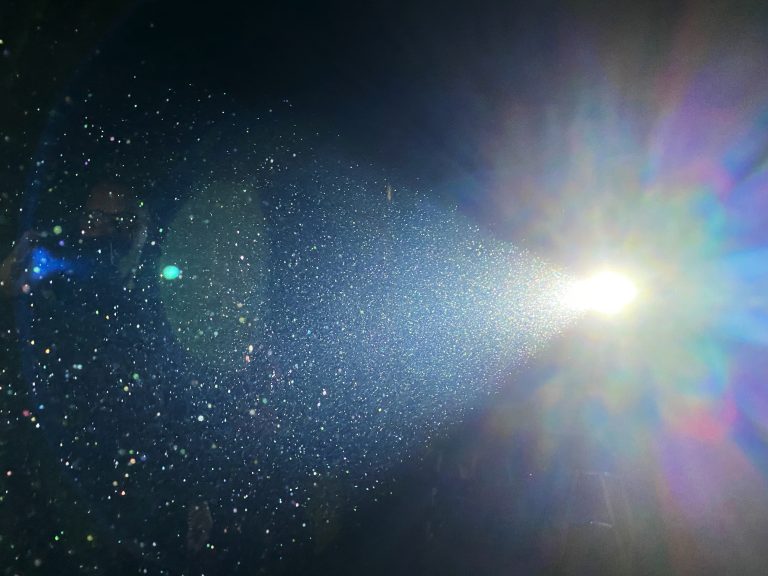 We enter the exhibition from the gallery’s usual exit, a symbolic gesture by the artist to suggest that ‘point-of-no- return’ discourses about our fragile world can be overcome. The first artwork we encounter, from which the exhibition earns its title, is We do not all breathe the same air (2018-ongoing). This ongoing project, carried out so far at numerous cities around the world, visualizes air quality. A spectrum of moons in varying hues represents samples of the air, their color coming from otherwise invisible particles, with darker moons approximating a worsening air quality. For Saraceno, this project has gained ever more importance over the course of the pandemic, where low air quality has intersected with political and social injustices to make the air we breathe ever more unequal.

The hidden particles of our atmosphere are brought to life and into the present moment as we move deeper into the room. Here, darkness is pierced by a single beam of light for Saraceno’s new installation Particular Matter(s) (2021). Within that beam, dust motes – almost invisible or at least ignored in the everyday – are illuminated like millions of suspended galaxies and are stirred by visitors’ movements and breath. Bringing together the tiny particles of daily life with distant dust of the greater cosmos is Printed Matter(s) (2018), a series of photo giclée prints using ink made of black carbon particles extracted from the air in Mumbai. These prints depict images of cosmic dust, sourced from a special issue of the NASA Cosmic Dust Catalog, April 1982. Combining the celestial and terrestrial, this series brings together vast spans of time and scale, from the depths of space to our current world. 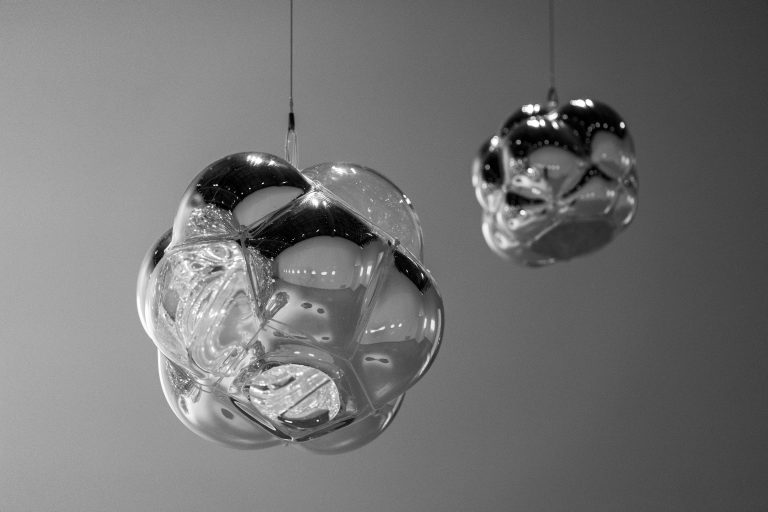 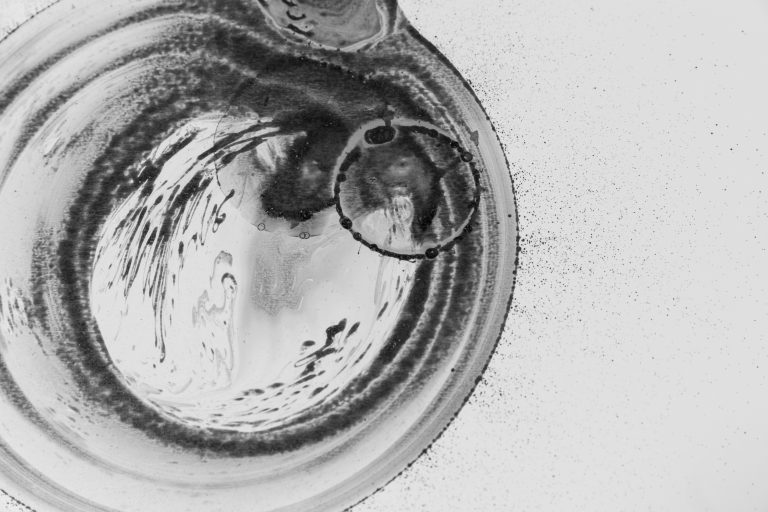 We go from darkness into light as we enter the final space for this gallery tour. Here, diverse works in blown glass, Pneuma, Aeolus, Aeroscale, Aerosolar Serpens (2018-2021) seek to heighten our consciousness of breath and its layered meaning across cultures. Saraceno notes how the Inuit people call the amalgam of breath, spirit and life silla, similar to the Yupik term ella, the source of all breath, life and awareness; in Quechua, sama (breath) and samay (breathe) also mean to pause or to reset; the Greek pneuma translates to ‘air,’ ‘breath,’ and ‘spirit’; in Hawaiian ha (breath) is related to mana (spiritual force); traditional Chinese medicine connects breath to life’s cosmic energy through the word chi; and in English, the word ‘spirit’ comes from the Latin spiritus, meaning ‘breath’. For Saraceno, this entanglement of breath and spirit is not only fundamental to diverse cultures, but also non-human beings. His works Hybrid Spider/Webs (2019-2020) and Spider/Web Maps (2018-2020), look at the effects of air particles on creation (particularly of size PM2.5) cling to a spider’s web, altering and damaging it over time. Completing the show, Radio Galena (2020) sits before a barred window. A crystal radio receptor, it is powered solely by the radio waves it receives when in use, requiring neither batteries nor solar panels. For Saraceno, this work placed before the barred window recalls clandestine radios used in times of political strife, and reminds us of human power to overcome structures of control using the simple, nonharmful materials and natural energies of our planet.

neugerriemschneider presents a screening of Tomás Saraceno’s film Pacha (2020) at Kino International (Karl-Marx- Allee 33, 10178 Berlin) at 10 am Sunday, September 19, during Gallery Weekend Berlin. The screening will be followed by a discussion with the artist. The film documents the performance of the Aerocene Pacha , a vehicle flown by pilot Leticia Noemi Marqués using only the sun and the air, with the message “Water and Life are Worth More than Lithium,” written by the indigenous communities of Salinas Grandes, Jujuy, Argentina emblazoned on it. Pacha captures the voices and struggles of the local communities, whilst documenting flights and performances that set 32 world records and brought us into the era Saraceno describes as ‘the Aerocene’.

Taken together, We do not all breathe the same air offers us a heightened consciousness of breath, air, and atmosphere, with its many injustices but also possibilities for transformation in the future. Through recognition and renewal, it considers ways to breathe – and be – better together. 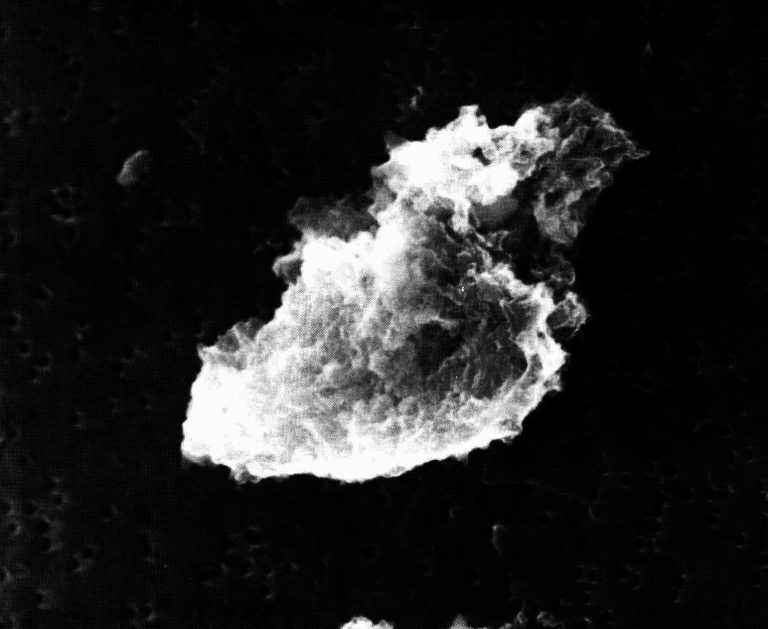 neugerriemschneider is pleased to present Jorge Pardo’s tenth solo exhibition with the gallery, titled for lilly reich. A series of new works by Pardo pays homage to Lilly Reich (1885 – 1947), the pioneering modernist designer, architect and collaborator of Ludwig Mies van der Rohe, among others.

Pardo explores Lilly Reich’s life, work and legacy as he synthesizes and adapts the visual narratives that surround her interdisciplinary work, speaking to the evolving recognition of Reich nearly a century after many of her landmark projects. Drawing upon myriad visual sources found online, Pardo has layered and digitally manipulated this diverse source material into new compositions, which are then colorfully reproduced by hand on CNC-engraved wooden panels.

Pardo and Reich, although separated by decades, share many parallels. Reich’s transformation of environments through her deft handling of material, form and function closely align with the approach to space and our experience within it that Pardo has taken over the past 30 years. Reich’s affinity for simplified forms is an approach Pardo admires for its “transparency, openness” and radical nature.

The exhibition for lilly reich takes place in dialogue with the opening of Jorge Pardo’s new installation Untitled (2021) at the Neue Nationalgalerie, Berlin, on August 21, 2021. An environment including light sculptures and intricate wall panels, Untitled houses the museum’s café, which was at the time of the building’s opening in 1968 called the “Erfrischungsraum.” Pardo’s work was commissioned to mark the reopening of the Neue Nationalgalerie – the last, and arguably most notable building completed by Mies van der Rohe – after six years of renovation by David Chipperfield Architects.

A new book, Conversations, is published by Inventory Press to coincide with these exhibitions. Transcribing over two decades of discussion between Jorge Pardo and writer Jan Tumlir, Conversations offers unparalleled insight into the evolution of Pardo’s work and the concepts that underlie his practice. Simon & Schuster also publishes a monograph on the artist titled Jorge Pardo: Public Projects and Commissions, 1996-2018, featuring contributions by Hans Ulrich Obrist, Maja Hoffman, Emma Enderby and Ian Volner on Pardo’s large-scale projects in public spaces. 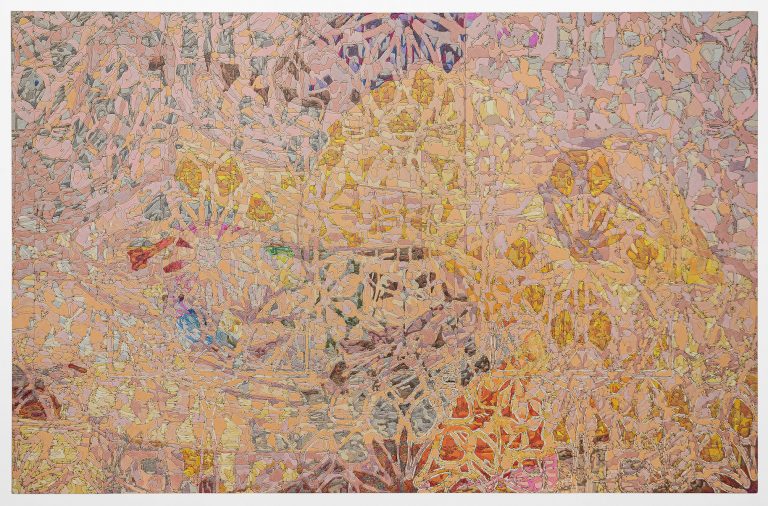