in conversation with …
Olivia Sterling

You include a lot of everyday scenarios in your paintings. Are they reflections of your (personal) lived experience?

Overall, my paintings are often about the strange nature of being a person of colour in societies that have a preference for a lack of colour. The basis of this show is a fake narrative of a dinner guest saying something unsavoury (perhaps even racist) to a waiter and the fantasy of reacting to it. Any marginalised person will tell you that it is often not worth it to react publicly to a micro- or macro-aggression (which, if not everyday, is a common occurrence for marginalised people), as it’s never clear whether the people around you will help or whether they might perceive you as aggressive instead, which will make you feel worse. The paintings touch on real-life situations which are deeply sinister. Moreover, I am often drawn to painting the concept of whiteness as something that can be both quietly and loudly violent. This is true of Small Openings where a woman is trapped in her seat, being harassed from both sides – unwanted touching is often a fact of outdoor life, especially for women. 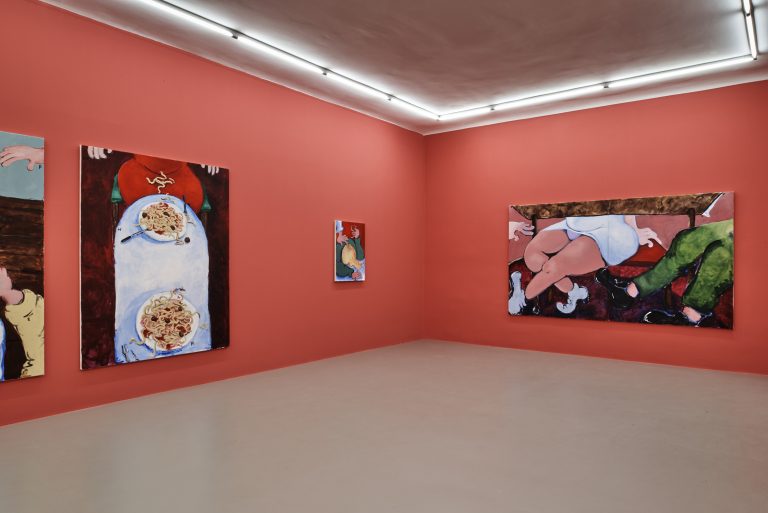 What is it about the social dynamic of restaurants that made you choose one as the setting for the show?
I was partially drawn to the concept of being ‘waited on’. Often dinner guests are imbued with self-entitlement, which is important to the concept of whiteness and white supremacy—his unquestionable implied importance that white people have. In this sense, the server/guest dynamic is similar to the power struggles of oppressor/oppressed. Restaurants have very obvious rules for the server and the guest, so the setting can become funny or interesting if these rules get broken. Notions of civility are challenged here as the “dining room”, where decorum is expected, and which is full of white guests, becomes chaotic. Whereas “the kitchen”, in contrast, has more of a community feel as the servers touch and comfort each other, rather than kick each other, throw things and drunkenly pass out. So, the dynamic of the restaurant aids me to make parallels, but it also allows me to subvert structures and stereotypes that are already in place. 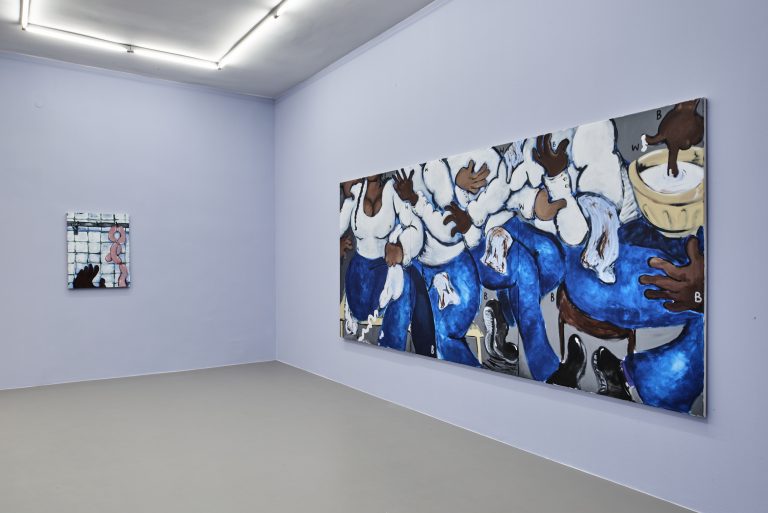 Why are you drawn to making humorous images?
I would consider that successful jokes are very similar to successful paintings. I believe it is easier to have something “happen” in a painting by telling a visual joke. The show in particular was born out of an interest in jokes as well as laughter as a form of control, i.e how the threat of embarrassment and humiliation plays into the way we act. It is also very telling who it is we laugh at—the more dignified the victim, the “funnier”  the attack. Before the advent of “alternative comedy”, a “joke” could very easily be laughing at a queer person, a black person or even just a woman. In reaction to this, the victims in my paintings are often white people, especially women, as they form a distraction to the key elements of the show—it is easier to focus on a slapstick image of a woman rather than thinking about the feelings of the black chefs and waiters who have just experienced a micro-aggression. Comedy also often requires a victim, and there are a lot of victims that one could easily laugh at in the show: from the man getting literally kicked out to the woman having cream dropped into her lap. I like having the power to place a white person as the victim when it is often the reverse in reality.
More Stories
SUBSCRIBE TO OUR NEWSLETTER