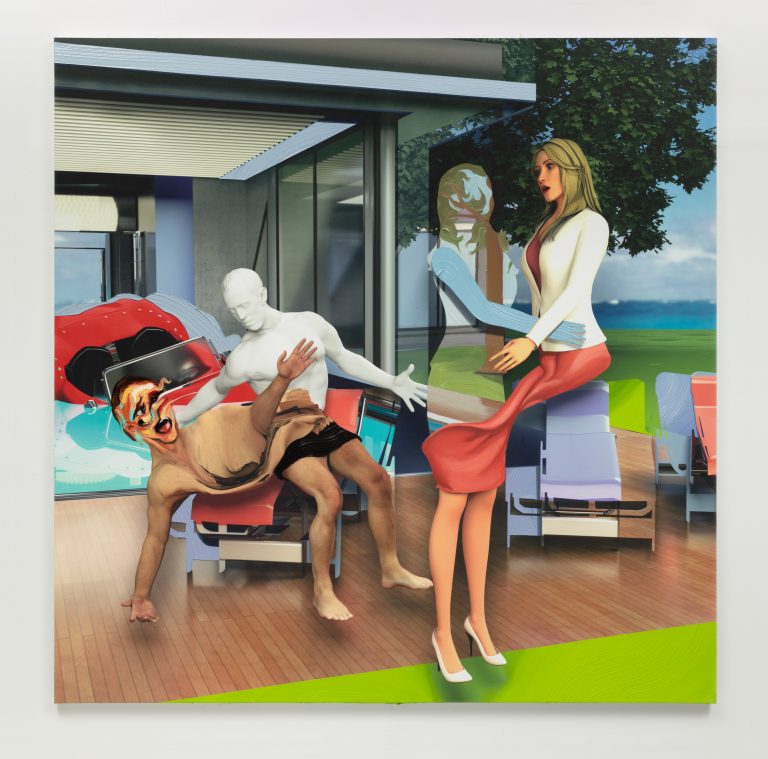 The word ‘rigged‘ is a vivid monosyllable during an age of discontents. Used equally in the US by the alt-right and far left, the term is tossed promiscuously at any system that seems unfair and fraudulent (which is to say, a lot of them). ‘Rigged‘ captures a slurry of disempowerment and frustration, a fear that we’re not the protagonists of our own stories, but rather playthings for shadowy tech billionaires who tug our strings and make us dance.

Pieter Schoolwerth’s latest painting series, Rigged, gives form to this collective delirium in a two-part exhibition at Kraupa-Tuskany Zeidler, Berlin and Petzel Gallery, New York. At stake is how we see the world and ourselves in an age of hyper-mediation, in which subjectivity is a constant visual exercise in construction and manipulation. Schoolwerth presents tableaux of figures whose exteriors collapse away from blank, mannequin-like husks: in one painting, a couple liquefies into wavy noodles inside a Vegas love suite. In another, a man’s face stretches tautly across the hide of a unicorn. Schoolwerth employs computer-generated imagery (CGI) to literally detach a person’s outside from their inside, a splitting of public presentation from private interiority. These animations produce the support onto which Schoolwerth layers a digital rendering of a relief modelling the painting’s space, and, finally, impasto paint. Faces are given dramatic gestural painting treatment, exaggerating their countenances in size and affect: Modern painting and social media share a preoccupation with the face as a stand-in for an expressive gestalt. Exuberant and artificial, programmatic yet barely regulated, CGI promises an expressive free-for-all governed by endless reproduction. In short: This is deepfakes gone wild. 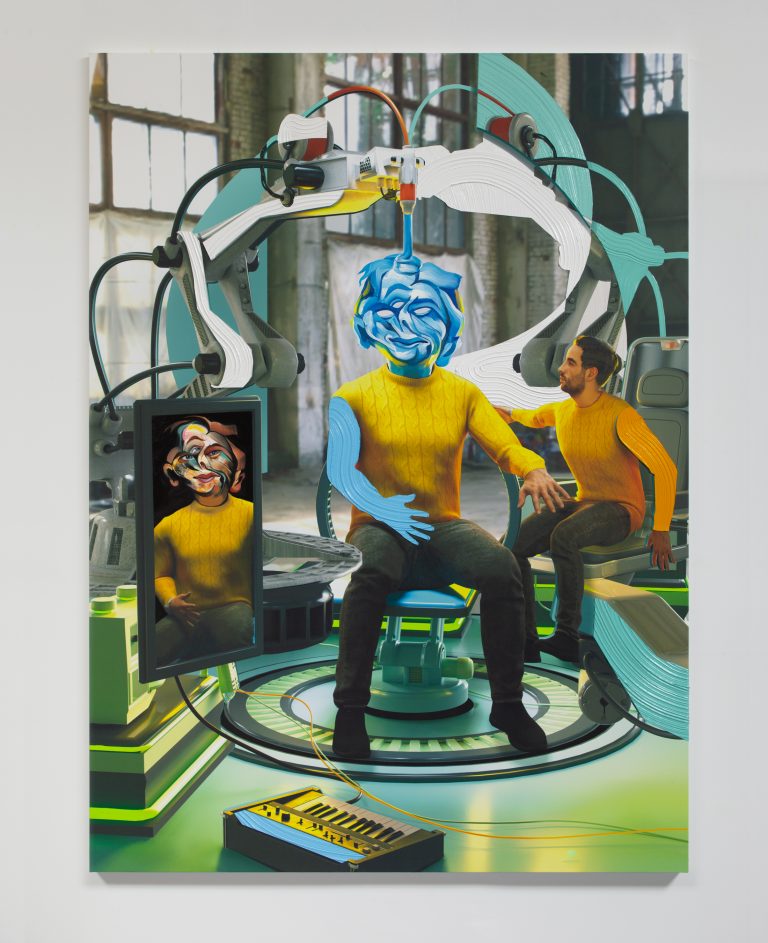 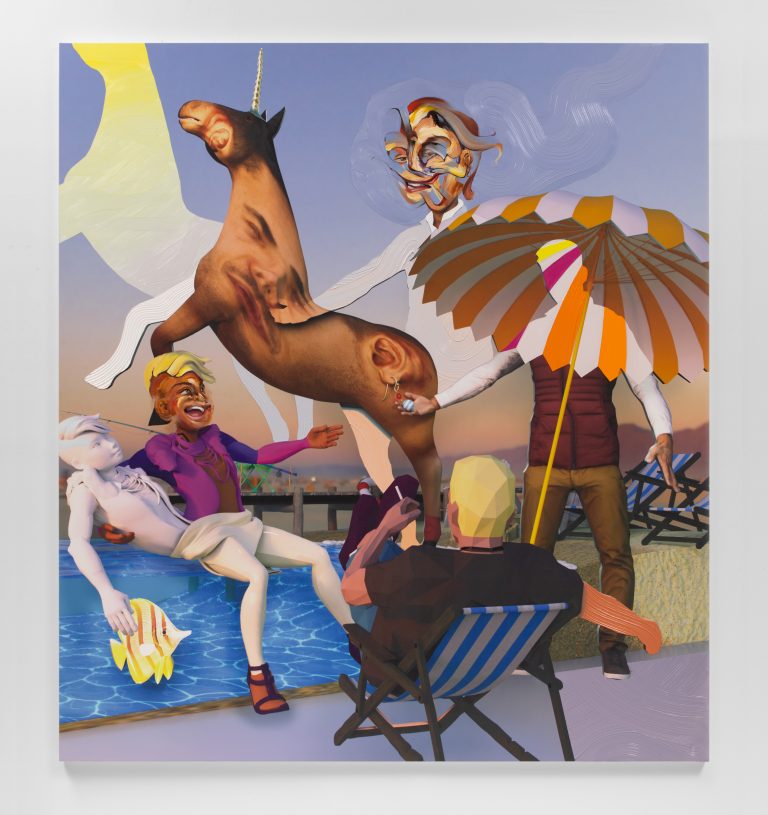 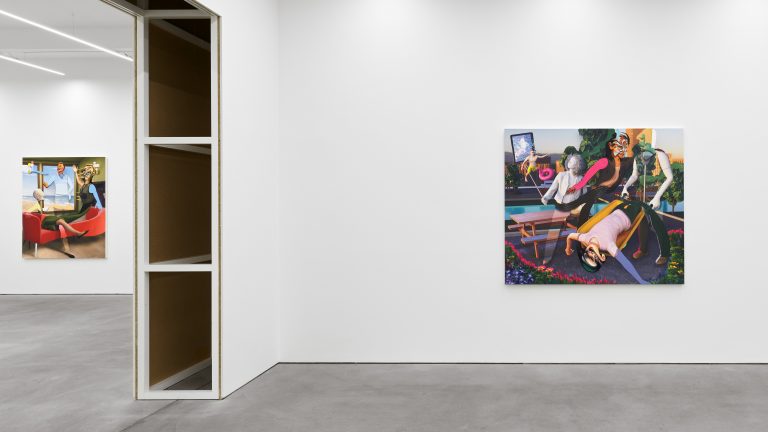 Every discrete aspect in these paintings, from a burnt-out Soviet factory to an ascot-wearing yachter, were purchased by Schoolwerth on sites like Turbosquid and CGTrader, global marketplaces where animation artists from Ukraine to Brazil sell their CGI wares. Purchasing more than 200 lower-end figures and set dressings, Schoolwerth’s casual encounters with globalized capitalism—at once anonymous and direct—mirror the transactional tenor of other, less explicit marketplaces like Tinder and LinkedIn. Schoolwerth collects characters whose expertly generic names (‘Caucasian man naked‘, ‘Alexandra pro bundle pack‘) avail them equally to discourse on appropriation and authorship—and to the facile meditation of one-click shopping.

To animate these characters’ jelly-like constitutions, Schoolwerth intervened by breaking the ‘rig‘, a hinge system that prescribes a character’s movement, not unlike a skeleton. Breaking the rig requires disconnecting a character’s surface, known as the ‘mesh‘, from the underlying infrastructure to which it is mapped. This process releases the image of the body to slide around on the rig like a cloth stretched over a bowling ball, a process Schoolwerth calls ‘UV map shifts‘. The formal possibilities are as endless as the binary digits that subtend the system: producing a portrait in the style of Picasso’s Cubism (a pathology unto itself) is achieved in Blender and other free internet software used by 12-year-olds across the world. This technology is easily obtained, but that does not imply democracy or liberation. Schoolwerth presents, with psychedelic clarity, how online platforms are not stable places to be a person. The violent lexicon of CGI animation—the system that mediates most images we see in each day—dissects people like an anatomical chop shop. The flexing of animated muscles are called ‘deformations‘; the surface of a character is a ‘texture file‘, attaching the texture file to its underlying polygonal mesh is called ‘binding the skin‘. Schoolwerth mines these linguistic excesses and other irruptions of meaning that the ‘rig‘ lets loose. 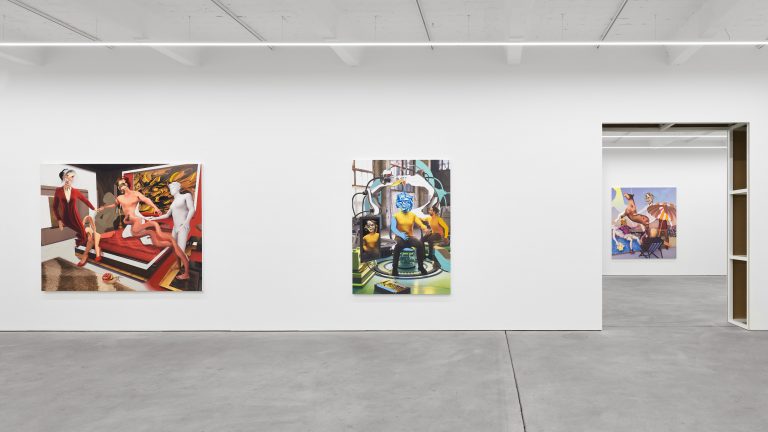 The heterotopias in Rigged pull back the curtain on the visual logic of 3D-modeling, which is largely agnostic to bygone value judgments like taste and beauty (quantity, not quality, is the rule). Instead, hyper-mediation has turned images—for Schoolwerth and Turbosquid vendors alike—into a defacto runoff grate for a torrent of anxieties: Who gets to be a person, to be alive, to be animated, to be on display? This unease around who counts and who doesn’t is endemic to the word ‘rigged‘. And in breaking the rig, Schoolwerth binds these constituent tensions to the intersubjective pandemonium they unleash. 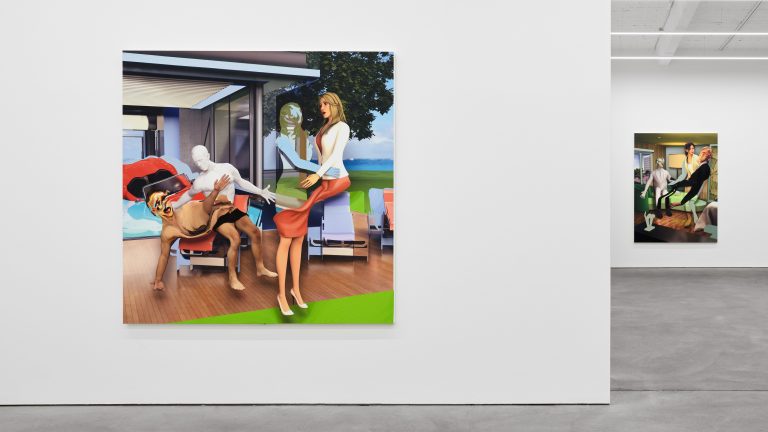 Pieter Schoolwerth explores and experiments with the effects of generalized abstraction on representations of the human form in painting. His works are complex compositions combining drawn, printed, painted pictorial elements and computer generated imagery. His method reflects the destabilized process of identity construction in an age characterized by increasingly abstract social relations. Schoolwerth literalizes the formation, superimposition, and alienation of the contemporary body through the manipulation of multiple media and layers of material content.

Pieter Schoolwerth, born in 1970, received his BFA from the California Institute of the Arts in 1994. He lives and works in New York.