The gendered performativity of social use value in the tech aesthetics are sardonically questioned by the artist. It is worth remembering that, as per Victorian repression, puritanical tech companies today filter out sex, censoring nudity on social platforms, perhaps as part of a continuing project to keep the subject in a constant state of infantilization. 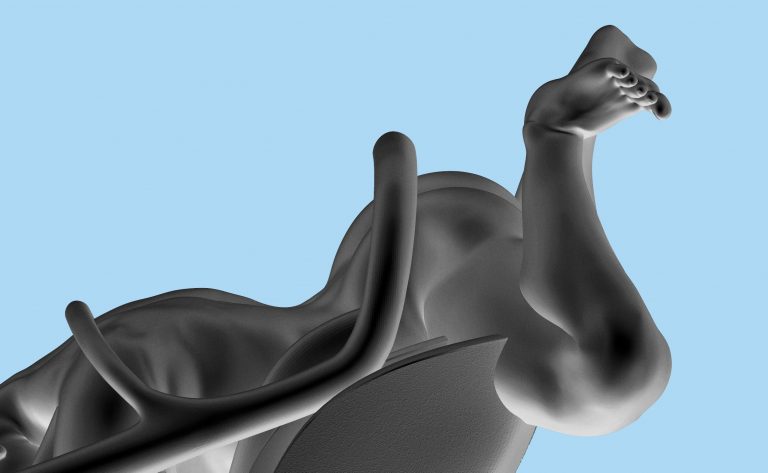 In the 1973 Ted Post film The Baby, an adult male is held captive by a family who keep him in a state of infantilization. Baby is never permitted to speak, walk, or do things for himself and is forced to both wear and use diapers. He receives negative reinforcement in the form of beatings, restraints or shocks with a cattle prod whenever he attempts to try to break out of the baby role. Baby is forced to remain in his state of perpetual dependency and infantilism since his actual infancy. A female social worker tries to rescue him from his “prison” and is herself hunted.

In Big Baby, Anna Uddenberg takes the cartoon hyper masculine images drawn by gay manga artist Jiraiya and Czech nouveau baroque furniture designer Bořek Šípek as points of departure to create a new body of work. In the illustrations, Uddenberg views the butch bearish men as big, cute babies making masculinity equally submitted to dependency fed by consumer-culture as per her previous hyper gendered female figures. Formally, and removed of the human subject’s presence, the works, with their rustic wicker details could “pass” as Šípek’s postmodern furniture, or evoke the childhood comfort of the Swedish imaginary of “mys.”

…in an era when online and IRL [in real life] identity are fused, performances of gender, whether glitched or in line with the status quo, all contribute to the same patriarchal machine… Uddenberg’s work reflects the complexities of a system that enables us to celebrate both individuality and sameness.” 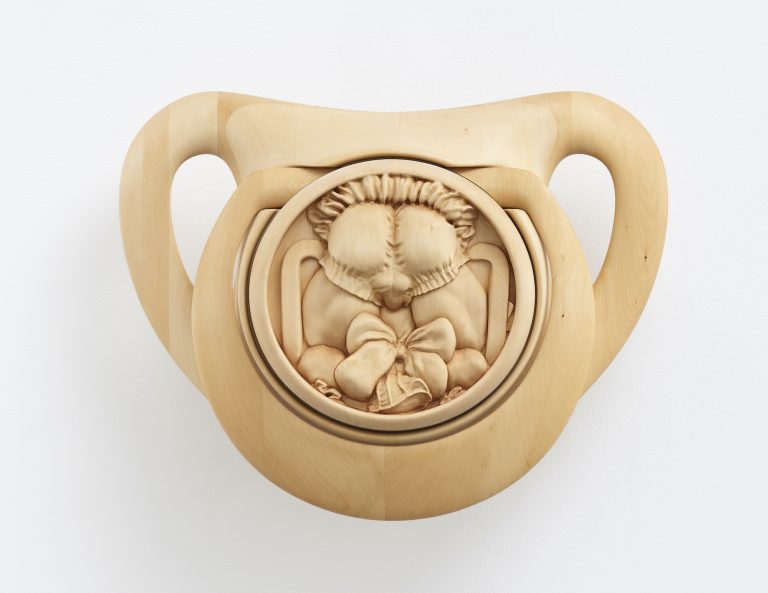 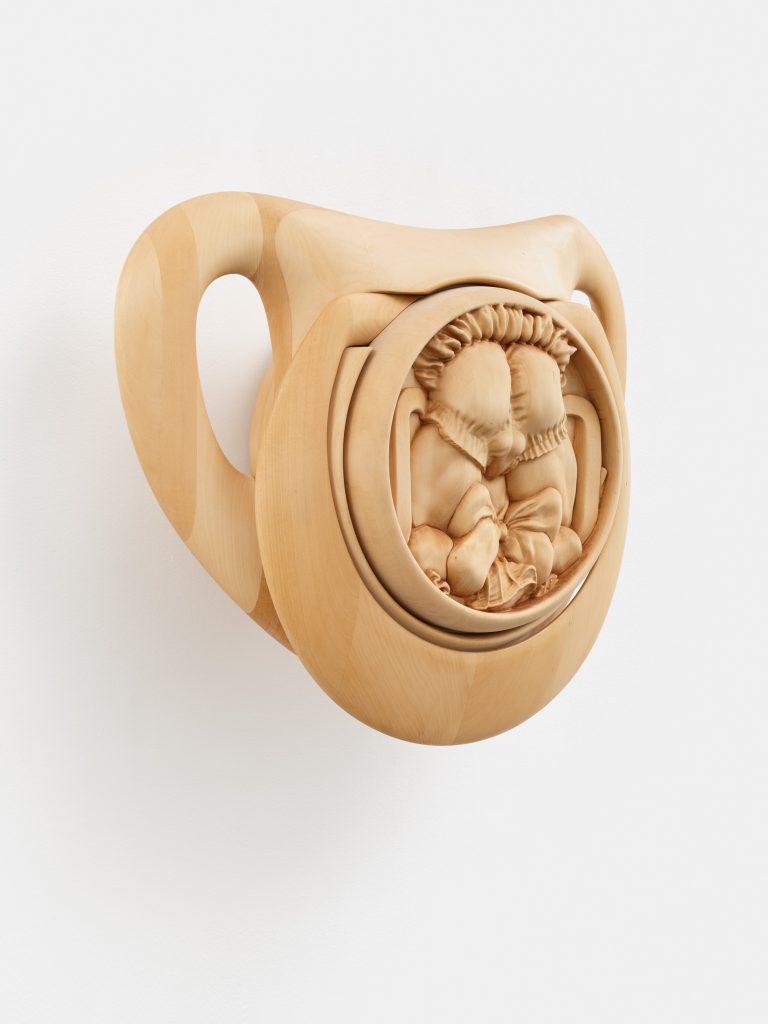 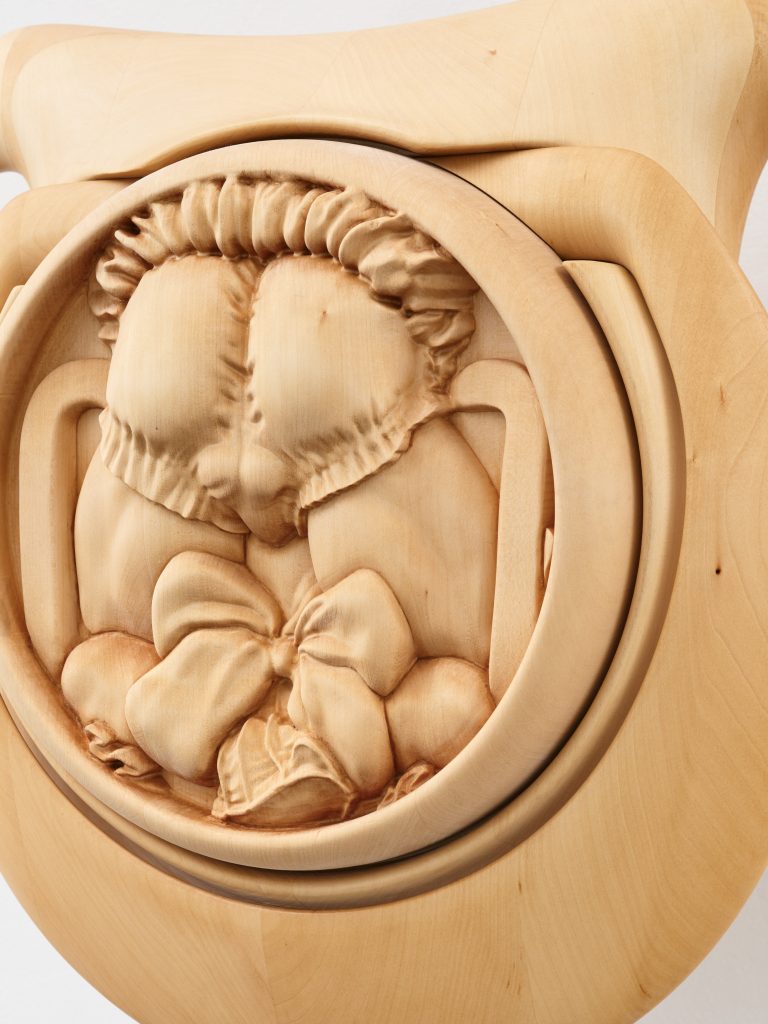 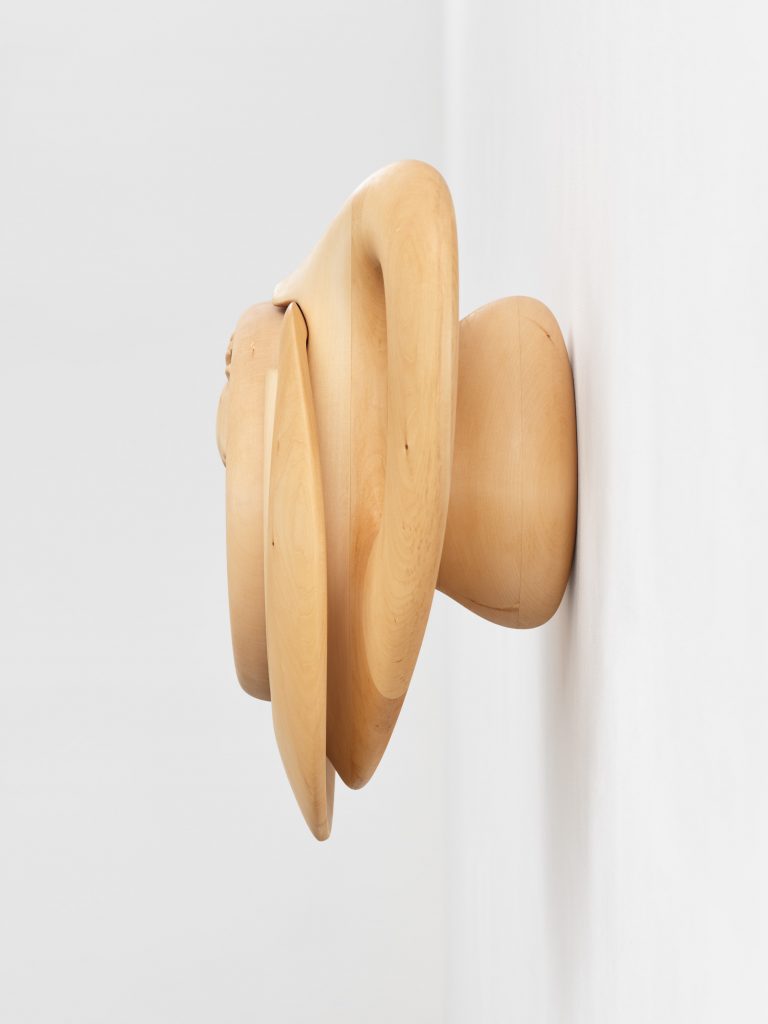 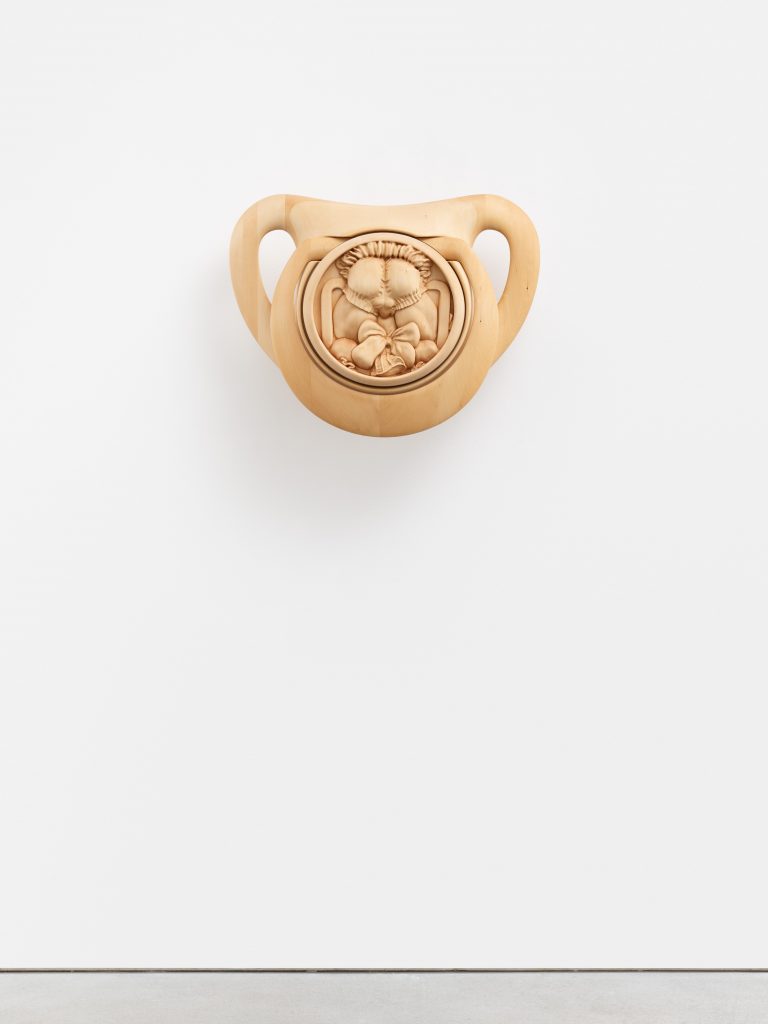 These artisanal cybernetic assemblages offer protection aided by a baby’s dummy/ pacifier, which frames each of the works, silencing the needy void of the gallery walls. The works signal a new step for Uddenberg–modelling the works in multiple 3D programmes and mechanically and manually carved out in wood. Upon first glance, the wooden works draw comparisons to more traditional forms such as Italian church reliefs or Wedgewood china, however, upon further inspection, the works conceal more lascivious works which we find in holy sites such as the gargoyles of Cologne Cathedral, or the Sheela Na Gig fertility statues in Ireland.

As per her previous conspicuous consumption of a performative self Uddenberg takes a satirical lens or “queer eye” to these new works, reimagining how masculinity can be offered protection and exist ontologically in the contemporary sphere. In our current age, we are “protected” from ourselves and others both on and offline by neo-paternalistic tech platforms who offer liberation but increasingly censor what we can see, think and say. Rhetorical bogeymen are demonised to “save” the “children.” But what if the children are actually adults in need of some liberation from those “saving” them?

In her book States of Injury (1995), Wendy Brown states that when subjectivity is presented as a wounded category, attempts towards social justice are in danger of handing over more power from the individual and allowing the state to reinforce even more control under the rhetorical guise of “protection,” paradoxically giving the subject even less power. Uddenberg instead offers a spirit of toddler-esque rebellion or age play against the status quo. The viewer is invited to voyeuristically imagine themselves in these sites of “protection” if one so desires to enter the contract, baby-pilled into a Songs of Innocence state of bliss.