The Konrad Fischer Galerie Berlin is pleased to present works by Thomas Schütte. In the courtyard of the gallery, the two bronze sculptures “Man with Flag” and “Man without Face”, both over four meters high, both 2018, await the visitor. In addition to sculptures in bronze, steel and glass, the exhibition of the artist, who lives in Düsseldorf, also presents coloured ceramics, including recently created “Women’s Heads”, the large-format portrait busts of “Experten I-V”, “Ghost Heads” and a group of “Garden Gnomes” created in 2016. 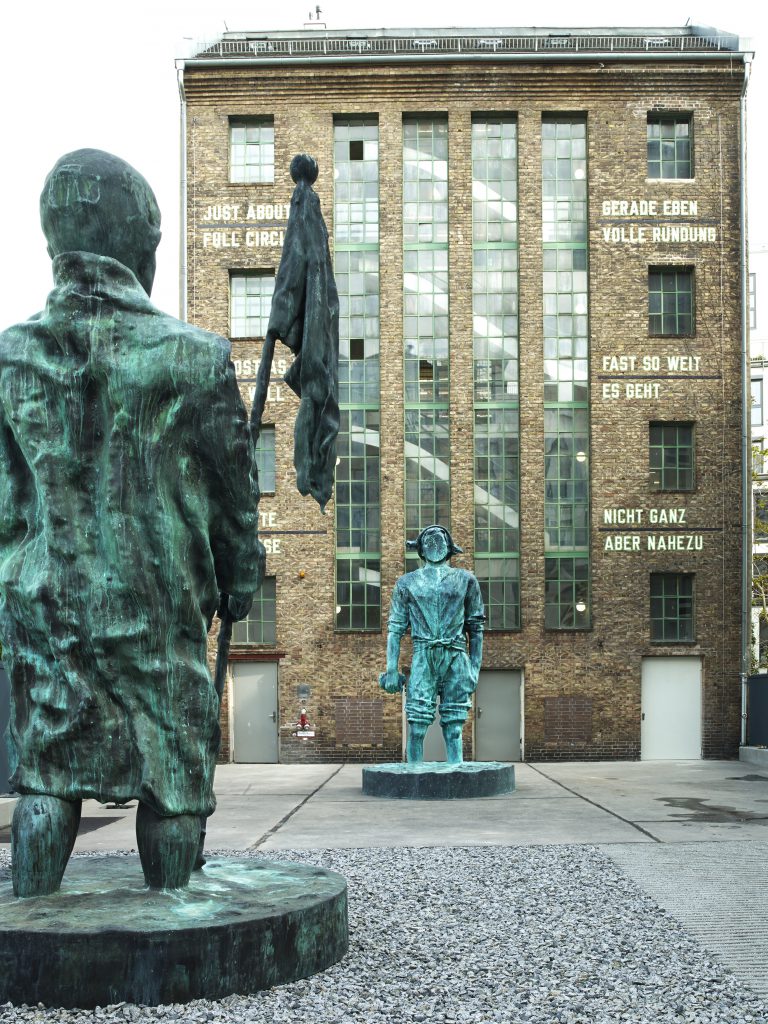 “The image of the stuck man has accompanied me for 26 years, the “man in the mud” exists in many different variations – sometimes small, sometimes as a sketch, sometimes as a model, sometimes just the big head. (…) Actually, the starting point of this sculpture was a technical error, namely that my very first figure, a small wax man, did not want to stand on his modelled feet, and after several attempts, it was unceremoniously poured into a plastic box and could thus be brought to a halt. He was stuck in all sorts of mud and nonsense, but nevertheless it went on, and now, with the casting of the sculpture, fortunately, the circle closes.“ 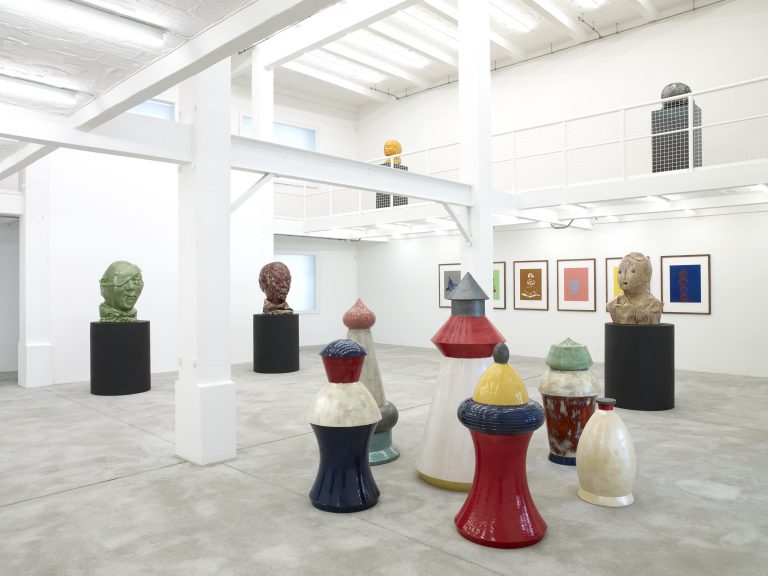 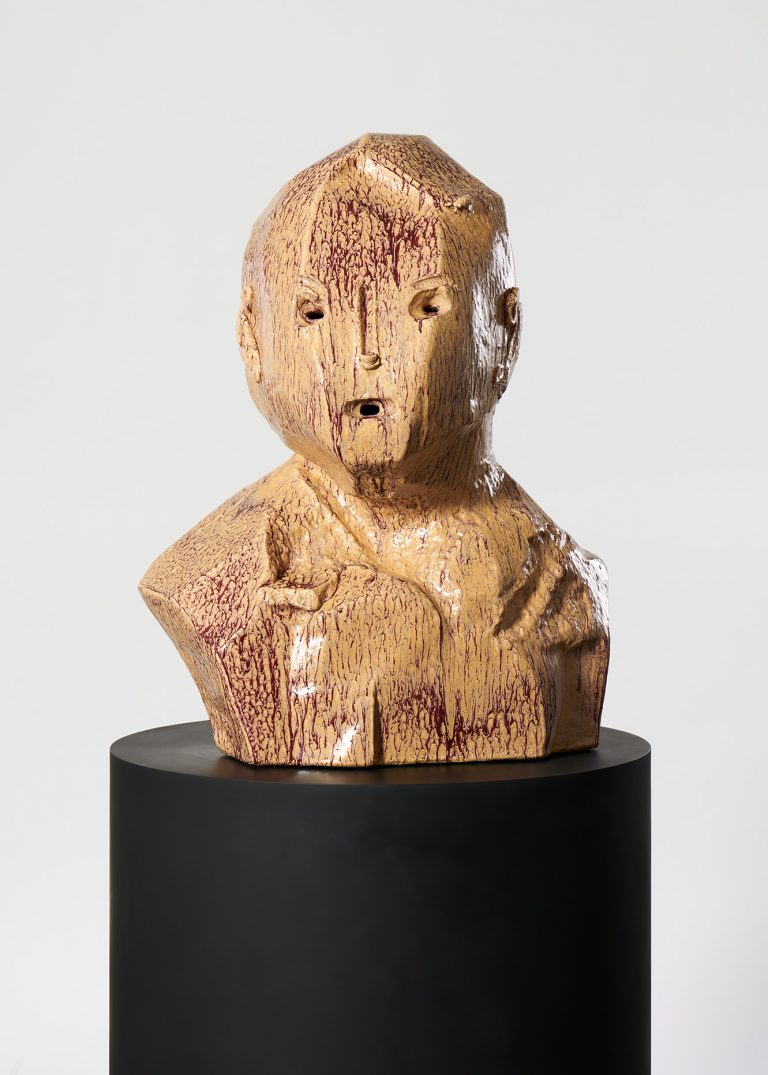 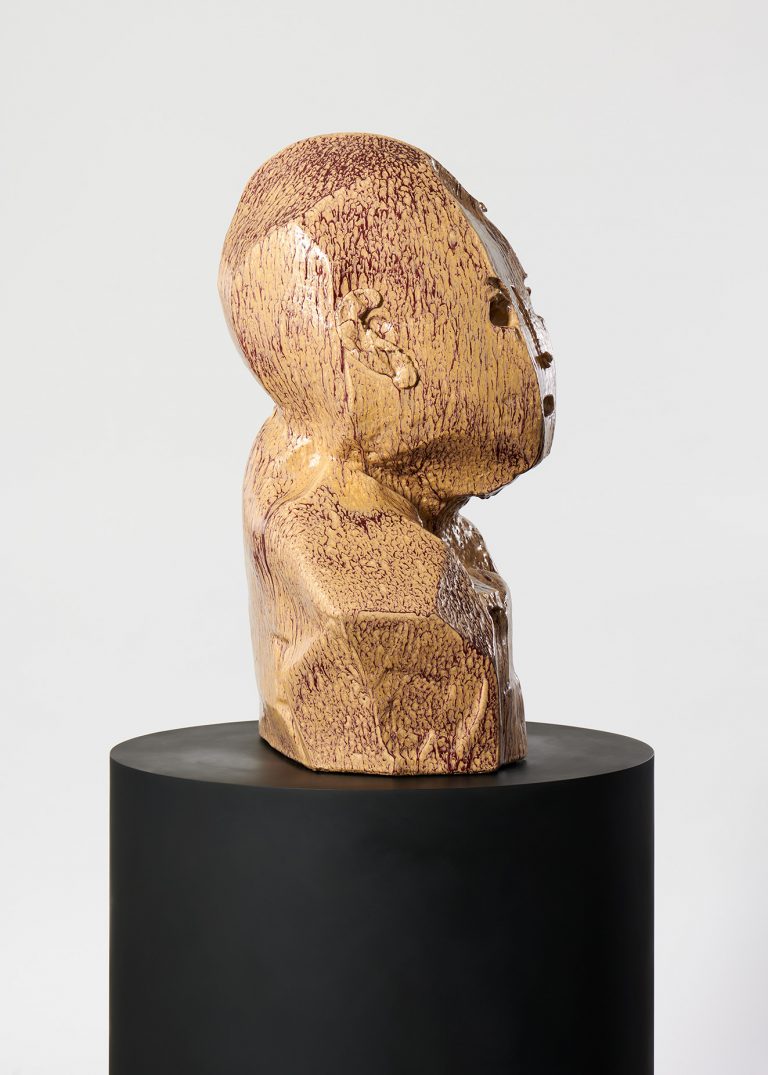 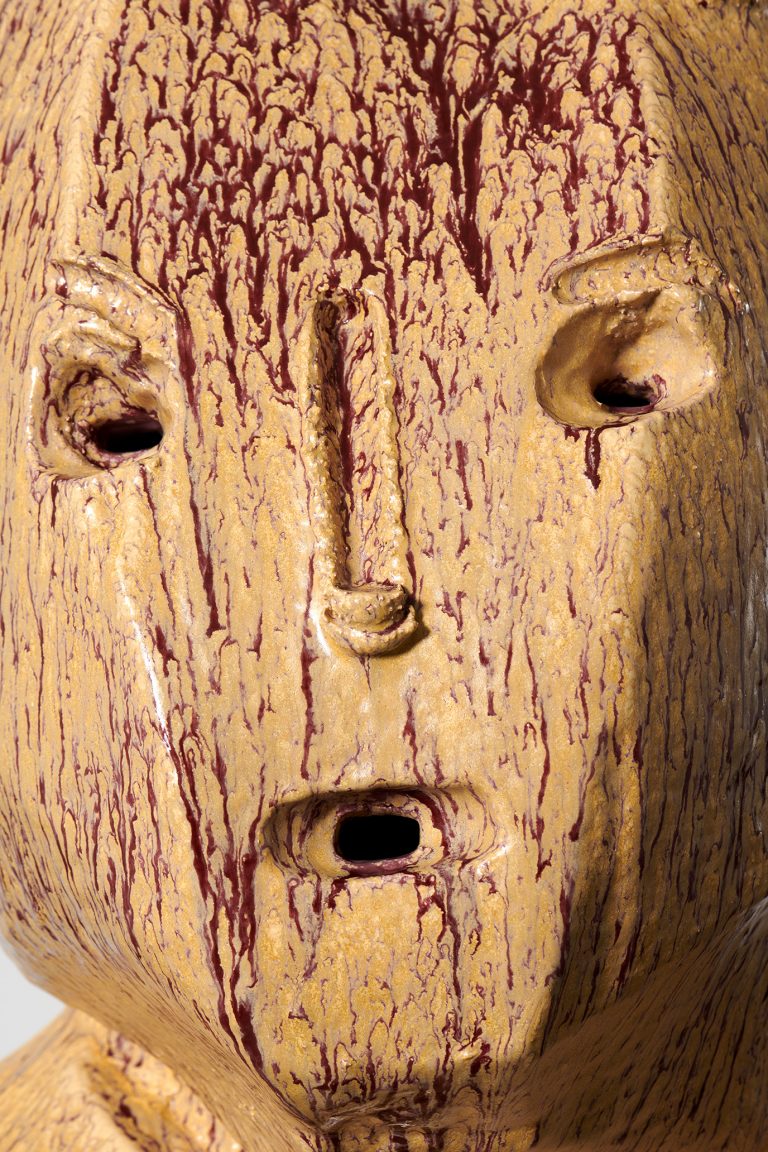 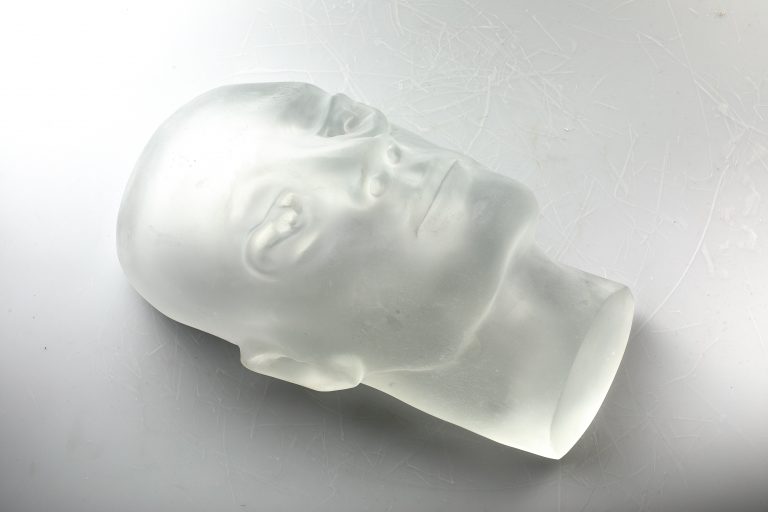 Thomas Schütte (*1954 in Oldenburg, lives and works in Düsseldorf) studied at Düsseldorf Art Academy from 1973 to 1981, initially in Fritz Schwegler’s class, and later with Gerhard Richter. As early as 1981, Schütte participated in the now legendary “Westkunst” exhibition in Cologne and had his first solo exhibition in the Konrad Fischer Galerie. Important exhibitions followed at the Staatliche Kunsthalle Baden-Baden (1988), the Van Abbemuseum Eindhoven, the Musée d’Art Moderne de la Ville de Paris (1990), Hamburg Kunsthalle (1994), Whitechapel Art Gallery (1998), the DIA Center for the Arts, New York (1999), Museum Folkwang, Essen (2002), Kunstmuseum Winterthur (2003), and the Henry Moore Institute in Leeds, as well as Liechtenstein Museum of Art (2007/2008). Key museum presentations of recent years have been at the Haus der Kunst in Munich (2009), the Bundeskunsthalle Bonn, the Reina Sofia in Madrid (2010), the Castello di Rivoli in Turin, (2012) and the Monnaie de Paris as well as Kunsthaus Bregenz (2019). In autumn 2021, the MoMA in New York will dedicate its next major solo exhibition in the USA to Thomas Schütte. Schütte participated at the documenta in 1987, 1992, and 1997. In 2005 Thomas Schütte was awarded the Golden Lion for his presentation at the Venice Biennale. Since 2016, Schütte has been exhibiting the work of artists including Mario Merz, Richard Deacon, Paloma Varga Weisz, Juan Muñoz and Richard Long in his sculpture hall in Neuss. Architecture based on Schütte’s model designs can be found today in Williamstown, MA (Clark Art Institute), Krefeld, Heilbronn, in Weil am Rhein (Vitra Campus), on the island of Hombroich, in France, Spain and Austria; his sculptures can be seen in public space in Chicago, New York, Venice, Winterthur, Essen, Kassel, Münster, Marl, Düsseldorf and Schütte’s birthplace, Oldenburg. 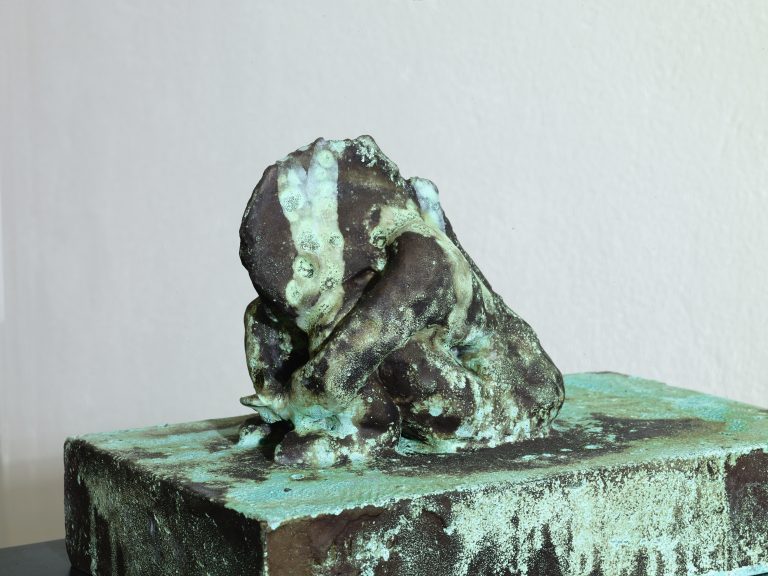 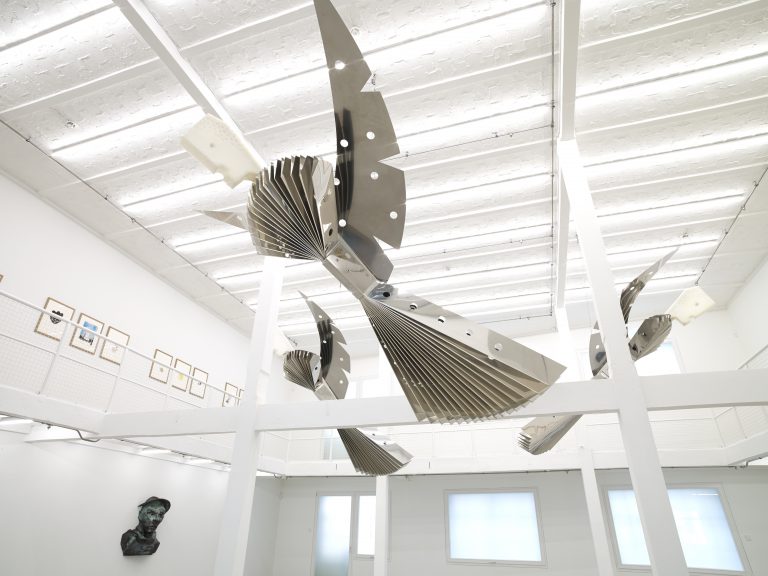 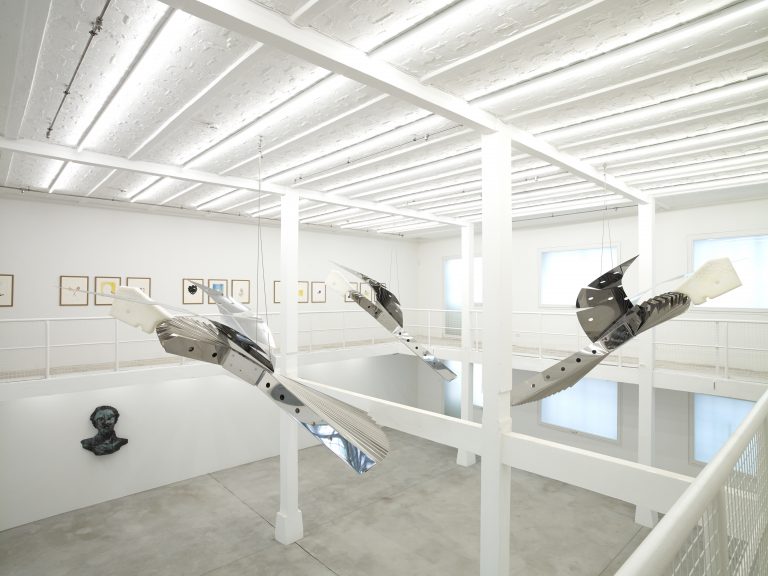