Galerie Max Hetzler is pleased to announce a solo exhibition of four new paintings by Raphaela Simon at Bleibtreustraße 15/16, in Berlin. This is the artist’s fourth solo presentation with the gallery.

In these new works, the evolution of Simon’s visual language over the past few years is made evident. Where the early paintings showed abstract representations developing out of simple, often geometric forms, the recent works take a more figurative approach—pointing not towards realism, but to the essence of her subjects. Concise titles provided in German, the artist’s mother tongue, invite personal associations while conveying the humorous undertones in Simon’s work. Where the titles in earlier works had a rather symbolic character, they now appear to have a more descriptive role. 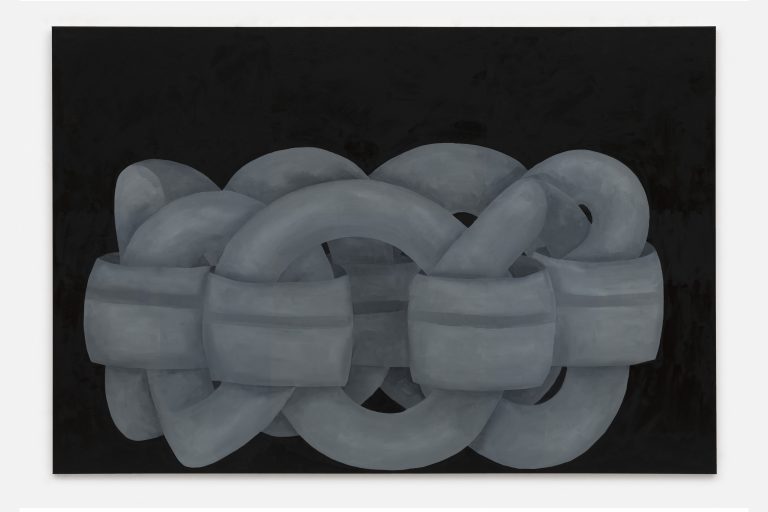 On view for the first time, the works presented include depictions of jewellery, a whip of cream and a mysterious Blauer Käfig (Blue Cage), 2020. The contrast between the glamorous and the ordinary, desire and unease, opens up an exciting perspective and demonstrates how Simon’s fascination with elements of everyday life does not aim for realism. Instead, the artist creates novel painterly translations of chosen motifs through an intensive examination of composition, colour and form.

The new paintings mark a significant shift in terms of colour palette; the pastel and vibrant tones found in earlier works are replaced with more sombre, elegant hues. Black, grey, blue and white dominate the present exhibition, recalling the tradition of “grisaille”. In this way, Simon emphasises the haptic quality of her multi-layered oil paintings more strongly than ever. Großer Ring (Big Ring), 2021 brings this to life with soft shapes rendered in rich nuances of grey. Abstract, cubist-like fields painted in luminous hues of deep blue, on the other hand, reflect the shimmering materiality of the sapphire in Edelsteinring (Gemstone Ring), 2021. The depicted objects extend across the entire canvas and, with their larger-than-life scale, renegotiate the relation between the viewer and the pictorial object, separating function from form.

The dark monochrome backdrops support this engagement, a formal technique that Simon has been using since 2019 and whose exploration is intensified in the works on view. Rich black and intense dark blue saturate the backgrounds of the paintings, reinforcing the focus on both the characteristics and possible connotations of the subjects. Sahne (Cream), 2021, a classic dessert embellishment, stands in a new light against the unfamiliar dark background. On the one hand, the depiction awakens associations, nostalgic memories like those from one’s childhood. On the other, this common adornment becomes alienated, presented as a main protagonist, endowed with a sculptural quality in elaborate shades of white and grey. The result is an intriguing juxtaposition of the seemingly familiar—laced with memories—and a trace of the uncanny. 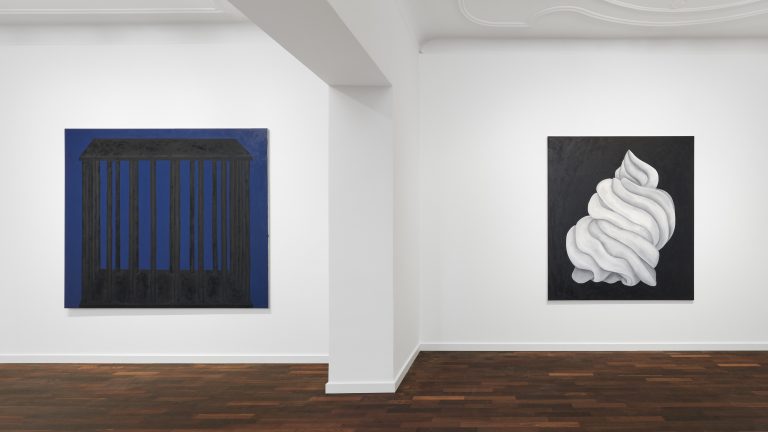 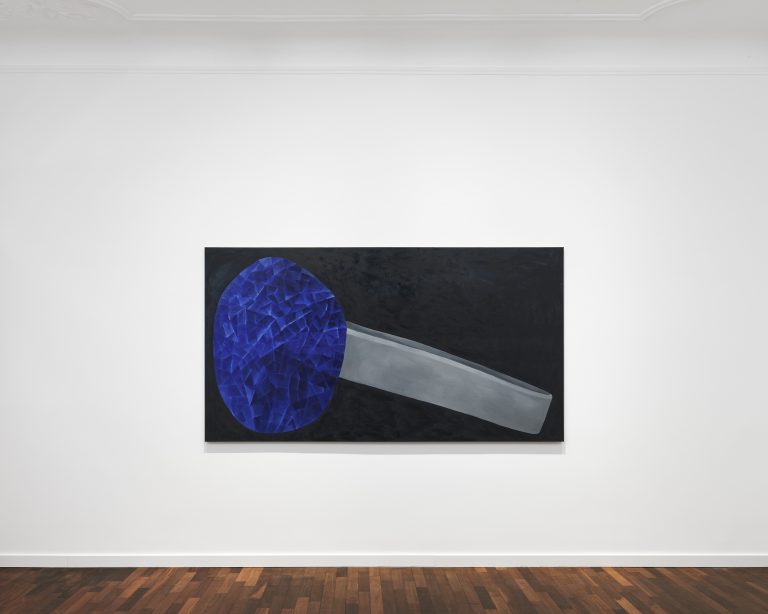 Far from the usual traditions of representation, Simon challenges the legacy of Pop Art figures, such as Claes Oldenburg (b. 1929), with her playful questioning of common notions of everyday life. Isolated against monochromatic, void-like backgrounds, the objects seem to take on a life of their own as they expand into the space of the viewer. Within the traditional medium of oil painting, they take on an almost portrait-like quality, inviting us to question the presence and essence of things—and therefore the subjective charge of meaning—in the material world. 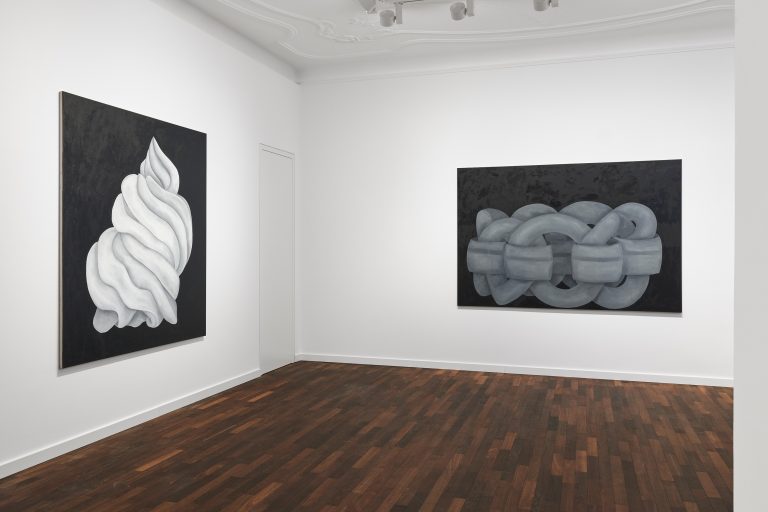 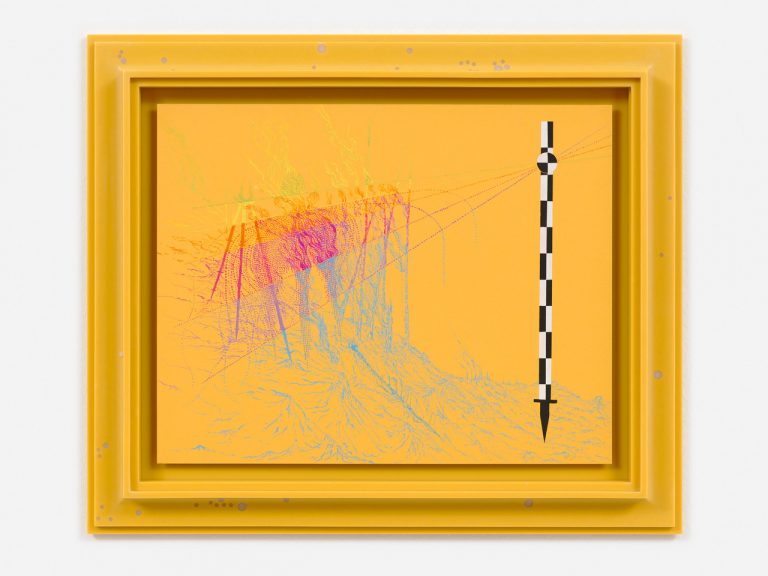 Galerie Max Hetzler is pleased to announce After Ruby Ridge, a solo exhibition of recent works by Matthew Barney at Bleibtreustraße 45, Berlin. This is the artist’s first solo presentation with the gallery and his first exhibition in Berlin since Barney/Beuys at the Deutsche Guggenheim in 2007.

Featuring over twenty new drawings and two sculptures, the exhibition is part of a series of shows related to Barney’s feature-length film Redoubt, 2018. All of the works draw from the visual language of the film which plays in the remote Sawtooth mountains in Idaho and addresses such wide-ranging themes as cosmology, American frontier myths, and the role of artistic creation. The exhibition is titled after Ruby Ridge, the location of a deadly stand-off between a separatist family and federal agents in the mountains of Northern Idaho in the 1990’s. The title further complicates Barney’s statement that Redoubt is a portrait of a place, in all its complexity, beauty and ugliness.

Barney works in distinct series which are developed over several years, creating work that fuses sculptural installations with performance, video, sculpture, printmaking, and drawing. Drawing plays a primary role within his oeuvre; it functions both as preparation, in the form of sketches in the planning stage of a film or exhibition project, and also as a pillar of Barney’s artistic expression, from the days of his early career until today.

The drawings on view comprise graphite and gouache on coloured paper, in polyethylene frames made by the artist. They take their palette from the forest fires and skies in the Idaho region where the film Redoubt was made and depict encounters between figures and landscapes, as well as the technical apparatus of land management. Barney depicts extreme landscapes with an almost violent contrast between the natural and the technical, often displaying a harsh formal incongruity.

Among the works on paper is a series of graphite drawings on pale pink paper titled the Metamorphoses drawings, after Ovid’s mythical tales. Accompanying Ovid’s theme is often a violent transformation within an idyllic landscape. An explicit eroticism pervades these works, with the motif of the artist-as-voyeur revealing Barney’s interest in the central question of how an artist possesses his subject.

Accompanying the drawings are two new sculptures, titled Bore and Bole. Bore, 2021 is a monumentally-scaled sculpture cast and modelled from a burnt tree, harvested from a forest fire area in Idaho. It is made of brass and copper, materials found throughout Barney’s Redoubt body of work, combined with polycaprolactone (thermoplastic), which has also appeared continuously in his career. Here, the copper and brass have been cast to fit together as an intricate puzzle with the polycaprolactone trunk and bases. A helical groove that winds around the sculpture evokes both the spiral grain of the tree, and the rifling in the bore of a gun barrel. From the opening of the tree, a bore-snake protrudes, passing through the inside of the rifle form. This device, typically used to clean the inside of the rifle barrel, here takes on the guise of a ‘guest,’ pulling the narrative through the ‘host’ site of the tree.

Bole, 2021 is the first sculpture in Barney’s oeuvre that is entirely made of wood. It retains the original bole (trunk) of the tree felled in Idaho. The trauma of the burnt forest is visible in the charred surface of the tree, with carved wounds and secretions along the length of the bole evoking medieval religious wood carvings. This work combines traditional hand- carving techniques with digital milling, creating an adjacency between the tactical design of a precision weapon and the baroque expressionism present in sacred statuary. 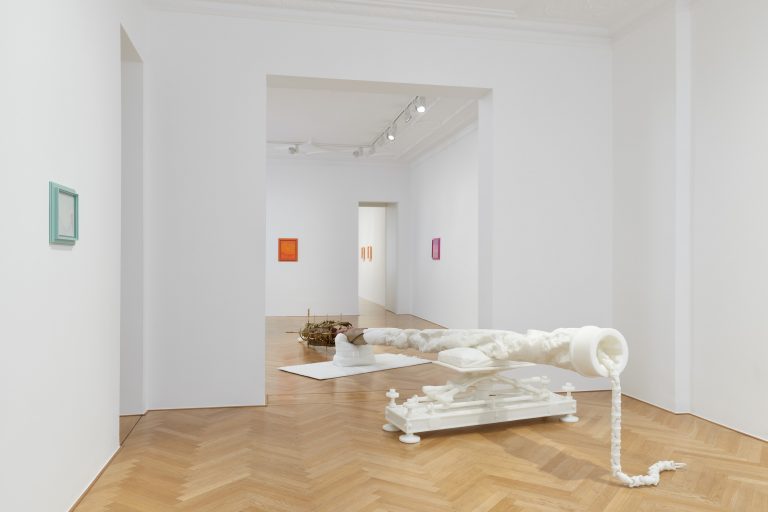 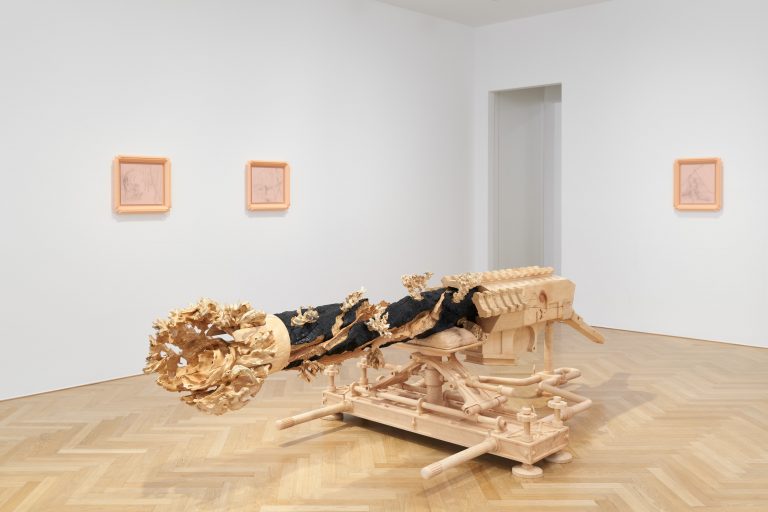 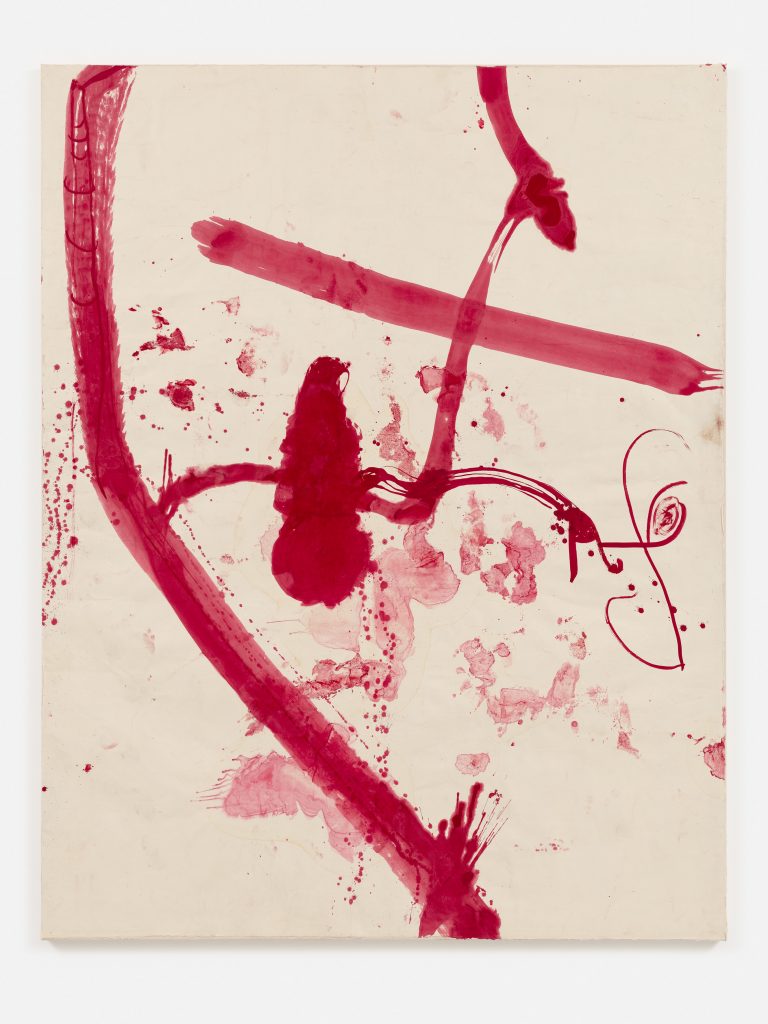 Galerie Max Hetzler is pleased to announce a solo exhibition of new paintings by Julian Schnabel at Goethestraße 2/3, in Berlin. This is the artist’s first solo presentation with the gallery.

Since the late 1970s, Julian Schnabel has sought to transform the possibilities of painting, through the use of unconventional materials, chance-based processes, large formats, gestures and charged pictorial grounds. His works marked a departure from painting as conventionally understood and were pivotal in the reemergence of painting in the United States, with his influence still visible today.

Featuring eleven new works, all painted with a large Japanese calligraphy brush, in a visceral red ink, the exhibition at Galerie Max Hetzler sees the artist experimenting with liquids, how things dry, and the power of the artist’s mark—how images come out of other things: ‘There’s always been this investigation’, he explains, ‘into how the paint sits on the surface and how to get a certain kind of painted reality to coexist with another one.’

On view for the first time, these two recent bodies of work can be identified by their different supports, with eight paintings executed on rice paper, laminated to canvas and three paintings on fabric from the fruit stalls of an outdoor market in Mexico. Schnabel considers found materials, their physical characteristics as well as history, essential components of his painterly compositions. 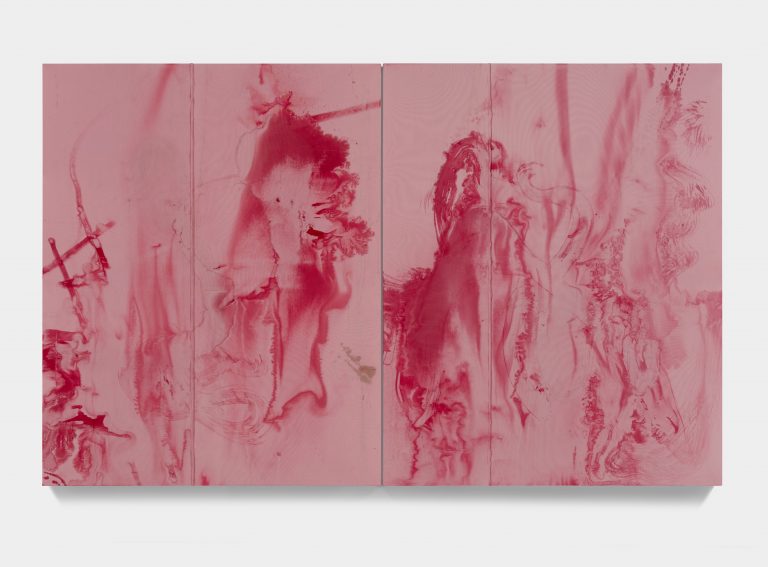 Titled The Parade Begins and the Parade Ends (for Reinaldo Arenas) [I- VIII], 2020, the first group of paintings pay homage to two texts written by the Cuban poet, novelist and playwright, Reinaldo Arenas (1943-1990) on the Cuban Revolution. Deeply sensual, the works fuse image and ground through gesture, scale and intuition. Using a hose in places, to dilute the red ink, the marks vary in opacity, reflecting the movements of the artist’s hand and the way the ink was sitting on the brush when it was applied to the paper. In some of the paintings it looks as though a tyre has driven over the surface, as parallel lines drip, sweep and scatter around aqueous forms.

Three double-panelled paintings are also on view, made with a very coarse, pink cotton, weathered by the sun. Grouped by the title, The Second Version of the Tower of Babel [I-III], 2020, they nod to an early ‘ Wax Painting’ by the artist, titled Tower of Babel (for A.A.), 1976-1978, inspired by the drawings of Antonin Artaud (1896-1948). In texture, they recall the series of ‘Velvet Paintings’ that Schnabel was working on in the 1980s and 1990s, as well as the surfaces of such seminal works as The Wind, 1985 and Fresh Eggs, 1985, in which the artist painted on weather- worn material, guided by traces left by the dirt. Whilst Schnabel used hard lines and modelling paste in these earlier works, to propel the images forward from their supports, here, he uses water to soften the forms, allowing the ink to dissolve into the fabric. From here, images arise from the surface, much like a Rorschach test, encouraging viewers to conjure images that may or may not be there: ‘I mean you see images come out of these things. But none of that is premeditated. It comes out of the process.’ He likens the experience to looking at clouds.

For Schnabel, painting has always been an act of discovery; by ‘ intentionally painting the unknowable’, his works yield ‘a more faithful representation of experience than any attempt to realistically depict the physical world ever could.’1 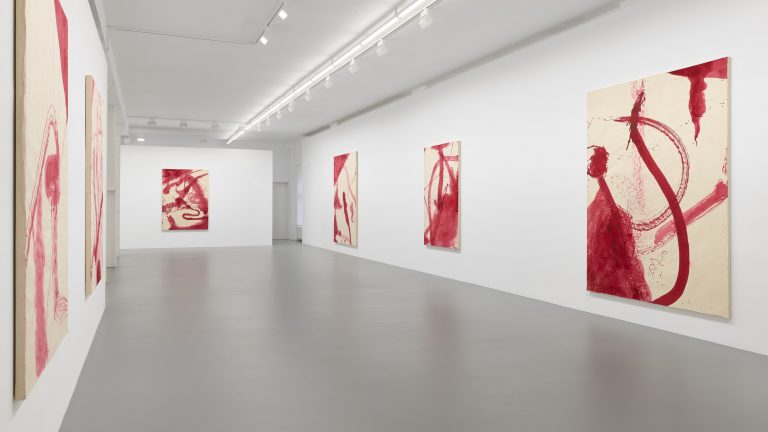 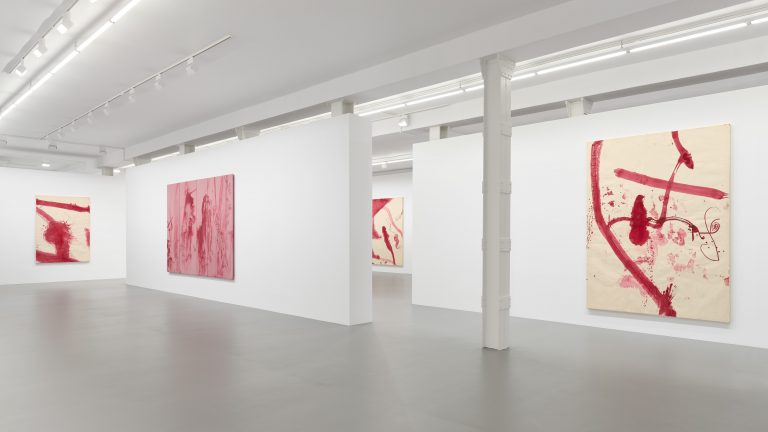