Cemile Sahin*
It Would Have Taught Me Wisdom

Cemile Sahin*
It Would Have Taught Me Wisdom 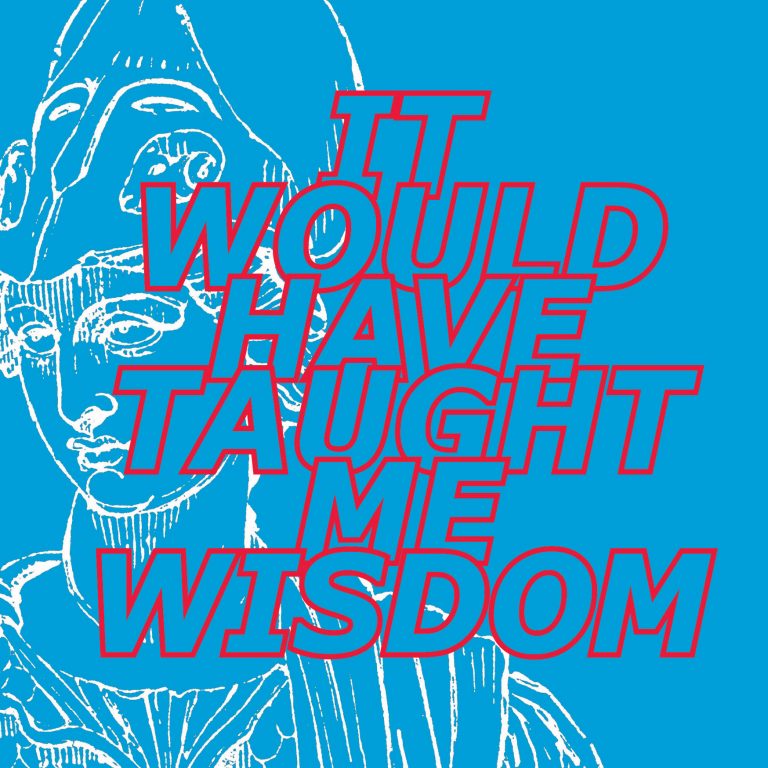 Esther Schipper is pleased to present It Would Have Taught Me Wisdom, Cemile Sahin’s first presentation with the gallery. Her new installation creates an environment in which text and image are entangled: it is composed of colored plexiglass panels with digitally printed collaged elements, forming a sculptural structure, set against a wallpaper representing the signing ceremony of the Sèvres contract. In both the imagery and its underlying narrative, the new work draws on the artist’s research into the treaties of Sèvres (1920) and Lausanne (1923) and their ongoing impact a century later. A major motif is a digitally reconstructed 3D model of a porcelain statue—an écritoire, or inkwell, above which the goddess Minerva sits enthroned—which was the centerpiece on the table where the Sèvres treaty was signed.

The work’s title, It Would Have Taught Me Wisdom, is taken from a quote attributed to Prussian king Wilhelm II’s about the coveted Minerva sculpture, which was the starting point of Sahin’s non-linear research into the treaty of Sèvres. It was the last of the treaties reordering nations, redrawing borders, and redistributing territories after World War I. The Ottoman Empire was forced to give up 80% of its prewar territory, and although it was never ratified, the harsh conditions of the contract continue to echo as a traumatic event in Turkish politics, instrumentalized in nationalist rhetoric to this day to symbolize an external threat to the integrity of the Turkish state. Sahin is currently developing a series of films about both treaties, and their lasting repercussions for the region. 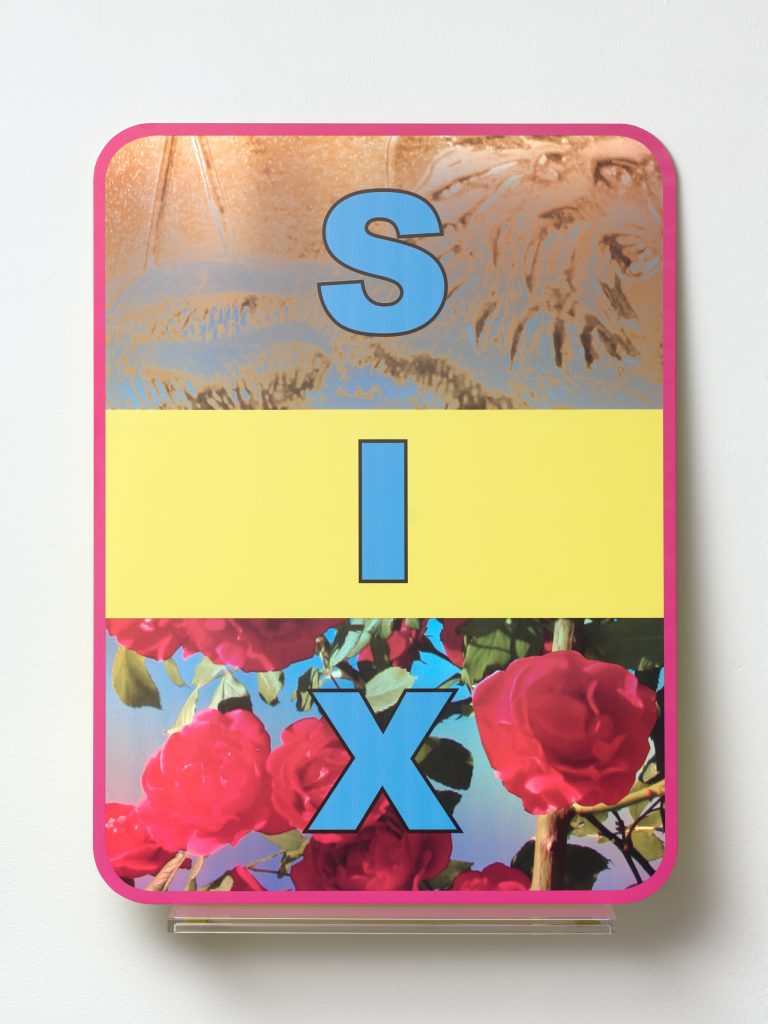 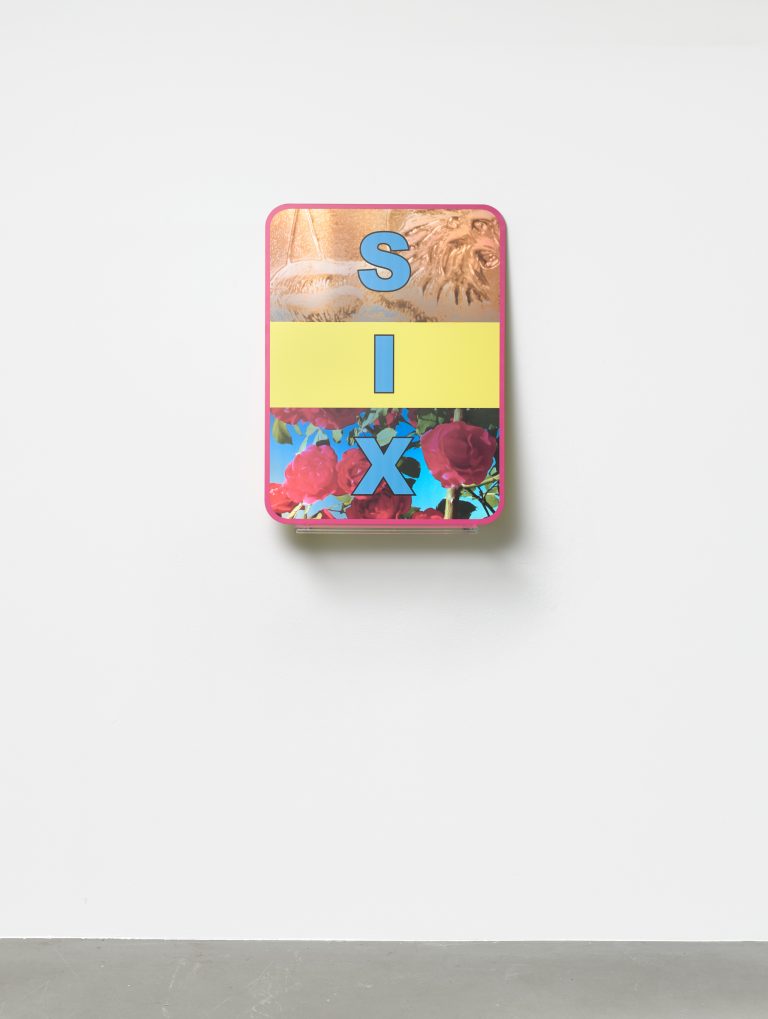 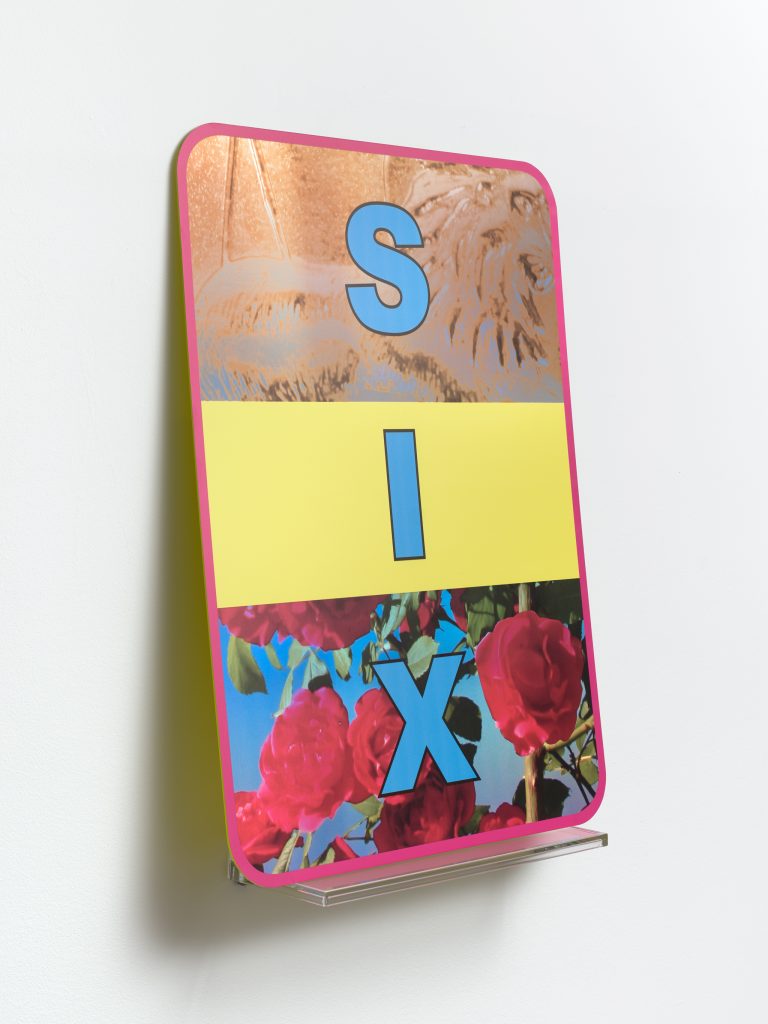 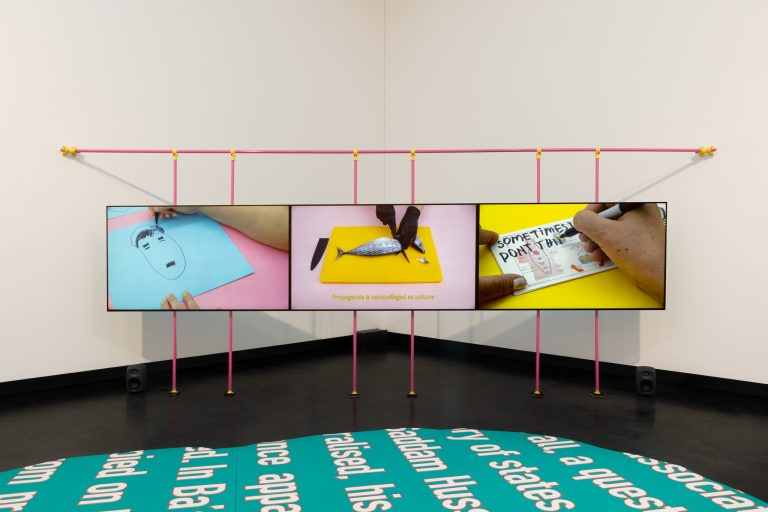 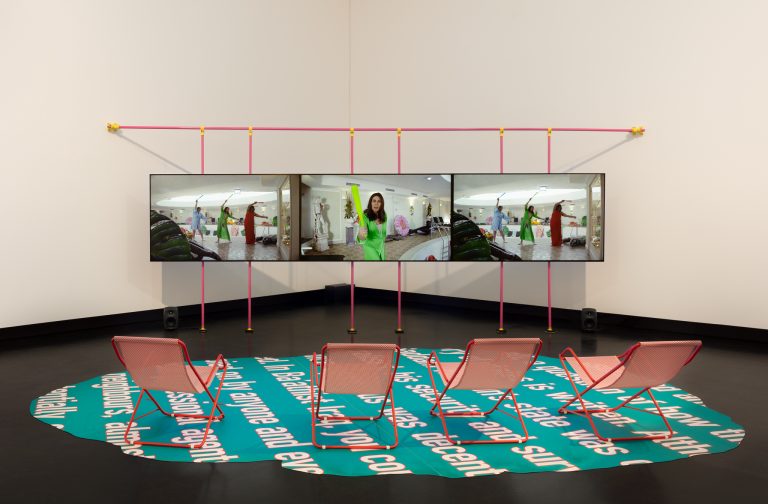 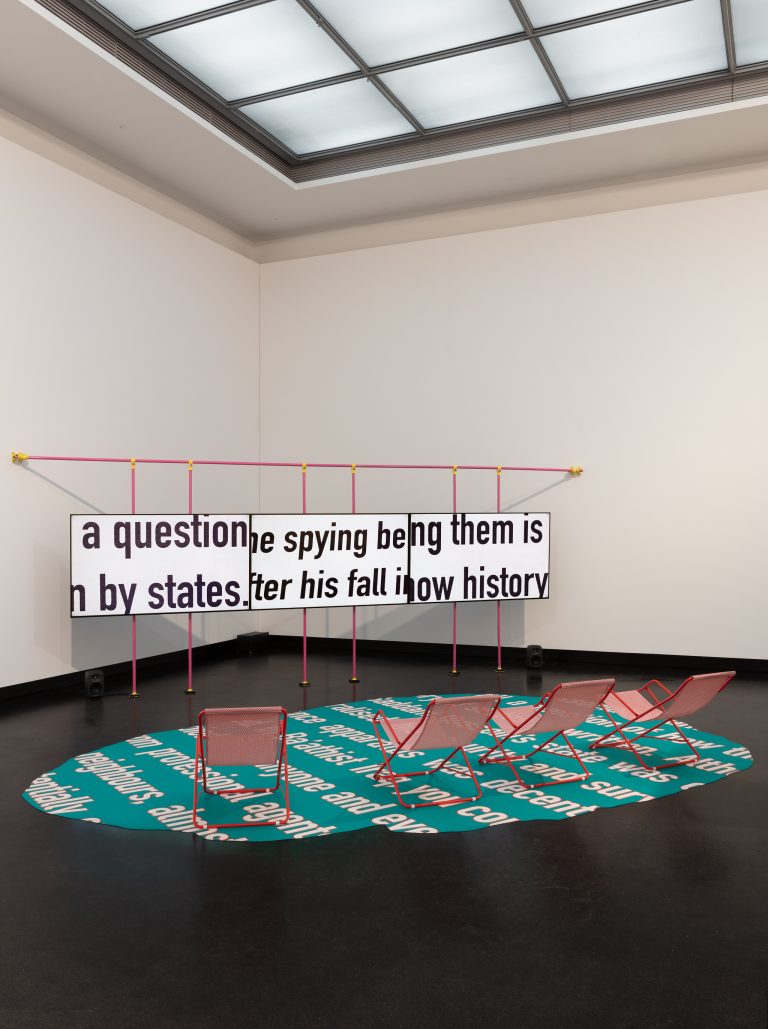 Cemile Sahin’s artistic practice operates between film, photography, sculpture, and literature. Freely deploying different media, without privileging one or the other, her work embodies today’s synchronicity of image- and text-based communications. Integrating images into her books and text in her image-world, Sahin moves with extraordinary agility between words and pictures, between still and moving image, between text as form, sign, and symbol. Deliberately elliptical and fragmentary, her work’s narrative strategies draw on an episodic format of narration established by contemporary TV series and internet videos. In her practice, Sahin acknowledges the subjectiveness and codedness of all storytelling, and its instrumentalization by the media. Her works find a giddy rhythm in the knowing use of the dynamics of these processes, sweeping away her spectators to unexpected, and sometimes uncomfortable realizations, among them that the writing of history is, and always has been, determined by constantly shifting perspectives. 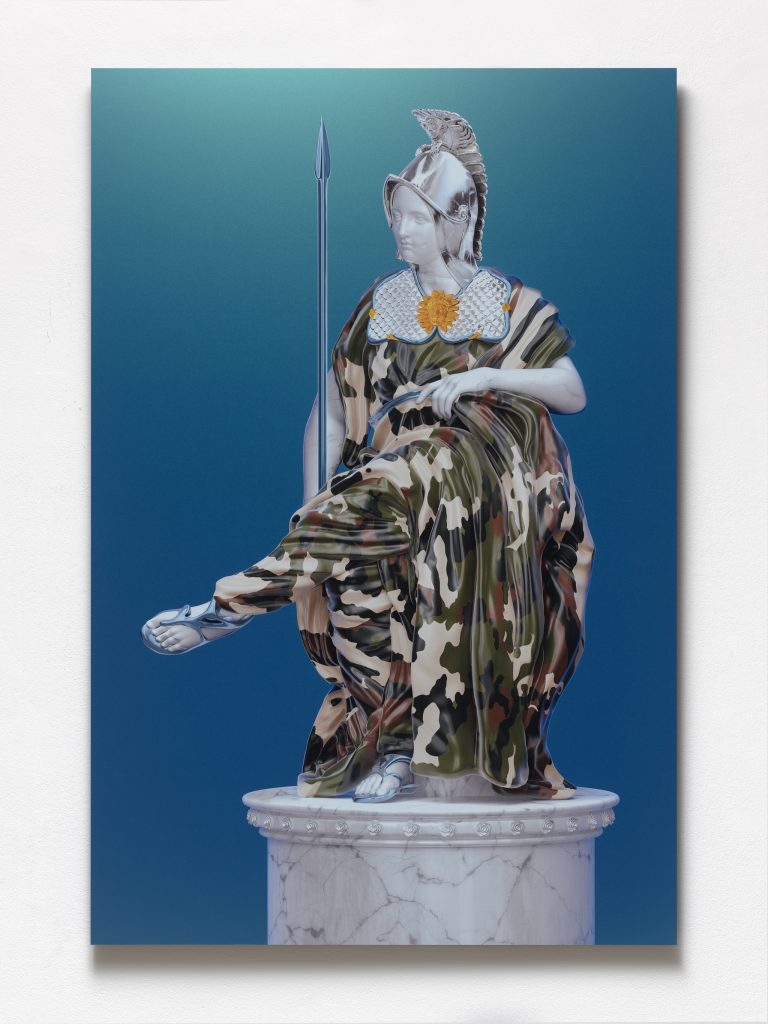 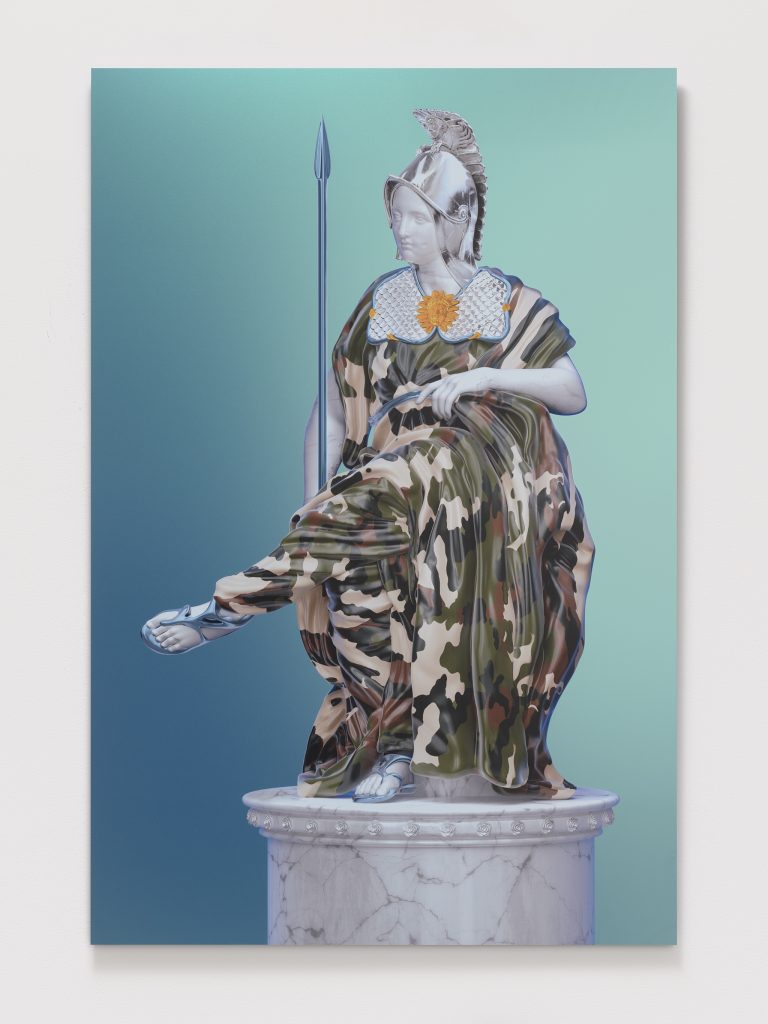 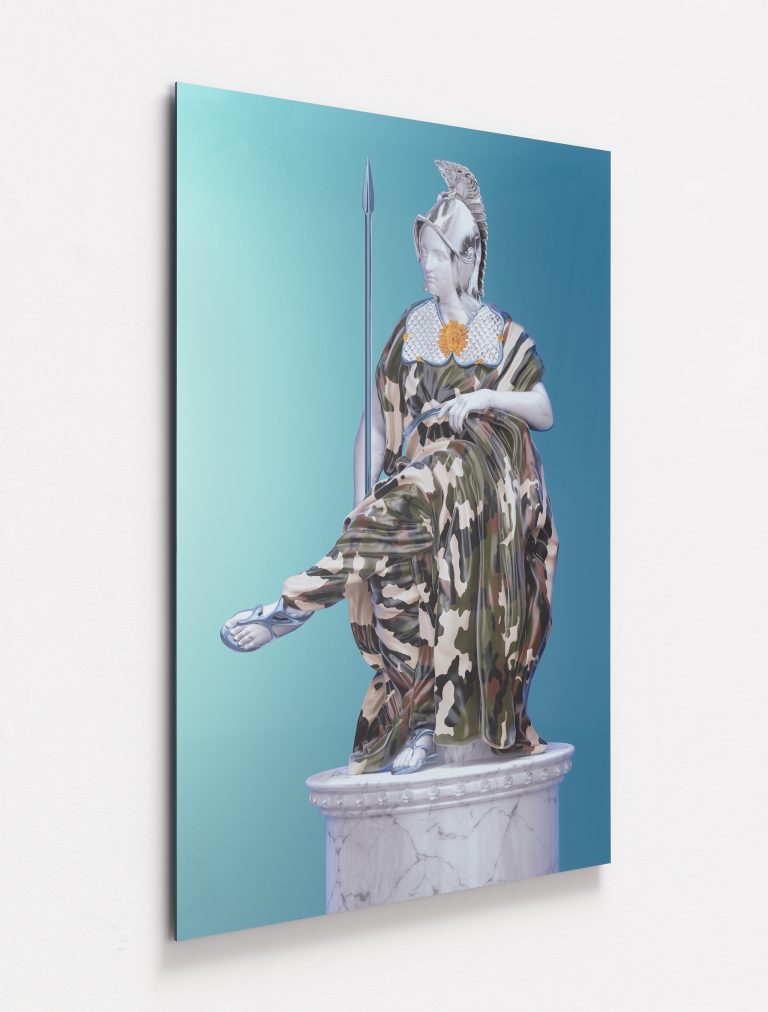 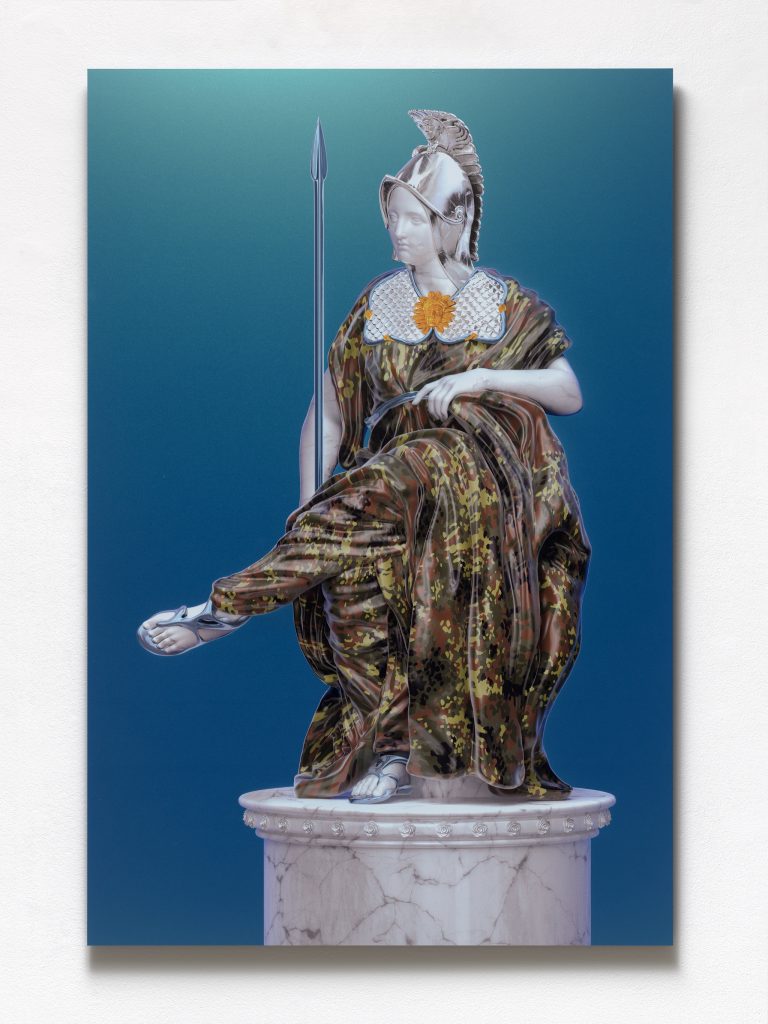 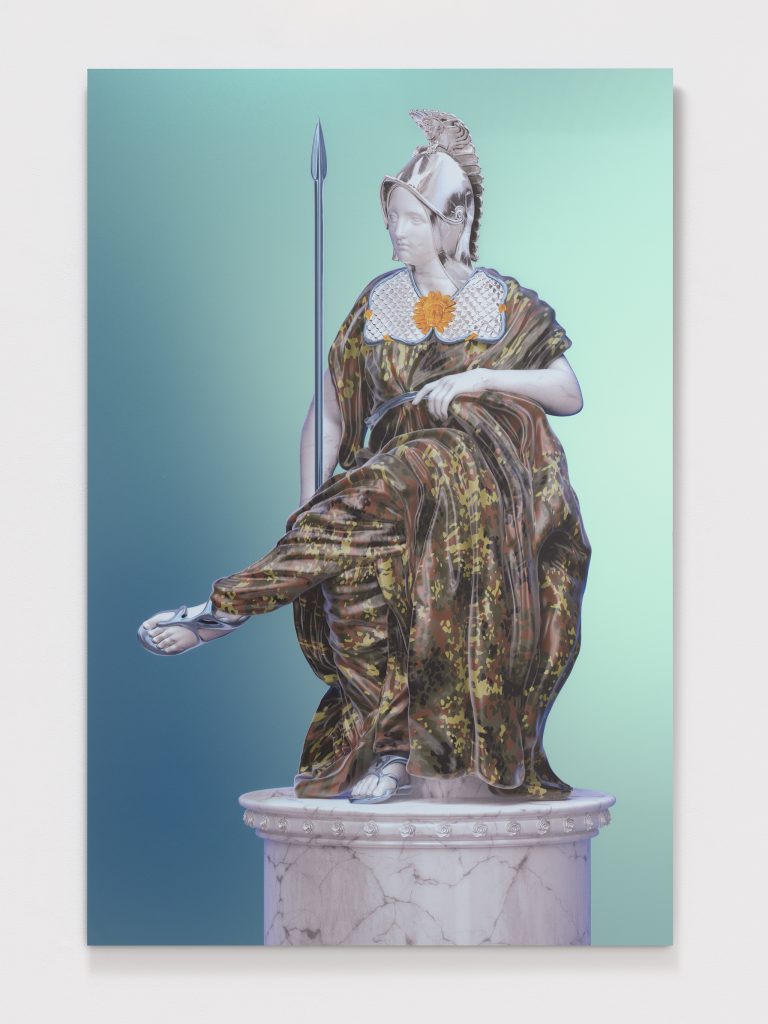 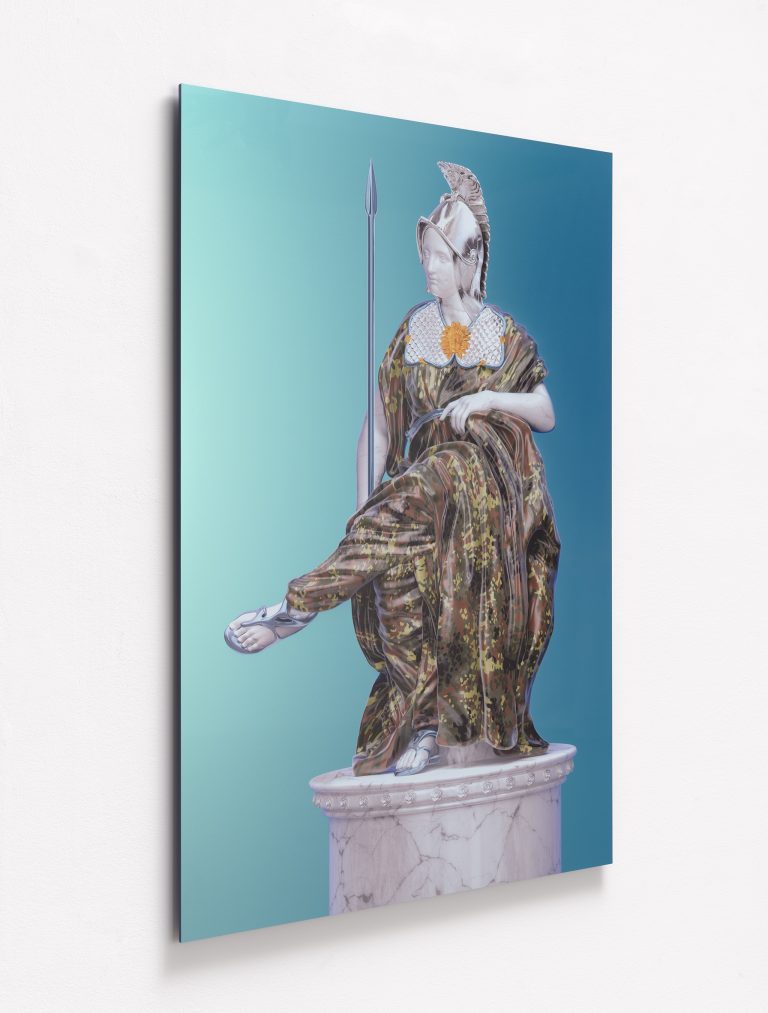 Cemile Sahin was born in Wiesbaden, Germany, in 1990. She studied Fine Arts at Central Saint Martins College of Art and Design in London and at the Universität der Künste in Berlin. The artist lives and works in Berlin.

Sahin’s debut novel TAXI was published in 2019, followed by her book ALLE HUNDE STERBEN in 2020, both of which are integral parts of her artistic practice. For TAXI Sahin was awarded the Alfred Döblin-Medaille. In 2019 she was awarded the ars viva 2020 prize for Visual Arts. The same year she was a fellow of the JUNGE AKADEMIE at the Akademie der Künste Berlin. In 2021 Sahin received the AArtist in Residence-Stipend, awarded by the German Foreign Ministry in cooperation with the LVBG, the Association of Berlin Galleries. 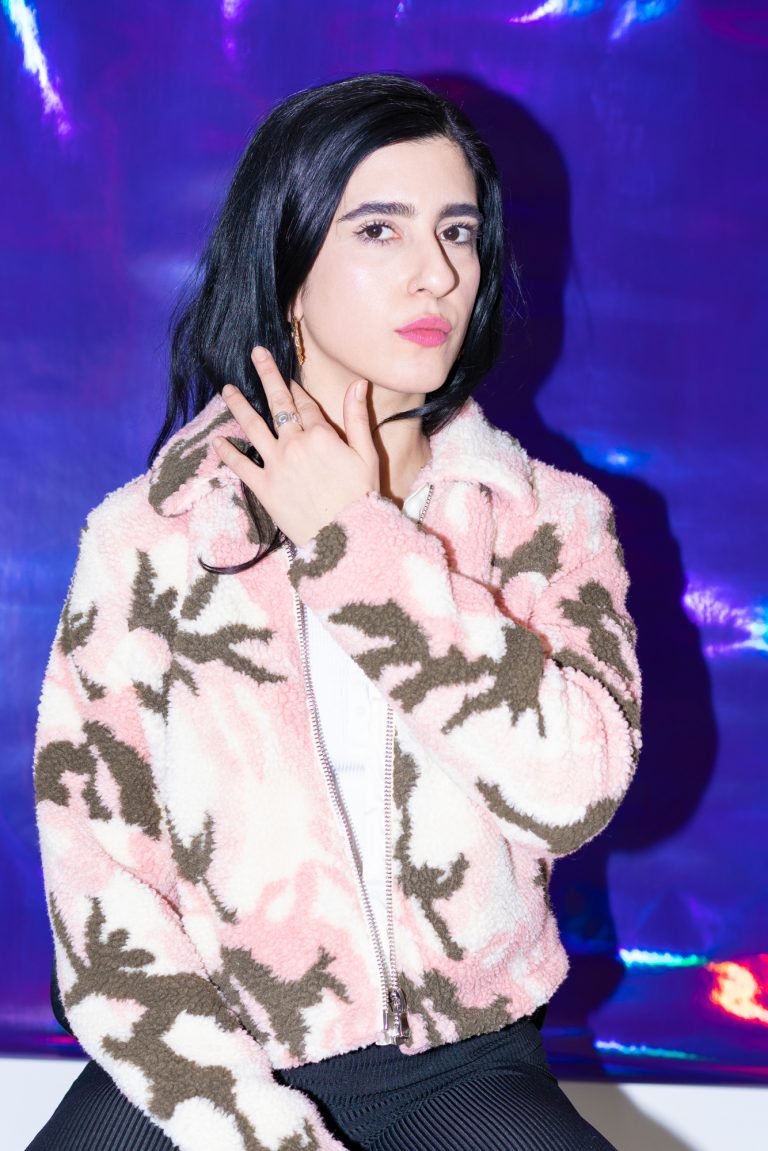 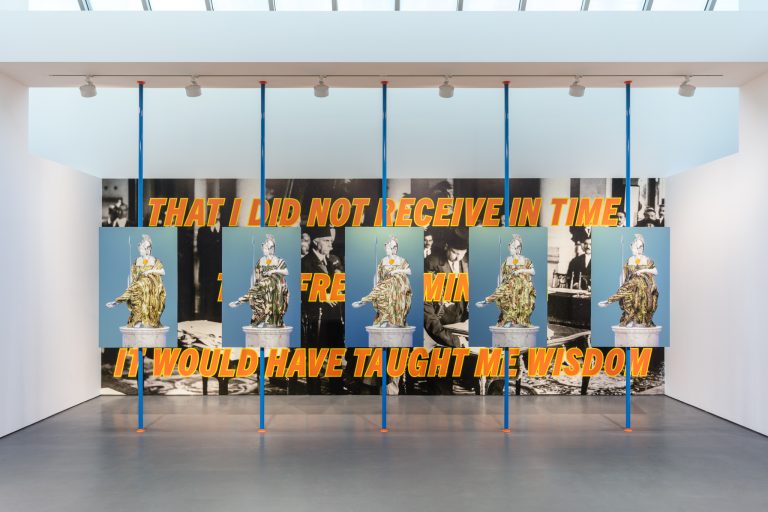 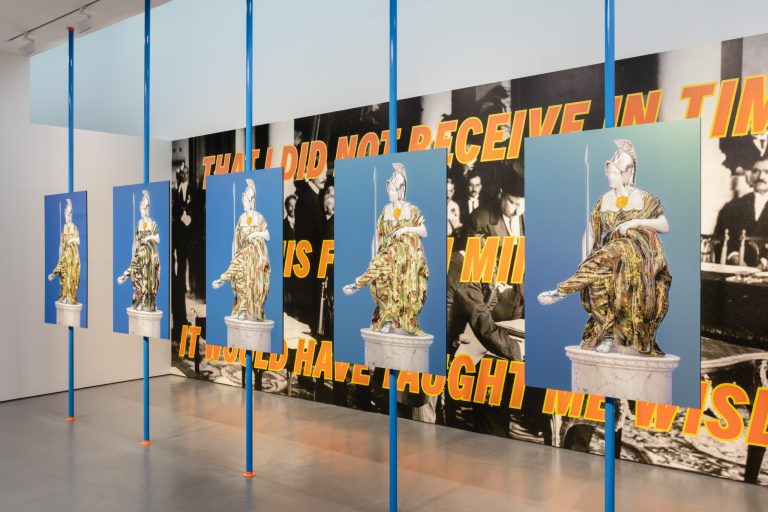 Esther Schipper is pleased to present Liu Ye’s Internationale Architektur, the artist’s first exhibition with the gallery. On view will be twelve recent paintings, created between 2017 and 2021.

Among the motifs on which the exhibited works draw are the 1925 Bauhaus building complex by architect Walter Gropius in the German town Dessau, the Rietveld-Schroeder House designed in 1924 by the Netherlandish architect Gerrit Rietveld in Utrecht, and a 1968 equestrian estate built by the Mexican modernist architect Louis Barragán. Two works from 2021 depict figures wearing the iconic costumes the German artist Oskar Schlemmer designed for his experimental Triadic Ballet in the early 1920s, while another work, Prelude, also pictures a stage-like space, this one screened almost entirely by a red curtain from behind which a figure is looking out. Also on view are works from Liu Ye’s series of book paintings, depicting pages from the 1942 edition of Karl Blossfeldt’s Wunder in der Natur and the cover of the first publication from the so-called Bauhaus Bücher, Internationale Architektur, published in 1925.

Liu Ye’s work combines both direct and oblique references to the history of art to create a charged personal iconography that draws on real and imagined works of art, fictional and reallife figures. His work is informed by a sophisticated conflation of formal principles and conceptual ideas from both Asian and Western cultures. The recurring depictions of works quoting the Dutch abstract painter Piet Mondrian evoke the history of abstraction, a topic Liu Ye has explored throughout his recent work which plays on the ambiguity of representational and abstract motifs. 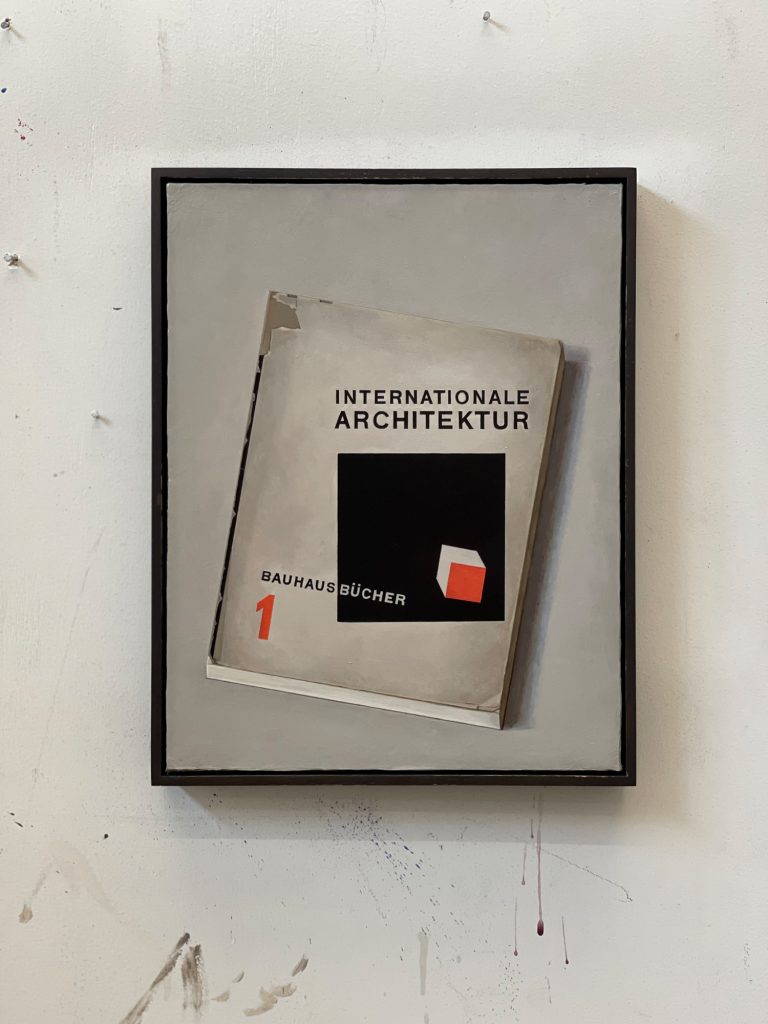 Each painting constitutes a deeply personal act. As Udo Kittelmann noted in 2018: Liu Ye’s “paintings are also a barometer of a time when the reference to the personal, the subjective, is becoming increasingly topical. And the subjective means our own lives, with all our problems big and small, the joys and fears, hopes and despairs. His pictures take us back to the origins of being and becoming human, provoking and moving us at the same time.”

Two works in reference to Oskar Schlemmer’s costume designs for his Triadic Ballet significantly expand the vocabulary of Liu Ye’s exploration of the Bauhaus curriculum. Taking Schlemmer’s famous costumes made from colorful geometric shapes as point of departure, Liu Ye imagines the figures in full color and places them in a stage setting. One depicts three faceless doll-like figures, another a single male, reading as real-life person, identified by the title as Schlemmer himself. Both scenes are framed by narrow bands of red curtains—a recurring motif in the artist’s oeuvre—complementing the impression of a stage and functioning as a framing device. With Prelude the red curtain takes center stage, almost covering the entire canvas as a lone male figure peers out at us from the shadows—“us” being the audience of a performance and the observer of the painting.

The Bauhaus is also the topic of two works from the artist’s series of book paintings that depict the first volume of the so-called Bauhaus Bücher, Internationale Architektur, published in 1925 by Walter Gropius. The book’s cover, designed by Farkás Molnar, appears slightly worn, perhaps as a tribute to the important role of the book as a cherished object of historical significance.

Three works draw on views of the façade of the 1925 Bauhaus building by Walter Gropius in Dessau and combine the artist’s interest in architecture with his ongoing preoccupation with the German school and its teachings (exported internationally long after the institutions closure due to National Socialist censure). Their geometric shapes appear almost as abstract compositions, tethered to representation by the lettering or, in one case, the fragment of the letter B. A detail of the Rietveld Schroeder House in a work entitled Mrs Schroeder exerts a similar effect: the nestled rectangles of windows, protruding balconies and handrails can be read as near abstract composition.

An architectural reference to the Mexican modernist architect Louis Barragán (1902-1988) is parred down even more dramatically: silhouetted against a bright pink wall stands a handsome bay horse. The work refers to the 1968 Cuadra San Cristóbal, a large estate with adjunct stables, the architect, who was an avid equestrian, designed. Barragán’s characteristic use of pink is all that alludes to the reference.

Book Painting Nr 22 and Book Painting Nr 29 depict book pages painted after Karl Blossfeldt’s highly influential photographs of plants. Characteristic of Liu Ye’s book paintings, it is both the haunting images of enlarged flowers by the avantgarde photographer and the beautifully printed photogravure edition of Wunder in der Natur from 1942 that we discover.

With its emphasis on found images and the muted color scheme reminiscent of vintage photography and prints, the exhibition seems to question the status of the image and its reproducibility. Painting here becomes a representation of stillness and contemplation, set outside of the rapidity of today’s digital image economy. 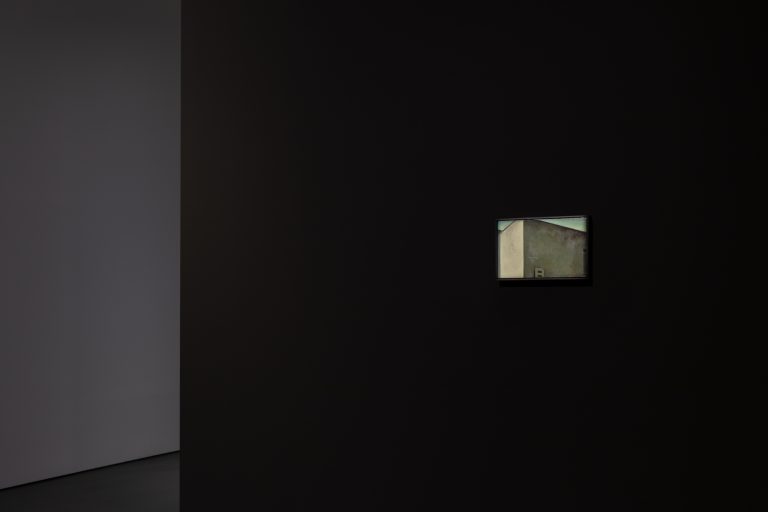