Art is the opposite of general ideas, it describes individuals, desires only the unique. It does not classify, it unclassifies. 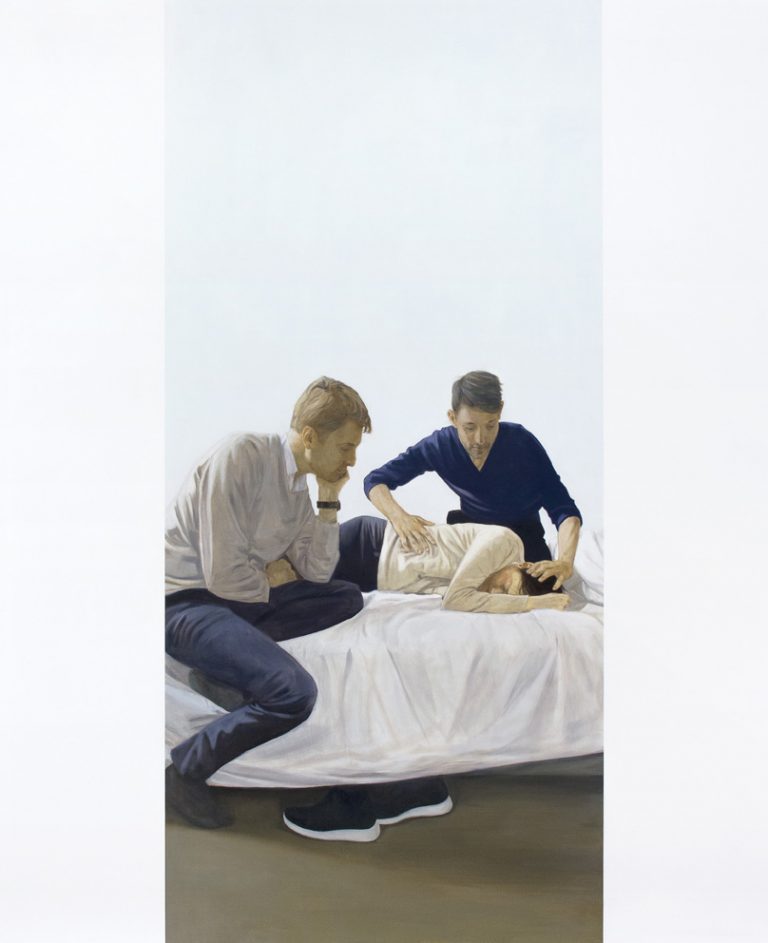 There are certain aspects in the work of Tim Eitel that return time and again: the solitude of the characters and their silence, the image framed as a disquieting illusion, or the co-existence of figuration and fields of abstraction that open up the pictorial space and grant it autonomy. The paintings often manifest a fading of the real world, comparable maybe to the films of Michelangelo Antonioni, and the emerging emptiness offers a form of introspection in which psychological tensions unwind and ease in the face of the void.

And yet this second chapter in Eitel’s collection of imaginary lives—staged three years after the first at the same gallery—achieves a marked coming-together, more in the style of Éric Rohmer, and a new proximity between protagonists. In these recent paintings, a sense of touch comes to the fore, an attention for others. A beard is being trimmed, a private physiotherapy session conducted on a bed, a neighborly couple observe us across the landing. The scenes are derived from the fabric of everyday life and at first seem perfectly innocuous. Yet the attitudes, the gestures, the glances of the figures bear witness to a concern that speaks to the sheer necessity of being together. In the heart of the pandemic, which has seen social bonds become a scarce commodity, Tim Eitel chooses to focus on everything that points implicitly to the importance of human contact. If some fields of monochrome still appear, they underline the tightening, narrowing points of view. The bands of color can be interpreted as doorways, yet they always remain on the threshold of an abstraction continuing to haunt these scenes of human interrelations.

The paintings still carry the ghostly sense of presence that has characterized Eitel’s work for years. There is the scene of a woman lying beside a dog, taking a brief nap, in which the strong visual bond between the two figures is rendered by means of the brushwork uniting the woman’s hair and the dog’s fur. Tim Eitel’s interest in these figures hovers between fiction and reality. There is an implicit element at work, an oblique way of testifying to the constant porosity between unconscious and material life. One again finds a dimension of impenetrability running through the scenes the artist composes, but this time permeated by a dream-like closeness. These days, it is certainly a question of remembering what we really hold dear. 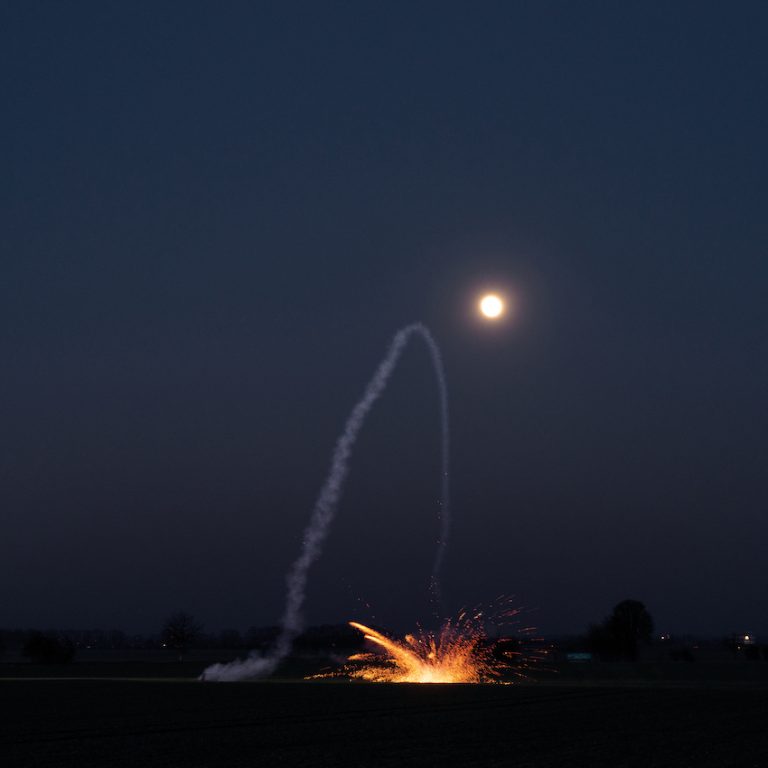 In the past there was not necessarily more tinsel, but more noise and more fire. Cars were buzzing, cigarettes were glowing, fireworks exploded. This was probably not particularly wise, healthy or sustainable, and not everything was better in the past. This much is certain. Nevertheless, this noise-making is also a way of expressing one’s joy at the mere fact that one is inexplicably alive. What happens when nothing glows any more because the e-cigarette (recently: tobacco heater) with blueberry flavor no longer burns anything crackling but only heats it moderately, when the Tesla glides silently through a frigid world and when the fireworks are consumed digitally via a screen instead of blowing up a proper bang and sulphur smell?

That these things will be reduced in the future is pleasing. Because it is reasonable and because it will ensure a cleaner and healthier future. One that leaves a better world for generations to come. Yet the silence in which the present slowly begins to mantle itself also disguises its functionalities, the present is lost in empty speculations and commodities that are decoupled from their real value. 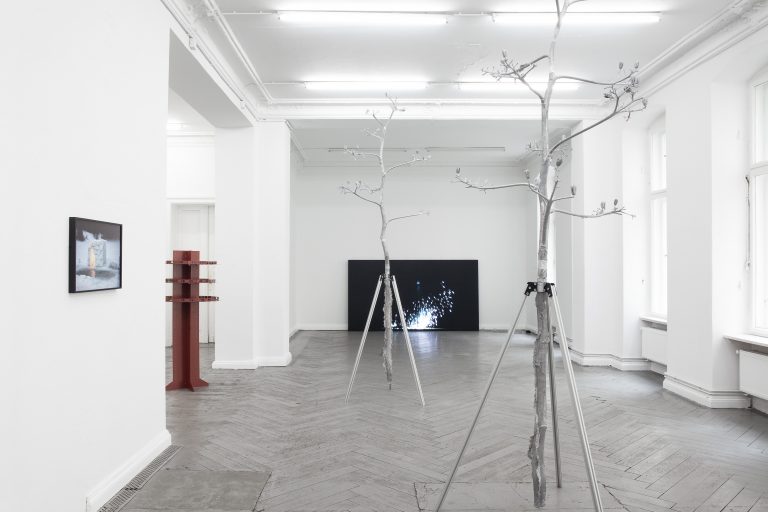 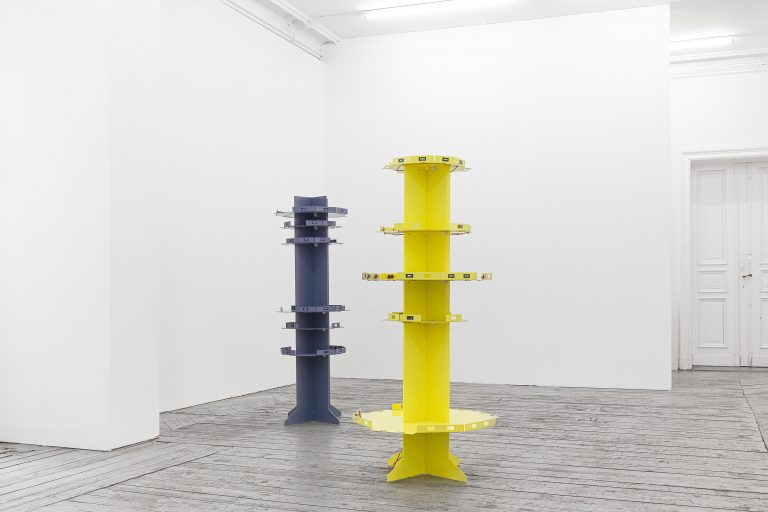 Malte Bartsch lets these two poles collide in his work. The exhibition “Investment” shows five groups of works: “Risk Averse”, “Agave”, “Rakete”, “EC” and “Schneehaus”. Does one already invest time (which is money, as we know) into ones own cultural horizon by visiting the exhibition? The neoliberal pressure for self-optimization, which eats into every area of life, is heralded here.

Standing in front of the work “Risk Averse”, which at the first glimpse look like shelves, and looking at the somewhat stupidly functionless flashing display, the viewer may comprehend the total void of these commodity circuits, to which humans have long since lost every contact.

People invest and speculate in matters that are often nothing more than a mere game of thought or chance. We witness a present that has evolved from networked into entangled and in which we have lost the overview. Numbers fade into insignificance.

However, the small displays are controlled by an invisible force and display numbers like encrypted messages that can no longer be deciphered. The shelves look like oil derricks or architectural models of cities in a dystopian future. Whether these forms were made for or by humans at all remains vague.

In between, two agave trunks cast in aluminium emerge fragile and delicate. They look like two aliens in silvery suits on an earth mission. The industrial material, made from discarded aluminium rims, imitates nature in order to rejoin something other than the circuit of recyclable materials. In nature, the large graceful plants are growing for decades before they form a single flower stem. They, too, invest. But not in sustainability or in self-optimization, but in complete, self-abandoning expenditure: a single blossom. An economic nightmare. The agave traditionally grows in Mexico, Central America and Panama. Not only does it encapsulate the longing for a vulnerable body, but also the longing for faraway places, for people’s wanderlust, which on the one hand destroys the planet and on the other hand brings it closer together. The insuperable contradiction that one has to endure when acting globally. Human needs nature and yet consistently destroys it. And somewhere between the self-optimizing search for meaning and turbo-capitalism, the antennae for beauty and transience have been lost. Both flare up again in a well-dosed manner in Malte Bartsch’s works. Different temperatures often collide, as in the work “Snow House”. What happens when heat meets cold and then heat again? He examines the different aggregate states in which our world moves. In the photograph, you see a small house made of ice on a frozen lake, in which a fire is blazing, slowly melting the shelter. The melting and freezing. The softening and hardening. Opposites that are not only becoming more extreme as weather phenomena and that can also always be read as social states of mind.

In the video “Rakete”, Bartsch has tied ten fireworks to a rubber band. In the middle of their flight into the night sky, the rockets are pulled back and their fireworks pour back down to earth. There is something melancholically dreamy about this, in which there is so much diffuse beauty that may only be seen in a swan song of a world that, as soon as you think you have understood it, vanishes again.

A warming fire blazes in the ATM “EC”. It has retreated to a place that could not be further from the traditional campfire and for this very reason is in no way inferior to it in its symbolism. The ATM, once a symbol of progress, has itself become a relic of a bygone era in times of contactless payment and the retreat of cash. How does the meeting of man and machine – past and future – warm and cold – work? You won’t find any answers here – but ideas, food for thought and mind games. To unravel a confusing present, at least for a little moment. 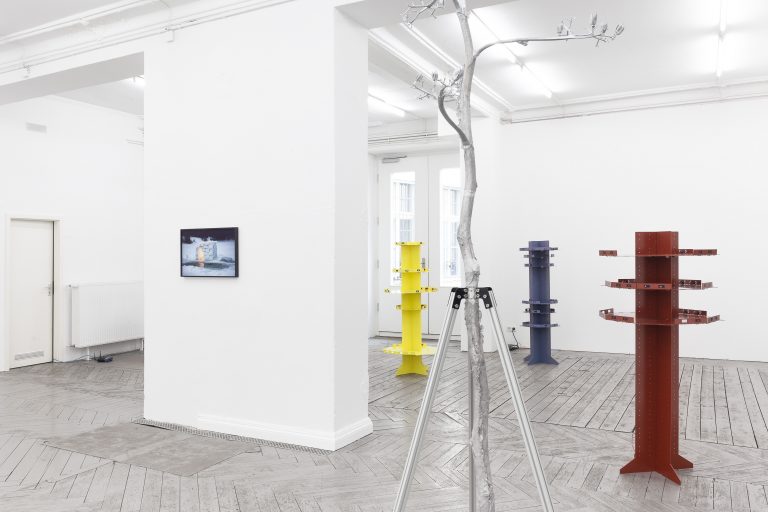 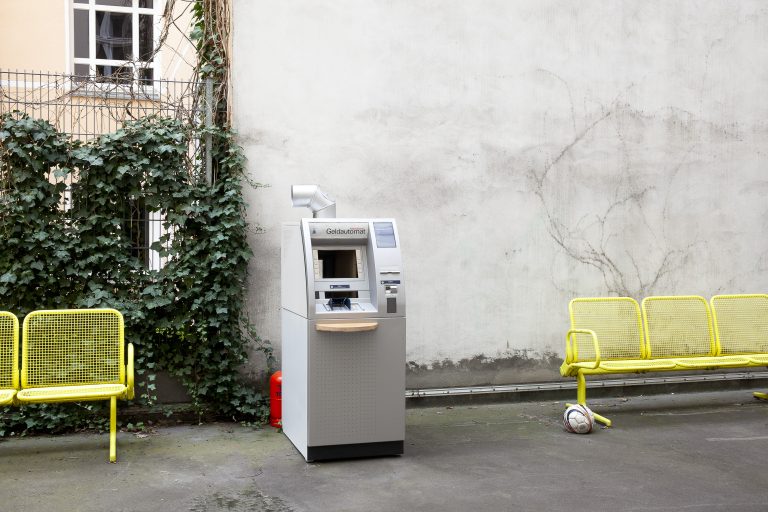