Linda Peitz: In the exhibition you are showing your series “Economic Popes” for the first time in its preliminary entirety. How did you come to deal with these characters and what role does the system they form play?

Lea Draeger: Based on family biographical material, the Economic Popes emerged from my preoccupation with Catholicism and above all with hierarchically shaped societies and family structures. The pope as such is an excellent symbol for a patriarchal figure. My drawings are not portraits of actual and historical popes. They are the faces and figures of popes as institutional bodies in possible and impossible roles and situations – the blessing pope, the Medusa pope, the praying, the evil, the germ pope, the comrade pope, the intestinal spit pope, the Trinity Pope, the sponsors Pope, Oh come little children Pope. I see my papal system as a laboratory. It examines power relations and structures, manipulates their insignia, plays with categories and identities and at the same time undermines them.

In the beginning there were the popes, only later did female popes find their way into your laboratory.

The female popes appeared quite quickly, certainly as a necessary consequence of the initial pope-only system. The first female pope in it was actually Pope Joan, who according to a myth is said to have officiated in the 11th century. This was followed by Pope Clara Zetkin, Pope Sissi, etc. In addition to these historical role models, the female popes initially played through common role models for women, but soon began to resist them and finally broke away from them entirely. The same happened with the popes, who also began to break with established gender categories and classifications. 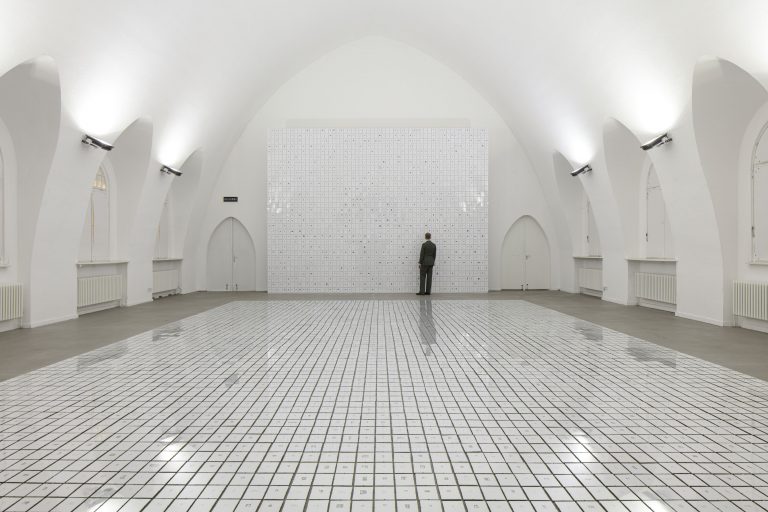 Why is the series called “Economic Popes”?

On the one hand, the title alludes to the word similarity to ecumenism, on the other hand to the economic aspect of a system. And at the same time, the popes are actually based on an economic way of working. It is frugal, with well thought-out resources and has developed in this way for very pragmatic reasons. When the popes were first created, I traveled a lot and because of their small size, the drawings could be made anywhere, on the train, between appointments, in the restaurant or in the hotel room. The material expenditure with paper, pen and a simple frame is also low. 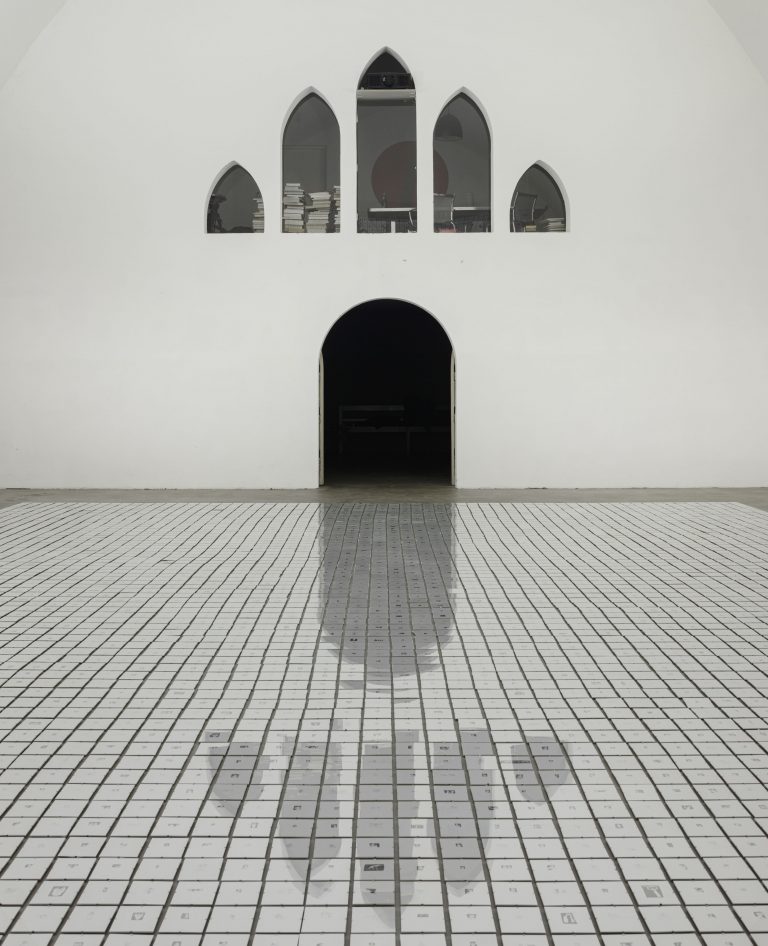 In view of the mass of drawings, the idea of ​​economizing seems absurd today. There are now well over 6,000 popes. How has the handling of the works changed over time?

In the beginning it was the “1000 economic popes”. Each pope stands individually as a drawing and has his or her own value, but at the same time, in their plurality, they form set pieces for me that can be combined to create new works. Depending on the place, depending on the space, I arrange popes into different tensions and formations. In their entirety, they also function as an object in space, which, due to their mass, only reveals the individual figures, themes and positions on closer inspection. Only a part of the individual building blocks is visible, many are swallowed up by the violence of the whole. I am also interested in this tension between the finely drawn drawing and the resulting sculpture in its polyphony.

How can one imagine the exact creation process of the drawings?

The production path is clearly structured and process-oriented, the themes follow the passage of time, are unpredictable, versatile and inexhaustible. Daily politics as well as my priorities, interests, thoughts and questions on certain topics flow into the drawings, sometimes they even serve as a diary. Sometimes the title of the specific drawing is present in my mind, sometimes it’s the other way around and the name follows the drawing. As far as the specific technique is concerned: I draw with a ballpoint pen on transparent paper, usually a scene made up of several figures. I then cut out one or more portraits or scenes the size of postage stamps, which I then stick onto postcards. This postcard gets a clip frame, the back of which is provided with the respective title. The process is always the same in sequence. For me, the whole thing also has something performative about it, practicing and continuing a ritual.

Each drawing has a title, they are called, for example, “Prominence Pope”, “Three Graces Pope”, “Peshmerga Pope” or “Prague Spring Pope”. What role do these additional categories and identities play?

Sometimes the titles match what is shown, sometimes not at all. I am interested in how the perception of the picture changes when the title is added. Since I write them on the back, the image and title are always perceived with a time delay and then put together afterwards. At the same time, I also see the titles as a kind of dialogue. If you hang many popes next to each other, an extensive, intensive dialogue develops over the titles. This dialogue can be increased by the constant addition of new characters, it is both against and with each other speaking. 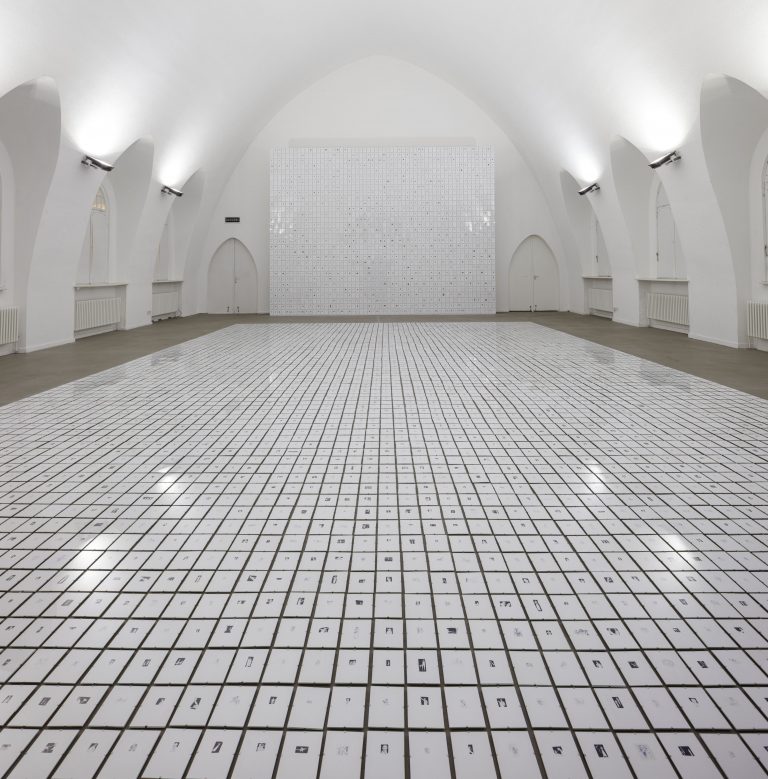 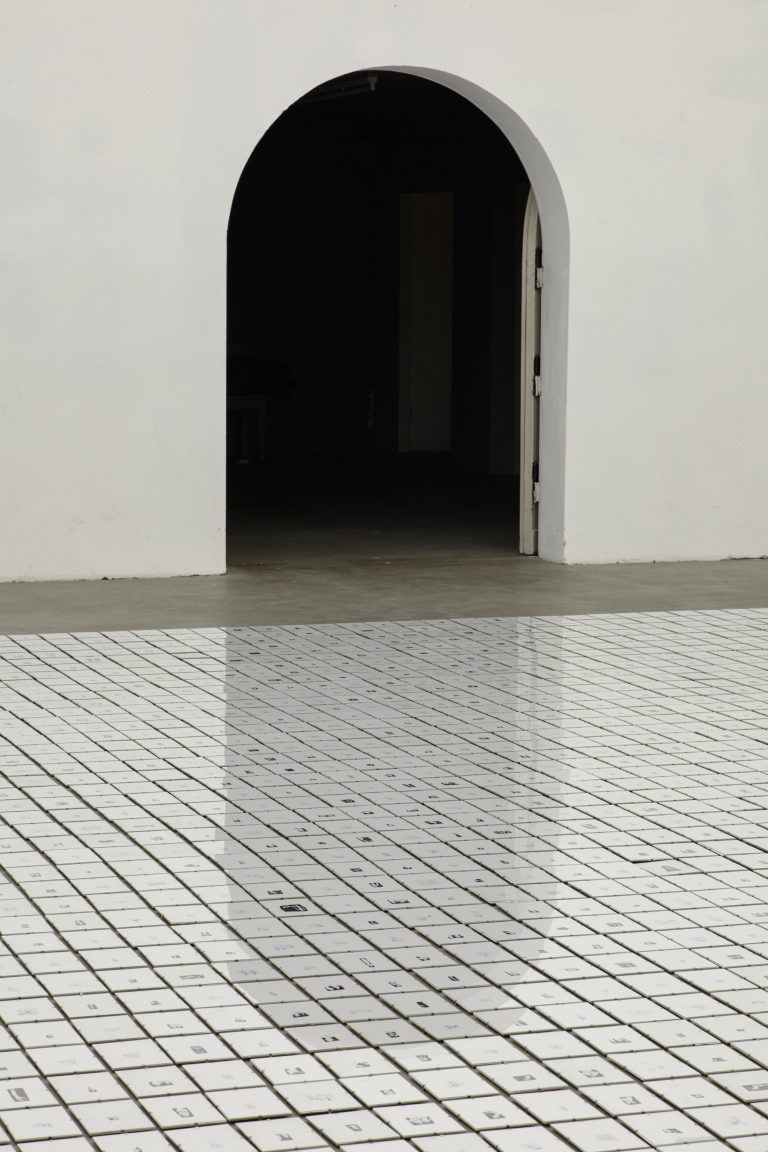 Forerunners of your drawings are the artist books “Catholic Bus to Lourdes”, “Magdalena’s Old Aunt Maria”, “Jesus in the Nursing Home” and “Mother Magda Martyr”. In January your novel „Wenn ich dich verraten könnte“ [If I could betray you] was published by hanserblau of the Hanser literary publishers. How important is the connection between writing and drawing for you?

For me, writing and drawing go hand in hand, which is most evident in the artists’ books as they combine drawing and text. In the drawings of the popes, this is reflected, among other things, in the importance of the titles. When placed opposite each other, image and word can undermine their respective level of meaning, but they can also complement and stimulate one another. My writing is very pictorial, my drawings very concrete. My first novel eventually developed from my artist books. It tells a family story spanning three generations, the central theme of which is silence. The granddaughter in the story breaks this silence with words. She confronts her family past, which was shaped by patriarchal violence, and begins to write about it and against it. In fact, up to that point, the grandfather, who was a writer, had written the history of women. For me, writing and drawing are a kind of self-empowerment about myself as a woman and about my story. They are my language.

At the same time as your exhibition, an exhibition about the Viennese actionist Otto Muehl is taking place in the basement of the gallery. The artist was accused of an authoritarian and hierarchical organization of his commune at Friedrichshof. In the early 1990s he was sentenced to seven years in prison for, among other things, abusing minors. How do you and your work react to this?

It is clear to me that I have to take a position on this. Independently of Muehl, both my drawings and my novel deal with abuse, oppression, exploitation, patriarchal structures and hierarchies as well as the concealment of things. So I think you inevitably relate them to these concrete events. In addition, I have decided to change the focus of some of my figures in preparation for this exhibition. This is reflected above all in my choice of pope titles for the sound work in the anteroom of the installation. On the one hand, there are more and more popes whose titles depict violence and abuse, and on the other, fighting and assertive female popes. In the entirety of the series of drawings, as they exist to this day and are now on display here, the popes are more polyphonic and appear in all possible shades. It’s interesting to note that over time, the characters in my lab have largely liberated themselves from a dualistic worldview. They have created a system that continues to shed light on patriarchal and hierarchical structures, but also turns the power of interpretative sovereignty and categorization upside down and creates space for utopias in which these abuses of power are overcome. 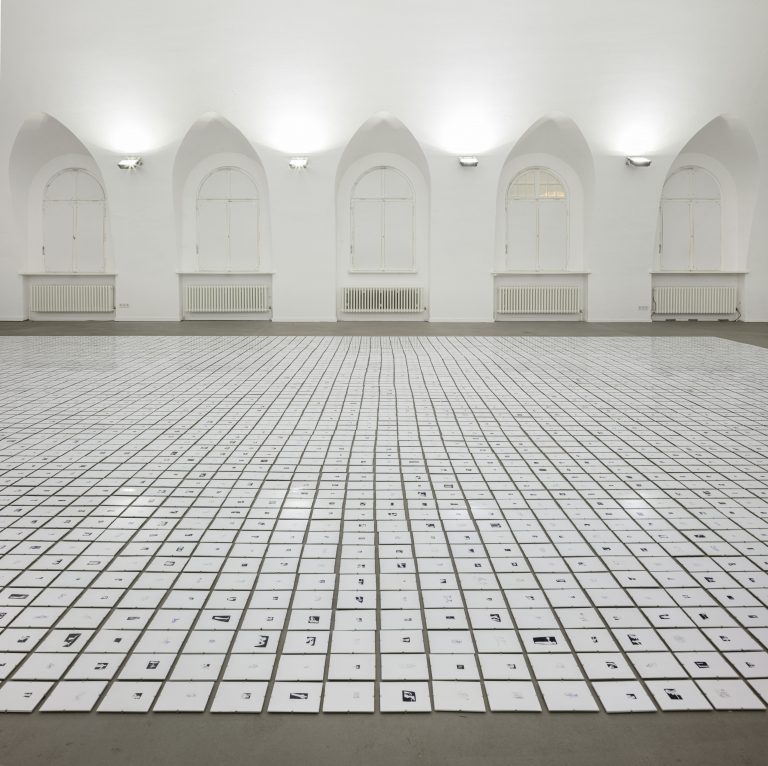