Childhood memories are recollected and approached from a distanced, queer perspective. Ultimately, they are forced into a symbiosis with present-day objects representing a cult of ordering online, such as zombie knives or steel butt plugs. The artist’s feelings, affections, desires and even secrets are on display for everyone to see. 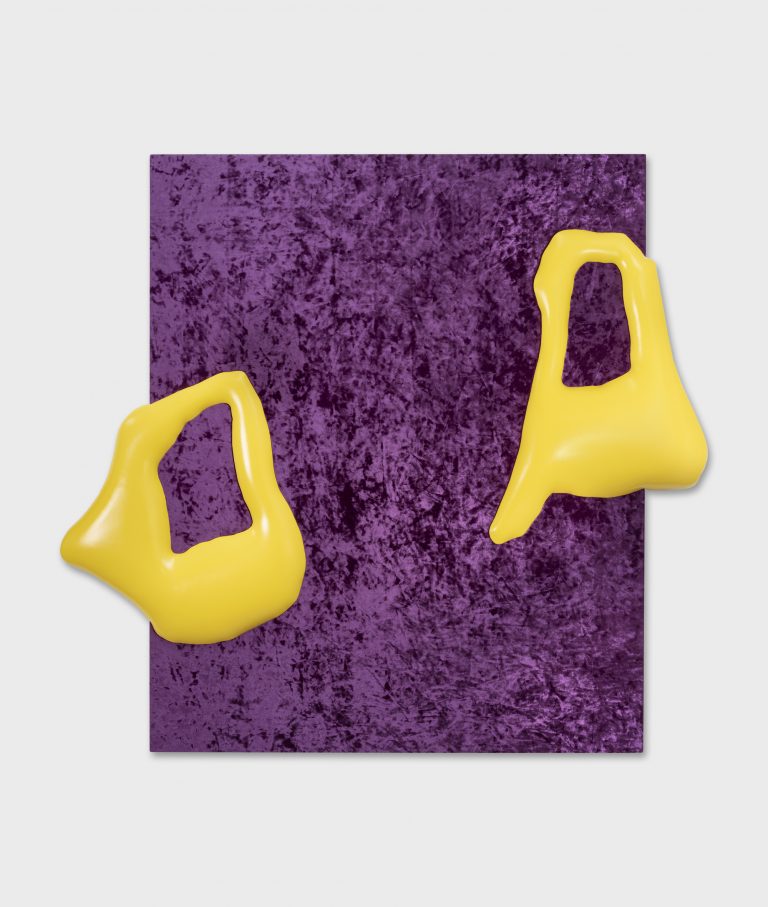 DITTRICH & SCHLECHTRIEM is pleased to announce the first solo show in Berlin of Thomas Liu Le Lann, opening on the occasion of Gallery Weekend Berlin, April 29– May 2, 2021, which at the moment will take place only online.

Titled MILO, the exhibition consists of multi-material fabric paintings, sculptural installations, poetic texts, and a new series of sculptural and figurative forms termed Soft Heroes that aim to disturb and liberate perspectives on social normative ideologies through a pronounced yet “soft” attitude of ambivalence.

“Milo” is the name of a boy Thomas met in Vienna, fell in love with. At the time, he promised him to call his next exhibition Milo, and that’s the show that is opening today. 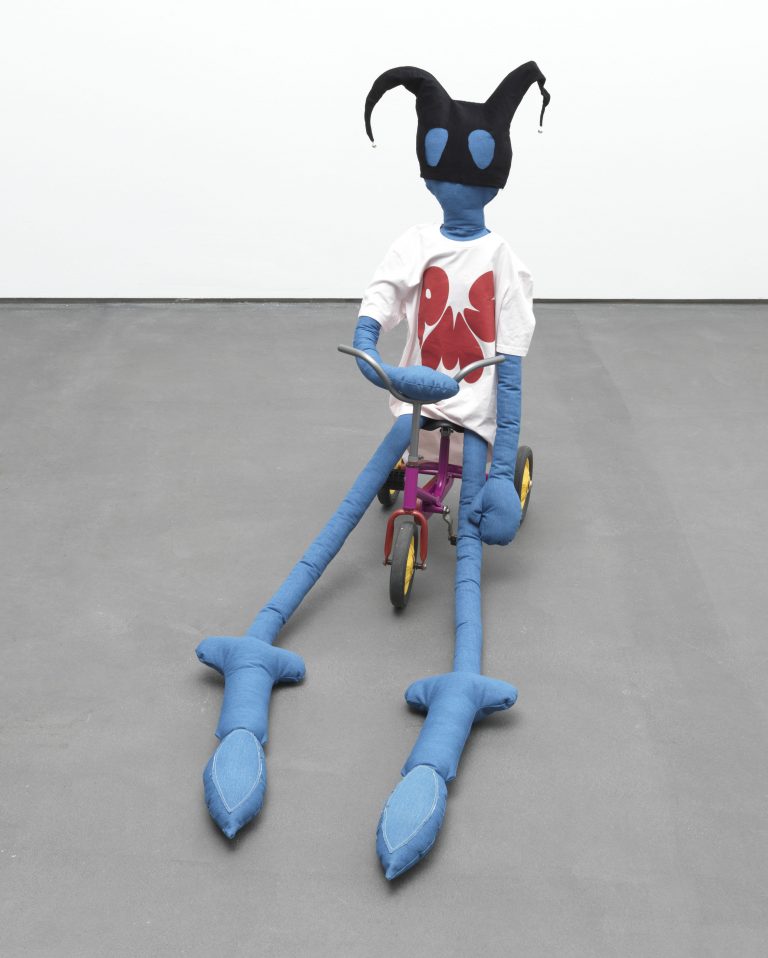 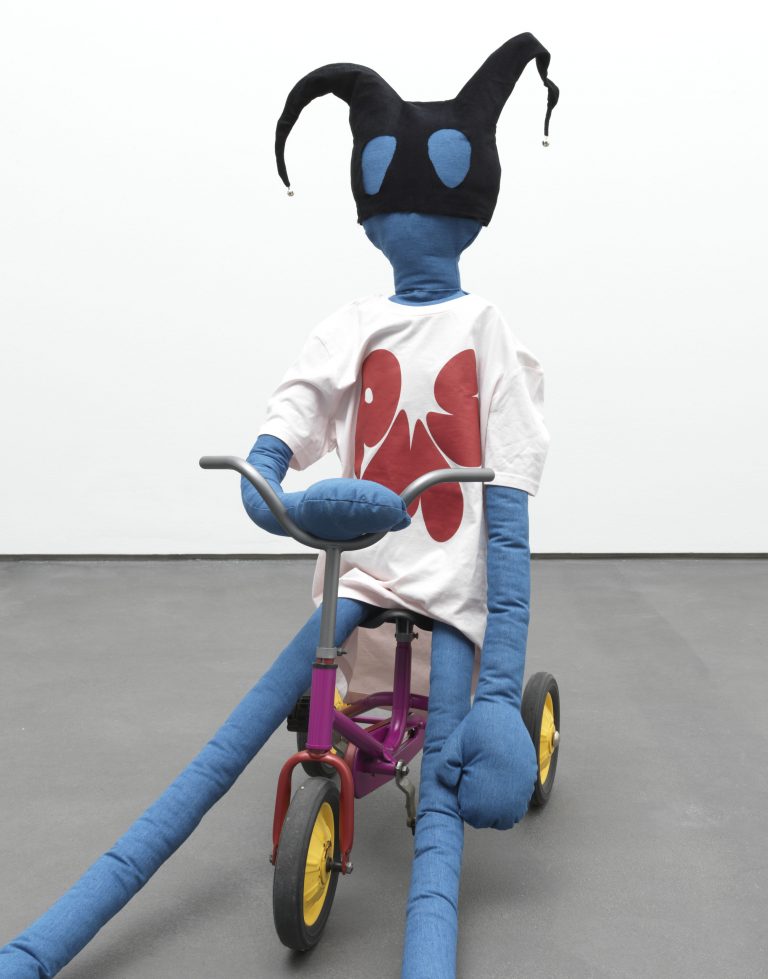 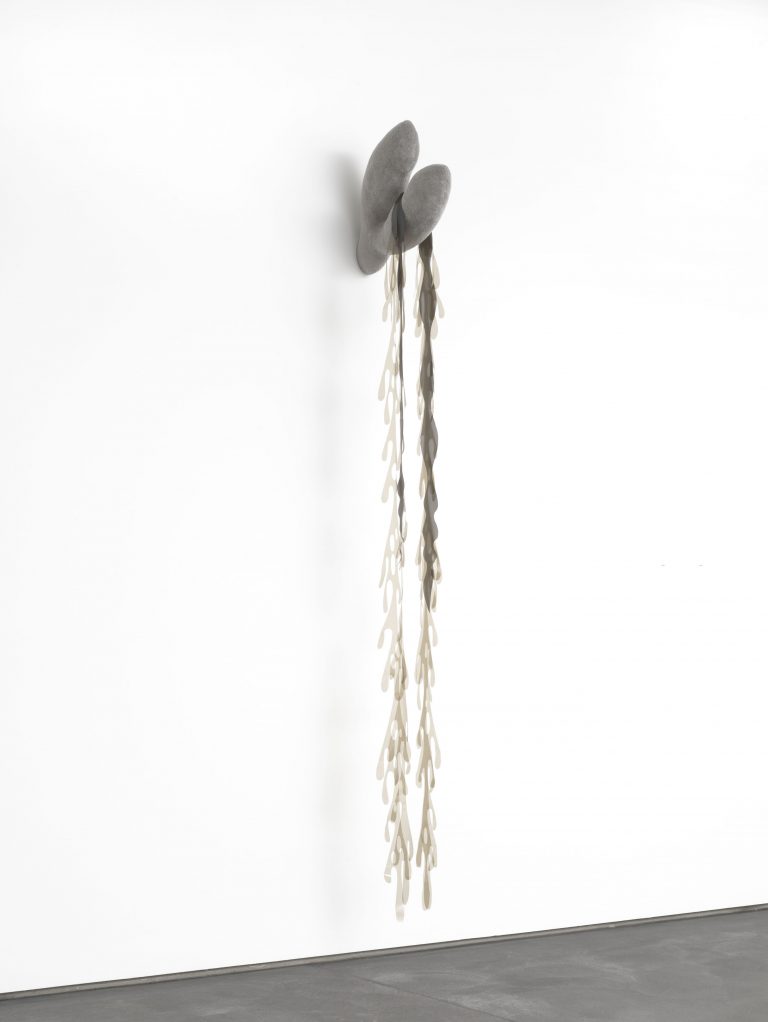 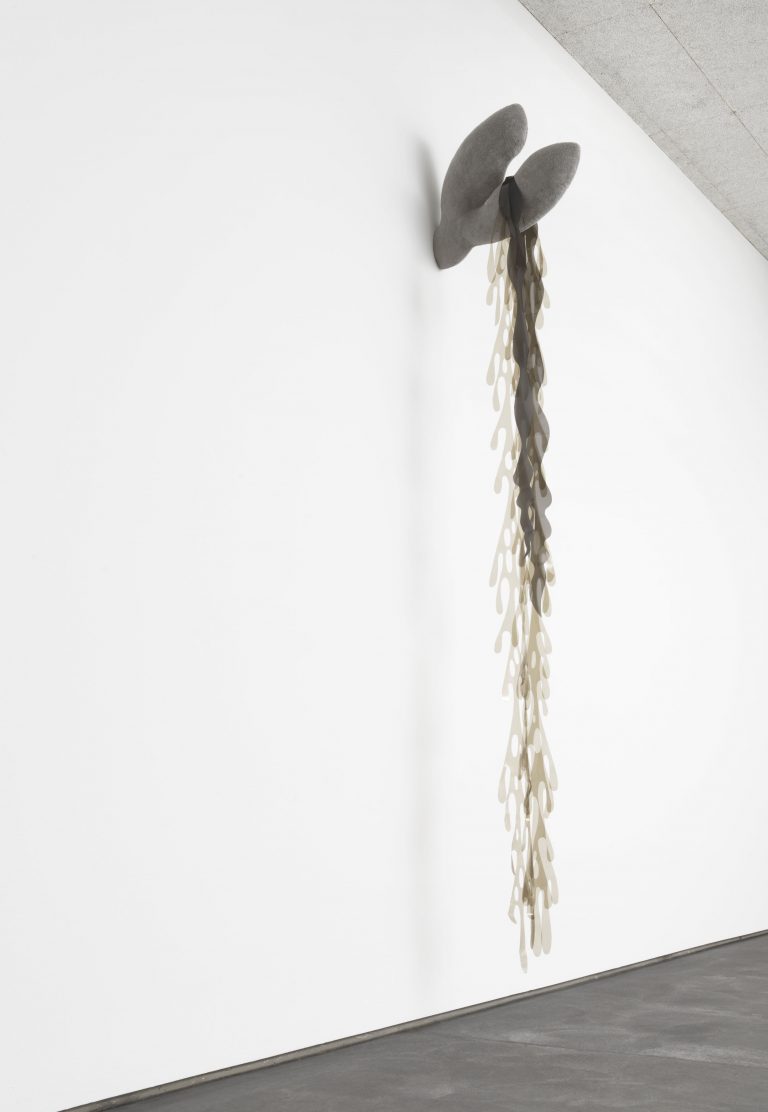 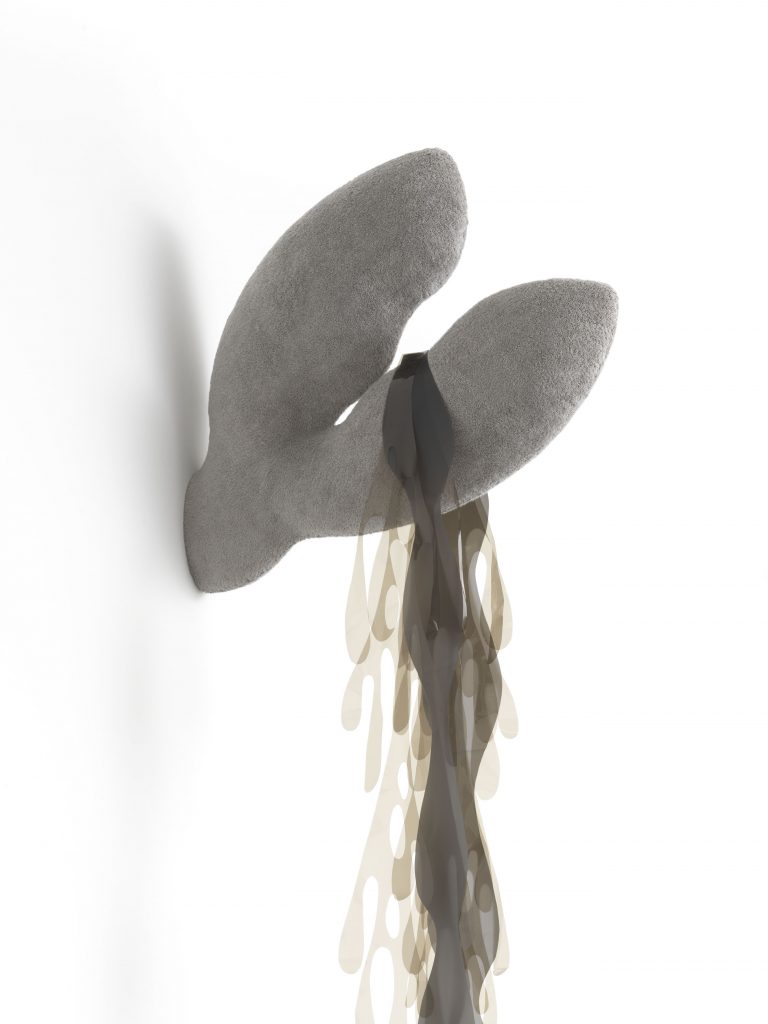 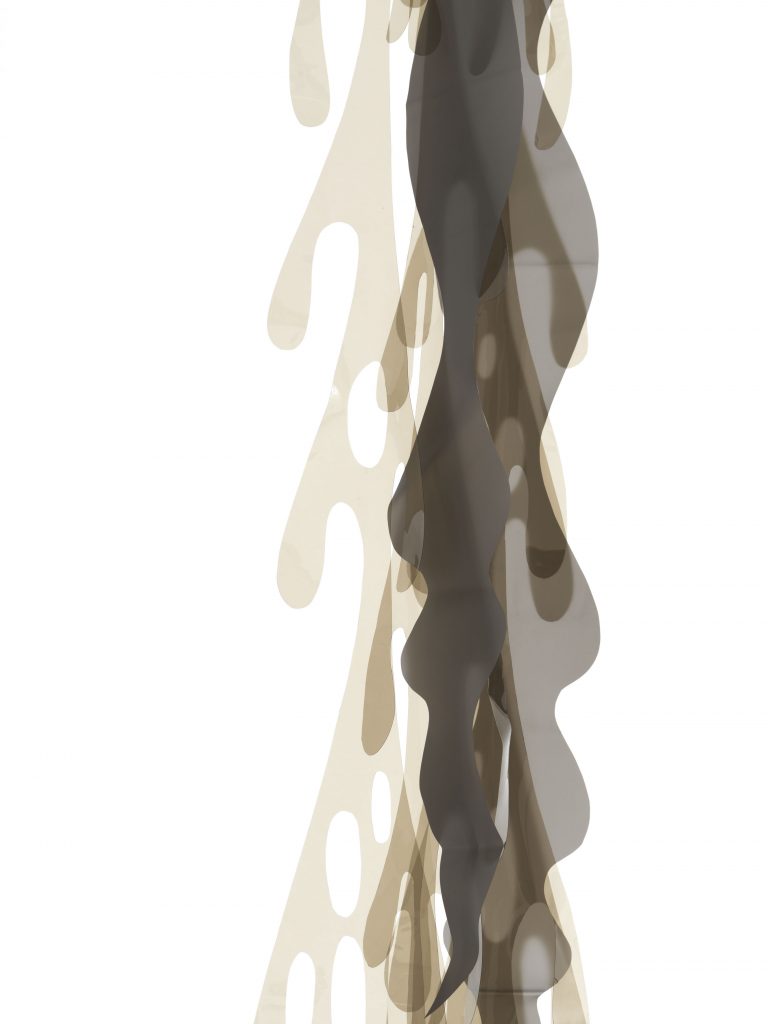 In this show, there are fifteen new pieces. Seven of them form a round: Milo and friends. Thomas has a sense of community. It is a farandole of tricycles that the ordeal of confinement has not allowed to be patched up. No matter, the basis of his work is collaborative and he has given them to a bike specialist to repair. These tricycles are ridden by seven queerdos, Pee-wee Hermans trained in a round, ready to cross the country on three wheels for a vanilla milkshake or a bubble-tea. If motorsports, sliding or speed sports suffer from a testosterone footprint, his tricycles would be their campy counterparts, props for little Ponies, fashion-sports equipment for those from Faggotland. They are topped by soft, faded figures, e-boys reading Dazed and Confused, listening to Hannah Diamond and mixing tartan, rainbow gaiters, shiny coverings. They are Milo’s friends, little Monsters from Vienna that wear make-up that’s gone bad. They are dressed with T-shirts with the initials PMS standing for Premenstrual Syndrome realized by the artist Marlie Mul. It is haunted-couture. Their feet are blistered from drinking tea and eating gelatin. They are flabby, shabby. More like Lynda Benglis sculpture-larvae than Robert Morris macho- rugged devices. They are humans-velocipedes escaped from a provincial Pride, led by Thomas Liu Le Lann under the influence of fairies and Minnie-mousses from Claes Oldenburg. 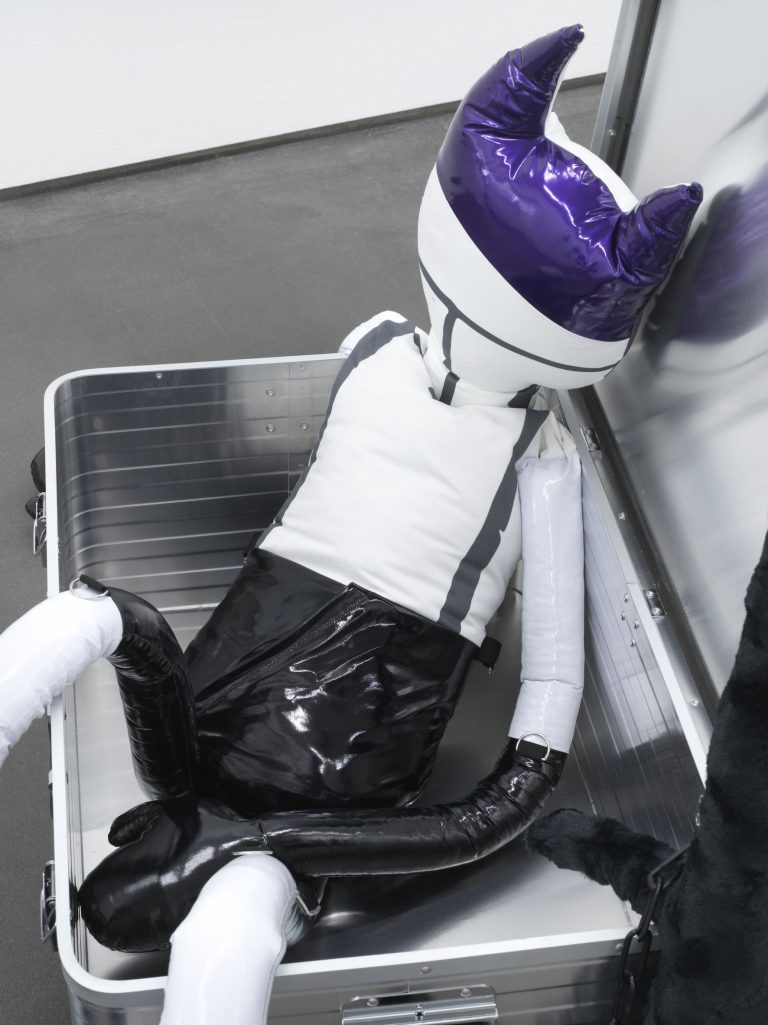 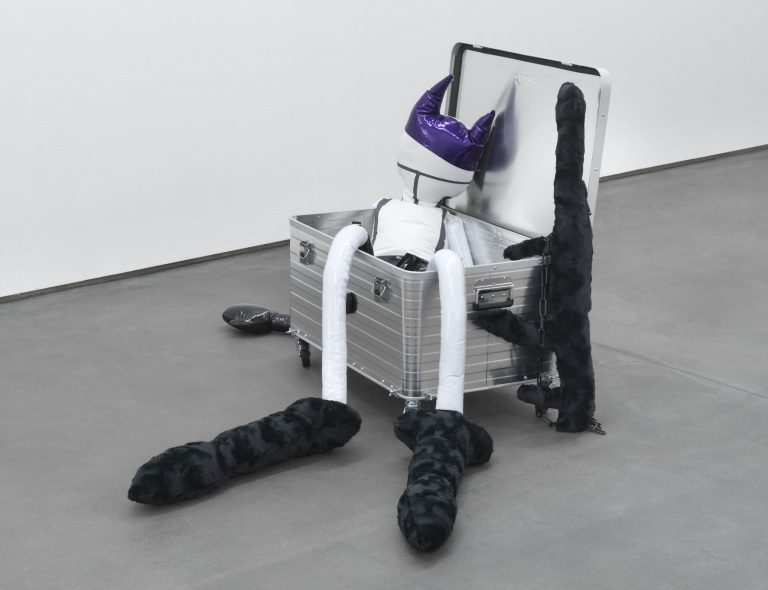 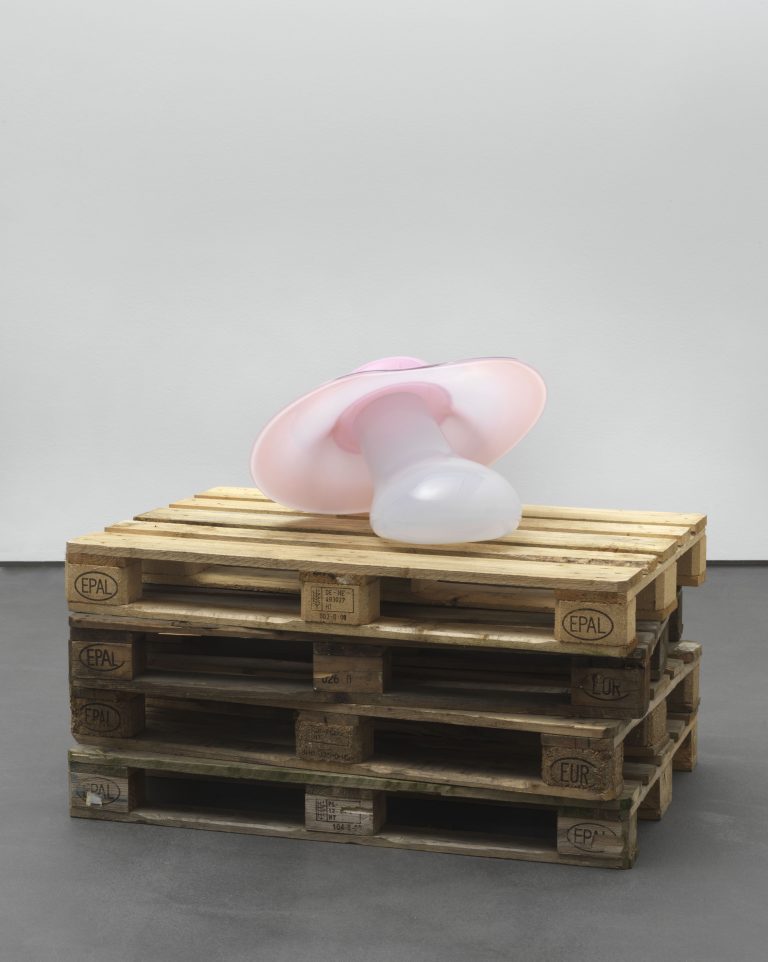 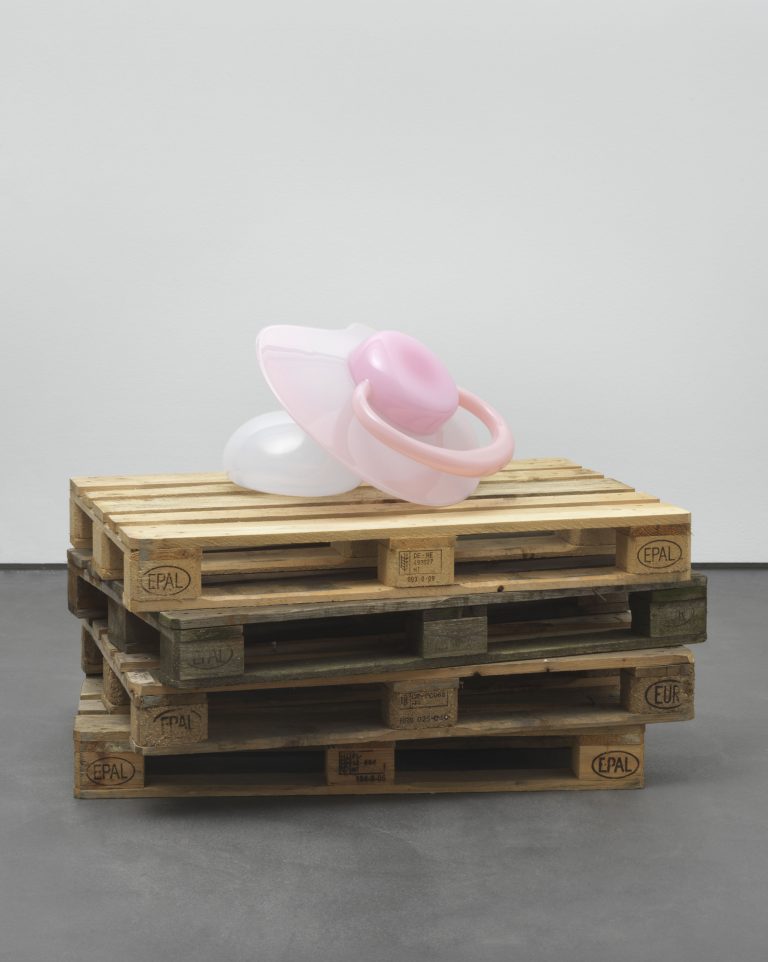 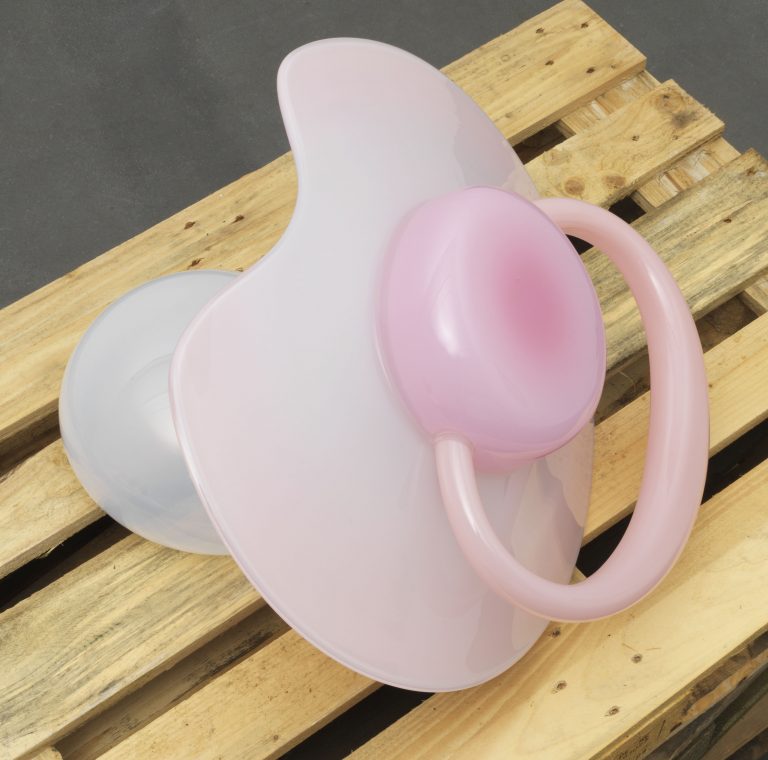 Thomas likes dummies. In fact, there is one. Training Part 3 is a large baby-pink blown-glass dug made in Vincent Breed’s workshop. It is a palliative object, a learning method for baby teeth but in this case slightly more dangerous. When we see it we think about his appetite for pink, soft and ductile candies. Thomas likes sweet Tagada and Antonin Carême’s cream pastries. They remind him of the founding act of the Virgin Mary feeding her child, or the She-wolf of the Rome Capitol giving milk to Remus and Romulus. Moreover, during his previous stay in Rome—between two visits to the gay bar Incognito—Liu Le Lann was obsessed with the lactation of Saint Bernard. The teat is fragile and is placed on a base of wooden pallets. The wood is dry and absorbs the excretions of the salivary glands. It is a delicate sensation between delight and misery.

A shellfish claw covered in grey bath towels—probably stolen during one of his visits to the Beau Rivage Palace in Lausanne—holds a bunch of seaweed. It’s a re- reading of a funeral wreath. They are underwater Armani Chrysanthemum. When you see them, you think of Cosima von Bonin, but you can also slip further away. Perhaps this clip is dedicated to the artistic director Howard Ashman. He was a Broadway man behind the Disney Studios revival in the late 1980s. The creator of the crypto-queer film “The Little Mermaid” and its fantabulous lobster Sebastian, he died of AIDS in 1991 and was relegated to the studio‘s dustbin. Soft Heroes are too often forgotten.

The above is an excerpt from the essay contributed by Pierre-Alexandre Mateos and Charles Teyssou for the exhibition catalogue, which will be available at the gallery in May 2021.

The gallery exhibition and video content can be viewed via the following QR code. The show opens online as scheduled. Please visit our website for continued updates on the pertinent regulations. We look forward to welcoming you to the exhibition when regulations are revised. 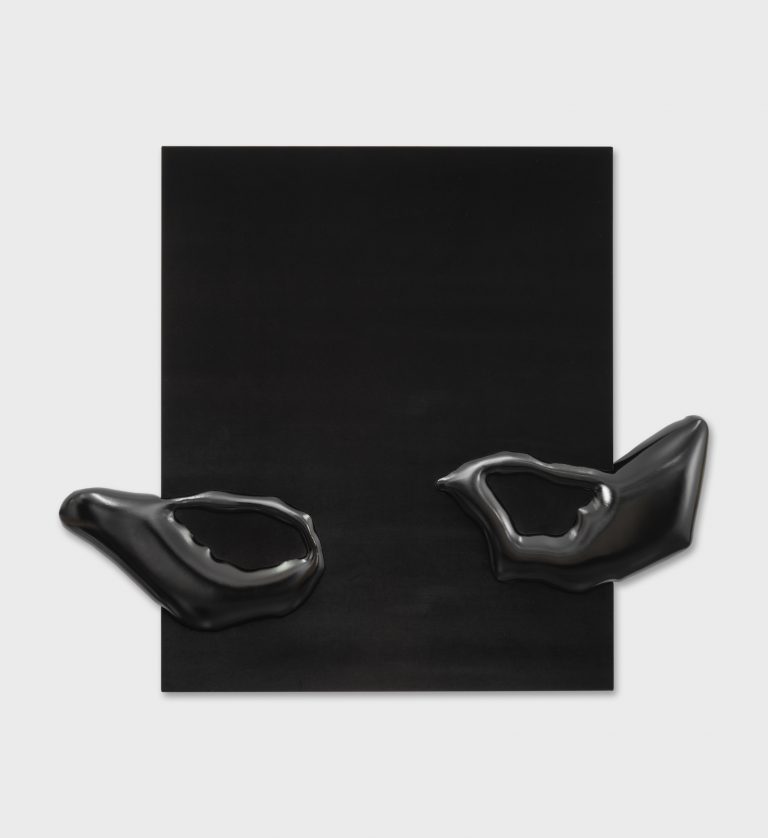 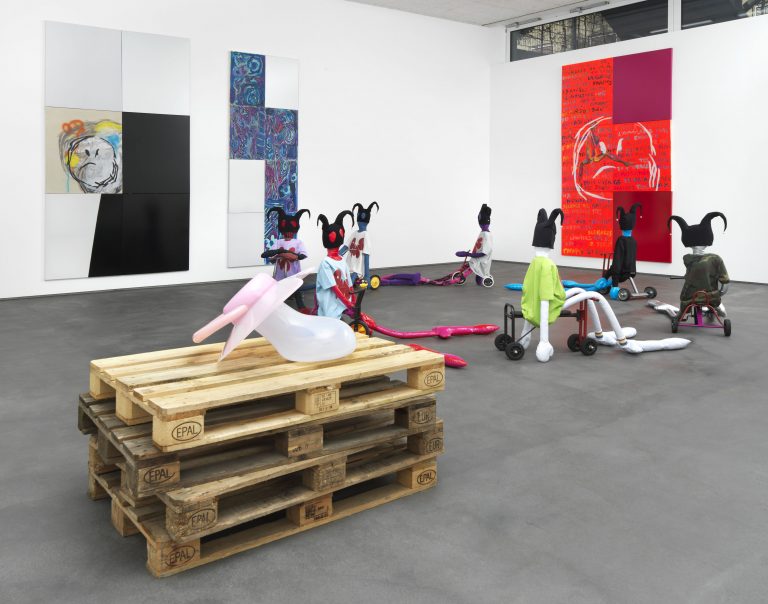 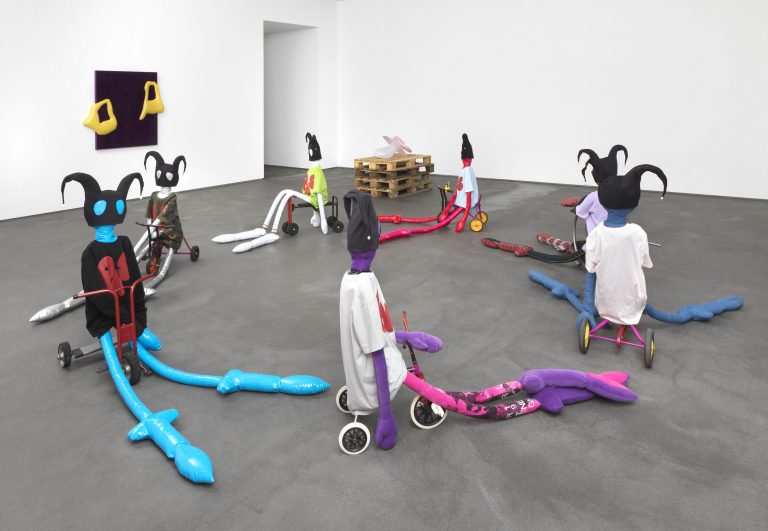 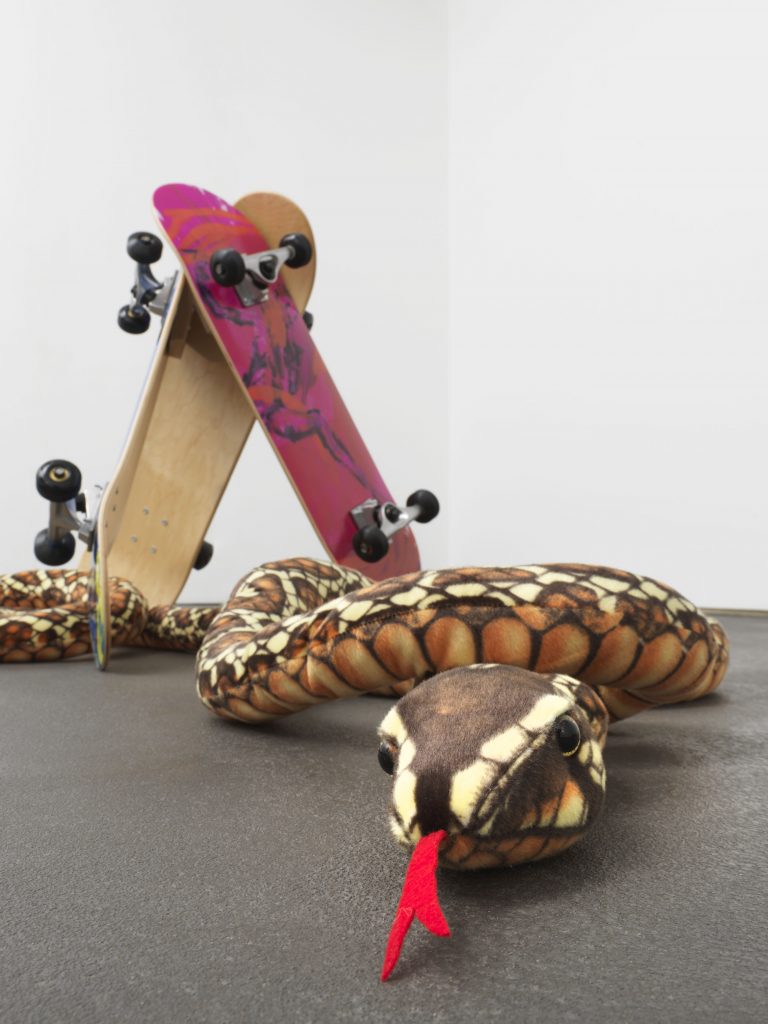 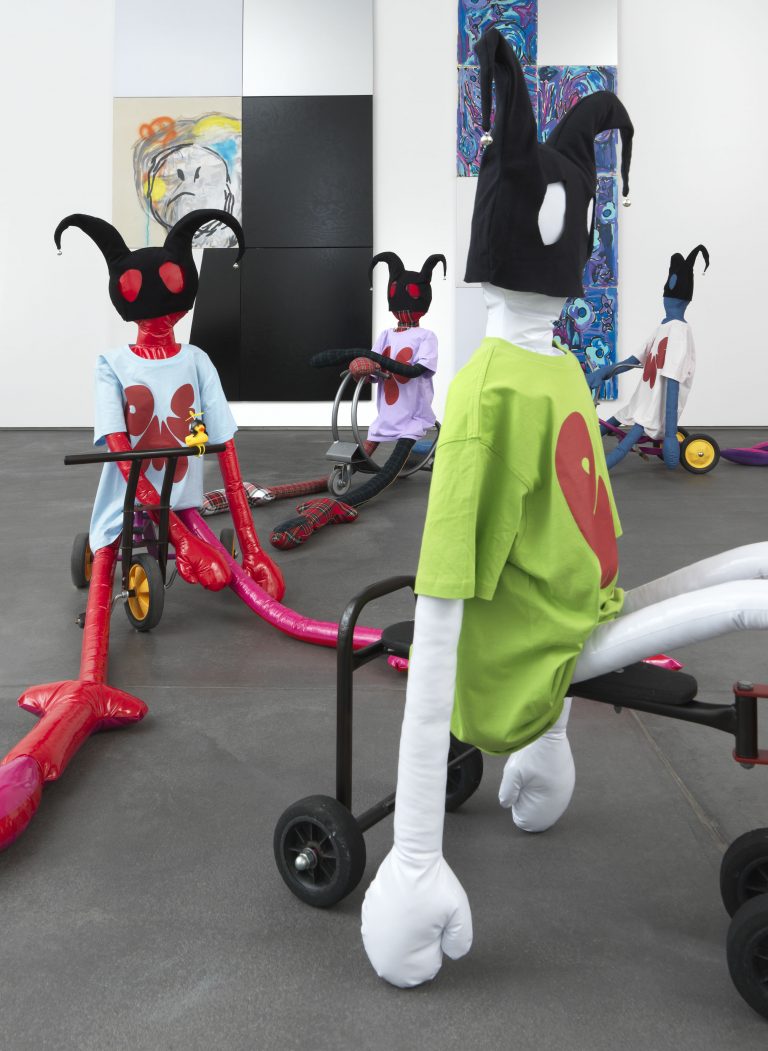