At Gallery Weekend *Discoveries, KÖNIG Gallery will also focus on aspiring artists. In the former church of St. Agnes in Kreuzberg, the MISA DISCOVERIES will show young artists who have hardly been seen in Germany so far, but who have already attracted international attention with their paintings. Here we are taking a look at the painter Super Future Kid.

Super Future Kid  I was born in East Germany and have been living in London since 2008. The fall of the wall had a very big influence on who I am today, both as a person and as an artist. When I was 8 years old was the fall of the wall and suddenly everything around me became extremely colorful. Even though I lacked nothing as a child, after a whole new world opened up for me. There were suddenly colorful cartoons, new toys, but also completely new products in the supermarket.

SFK  Each work I create tries to capture a certain feeling of me. I think that subconsciously I am trying to better understand myself and life in general. The series I am currently showing at MISA Discoveries began with the work in which I first painted the grizzly character. The girl with the flowing hair appears very often in my work. But the character of the bear was there all at once. This gave rise to the other two works, in which I want to show both in their own world.

GWB  Could you describe your upcoming exhibition in a few words? What can we expect to see?

SFK  My next show is at Mindy Solomon Gallery in November in Miami. It is a two person show together with Yvett Mayorga. Everything is themed around the wild garden theme, it’s us very idyllic and close to nature. A lot with plants and insects and wants to reflect the relaxing feeling when you are in nature. This theme is perhaps related to the fact that I just have my studio in beautiful large garden. It is the first time in a long time that I really appreciate the four seasons. 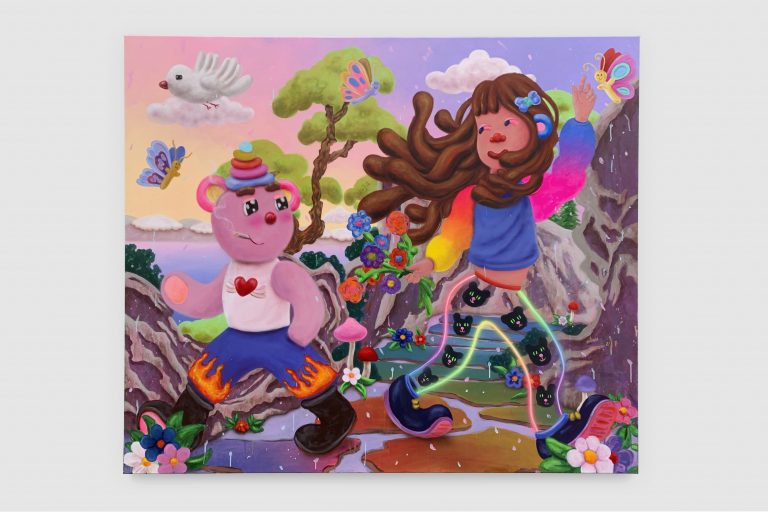 GWB  Are there any particular references you like to point out?

SFK  There is not one specific song that comes to mind. But the best soundscape would be birdsong, the rustling of leaves and the wind. 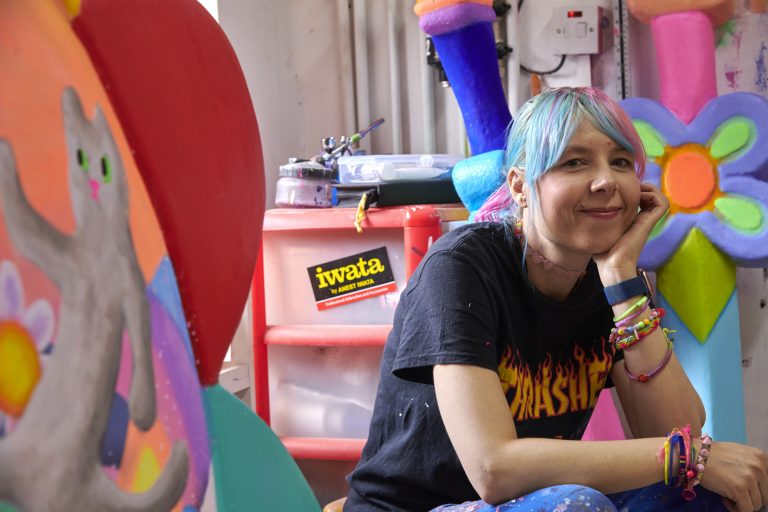 Super Future Kid was born in east Germany is 1981 where she spent the first 8 years of her life completely unaware of the western world. The culture shock that followed the fall of the Berlin wall left a great impression on her and played an important role in her love for bold colours, toys and everything joyful and playful. She attended the Chelsea Collage of Art and Design and the Academy of Art Berlin Weissensee. Since her graduation in 2008, she has shown her work in several group and solo shows nationally and internationally including London, New York, Berlin and Los Angeles.