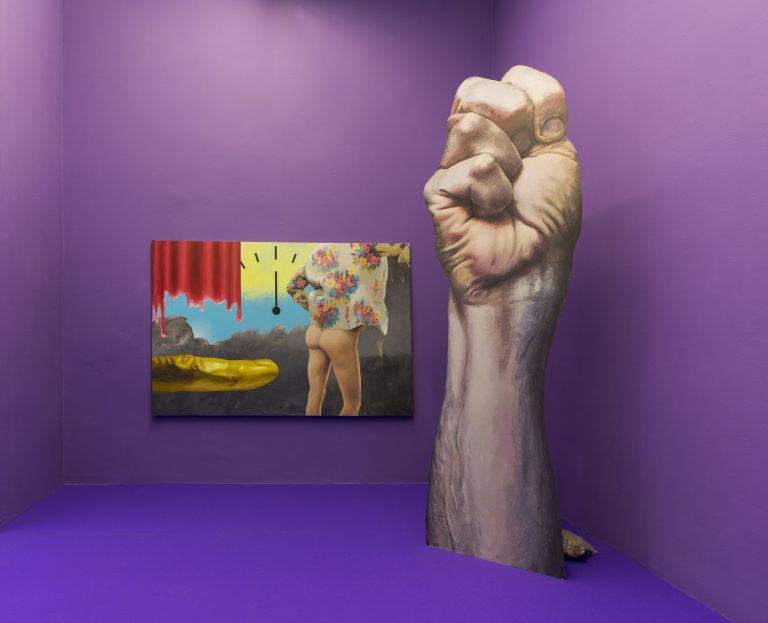 As part of this year’s Gallery Weekend, Crone Berlin is presenting a solo exhibition by the artist Ashley Hans Scheirl, who, together with her/his partner Jakob Lena Knebl, will be exhibiting in the Austrian Pavilion at the Venice Biennale 2022.

Paintings, sculptures, and drawings merge in the gallery spaces to form a room-filling installation. They lead the visitor into an exuberant, seemingly insane dream world. Consumption and the search for meaning, restriction and freedom, greed and renunciation, excess and isolation, rebellion and resignation, identity and transformation, gender and hierarchy, individual lifestyles and the global economy of rejection collide here and culminate in a digital-anarchist-neutralized big bang, or at least in a new world currency that gives the exhibition its title: Currencies of De*Capital Delirium.

Angela, Angela Scheirl, Angela Hans, Angel Hans, Zeze Hans, Ah, A A A A, Hans Scheirl, Hans, Hansi, Hansda, Hans von S/hit, Scheirl, Ashley Hans Scheirl was born in Salzburg (Austria), in 1956. She/He lives in Vienna. The work she did in the 1990s as part of London’s underground dyke scene contributed to the development of a conceptual practice that was constantly exchanging with the Viennese scene via the techniques of experimental cinema, painting, object art, actions in public space, performance and music, with all genres treated as equal. Indeed, in this artist’s practice, these “disciplinary techniques” are brought together to function on the model of a lesbian, queer sexuality. This transitioning of one fine arts category toward another was accompanied during these years when the artist was moving between London, Vienna, and New York by a metamorphosis of her/his own body, helped by the injection of testosterone. Her/his mutating name reflects this constant becoming which is never really static. Her/his recent self-expression in the use of painting, after multiple experiments with Super 8 and video cameras, encouraged Angela— now Hans—to transform her/his masculine look by a new phase of emancipation and to become Ashley, a painter who carefully cultivates her/his androgynous appearance. 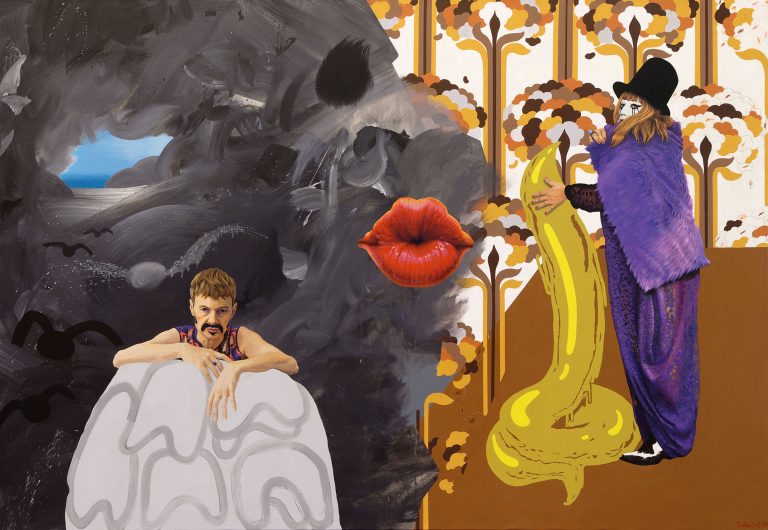 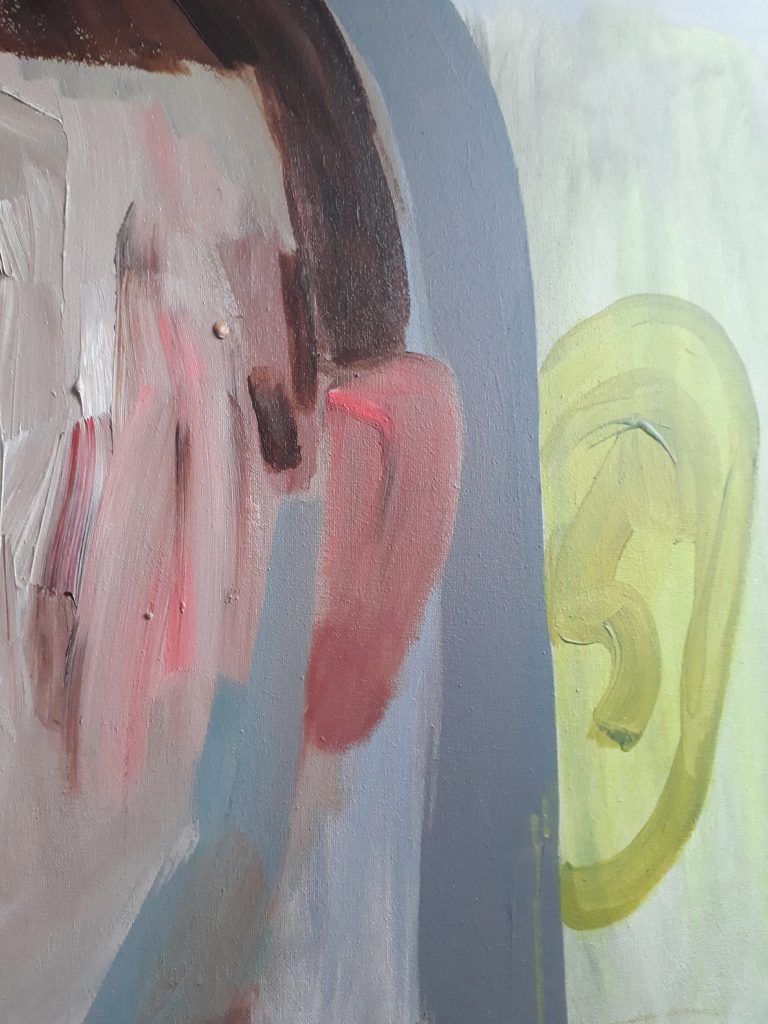 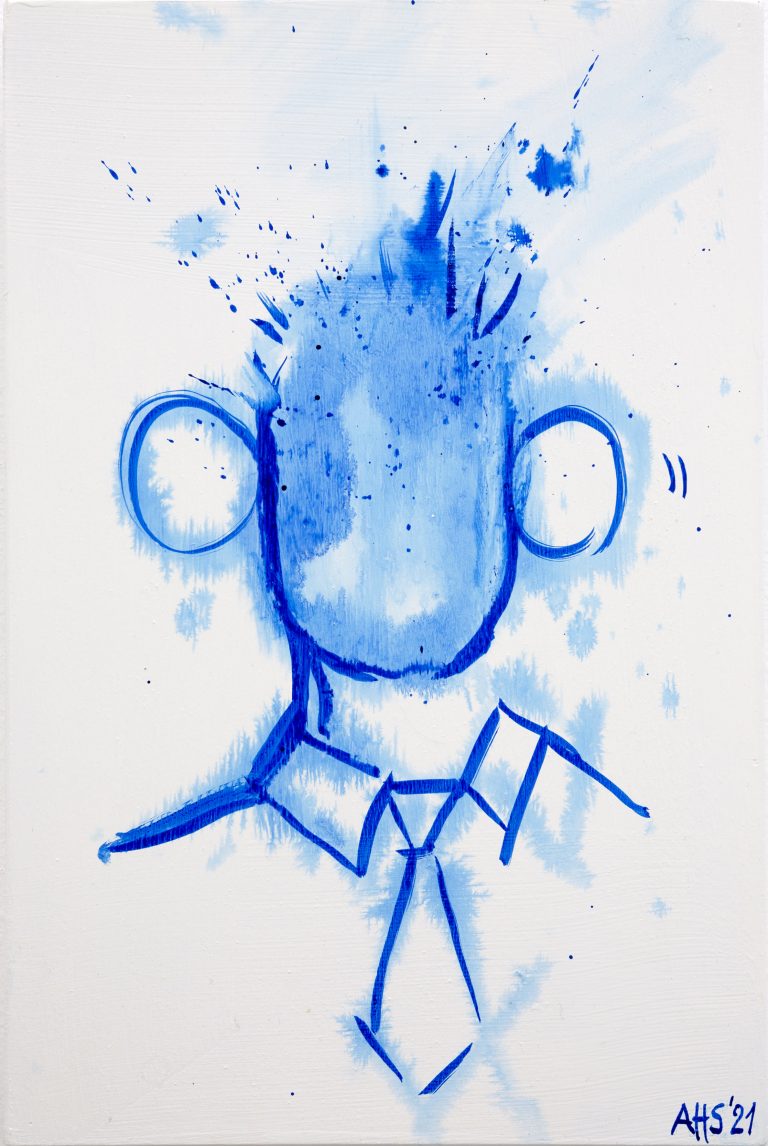 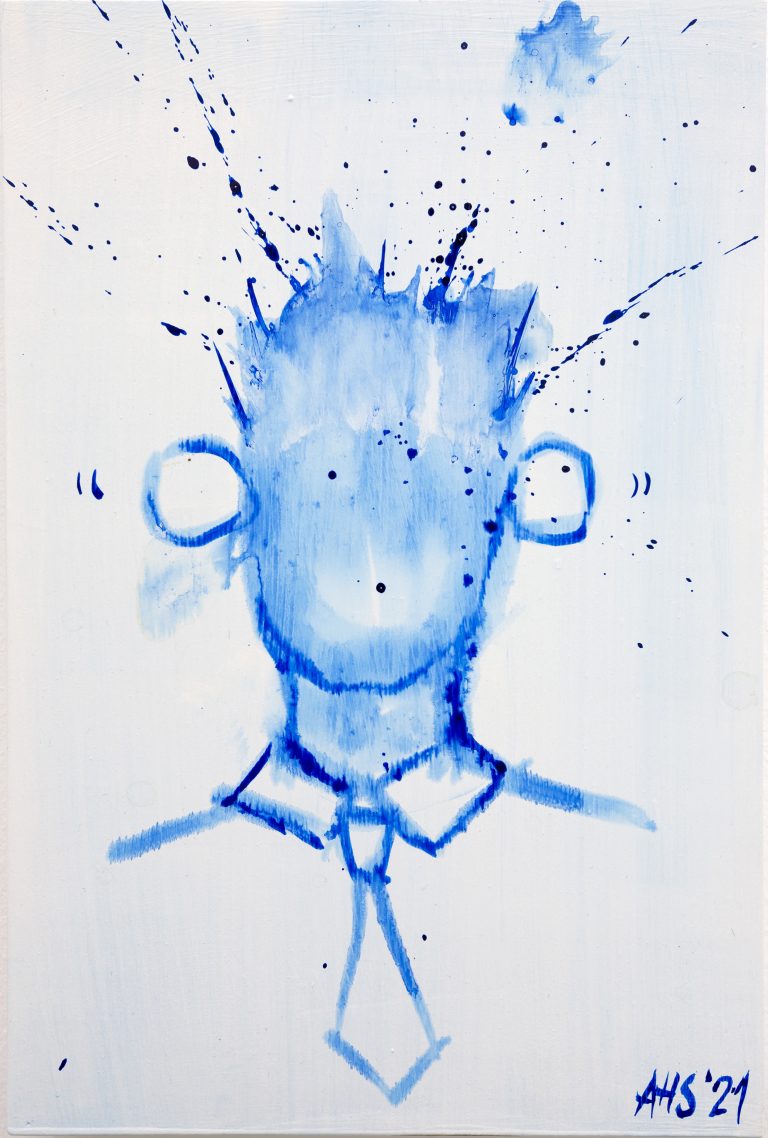 “To give up monolithic ideas of ‘self’ and cultivate
an open mind to the ‘other,’ we need to allow the interpersonal other to exert agency. An artwork that assertively performs itself as a lively dynamic of interpersonal ‘selves’ mirrors the dynamic of viewership and thereby invites engagement in interagency. Interagency includes intra-agency and always performs its relationship to death, loss, and becoming . . .”

This statement is taken from Hans Scheirl, painting’s inter/agency, research paper for MA Fine Arts, Central Saint Martins College London, 2003. Inspired by Johnny Golding, also known as Johnny de Philo, Scheirl began to study Jean-François Lyotard’s book Économie libidinale, published in 1974. In his text To Tremble the Ejaculate, Johnny de Philo analyses Dandy Dust, the cult underground queer film made by Hans Scheirl and shown in many international festivals. In the subtext, De Philo returns to the theme of polymorphous perversion discussed in the French philosopher’s book, and to the cyborg portrayed by the American writer Donna Haraway. I am Dandy Dust expresses the desire to embody the constant metamorphosis of the body, in keeping with opportunities and encounters, like the grain of the Super 8 film or video pixels reacting to light and shadow. According to Johnny de Philo, this metonymic art, which takes the part for the whole—as in poetry a sail stands for the ship—is close to the abstraction of the capitalist economy. Money and the grain of the pixel, while representing and guaranteeing what exists, are by the same token the sign of what does not exist. In her/his paintings after 2016, in her/his contributions to Documenta 14 (2017) and the Lyon Biennale 2019 (together with Jakob Lena Knebl), with her/his wrapping of the Vienna City Hall (also 2019) and her/his exhibitions at Kunsthaus Bregenz or Galerie Crone Vienna, Scheirl takes up Lyotard’s book again and again, now from Ashley’s perspective, whereas before it was Hans who oversaw the elaboration of the paintings.

Scheirl now continues this path in his/her exhibition at Crone Berlin as part of Gallery Weekend: in his/her new paintings, body parts, pictograms and comic elements form an undefined world. Perspective entanglements and absurd paradoxes determine the Surreal pictorial worlds in which the painterly is intertwined with digital visuality. 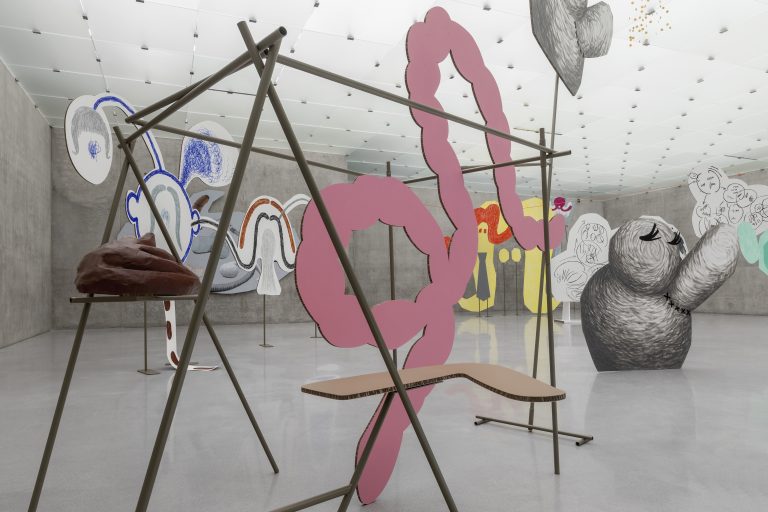 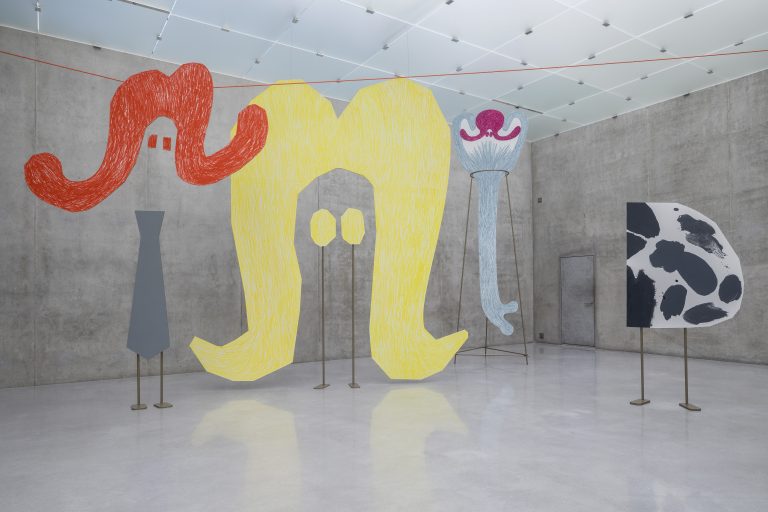 The unresolved tension of the intermingling of different forms of expression goes hand in hand with Scheirl’s absurdly obscene iconography. Body orifices, excrement, and genitals are captured on canvas in dislocated, fragmented, and monumentalized forms. Critically and yet humorously, the artist’s paintings stage taboo objects that take over the paintings alongside status symbols, such as cars, clothing, and luxury objects. Visions and perversions, innocent desires, forbidden appetites and insane delusions are relentlessly captured. As in a dream, meaning is dissected by enigmatic signs, fragmented objects, and unresolved contrasts. From all these medial, stylistic, and thematic transgressions, a world emerges in which order and disorder interpenetrate. A “chaosmos” in which—loosely based on James Joyce—the duality of limitation and infinity, chaos and cosmos is suspended and the two poles combine in a synthetic way.

Ashley Hans Scheirl’s painting thus inscribes itself in the discourse of postmodernism, but also the post- digital age, in which grand narratives make way for a pluralistic, chaotic, and random world. In a time where fixed concepts and norms can no longer exist, identity as the experienced inner unity of the self is replaced by a concept of subject characterized by transformation, fragmentation, and heterogenization. Following an illusion of free will, the body appears as a variable that can be changed at will. 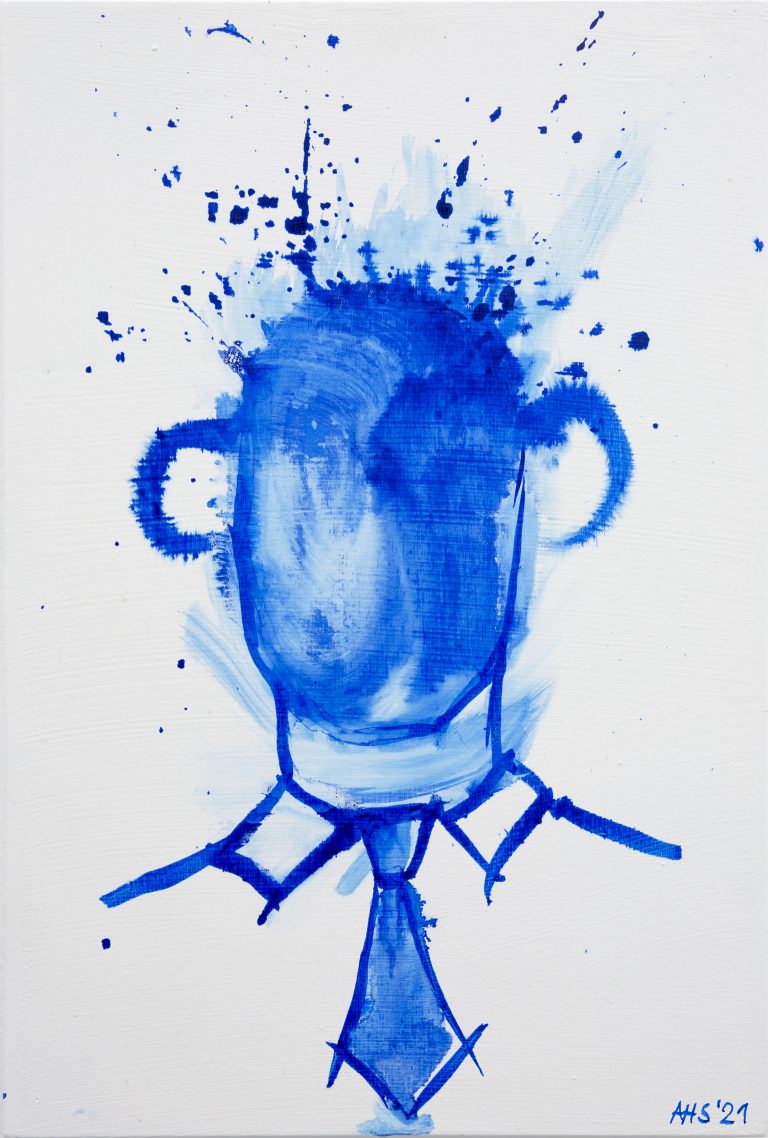 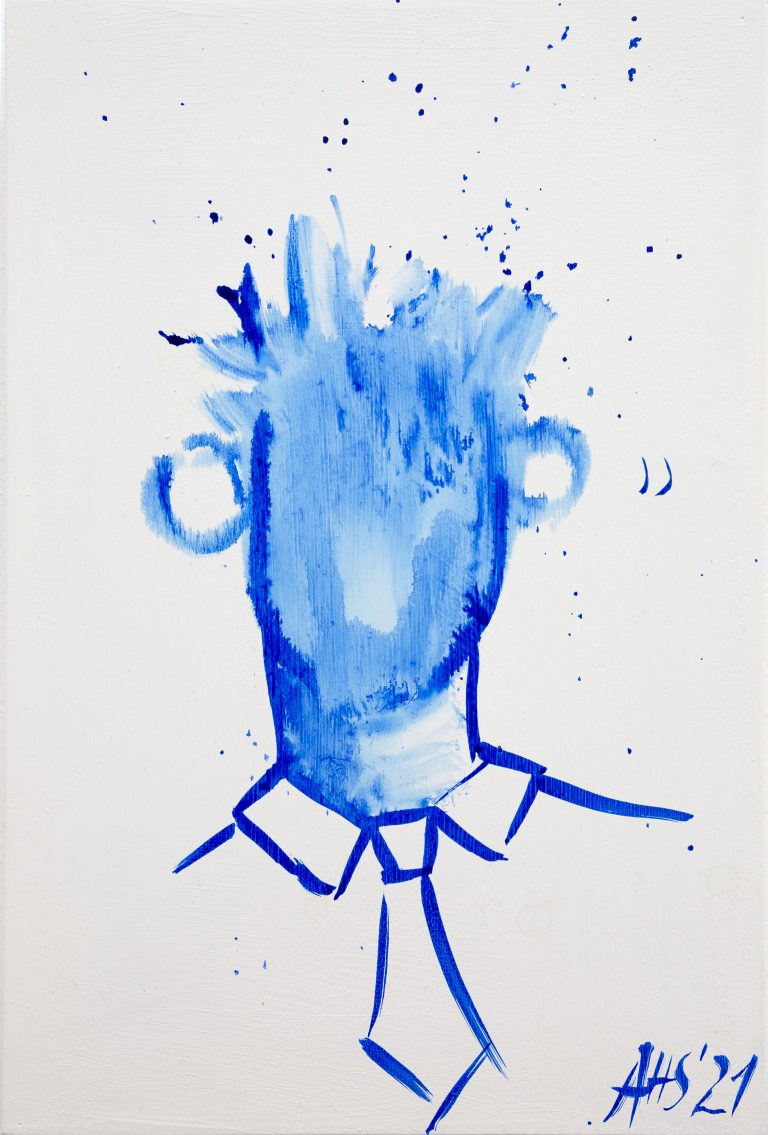 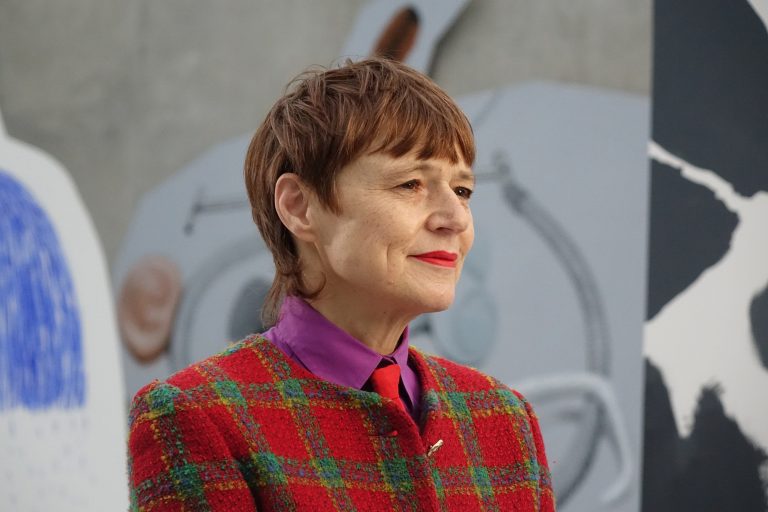 Scheirl lived in London for sixteen years, where she/ he gained international recognition in the late 1980s for her/his experimental film and video works. Since the late 1990s, she/he has turned increasingly to painting again. Her/his works have been shown at the Museum of Modern Art in New York, the Kunsthalle Düsseldorf, the Kunsthaus Bregenz, the Lyon Biennale, the Kunstverein Salzburg, and the Grazer Künstlerhaus, among other places. Since 2006, Scheirl teaches at the Academy of Fine Arts in Vienna as a professor of painting. 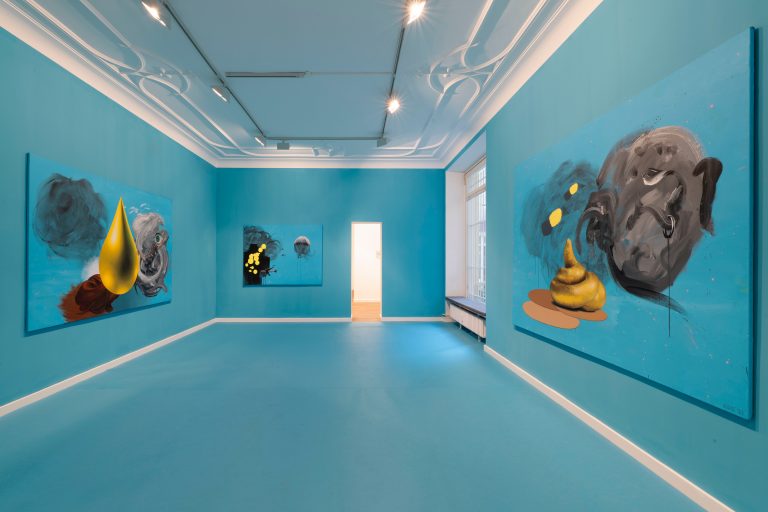 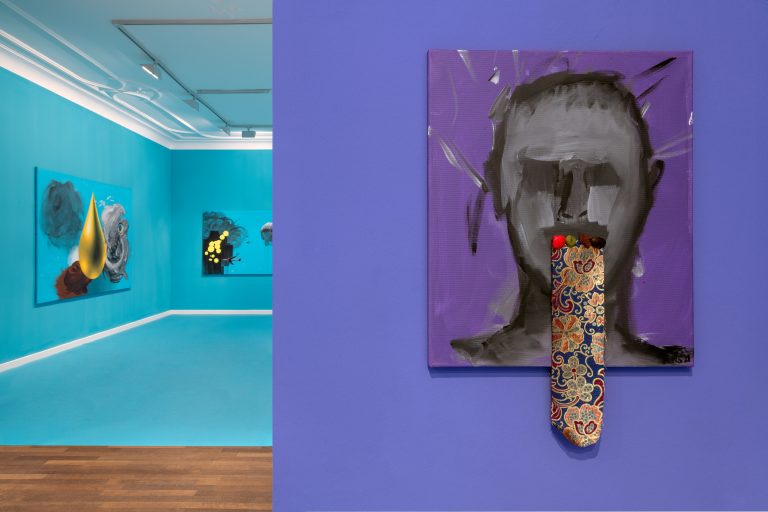 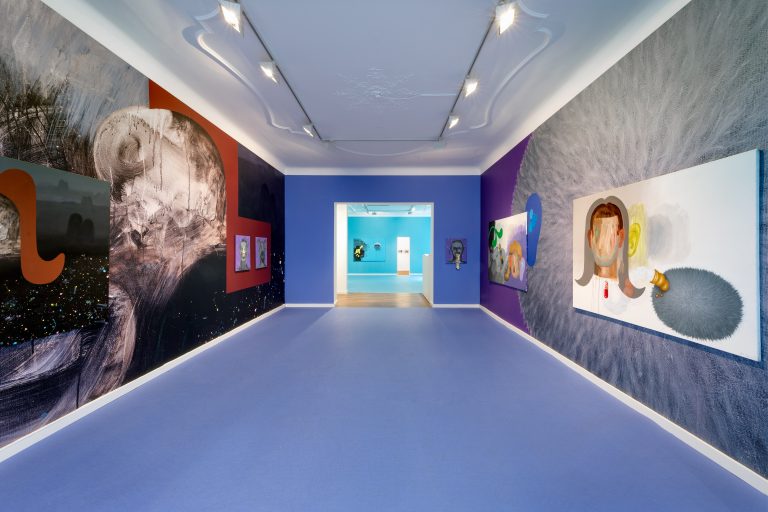