As part of the first program at the gallery’s new location in Berlin Schöneberg, ChertLüdde is pleased to present Die Blüten von Berlin, an exhibition titled after a song written and performed by Frick’s late friend, Ovo Maltine. Show- casing works by artist couple Petrit Halilaj & Alvaro Urbano, along with photographs by Annette Frick, the exhibition extends as a memorial gesture towards the creative practices of the featured artists and the collective they represent. 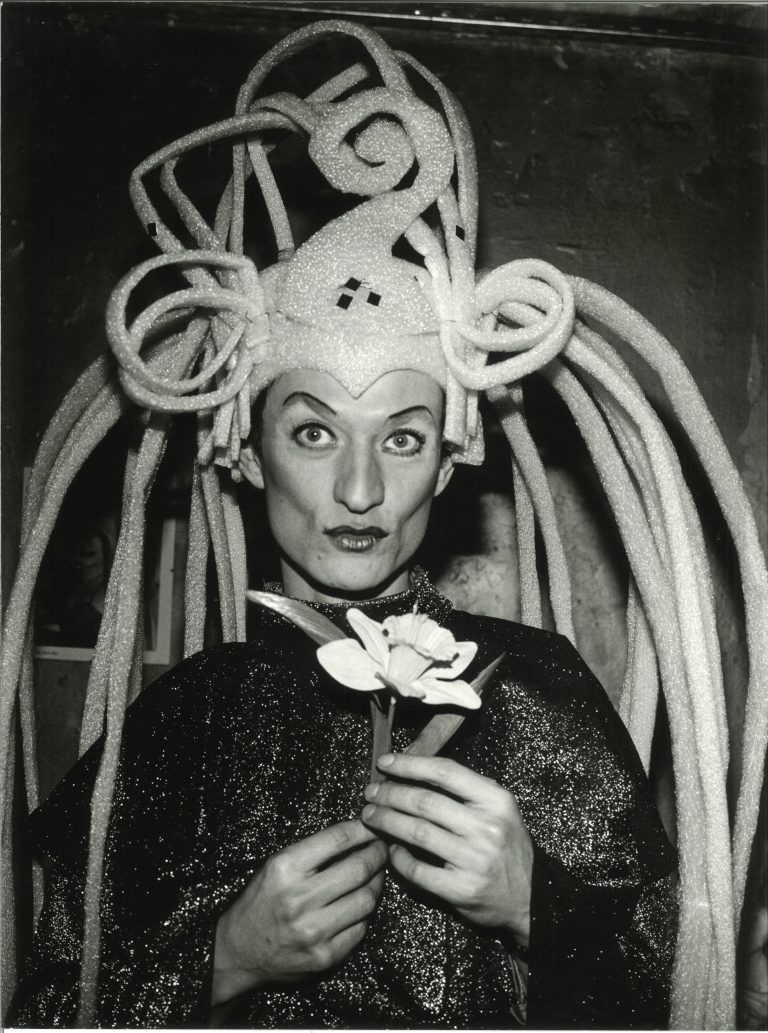 The exhibition celebrates Berlin’s queer legacies and traces the remnants of the gallery’s previous inhabiter, Deko Behrendt, while also flourishing in the present moment. Amid the gallery’s renovation, the artist duo Petrit Halilaj & Alvaro Urbano came to preserve layers of wallpaper to produce unique artworks hanging once again from the build- ing’s walls. Renewed with various motifs of celebration, these works become the emotional landscape for the personali- ties captured in the close and intimate camera of Annette Frick. Documenting Berlin’s multiple subcultures, her analog monochrome images reveal moments of carnivalesque joy and freedom in the lives of people existing outside the heteronormative orders of urban society. Among Frick’s portraits of drag queens, performers and friends are also the largescale floral sculptures of Halilaj and Urbano. Correlating with significant dates from the couple’s past, these flowers bring forth the show’s underlying desire to commemorate the personal histories connected to a place as it continues to adapt, evolve and bloom. 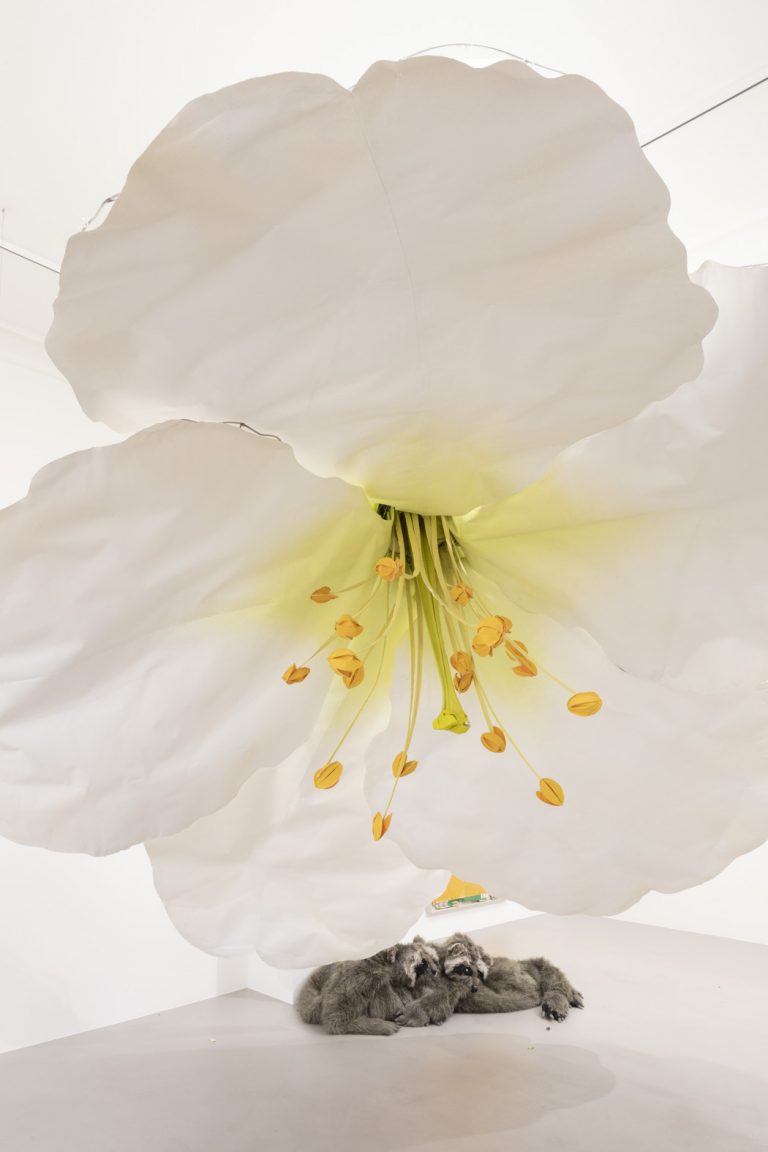 Sofía José Salazar Rosales (b. Ecuador, 1999) is an artist who stitches together her ancestral heritage to produce evocative sculptural works. Referencing the displacement of people and goods, her objects hold social and economic connotations of the trans-Atlantic trade routes. Products of containment inhabit the gallery to express the compassionless systems of colonialism and late capitalism. Delicately woven with the environmental exploitation of the region she comes from, one of Salazar Rosales’s objects hangs from the ceiling in a beaded produce bag filled with concrete bananas. An object awaiting transportation, the work is left to continually resist the weight it has been given. This analogy is witnessed in the cultural artifacts recreated in the gallery, transforming the space into a place to gather memories and lived experiences. By using various methods of preservation, fossilization and reproduction, Salazar Rosales imbues in her work an overwhelming sense of empathy that navigates the visitor through the space. 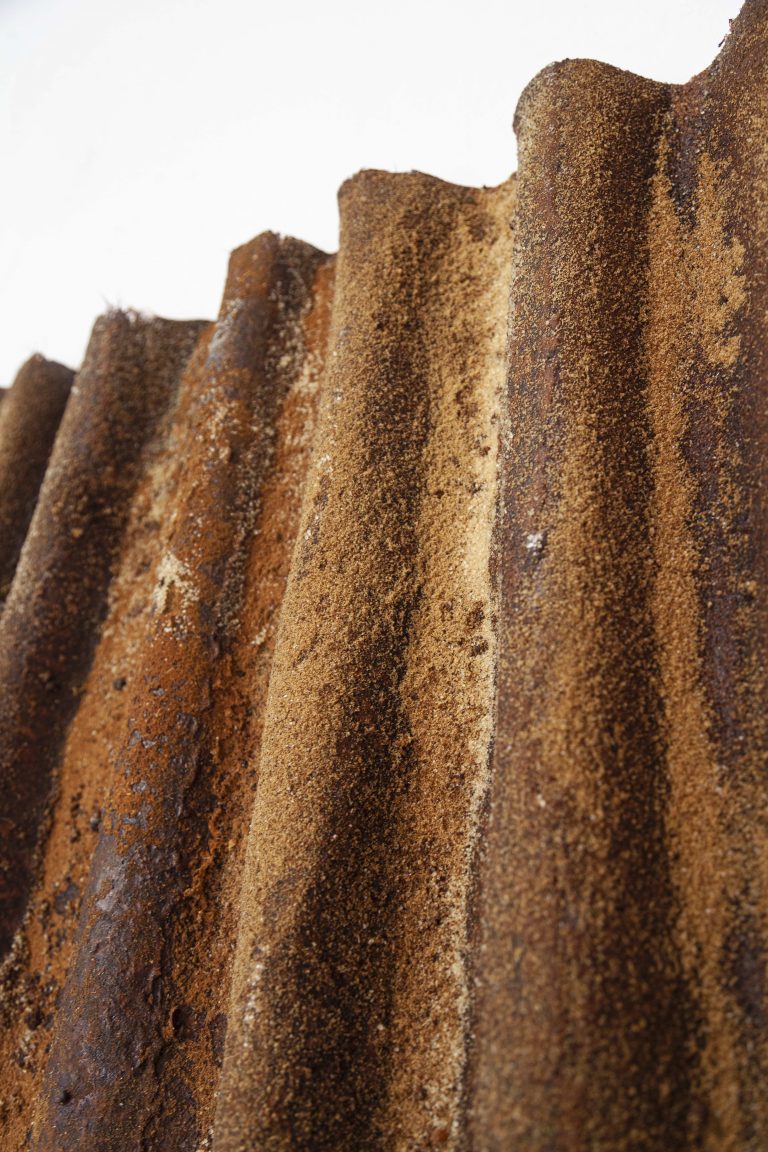 Sofía José Salazar Rosales (Ecuador, 1999) lives and works between Paris, France and Quito, Ecuador. She is currently studying towards a master’s degree at the School of Fine Arts (ENSBA Paris) in the ateliers of Tatiana Trouvé, Petrit Halilaj and Alvaro Urbano. She holds a Bachelor of Fine Arts degree with distinction from School of Fine Arts of Lyon (ENSBA Lyon) where she worked in the studios of Pauline Bastard and Niek Van de Steeg.

Sofia’s work develops from a sentence she wrote: “Hay cuerpos cansados por el viaje que buscan enraizarse” (There are bodies tired from the journey that seek to root). Her interest focuses on how objects have a potential to show social, political, and economic contexts, specifically linked to the displacement of humans, goods and other objects.

She conceives her pieces as spaces of reconciliation to negotiate between the object, the material and their history throughout different contexts. Reconciling is also a constructive gesture in her work, which continuously transforms the objects with particular focus on their emotional effect. Sofía and her sculptures have a relationship of affection. The artist says: “We are contextual, but also sentimental.”