Clare Woods
If Not Now Then When

Clare Woods
If Not Now Then When

If Not Now Then When, is a series of new paintings of still-lifes, chandeliers and poodles that explore the themes of fragility, mortality and urgency where delicate borders exist between sickness and health, cruelty and humanity, and life and death. Having initially trained as a sculptor, Woods’ understanding of sculptural forms have underpinned her pictorial work as she paints diverse subjects that encourage an understanding of what it means to live in a time of mass image consumption and in a world that treats banality and disaster in the same way. 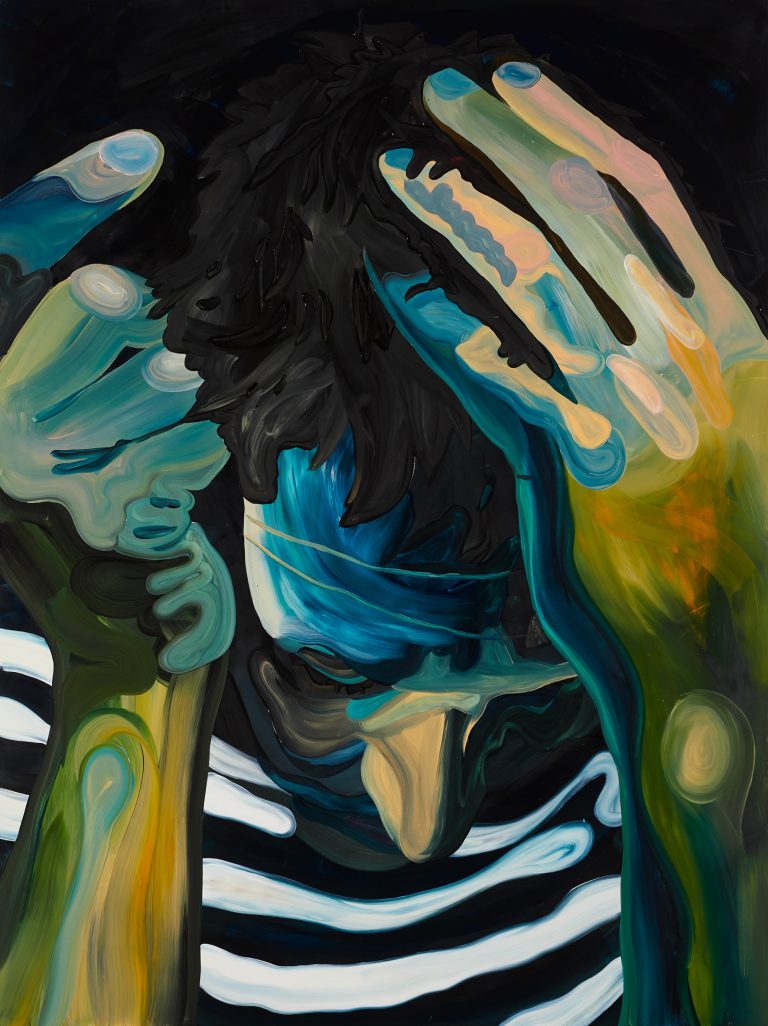 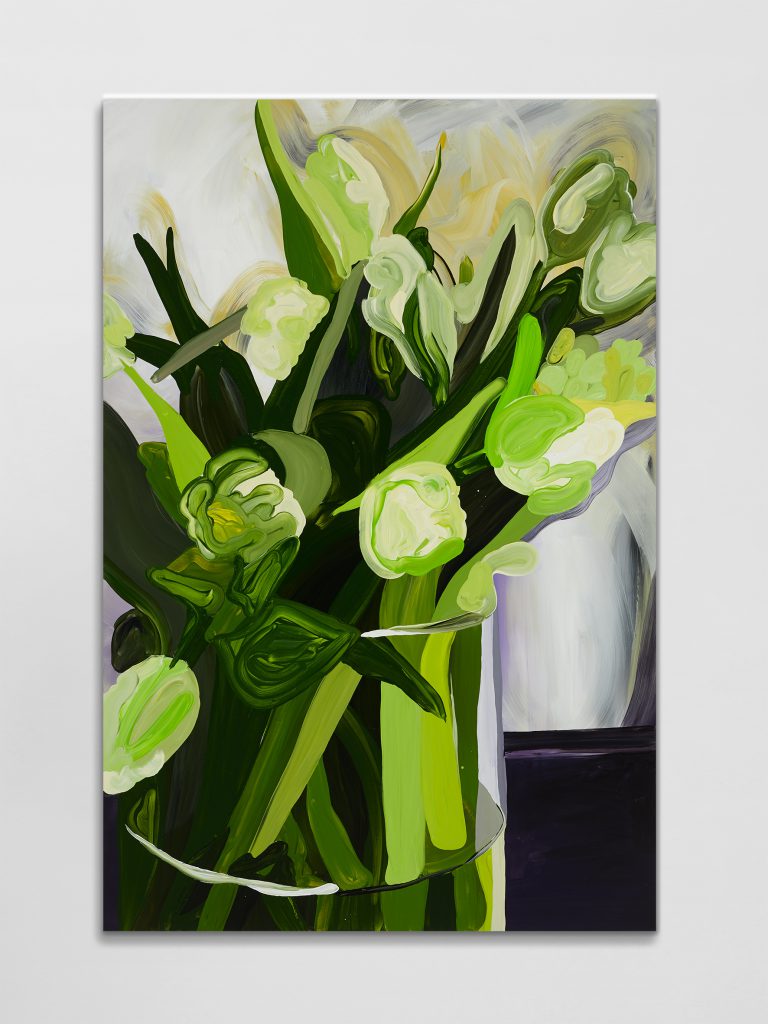 Drawing inspiration from photographs found from differing sources, Clare Woods is preoccupied in her paintings with the human environment. She explains: “I reinterpret the source imagery, cropping or repositioning the subjects so that they begin to teeter on the edge of legibility and figuration. Though my work cannot exist without photography, it is not the origin of the image that is important, I am concerned with the emotional response the imagery triggers within me and its potential for reinterpretation or translation.” 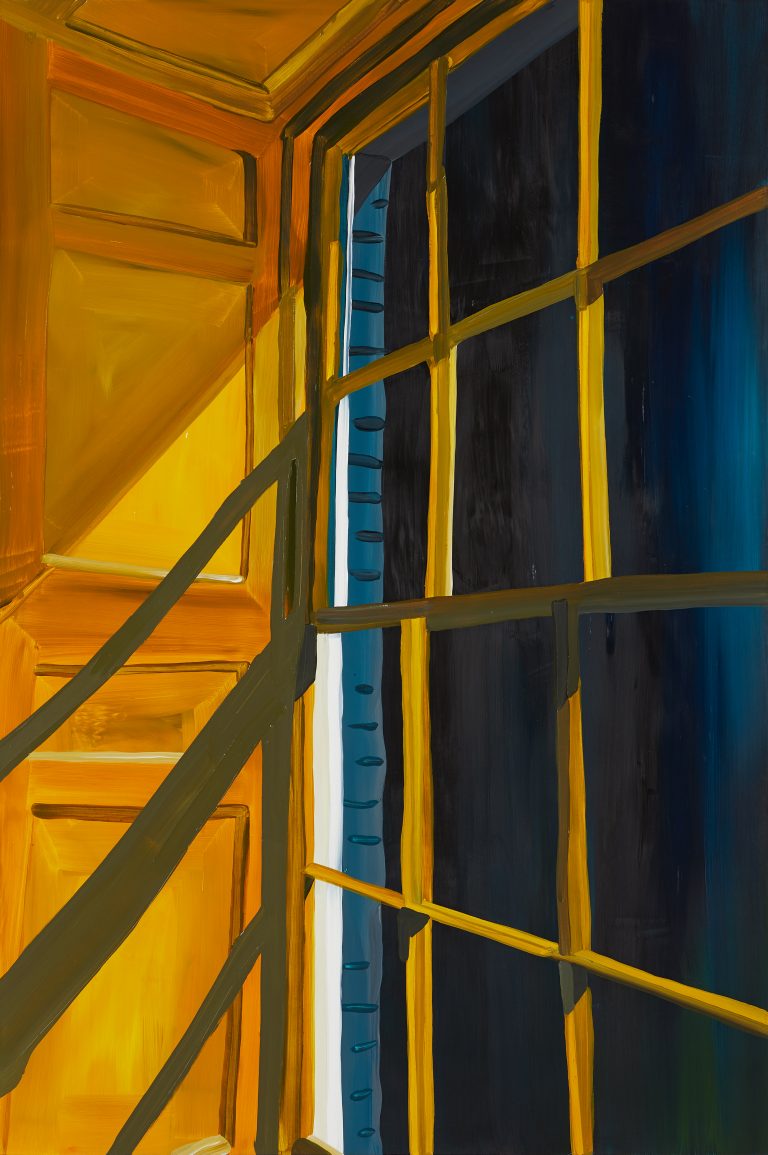 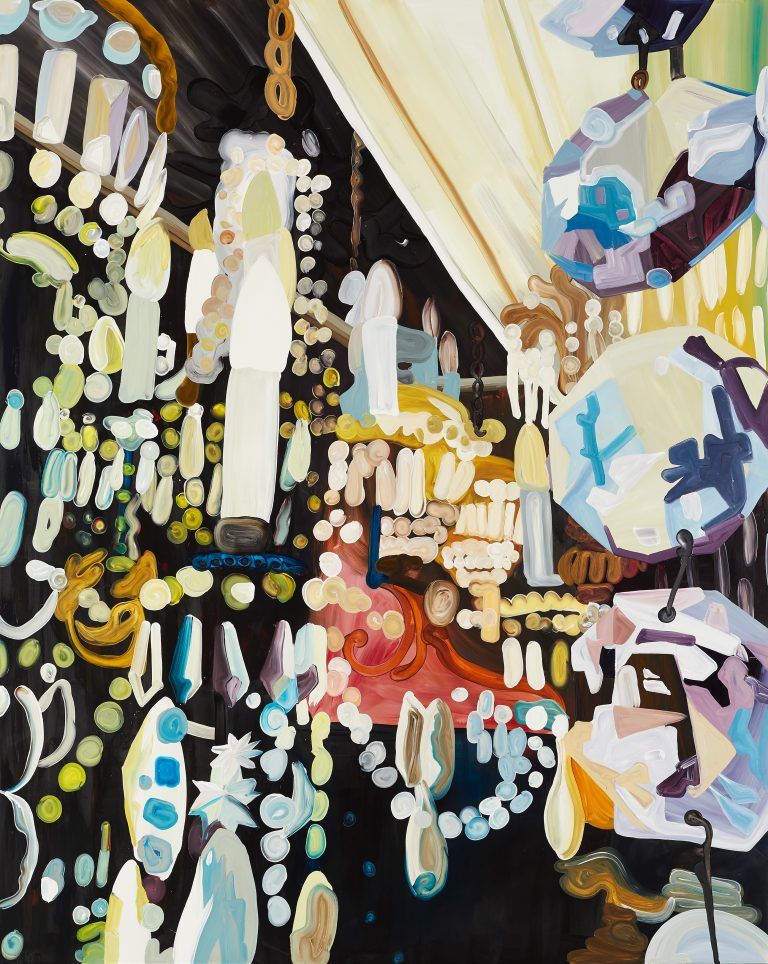 The disjunction between figuration and abstraction lies at the heart of Clare Woods’ works and during a drawing process the artist conceptually empties an image, yet this information is replaced during the act of painting in oil on aluminium. There is a physical break down of the image which allows for a slowing down and falling apart of the visual partly forcing the viewer to question their ability decipher the content. 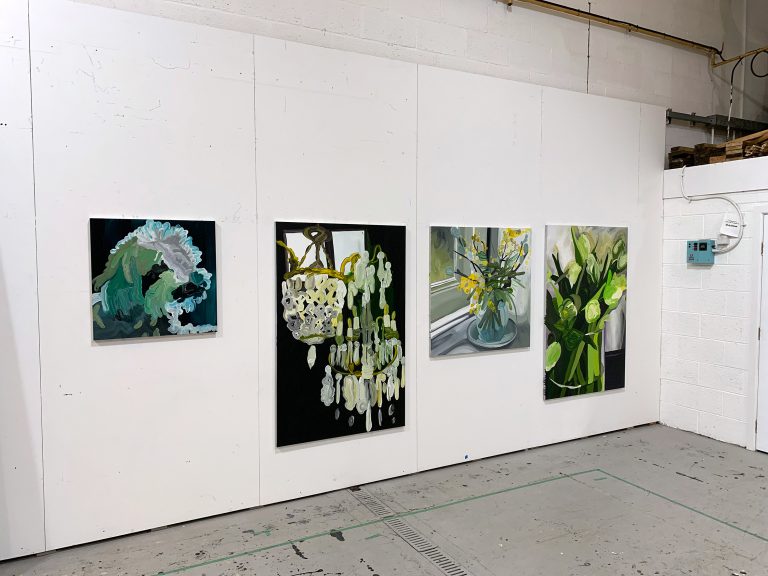 The Buchmann Galerie is pleased to announce for the Gallery Weekend Berlin a new exhibition by Bettina Pousttchi in the Buchmann Box.

Bettina Pousttchi shows new sculptures from the workgroup Vertical Highways, which were presented for the first time in this year’s survey exhibition at the Berlinische Galerie – Museum of Modern Art. The new works in the Buchmann Box represent a further development of these sculptures and consist of crash barriers from the street, which regulate movement and traffic flow in public spaces and yet often go unnoticed. Using an industrial press, the artist deforms the individual elements and assembles them into upright sculptures, which immediately attract attention with their unusual coloring. Even in their altered form, the crash barriers remain recognizable and give an idea of the forces that have affected the steel – the anthropomorphic character and the monochrome coloration fuse the individual parts into a coherent new form. The vertical alignment of the crash barriers, which are normally installed horizontally, changes the spatial perception when viewing the sculptures and gives them an architectural reference. For several years, Bettina Pousttchi has realized sculptures from urban space objects, such as street bollards, crowd barriers, bike racks, and tree protection barriers, which regulate movement in public space. The sequential use of the original object is a conceptual connection to Minimal Art and also a reference to Duchamp’s Readymades. 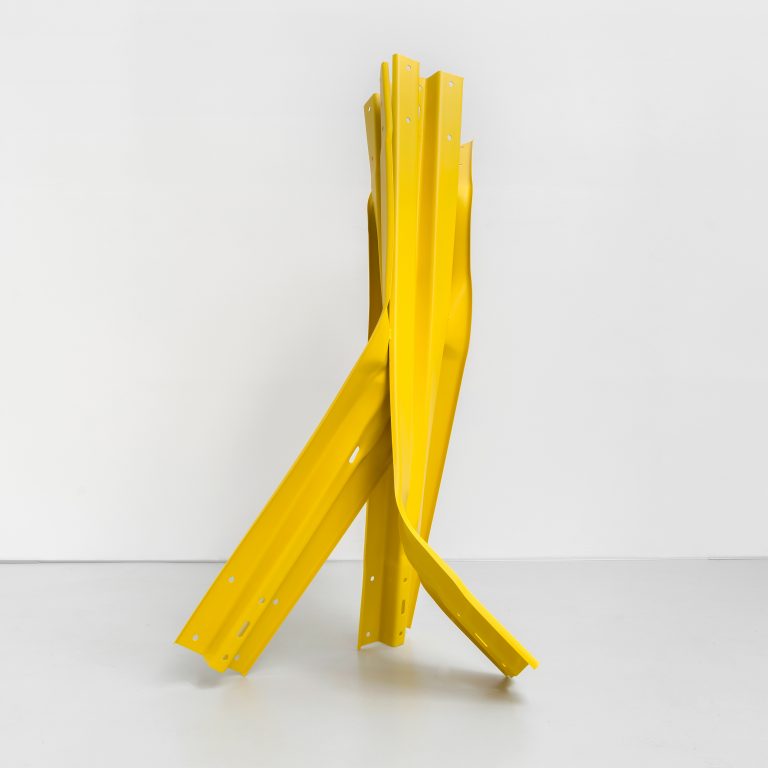 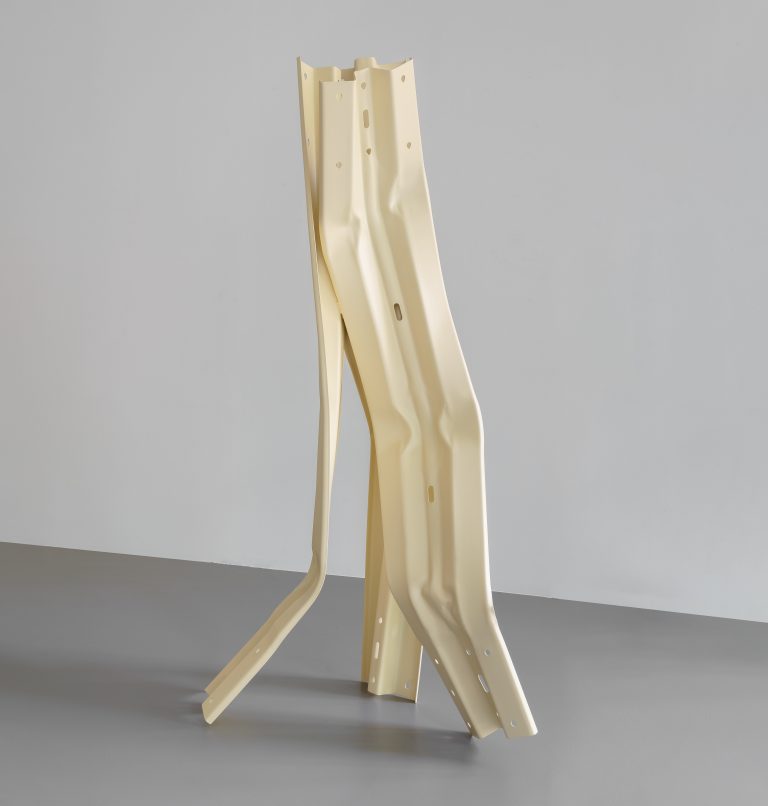 Directions is a new group of works created in recent months and exhibited here for the first time. They are wall reliefs based on photographs Bettina Pousttchi took of road markings. These templates of street arrows are collaged in bundle-like forms, cut in steel, and then colored. The cut-out objects seem to float on the wall. Their clear, sharp-edged shape makes them oscillate between a kind of pictogram and graffiti. Similar to the Vertical Highways, the Directions take up the ordering structures of public space and “crowd control,” the directing of crowds, a theme that is currently more topical than ever.

Bettina Pousttchi works with sculpture and photography, often on the scale of architecture. Her site-specific photo installations often occupy entire building facades, such as her recent work Berlin Window on the complete glass facade of the Berlinische Galerie.

Currently, works by Bettina Pousttchi can also be seen at Studio Berlin in Berghain and at the anniversary exhibition Rohkunstbau XXV. Her façade work Block for the Kunsthalle Tübingen is also still on view, as well as the permanently installed sculpture Marianne on the Riverside Sculpture Park of the Arp Museum in Remagen from mid-September.

The work of Bettina Pousttchi has received much international recognition in recent years. She has had numerous solo exhibitions in international art institutions such as the Arts Club of Chicago, the Hirshhorn Museum and Sculpture Garden, Washington D.C., the Phillips Collection, Washington D.C., the Nasher Sculpture Center Dallas, the Kunstmuseum St.Gallen and the Kunsthalle Basel. In Germany, the artist has had solo exhibitions at the Schirn Kunsthalle Frankfurt, the Neues Museum Nuremberg, the Kunsthalle Mainz, and recently at the KINDL Berlin and the Berlinische Galerie. Accompanying this exhibition, a comprehensive catalog has been published by Koenig Books London with essays by Jörg Heiser, Thomas Köhler, Jeremy Strick, and Melissa Ho. 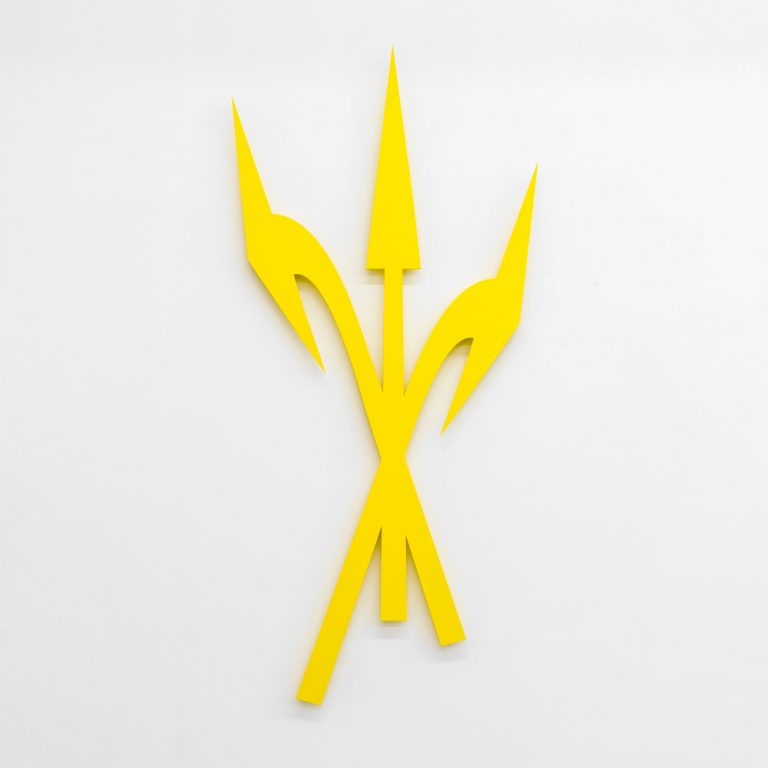 In the sequential use of the starting object lies a conceptual connection to Minimal Art as well as a reference to Duchamp’s readymades. Pousttchi works with sculpture and photography, often on an architectural scale. Her site-specific photo installations occupy entire buildings, such as the recent installation Berlin Window on the façade of the Berlinische Galerie. 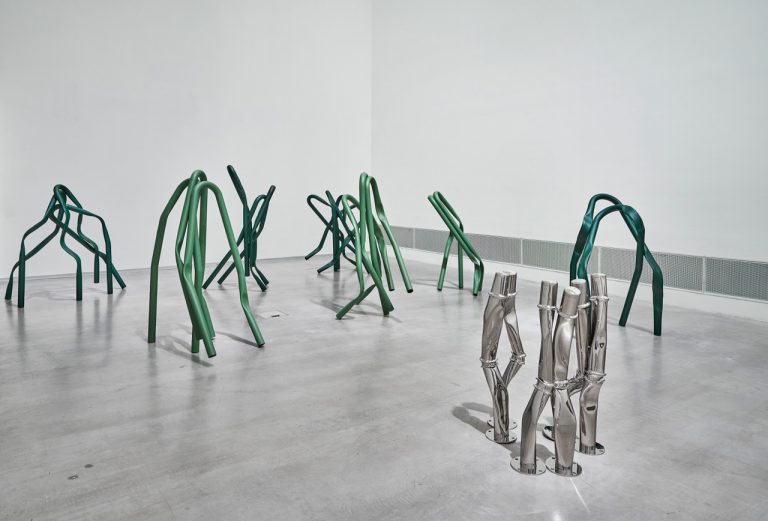 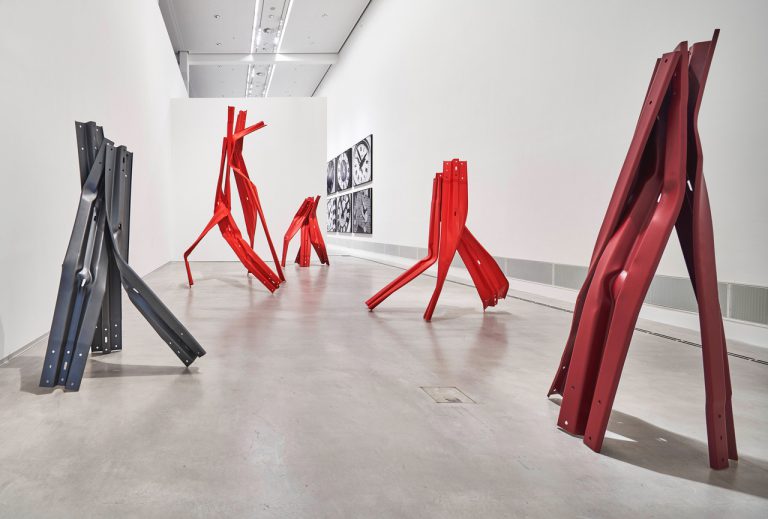 Bettina Pousttchi shows for the Gallery Weekend new sculptures from the workgroup Vertical Highways, which were presented for the first time in this year's survey exhibition at the Berlinische Galerie - Museum of Modern Art. The museum produced a podcast with a conversation between Thomas Köhler (director Berlinische Galerie) and Bettina Pousttchi. It provides an exciting insight into the development and conception of this group of works. The podcast is in German only, but you are warmly invited to visit the exhibition at Buchmann Box and see for yourself or visit Buchmann Galerie's website for further information on the series. 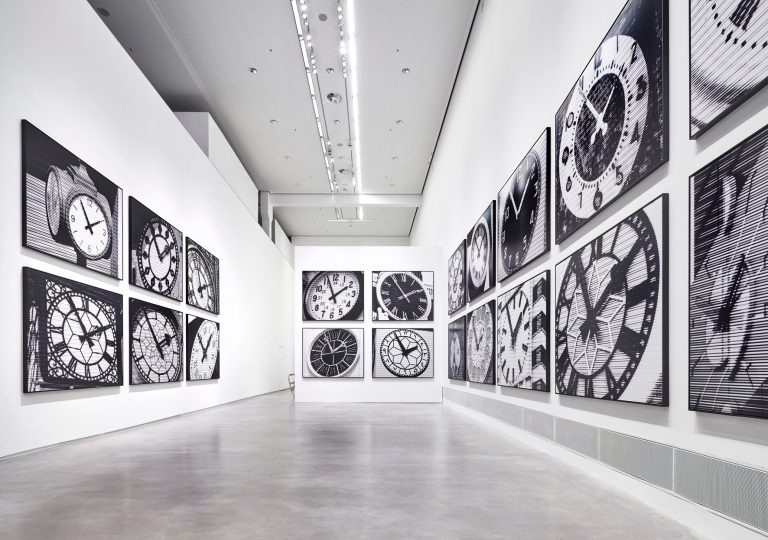