The Buchmann Galerie is pleased to announce a solo exhibition of new work by Bettina Pousttchi for Gallery Weekend Berlin. 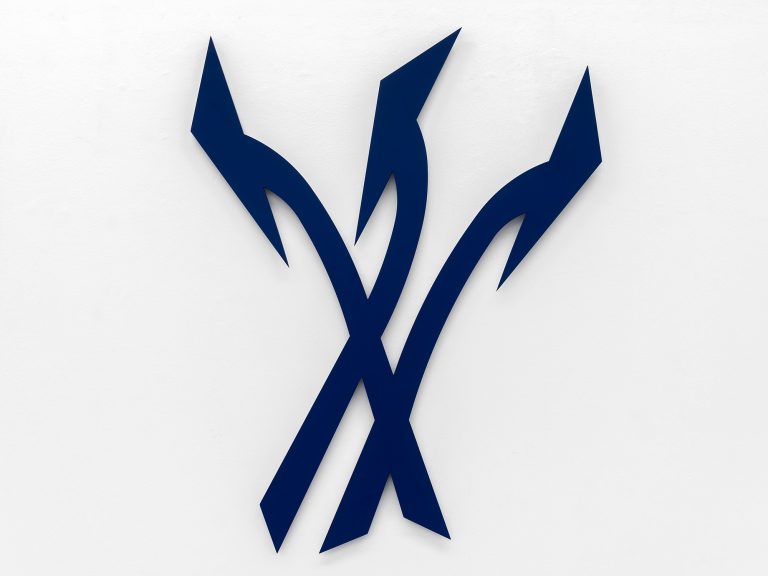 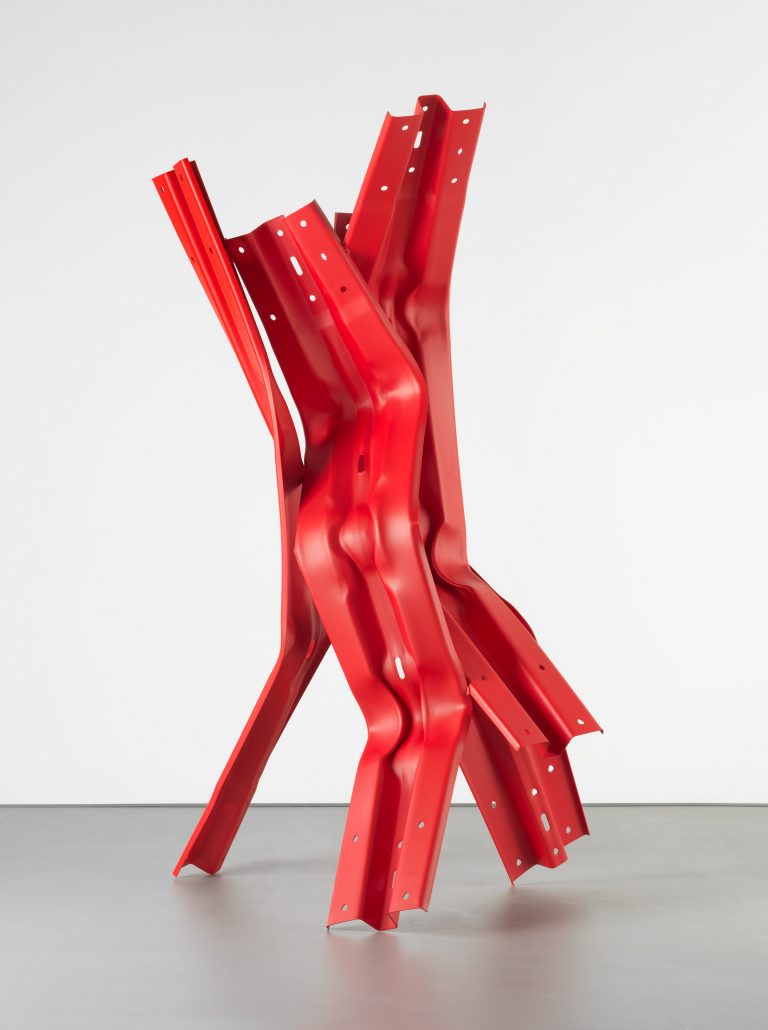 In the new works, Bettina Pousttchi deals with the objects and sign systems of the continually changing urban space as an environment for living.

Directions is the title of a new group of works by the artist that is the focus of the exhibition. It is a series of wall reliefs made out of cut and colour-coated steel, whose shape is derived from street signs in the form of arrows. These urban sign systems, which we often perceive only unconsciously, appear as if they have been cut out of their environment and placed in a new context of meaning. Mounted at a slight distance from the wall, the cut-out objects seem to float. Their sharp-edged form makes them oscillate between a kind of pictogram and graffiti. The regulative function of these signs and their influence on the movement of bodies in public space are called into question—a single direction is extended by multiple directions. 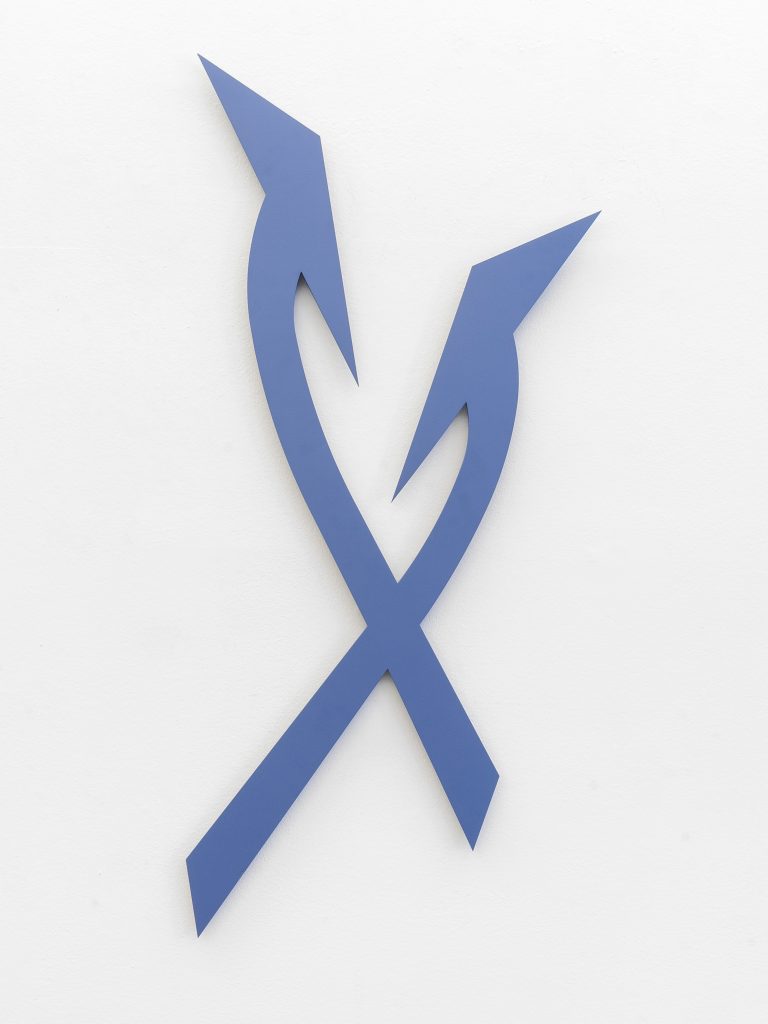 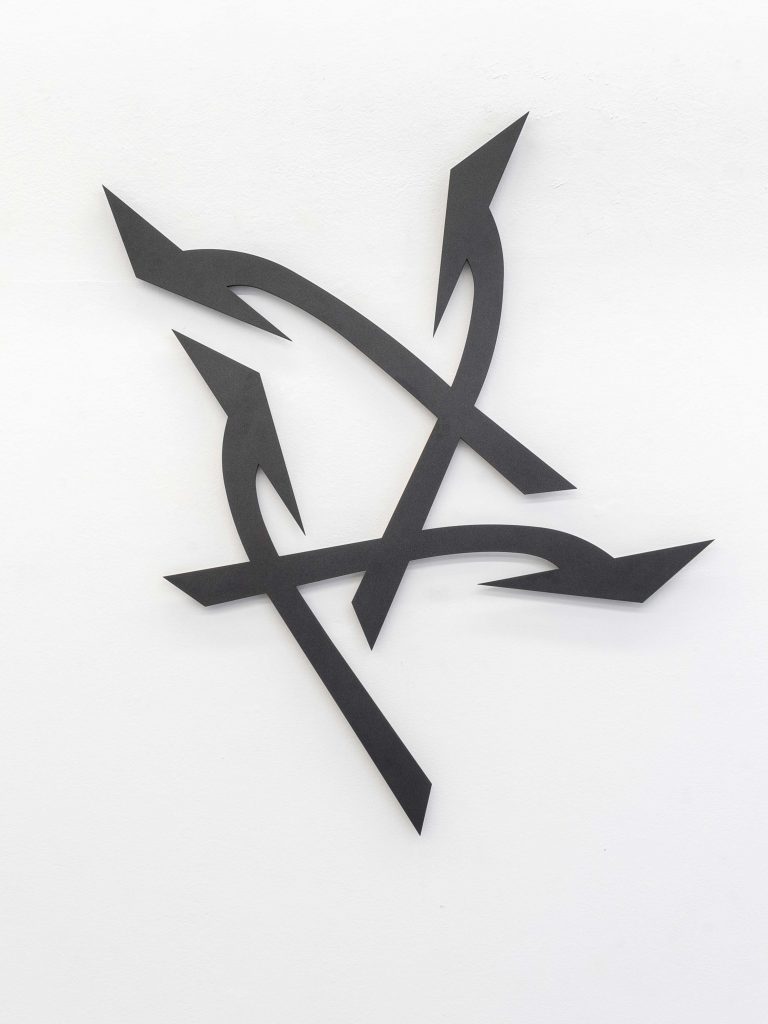 The Directions series continues the artist’s interest in the ordering structures placed in public space – as seen in other groups of works, including the sculpture series presented here Vertical Highways, which were shown for the first time at the Berlinische Galerie – Museum of Modern Art Berlin. The artist makes the sculptures from crash barriers, which she mechanically deforms and joins together to form upright works. The individual crash barriers remain recognizable even in their altered forms, and give an idea of the forces that have acted upon them. The anthropomorphic features and the monochrome colours merge the individual parts into a coherent new form. The vertical orientation of the normally horizontally crash barriers changes the usual spatial order and gives the sculptures an architectural reference. In the sequential use of the inceptive object lies a conceptual connection to Minimal Art and also a reference to the Readymades of Marcel Duchamp. 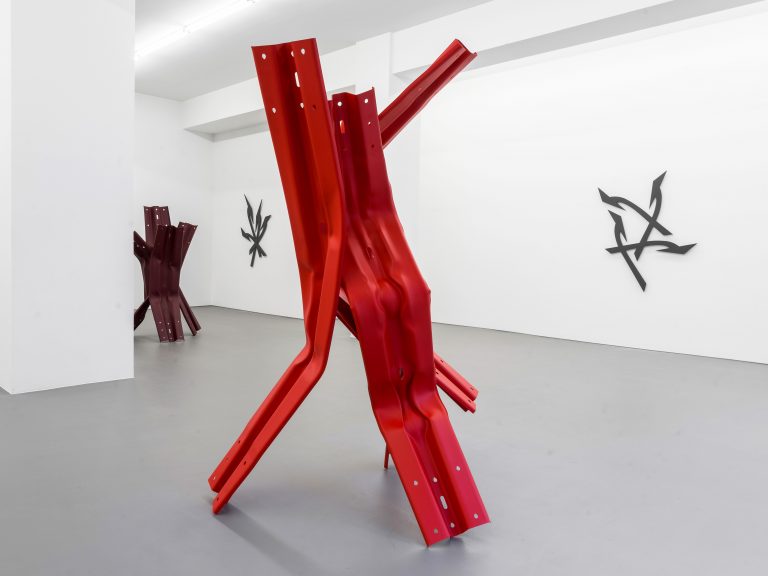 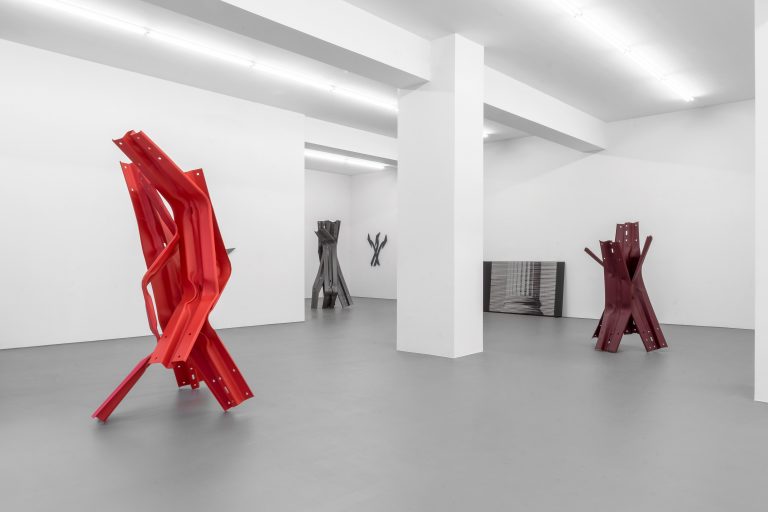 The photographic work Column shows in subtle contrasts the base of a monumental stone column almost life-size. As in her façade works, photography is used here on the scale of architecture. The work combines the artist’s interest in architectural structures, as seen in her photo installation Amplifier at the Konzerthaus Berlin this summer, with her independent photographic visual language. The placement of the elongated horizontal format on the floor and leaning against the wall gives the photograph the character of an installation.

In Paris in mid-October three sculptures from the Vertical Highways series will be presented prominently in the Jardin des Tuileries in front of the Musée du Louvre as part of the exhibition project Hors les Murs. A solo exhibition of Bettina Pousttchi’s work will open in December at the Arp Museum in Remagen near Bonn to mark the purchase and permanent installation of a group of the artist’s sculptures on the banks of the Rhine. 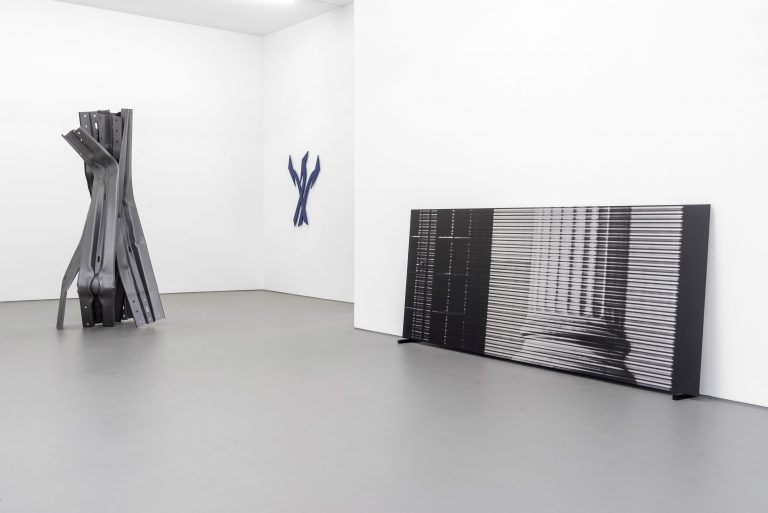 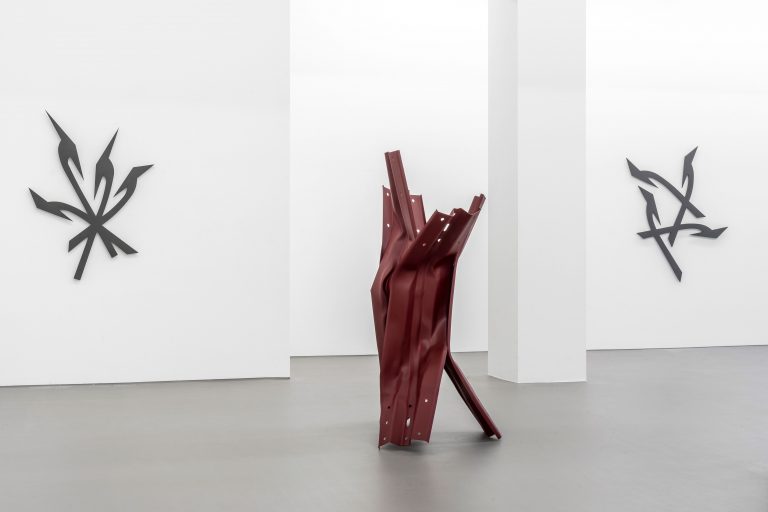 The exhibition was supported by Stiftung Kunstfonds / Neustart Kultur.

For Berlin Art Week and Gallery Weekend Berlin the Buchmann Galerie is presenting an exhibition in the Buchmann Box that juxtaposes some of Anna & Bernhard Blume’s best-known photographic works from the 1980s and 1990s with a group of new embroideries by British artist Des Hughes. 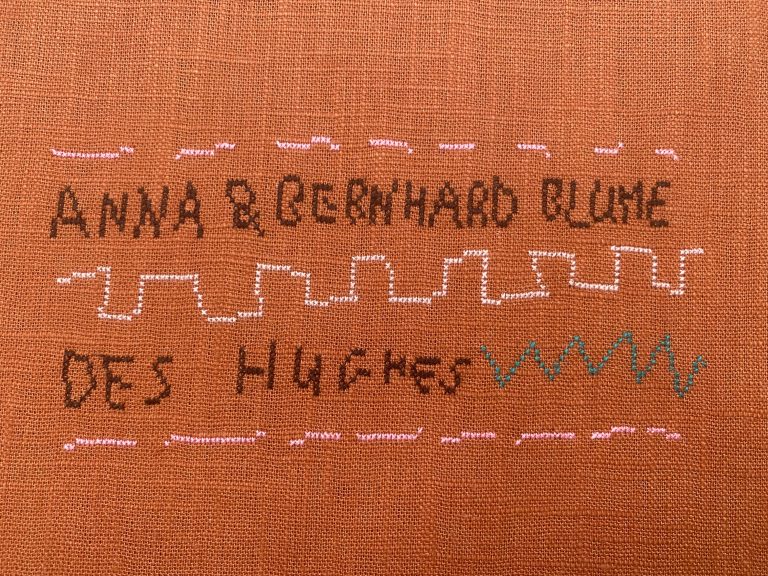 The three artists, who have never actually met in person, are usually attributed to quite different contexts, not only because of the media in which they work, but also because of their different generations. Nevertheless, surprising parallels between the two oeuvres can be observed in this exhibition, such as the ironic-critical questioning of (petit) bourgeois values and pseudo-esoteric ideas.

The artist couple Anna Blume (1936‒2020) and Bernhard Johannes Blume (1937‒2011) significantly expanded the genre of staged photography and are among its most internationally renowned representatives. In their black-and-white photo series, often consisting of several parts, the artist couple narrates staged sequences of time featuring themselves as the protagonists. With an impressive topicality, the artists deal with themes of identity, gender and class-specific taste. Deformation and metaphor, subjective perception and collective sets of rules are thematized and thus also touch on the question of whether the limits of the visible also set the limits of experience. 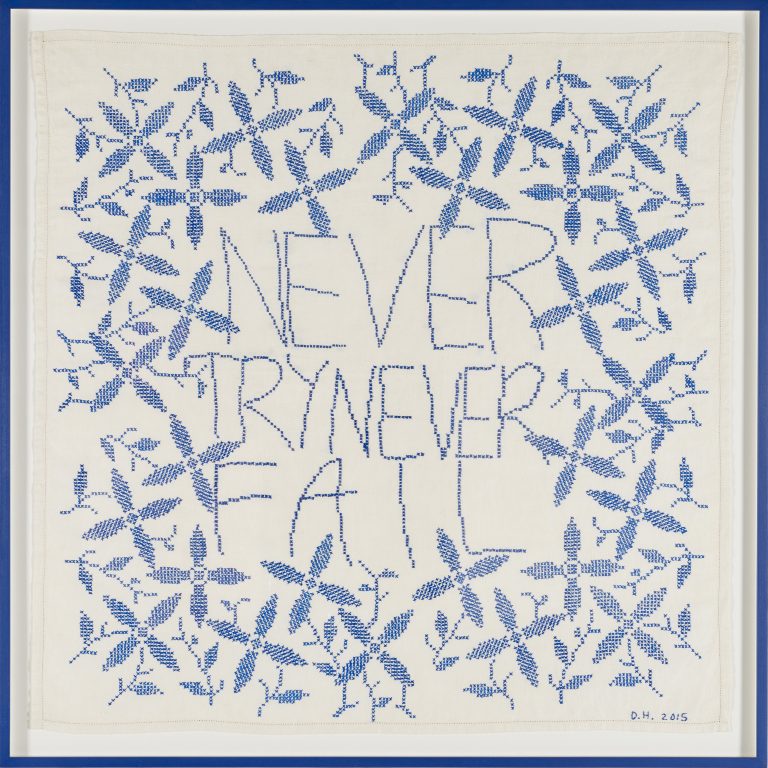 Moments of idiosyncrasy and whimsicality also characterize the work of the British artist Des Hughes (b. 1970), who combines writing and motifs in his embroidery works to create humorous and enigmatic pieces. Subversive and light-footed, they are reminiscent of the aphorisms of past generations that so essentially shaped the bourgeois self-image, yet deal with the hardships and entanglements of contemporary life. Ingeniously, the embroideries of Des Hughes evoke the repressed and the work ethic of contemporary life with its promise of transparency, as expressed in the eponymous work Never Try Never Fail.

We know the revenant of the motto as a digital meme, an ironic image‒text combination, mainly popularized by and widely shared on social media. Des Hughes’ embroidered work links the irony of meme culture with the handmade and homely, interrogating the role of gender ascription in what has been called handmade and homework. 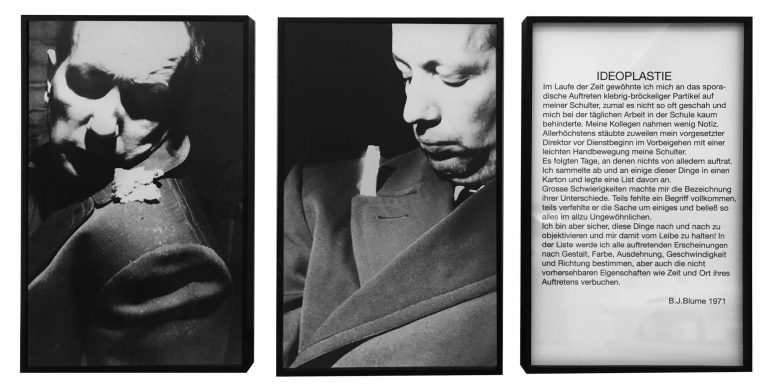